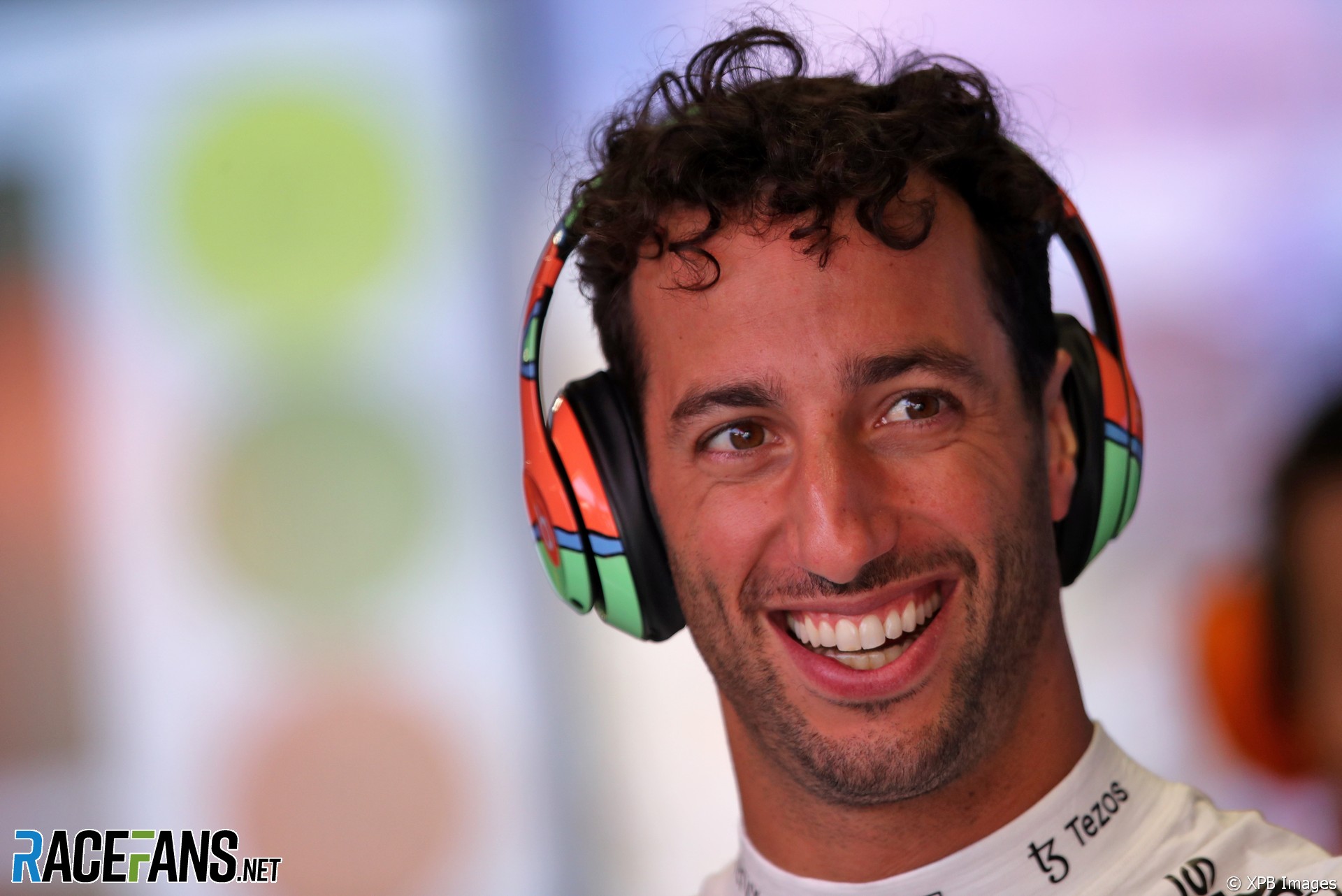 What Ricciardo gained from search for 2023 F1 role

After eventually deciding he wanted a reserve driver role in Formula 1 next year, having lost his race seat with McLaren, Daniel Ricciardo says he was warmed by his talks with Mercedes and Red Bull, who he eventually signed for.

“Once we connected with Red Bull, I was very appreciative of them giving me the time because they don’t owe me anything. So there was something there, and I felt it was – I was probably a little surprised, like they seemed as excited as me [about signing],” Ricciardo told the Australian Grand Prix podcast.

Although Ricciardo has returned to his old team, he confirmed it wasn’t the first time he’d looked at joining Mercedes. “Even when I was at Red Bull, Mercedes was always a team [to consider]. They were dominating, it was a team I was looking at.

“I had some conversations with them back in the day, and to have a few more now, it was nice. It was nice just to still be valued by some top teams after obviously the couple of years I’ve had.”

Ricciardo drove for Red Bull from 2014 to 2018, winning seven races and twice coming third in the championship. His subsequent moves to Renault and then McLaren resulted in only one win and two further podiums from the next four seasons. His substandard performances at McLaren led the team to end his contract with them a year early.

Red Bull junior Jehan Daruvala will be the reserve driver for Mahinda in Formula E next year, the first season of the championship’s Gen3 era.

The 24-year-old Indian is a significant signing for the team, which is Indian-owned and will have a home race for the first time in Hyderabad next February. Daruvala is expected to combine his FE role with a fourth season in F2 in 2023.

“To be a part of an Indian motorsport team is a dream come true,” said Daruvala. “FE is very competitive, and I am really excited about this new chapter of my career. Season nine promises to be very exciting with the all-new Gen 3 car and I am looking forward to learning and contributing, especially to car development and supporting the team.”

The 2023 Super Formula schedule has been revealed, with a reduction from ten races to nine for next season.

Fuji Speedway hosts the opening two races on the 8th and 9th of April, then two weeks later the first visit to Suzuka is made. Following that are races at Autopolis (21st May), Sportsland SUGO (18th June), Fuji (16th July) and Twin Ring Motegi (20th August) before the season concludes with a double-header at Suzuka on 27th-29th October.

The final race of the year will be the Japan Automobile Federation’s Japan Grand Prix.

'F2 racer Amaury Cordeel has been sentenced to a six-month driving ban in the police court of Dendermonde for a speeding violation in the Hogenakkerstraat in Temse. Cordeel and his lawyers dispute that he was driving at the time. The conviction is unlikely to have consequences for his F2 career.'

'Off the back of his monumental Formula 2 return for the season finale in Yas Marina and the post-season test, Juan Manuel Correa says he’s pleased to have maximised his track time to benefit both himself and Van Amersfoort Racing.'

'The 17-year-old from Guateng was one of the stars of the inaugural GB4 season, finishing second overall behind Nikolas Taylor, who took the title for Fortec.'

'With Ford Bronco values soaring in recent years, we’ve seen plenty of them garner lots of attention at auction, including everything from vintage first-gen examples to brand new sixth-gen SUVs, customized one-offs, and even nice versions of the much-maligned Bronco II. Now, we can add F1 legend Gilles Villeneuve’s personal first-gen Ford Bronco to that list, as it’s scheduled to cross the block at the upcoming Aguttes fall auction, which is set to take place near Paris, France on December 14th, 2022.'

The life and lifestyle of Bernard Charles ‘Bernie’ Ecclestone, a coffee farmer in Brazil (Forbes)

'The 2022 F1 season is fully baked, the formidable Red Bull driver Max Verstappen has claimed his championship, but the occasion of the Brazilian GP avails us of an opportunity to check in on the effervescent icon and former F1 supremo Bernard Charles Ecclestone, a hale 92, who attended the race and its run-up in Sao Paolo with his Brazilian wife, an FIA vice-president and ambassador for South America, Fabiana Flosi Ecclestone.'

Grazie Mattia. It’s been a pleasure to work alongside you to push the team and ourselves forward through thick and thin. Thanks for the great memories and moments we shared in and out of a racing track and all the best in your future endeavors! pic.twitter.com/0YcRfzTvUa

Mercedes has named the road leading into its #F1 team base Lauda Drive after three-times world champion Niki Lauda who was their non-executive chairman when he died in 2019.

"He was a massive contributor to our success and a great sparring partner," said team CEO Toto Wolff. pic.twitter.com/iBpp1LHhga

McLaren are organising a private test programme for Oscar Piastri prior to his F1 debut with the team next year, but all of his running will come in cars from the championship’s radically different previous technical ruleset. The outings will not impact McLaren’s cost capped budget, but running such a programme does still raise further questions.

Just out of interest I assume that all this testing and associated costs count toward a teams budget cap?

If so, does it count for this season or for 2023’s cap given the season is over.

Seems to me that they’re pouring quite a bit of cash into having someone drive a car that bears absolutely no relevance whatsoever to the current generation of their car and they run the risk of having their new driver totally confused by jumping into something that is wildly different to the one they’ve been training him in.
DB-C90

14 comments on “Ricciardo: “Nice to still be valued by top teams” after Mercedes and Red Bull talks”