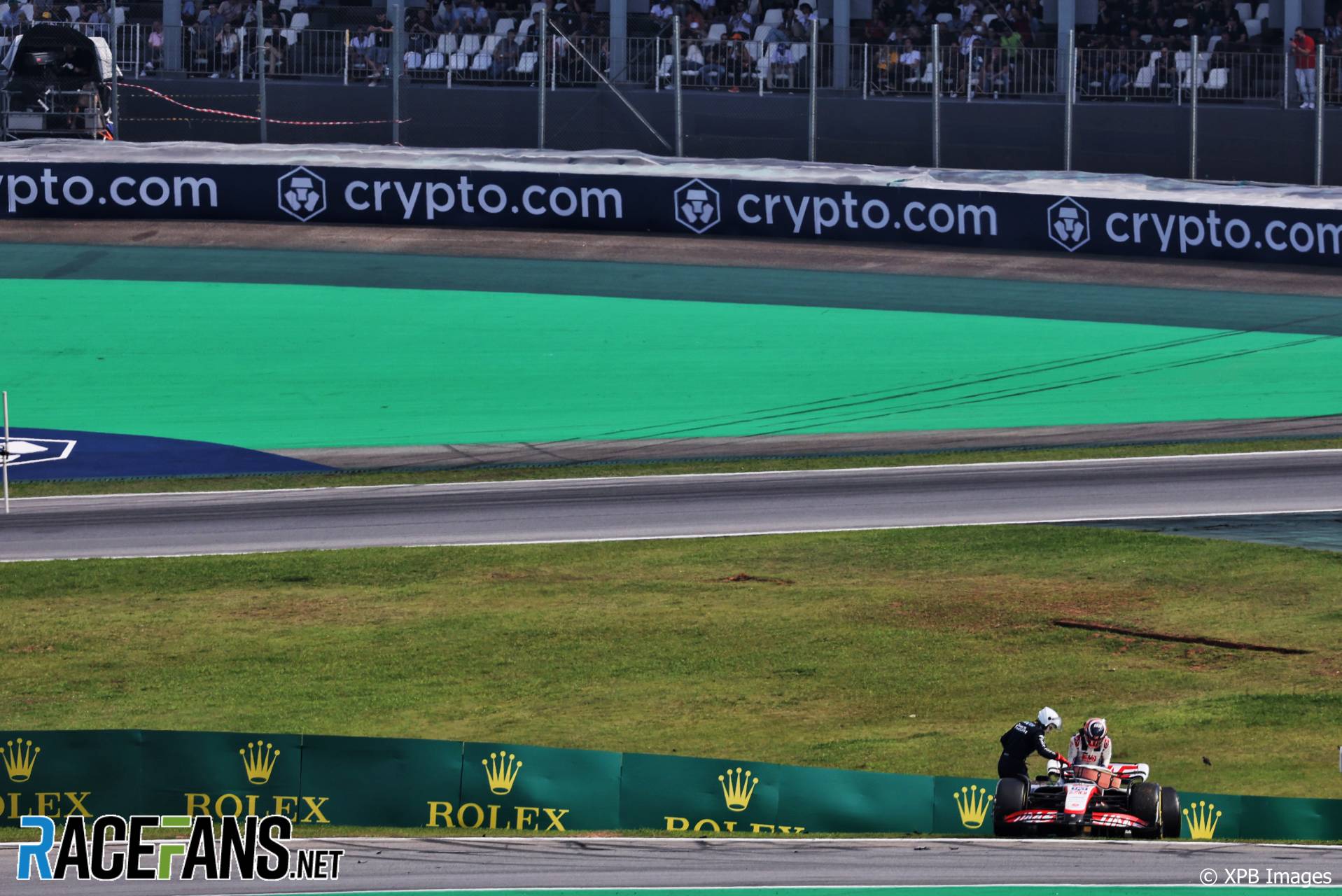 In the round-up: Kevin Magnussen revealed the bizarre ordeal he experienced trying to return to the Interlagos paddock following his retirement from the Brazilian Grand Prix.

Magnussen revealed marshals at the Interlagos circuit had to cut a hole in a fence so he could return to the paddock after he retired from the Brazilian Grand Prix last weekend.

The Haas driver started seventh in Sunday’s grand prix but was hit and spun on the opening lap by Daniel Ricciardo, putting both out of the race. However, Magnussen was not taken back to the paddock and was forced to sit in the infield and wait for the race to conclude.

“It was crazy,” Magnussen said. “I don’t know what went on, but it was the most dangerous thing I did all weekend – despite all the driving.

“For whatever reason, I didn’t catch a ride back to the pits. Daniel took me out of the race and then jumped in the Safety Car and took my ride back home to the pits and then I was left at the side of the track the whole race. I tried to speak to the marshals, but they didn’t speak a word of English – none at all.

“After the race, I was kind of waiting for someone to come pick me up or something and the marshals started leaving. And then I was like, ‘okay, what do I do?’. So I walked the same direction, but ended up by a fence that I couldn’t really see a way around. Of course, I could have walked the whole track and went around the start-finish straight, but there was all the fans. The marshals realised that I was in trouble and cut a hole in the fence and lifted me through the fence, which was kind of sketchy.”

Magnussen said he later received an apology from the event officials for their failure to collect him. “I’m glad I wasn’t Lewis Hamilton in Zandvoort, that would have been really sketchy,” he laughed.

Patricio O’Ward said he feared his Friday practice run for McLaren would be cut short by a technical problem on his way out of the pit lane.

IndyCar racer O’Ward participated in the first practice session in Abu Dhabi in place of Lando Norris. He completed 22 laps over the hour, but had to cruise back to pit lane on his very first lap out of the pits after his McLaren developed a problem.

“At that point, I was just trying to make sure my communications to the team were clear, because I was getting bounced around quite aggressively in the car,” O’Ward explained. “But I mean, I don’t have much experience, so I don’t know what that meant. I don’t think we knew at the time either.

“We kind of just came into the box and gave it a reset and that seemed to fix whatever was the issue. I’m not quite sure exactly what it was, I’m assuming it was something electrical – maybe a sensor or something. I was definitely like, ‘oh, I really hope it doesn’t get cut short’ because it was a very exciting time for me to get my first FP1 under my belt.”

Frontier Developments have confirmed that a heavily requested update to F1 Manager 2022 to rebalance DRS trains and allow lapped cars to un-lap behind the Safety Car will be released in “early December”.

Developers Frontier were criticised by players when they originally announced in October that they would cease issuing patches for the F1 management simulation game on all platforms just two months after its initial release. However, in response to the ensuing criticism, Frontier later announced they would continue to support the game and provide patches to address some of the most serious player complaints, including drivers getting caught in endless DRS trains and lapped cars having no ability to unlap themselves behind the Safety Car.

In an update posted on the game’s website, Frontier confirmed that a patch to address those faults is planned for release early next month.

Lewis Hamilton Reflects on His Next Step (New York Times)

"It’s going to be hard one day, stopping racing. I’ve done it for 30 years, and it’ll be 30-plus years when I do eventually stop. Luckily for me, right this second, it’s not now."

"W Series welcomes any initiative which shares our ambition to provide more opportunities for women in motorsport. Our objective from the start has always been to increase the talent pool of women racing drivers, and the addition of the F1 Academy as a feeder to W Series and other series is a further step in inspiring the next generation to progress up the motorsport ladder."

Sebastian on retirement, the fans, and his favourite sandwich (Aston Martin)

"You asked, now it's time for Seb to answer. Ahead of the Abu Dhabi GP, Simone caught up with Seb to ask him your questions from what's on his playlist, to which circuit he'd want to race backwards."

"It’s been tough knowing that as a team you’re not able to fight for points all the time, because that’s the expectation of all the teams and drivers on the grid. But I’ll park that frustration at the circuit gates as I leave after the race on Sunday afternoon. Instead, I’ll take away the memories of the good moments and the strong relationships and bonds that have been formed along the way. I know those friendships will continue a long, long way into the future."

"But in their focus on their own needs, and upon Hulkenberg and his suitability for an F1 race seat for the first time since 2019, did Haas fail to consider the impact that the lengthy decision process would have on Schumacher?"

"Ahead of his final race for McLaren, we look at our favourite fan-made Daniel Ricciardo creations."

"McLaren boss Zak Brown has bought Nigel Mansell’s title-winning IndyCar at auction for just shy of $1 million, adding yet another high-pedigree racer to his vast collection. The Lola T93/00 is fitted with a turbocharged, dual-overhead-camshaft Ford-Cosworth V8, which powered Mansell to four of the five wins in his successful 1993 campaign, as well as three pole positions."

"That he is a Chevrolet team owner in IndyCar could make Dreyer & Reinbold Racing an obvious landing spot for one of three NASCAR Cup Series drivers that have expressed interest in competing in the Indianapolis 500. Those drivers include Jimmie Johnson, Kyle Busch and Kyle Larson. All three drivers have won NASCAR Cup Series Championships and all three drive for Chevrolet teams in NASCAR."

Can’t get enough of each other 😂… another evening all together for the GPDA end of season meeting, also to say "see you later" to Mick, Nicolas and Daniel, and of course to make a special presentation for Sebastian #Vettel☝️ #RacingUnited #GPDA pic.twitter.com/kvP6YVeGAs

Alex’s happiness made my day. 🤍 pic.twitter.com/XL2dBChH3q

The man behind the wheel this morning. 👏

Hear from @PatricioOWard about his FP1 session and his time with the F1 team; watch the full video over on the McLaren App. 📲

P1 seen lots of stand in drivers. What is missed from the TV is the funny intercom discussions that would be happening as many get the names wrong in the heat of the moment. I was always pretty bad at this. #f1 #AbuDhabiGP pic.twitter.com/euTBH4xCmG

A head full of memories ✨

A one off helmet to celebrate my career so far, and my family who have supported it throughout ❤️

Thank you @StiloOfficial and @mdm_designs for getting this project together.

Updated @FIAFormulaE rule book for 2023 is out and, sure enough, one of the worst rules ever seen in motorsport has been expunged. #Fanboost pic.twitter.com/8o1nxQNMeB

With Formula 1 planning to trial activating DRS one lap sooner in sprint races next season, @f1frog is of the view that overtaking is already too easy in 2022 as it is…

DRS is really never going to go away. I don’t understand why we are trialling more DRS when the new aero rules have reduced the need for it.

In my opinion, overtaking has been too easy this season, and we should be reducing the use of DRS for 2023 with the aim to drop it at least by 2026 if not before. An example would be in the Brazil sprint race. Obviously it would have been incredibly difficult for Kevin Magnussen to win that race, but I think, under the current rules, it would have been impossible in a clean race. Even if Gilles Villeneuve had been driving the Haas, there is no way he could have taken the win by driving perfectly and holding everyone off, as he did in Jarama in 1981, he would just have been overtaken on the main straight by Verstappen with his rear wing wide open. And that is not a good thing.

Similarly, in Spa, Verstappen was able to drive from the back to the front in a quarter of the race. Undeniably, he was outstanding that weekend and deserved to win, even from where he was, but DRS just made it too easy for him, and qualifying has seemed a lot less important this year as a result. DRS was absolutely necessary for getting any overtaking under the previous aero rules, but now it makes it too easy.

In my opinion, the perfect situation would be no DRS at all, but also the car behind being in no way affected by turbulence from the car in front. For 2023, I would suggest DRS should be kept, but only on the shorter straights, never on the long ones, apart from in tracks like Monaco and Singapore. They should also announce at the same time that there will be no DRS at all in 2024, giving the teams a year to design the cars around that fact. But it won’t happen, DRS will stay indefinitely.
F1 frog

Happy birthday to Joao and Matteo!