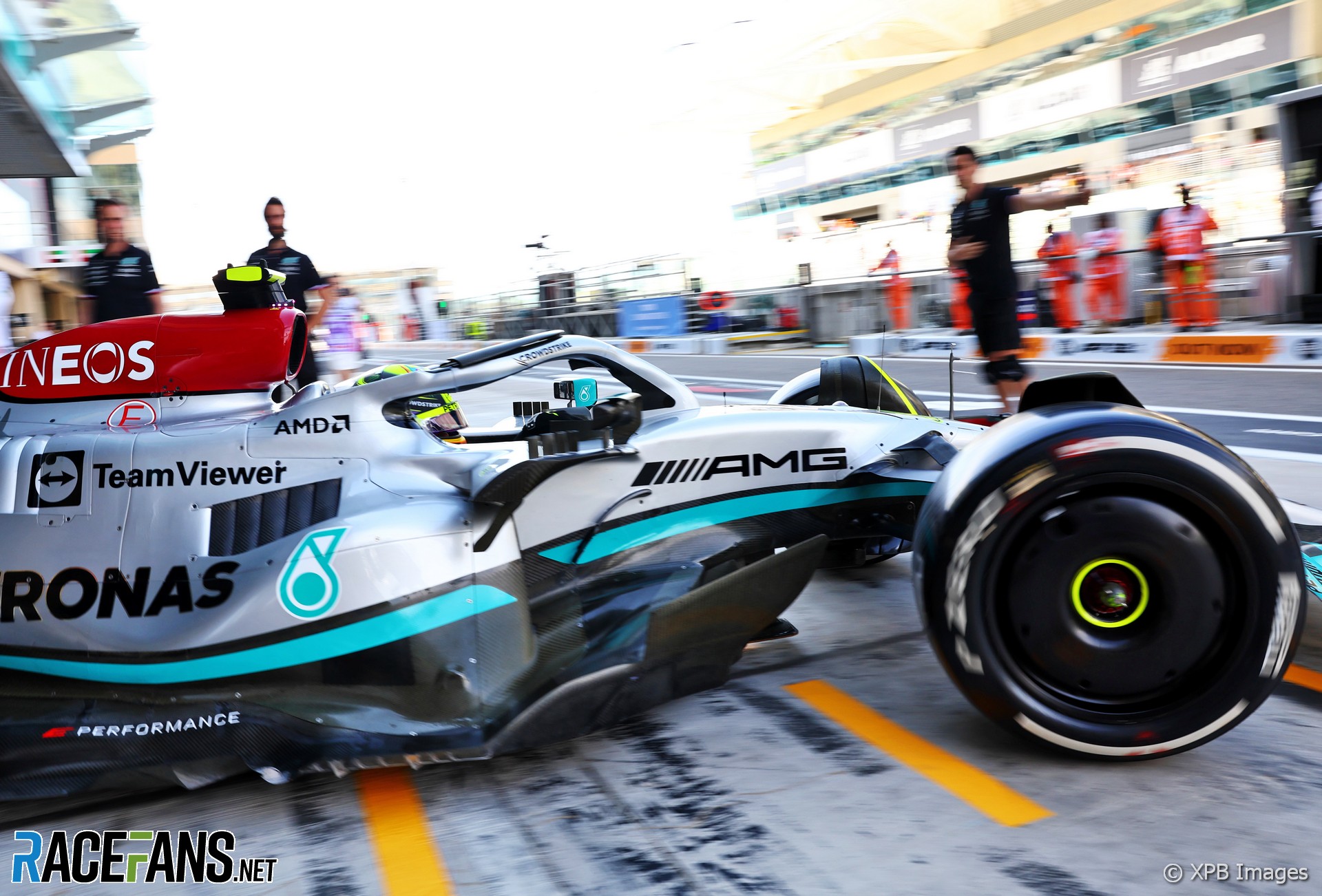 Lewis Hamilton set the pace in the opening practice session of the Abu Dhabi Grand Prix weekend ahead of team mate George Russell.

The two Mercedes drivers were fastest from Charles Leclerc and the two Red Bulls of Sergio Perez and Liam Lawson, who stepped into Max Verstappen’s car for the opening hour.

The final first practice session of the season was also the one that featured the most guest rookie drivers, with Formula 2 champion Felipe Drugovich getting his first run out in a 2022 Formula 1 car in Lance Stroll’s Aston Martin. IndyCar driver Patricio O’Ward got a chance to drive Lando Norris‘ McLaren with Pietro Fittipaldi stepping into Mick Schumacher’s Haas. Liam Lawson got a chance to drive Max Verstappen’s Red Bull, Robert Shwartzmann took over Carlos Sainz Jnr’s Ferrari, Jack Doohan was handed Fernando Alonso’s Alpine and Logan Sargeant got another run in Nicholas Latifi’s Williams. Finally, veteran Robert Kubica got his final run out of the season in Zhou Guanyu’s Alfa Romeo.

When the session began, O’Ward immediately reported a problem with his McLaren on his first lap out of the pits. He was brought in at the end of his out lap while McLaren worked on a fix in order to get him out onto the track. Eventually, after 20 minutes in the garage, O’Ward was sent out onto the circuit for his first genuine run.

Perez set the initial pace on the soft tyres with a 1’28.159, just over half a second quicker than Leclerc’s Ferrari. Lawson used the hard tyres to move into third position, six-tenths slower that Perez’s best on the softs, until he was replaced by Sargeant’s Williams on soft tyres.

Sargeant briefly brought out the yellow flags at turn one when he spun under braking, looping his Williams around 360 degrees and ending up with his nose lightly pressing the barrier. After reversing out of the barrier, Sargeant recovered to the pits with only his tyres appearing to have suffered damage. He was sent back out onto the track shortly after.

Alexander Albon went fastest for a moment with the soft tyres, until his best time was beaten by Valtteri Bottas and then by Perez, who improved to a 1’26.967. Leclerc beat Perez’s time by less than a tenth of a second to go quickest, before Hamilton used a fresh set of soft tyres to set the new fastest lap with a 1’26.633. Mercedes team mate Russell could not match his team mate’s time on his push lap, but was still quicker than Leclerc and Perez to move into second place.

The chequered flag signalled the end of the session, with Hamilton head a Mercedes one-two at the top of the times. Leclerc ended the session third fastest, less than half-a-tenth behind Russell, with the two Red Bulls of Perez and Lawson fourth and fifth. Sebastian Vettel was sixth fastest in the Aston Martin, ahead of Shwartzman in the second Ferrari. Daniel Ricciardo, Bottas and Albon rounded out the top ten positions.