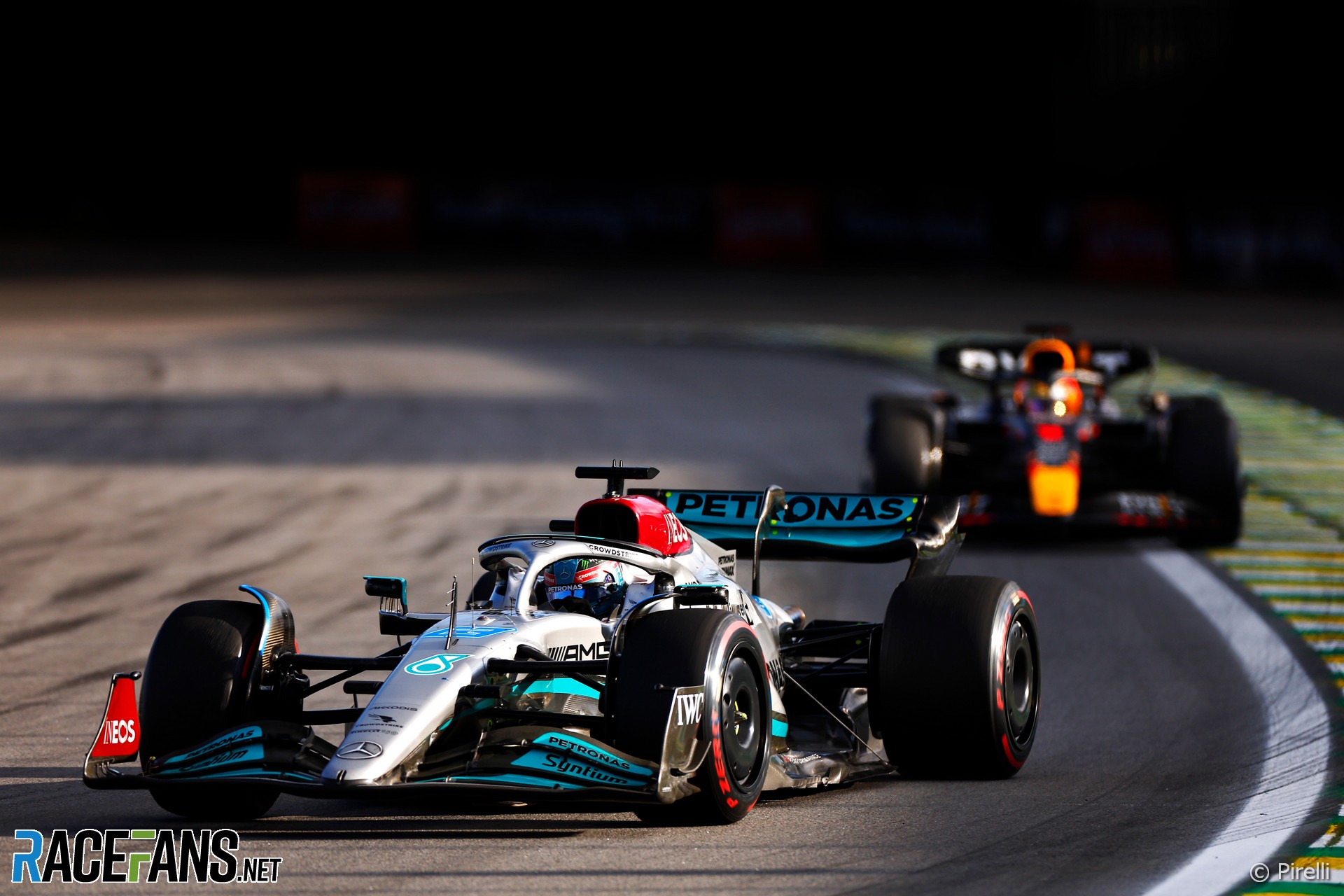 Mercedes’ win-less streak is over. Technically. After 20 grands prix and three sprint races, George Russell did what he and Lewis Hamilton had previously failed to do all season – take the chequered flag first during a race session in 2022.

Crucially, Russell’s sprint race win was down to him being the quickest on the track. It was not won by default – a gift from Red Bull with a mechanical failure or a crash involving cars ahead. Russell passed surprise pole-winner Kevin Magnussen, then chased down Max Verstappen. After three attempts to get by, the lead was his, and with that soon followed the victory and pole position for today’s grand prix.

For the first half of the sprint race, Verstappen appeared to have the race under control. He was the only driver, aside from Nicholas Latifi, to choose the medium tyre compound. Once he slipped by the Haas to take the lead, Red Bull could have expected the champion to keep a steady pace until the end for a comfortable win. That did not happen.

Red Bull team principal Christian Horner explained the team’s choice was based on their doubts about the soft tyres, rather than being sold on the mediums.

“We felt that the soft was limited in range so we took the decision to start on the mediums, thinking if we could survive the first half of the race, we would be alright,” Horner explained.

“However, when we got there, we found we were suffering worse degradation than anticipated. To add to that, Mercedes had a quick car today and those two factors meant we couldn’t hold them off.”

Russell admitted the call to start on softs was not as obvious as it may have seemed. “I think it definitely wasn’t clear-cut,” he said in the press conference following yesterday’s race.

However Russell suspects Verstappen’s sprint race strategy could have earned him an advantage for the grand prix.

“I think we’ve all recognised that the soft was probably the best-performing tyre this weekend in the race, which is quite odd. Obviously that means if you use the soft today, you’ve got one less tomorrow. So even though Max and Red Bull didn’t have a strong race, they’re probably in a slightly better position than the three of us going into the race tomorrow as they’ve got that one extra set of new softs.”

The weird race weekend schedule caused by the sprint races mean second practice becomes more reflective of potential race pace than usual. Russell was quicker in that session than Verstappen, the Mercedes’ first push lap on softs quicker than the Red Bull’s. But what was telling was how their performance varied through the lap.

Naturally, Verstappen enjoyed a large top speed advantage over the Mercedes, even with both forgoing DRS. But Russell gained plenty of time back on the exits of corners, flooring the throttle earlier than the Red Bull did. If Russell has to defend from Verstappen in the grand prix, that seemingly superior traction could be crucial.

Even if Russell and Hamilton keep their one-two on the grid intact in the earlier laps, they will be wary of Verstappen holding an extra set of softs in reserve. Not least because of how much better the softer rubber appeared to perform in the sprint race.

“The advantage is we go into tomorrow’s race with an extra set,” Horner recognised after the sprint. “So what we gave up strategically today we get back tomorrow.

“Mercedes will be quick, they will drive a tactical race and its two Red Bulls against two Mercedes with Ferrari thrown in. It sets up a fascinating grand prix.”

While Mercedes have flirted with victory occasionally in the second half of the year, Sunday presents them their best chance of converting a first win of the season. However, the memories of Mexico and the USA – where Mercedes’ strategy did them no favours – hang over them. Russell expects the team will try to cover both options in the race.

“I think as we saw in Mexico that we both did the same strategy and ultimately it affected us both,” Russell explained. “Sitting here right now, we probably don’t know what the right strategy is going to be.

“We’ll race each other fairly, for sure. And I’m sure we’ll probably be splitting the strategies tomorrow to try and cover all options – hopefully one of us comes away happy tomorrow. But I think we, we both recognise based on recent experience, we’re probably going to have to go two separate ways.”

With Hamilton lining up alongside his team mate on the front row, Mercedes hold the advantage. That begs the question whether Mercedes will enforce team orders to maximise their hopes of winning.

“There definitely won’t be any team orders,” pole winner Russell insisted. “But I think between the two of us we will definitely be strategic to try and get that win for the team.”

For the first time, Hamilton is staring down a win-less season in his Formula 1 career. But, tellingly, his focus appears to be on a Mercedes victory regardless of whether it’s him or his team mate who takes it.

“I think I’ll just say that getting a one-two either way, I’m going to be a happy person,” Hamilton said. “Just because of how hard everybody’s worked.

“George has done an amazing job this year and he’ll be pushing for that win – but we’ll, of course, drive carefully and clean. We’ve just always got to just have at the front of our mind, it’s the team – Getting the result for the team. But of course, individually, we’ll do our best to try and get the best result.”

Should Mercedes race pace be maintained over the 71 laps of the grand prix, Verstappen knows he could have a genuine fight on his hands. Despite his tactical advantage of a second set of fresh softs.

“Even on the softs, we wouldn’t have been fast enough,” Verstappen explained. “We were clearly struggling on keeping the tyres alive, so this is something we need to try and fix for tomorrow. Even though there’s not a lot you can do. But it can’t get worse than this.”

Having won 14 races this season, Verstappen has every reason for confidence. And yet, it seems this is the first time all year he may genuinely have find a way to overcome two Mercedes to reach the chequered flag first.

“At the moment, they look unbeatable,” Verstappen conceded.

Are Mercedes finally quick enough to claim their first grand prix victory of 2022? What role will Ferrari play in the fight at the front?

Share your views on the Brazilian Grand Prix in the comments.

13 comments on “Will Verstappen’s tyre advantage allow him to defeat “unbeatable” Mercedes?”