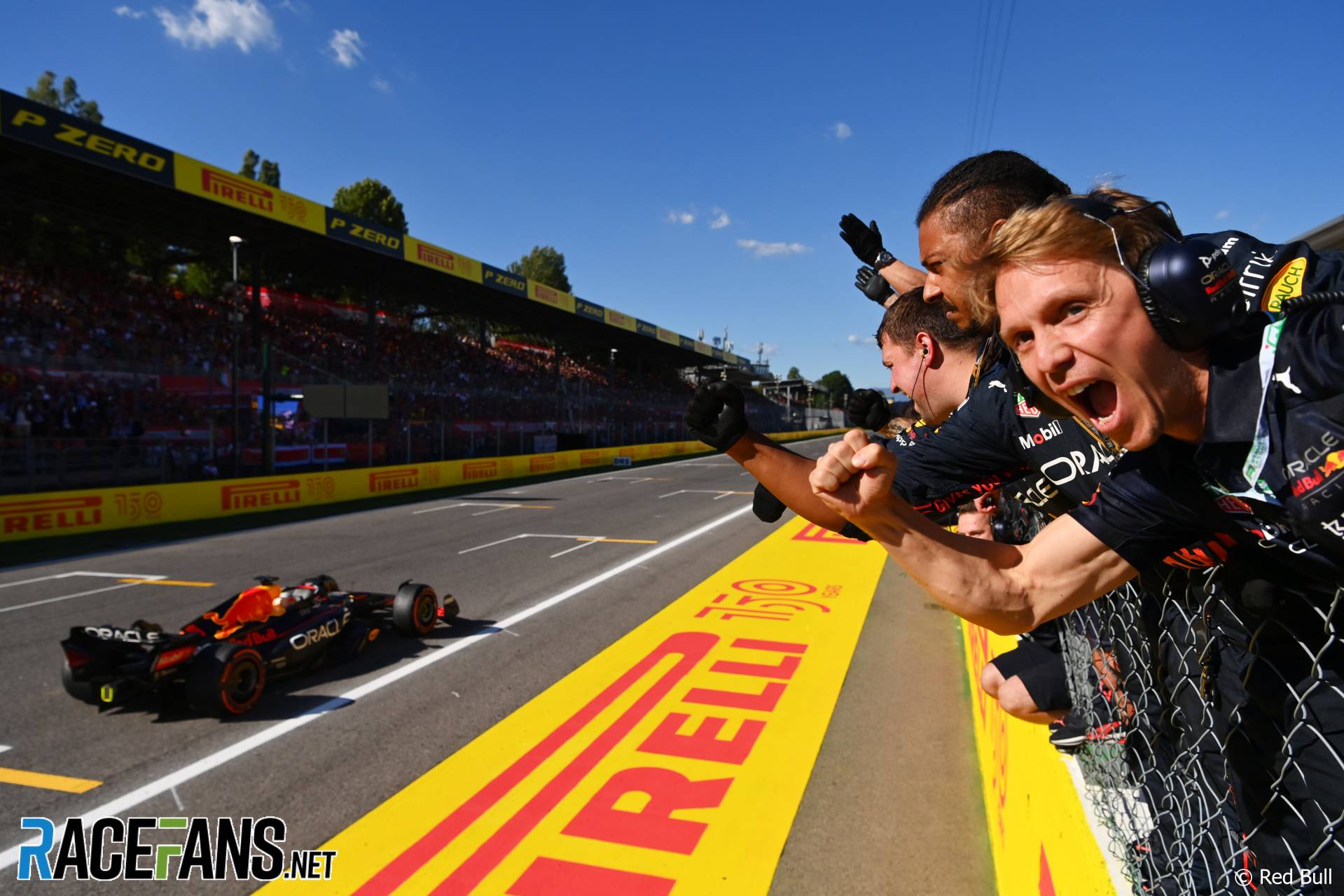 Max Verstappen won the Italian Grand Prix at Monza ahead of Charles Leclerc as the race ended behind the Safety Car.

When the lights went out, Leclerc led away down to the Rettifilo chicane but came under pressure from Russell’s Mercedes around the outside. Russell took to the inside runoff at the chicane and hopped over the kerbs to move into the lead, but immediately yielded his illegitimate position back to Leclerc. Behind, Verstappen gained three places on the opening lap, then passed Daniel Ricciardo’s McLaren to move into third on the second lap.

By the fourth lap, Verstappen was well inside DRS range of Russell in second. Verstappen slipstreamed the Mercedes down the pit straight at the start of lap five and pulled to the inside under braking of the Rettifilo chicane to take the place. Having started from near the back, Sergio Perez was the first to pit at the end of lap seven, but rejoined with flames licking from his right-front brakes. However, he continued on his way on his hard tyres with Red Bull choosing not to pit him again.

As the three leaders pulled away, fourth-placed Daniel Ricciardo became the cork in the bottle as the field followed behind the McLaren. Sebastian Vettel pulled off the circuit at the exit of the second Lesmo with a smoking Aston Martin, bringing out the Virtual Safety Car. Ferrari pitted the leader for medium tyres under the VSC, which ended on his way out of the pit lane. Fortunately, he managed to rejoin just ahead of Russell and the train to retain third position as Verstappen inherited the lead.

Having started from 18th place, Carlos Sainz Jnr eventually passed Ricciardo to move up into fourth behind his team mate soon after the race resumed. With clean air and fresh tyres, Leclerc began steadily catching Russell ahead of him, while Verstappen pulled out a gap of ten seconds over the Mercedes behind.

Russell was the first of the leaders to pit at the end of lap 23, switching to the hard tyres and rejoining behind the two Ferraris in fourth place with Sainz yet to stop. Verstappen followed suit two laps later, but switched to mediums, allowing Leclerc to move back into the lead. Verstappen emerged with a 10 second deficit to the Ferrari, but with 14 lap younger tyres than the leader.

Verstappen began to eat away into Leclerc’s advantage. When it was almost at five seconds, Ferrari called the leader in at the end of lap 33 for soft tyres for the final 19 laps. Leclerc emerged just ahead of Russell to hold second place, but with a second a lap to make up on Verstappen in order to catch the leader.

Despite switching to theoretically quicker tyres, Leclerc struggled to make any gains on the leader as Verstappen went even faster out front. The Red Bull driver remained comfortable out front and appeared to be on course for victory, until Ricciardo suddenly pulled off to the side of the road between the two Lesmos, bringing out a late Safety Car on lap 48.

All four front runners pitted at the reduced speed for soft tyres, keeping their positions. Despite six laps behind the Safety Car, Ricciardo’s car was only cleared with two laps remaining. With some of the field still recovering to the back of the Safety Car queue and some lapped cars still between Verstappen and Leclerc, the race finished under Safety Car.

Verstappen therefore took the chequered flag to claim his fifth consecutive victory, with Leclerc second and expressing his frustration that the race was not resumed. Russell completed the podium in third, ahead of Sainz and Lewis Hamilton in fifth.

Perez finished sixth, ahead of Lando Norris and Pierre Gasly in eighth. Debutante Nyck de Vries finished ninth to score points in his first grand prix ahead of Zhou Guanyu, however a bizarre incident where De Vries appeared to slow down suddenly at Curva Grande behind the Safety Car, causing Zhou to slam on his brakes, has been noted by the stewards.