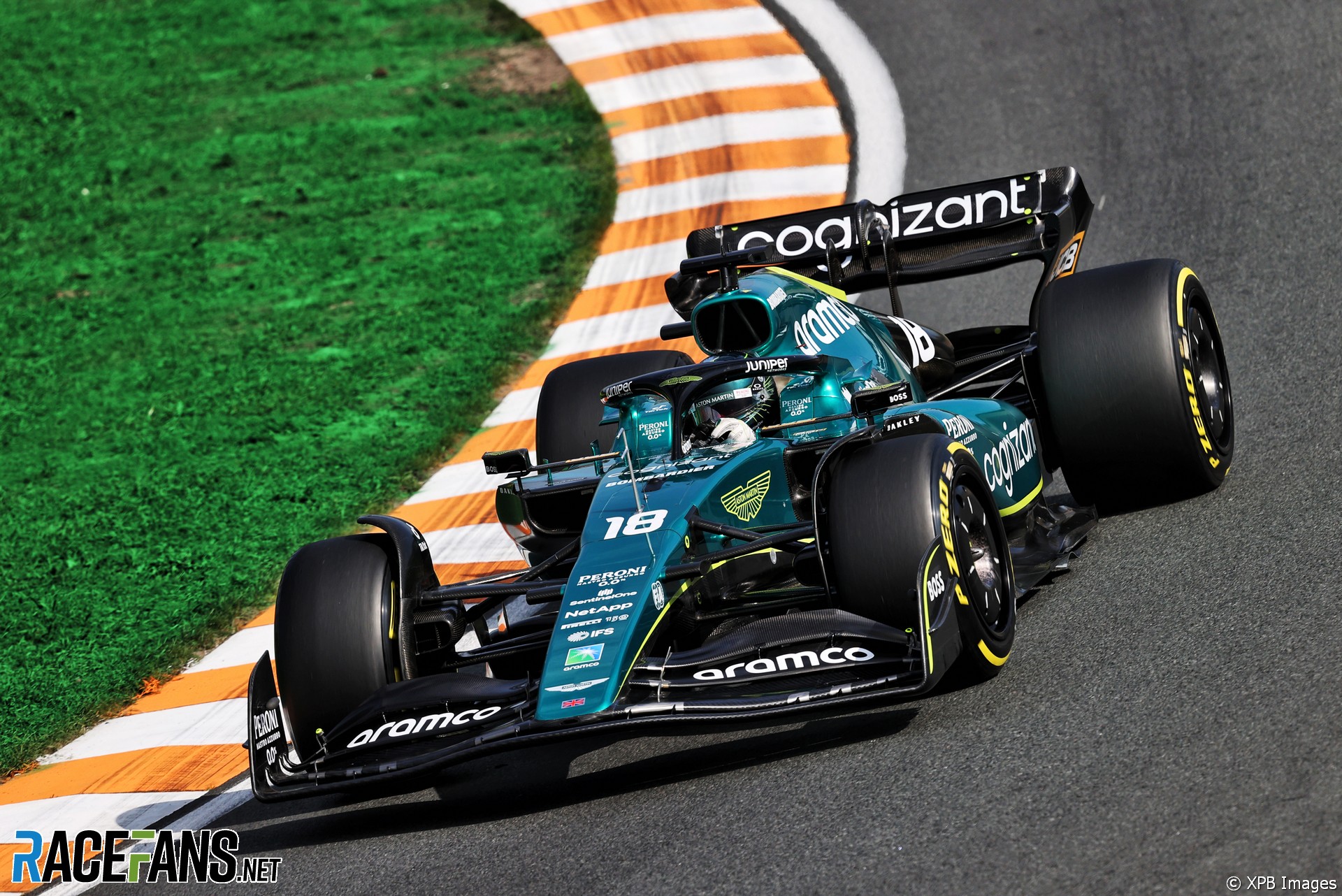 In the round-up: Lance Stroll believes he could have qualified as high as seventh on the grid at Zandvoort had he been able to take part in Q3

Lance Stroll believes he could have qualified as high as seventh on the grid at Zandvoort had he been able to take part in Q3.

The Aston Martin driver comfortably progressed into the final phase of qualifying but failed to complete a lap after the team discovered a problem with his car in the garage, leaving him tenth on the grid.

“It was a hydraulic issue,” Stroll confirmed.

“We’ve got to look into it. The main thing is it’s a bit frustrating we didn’t have that shot in Q3. I think here is such a track position race that it’s nice to really try and climb up as far as possible. And I think there was a P7 or P8 in the car.”

Juan Manuel Correa scored a second place finish in the FIA Formula 3 sprint race at Zandvoort, his first since returning to racing following a long recovery from serious injuries.

Correa suffered severe fractures to his lower legs, as well as other injuries, in the 2019 Formula 2 Spa crash that led to the death of Anthoine Hubert. His condition meant he was placed in a medically induced coma to ease his initial recovery and he underwent over 100 surgeries to fix fractures and muscle damage.

Correa returned to racing in 2021, scoring five points finishes in F3. Coming second at Zandvoort marks his best placing since the accident.

He said that “it feels very special” and that although he could be disappointed with second from partially-reversed grid pole, the result had been well-deserved after thwarted chances.

“Of course, I would have loved for it to be a win,” said the ART driver. “I think we were close but Caio [Collett] had a little bit too much for us today, but nonetheless, I think is a long time coming this year.

“We’ve been close, we’ve been a bit unlucky and the season was cut short with a fracture. So to come back and to be competitive in the last few races was our goal. So I’m happy about it and yeah, very emotional. Also, Zandvoort it is a very special event, an incredible track. So I’m thrilled to be here.”

Daniel Ricciardo explained that dirt on the track kicked up by a rival car left him unable to improve his final qualifying lap, leading to his Q1 elimination.

The outgoing McLaren driver was knocked out in 18th in Q1, half a second slower than team mate Lando Norris in fifth. Onboard footage showed he passed through a dust cloud at turn 13 on his final lap of the session.

“The lap was decent,” said Ricciardo. “It was trending to be good enough to get me through.

“But [Lance] Stroll dropped a left rear on the entry of 13, I think, and brought a lot of dirt on the track, so I basically lost all the time there. And I think [Sebastian] Vettel was just behind me and actually he spun for the same reason and I think Lando was then two cars behind and he even lost some time as well. From what I was told. So basically that was where the lap got away.”

"If such a can hits you, it could have lethal consequences. The halo wouldn’t help you in that. We looked at the camera angles and Lewis was going through the pit lane when it happened. I don’t know if somebody threw it at him but it happened before he actually was at that point. I hope that the organisers get a grip on it with the security."

"I come from a family of artists and my dad collected classic cars. So for me, it’s a basic combination. I combined all those elements to create one art piece. Such a graphic award as this has not been seen before. I wanted a new, fresh energy."

"I love being with the team at Grands Prix; I use it as an opportunity to help wherever I can – providing another perspective based on things I might have seen at the track or learnt prior to the weekend. There are only two drivers, so the more eyes on the circuit and the more experience of the track, the better."

"Hamilton has a close business relationship with Sir Jim Ratcliffe, who has expressed an interest in a takeover of United. The club's current owners, the Glazer family, are widely disliked by the club's fanbase due to a range of issues."

"Synthetic fuel has a role to play somewhere – perhaps in aircraft. But the development effort Audi will be putting in for its Formula 1 program in 2026 looks like it will have value only in motorsport, whereas what companies like Jaguar learn from Formula E is likely to have much wider applications in the cars most people will be driving every day in the years to come."

Thrilled to be on pole position for my home race, especially after yesterday. We worked hard overnight and recovered really well, thank you @redbullracing 💪

A Qualifying lap around Zandvoort is insane and the support of all the fans has been amazing all weekend, thank you 🙌 pic.twitter.com/y8SBrbjaUQ

It’s a pity the mistake on my last lap, but tomorrow we will do everything to recover.
5th on the grid, from there we can fight! 💪 #nevergiveup #DutchGP

Q2 🐦🐦 but not fast enough for more today, let’s keep working as a team to get the car up there!#DutchGP #TeamZHOU pic.twitter.com/cV28kjwoUR

With 80% – maybe more – of the 104,000 race fans already decked out in orange or RB gear, sales are a bit leisurely. #ZandvoortGP pic.twitter.com/HNxwQkxnZN

P2!! 🏆 and first podium since my comeback. We all know who this one is for 💙❤️ pic.twitter.com/lUXQCY4XBe

What a warrior @JMCorrea__ is. Three years ago he dragged himself clear of his car with horrific injuries. For him to even compete again is incredible, to stand on the podium on a Grand Prix weekend… it's a sporting comeback for the ages.

Imagine paying to go and watch a live sport.

Then throwing something on the ‘pitch of the sport’ so the sport you came to watch is stopped.

And you can’t watch it.

With the Las Vegas GP circuit undergoing minor amendments to add more corners towards the end of the circuit, some racing fan offers this explanation.

The only reason I can think of is that there isn’t enough run-off area on Sands Avenue because the elevated Las Vegas monorail is situated right in the middle of it in that specific spot. Other than that, disappointing.
some racing fan