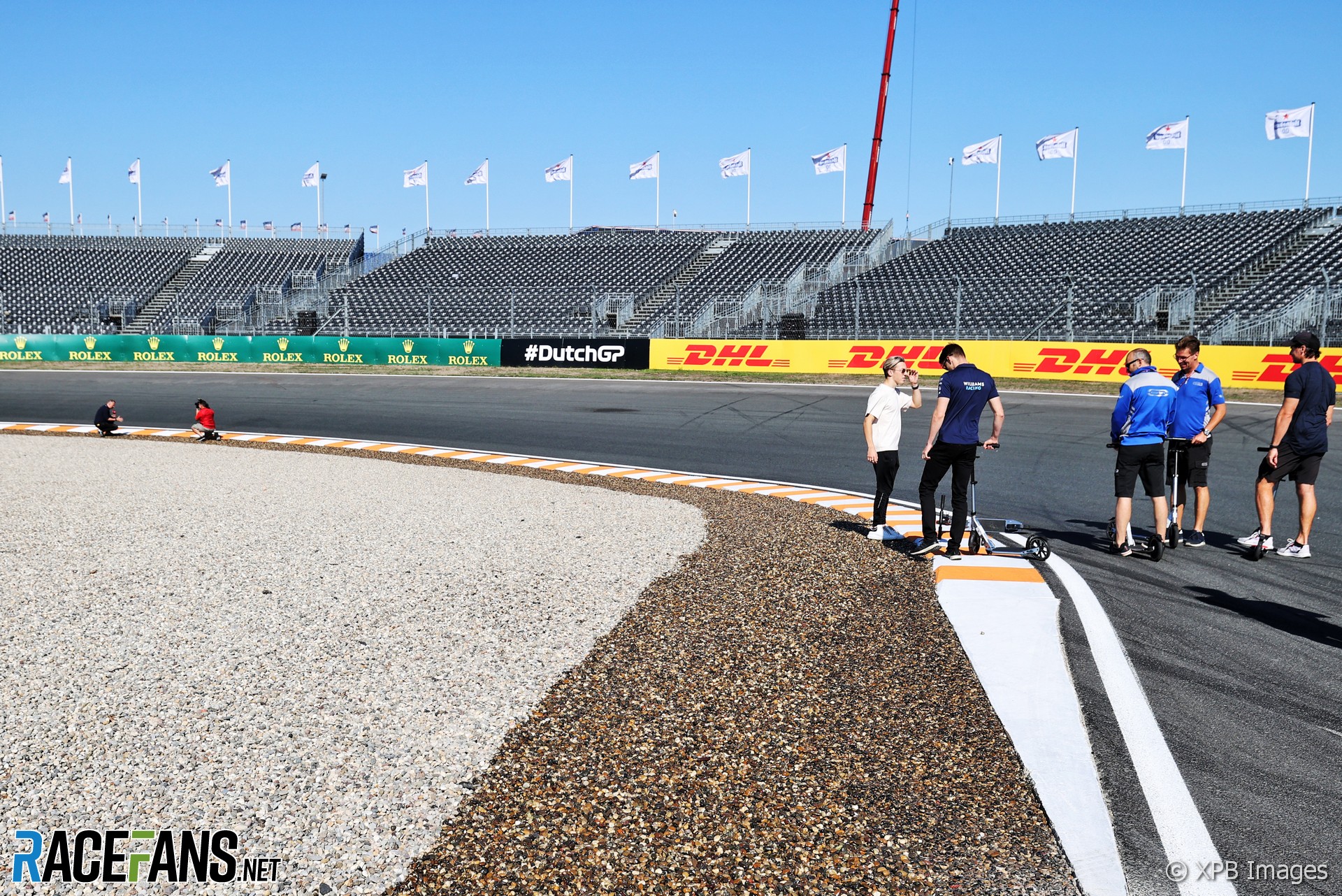 Some of Zandvoort’s gravel run-off has been permanently stuck to the ground ahead of this weekend’s Dutch Grand Prix.

Usually gravel is a loose surface layer, with masses of small rocks, pebbles and sand distributed by trucks onto the spaces around a race track.

Due to it being loose, when drivers run through a gravel run-off area they can then bring some of the stones and the sand back onto the asphalt, making it less grippy and therefore increasing the chances of other drivers sliding into the gravel.

To reduce the chance of this occurring, the Zandvoort circuit has treated a one-metre wide border at turns 11 and 12 with an epoxy resin, adhering the gravel to the ground beneath. Its roughness means it will still slow cars down, but it means drivers are less likely to bring stones back on to the track once they rejoin.

This is another method that has been used in Formula 1 this year to discourage drivers from exceeding track limits. Spa-Francorchamps, host of last weekend’s Belgian Grand Prix, brought back gravel traps in several areas where there had previously been asphalt run-off, a move that F1’s drivers assessed had made a positive change after racing at the updated track.

“[At] turn one in Spa, everyone was well-behaved because there was gravel,” said Daniel Ricciardo. “So I like gravel.”

Much of Zandvoort’s track layout, due to being located on the soft ground of a sand dune and therefore being more prone to long-term movement, is built on raised pieces of ground and means there are dips at either side of the asphalt on many straights and the non-banked corners where grass – and now gravel – lies. This also discourages drivers from dropping a wheel off either side of the track, and a hot and dry summer means the ground will also be harder and bumpier than in 2021.

Formula 3 driver Victor Martins believes fixing the gravel in place at turns 11 and 12 will reduce the disruption during sessions.

“I think it will be a good idea to do that because last year was just a mess, to be honest. In that corner with the gravel always when you were coming, lap after lap, it was the same.

“One lap you were able to to keep the line, the lap after you were losing two or three things because you were the first one to arrive in that corner with the gravel on it. So we will see. I think there will be margin for us to not put too much gravel on on the track.”

However he is concerned some cars racing this weekend, such as the Porsche Supercup competitors, may be able to lift the gravel from the track apron. “I don’t know if it will be solid,” he said. “[They] might remove a bit. So we will see how it will stay like that.

“But if it is staying like that, then I think it’s a good idea to make it because I don’t think you can gain an advantage by going there, and at the same time it doesn’t disturb the racing line. So we will see. For sure, if there is no red flag because of that, it will be a good idea.”