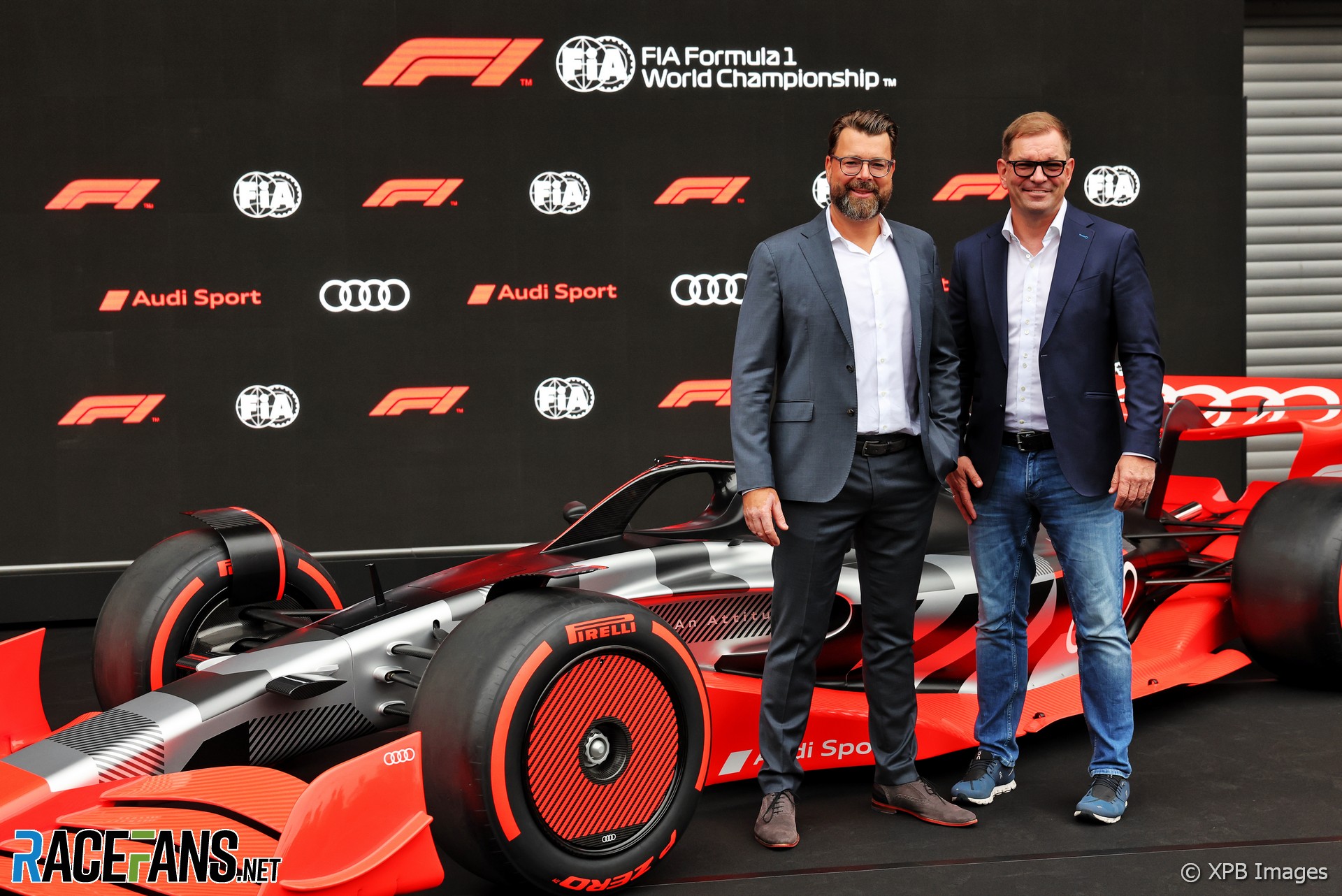 In the round-up: Audi’s CEO Markus Duesmann says Formula 1’s newest engine manufacturer hopes to have a German driver and a race in Germany when it joins the grid in 2026

Audi’s CEO Markus Duesmann says Formula 1’s newest engine manufacturer hopes to have a German driver and a race in Germany when it joins the grid in 2026.

The famous car brand yesterday officially confirmed plans to join F1 as a power unit manufacturer when the sport’s new engine formula comes into effect in 2026. There is currently no German Grand Prix on the calendar with Sebastian Vettel retiring at the end of the season and Mick Schumacher not confirmed for a drive in 2023 at present.

McLaren did all it could to improve Ricciardo’s form – Brown

McLaren Racing CEO Zak Brown says he believes McLaren could not have done anything more to try and help make Daniel Ricciardo more competitive in his time with the team.

Ricciardo’s three year contract with McLaren was terminated just two years in due to his consistently underwhelming results relative to team mate Lando Norris. Speaking on the High Performance Podcast, Brown said felt McLaren did all they reasonably could to extract more performance from Ricciardo.

Liam Lawson says he was frustrated to miss out on a run on the soft tyres at the end of his first practice outing for AlphaTauri in Spa.

The New Zealand F2 driver made his first appearance in an official grand prix session, stepping in for Pierre Gasly. He completed 14 laps and was slowest of all drivers to set a time after the end of the session was interrupted by a red flag for Kevin Magnussen stopping on track, with rain falling as running resumed.

“As a driver it’s my first time, so I was extremely appreciative and I loved every second of it,” Lawson said.

“But, for sure, I was a little bit frustrated not to get back out again on softs. I think I spent the first half of the session getting used to the car and, to be honest, by mid session, I felt quite comfortable. So I was definitely ready to have a good crack on softs.”

sitting atop of eau rouge is insane pic.twitter.com/hJVsJXejfy

Exciting news! I’ve been working on a four-part series called “Brawn: The One Pound Formula 1 Team, covering the incredible F1 Championship Season of 2009. You don’t want to miss this one, coming soon to DisneyPlusUK pic.twitter.com/7q1eWSJZkr

Amazing effort by @SpaGrandPrix @circuitspa , drying out every seat with cloths after rainy few hours😱 pic.twitter.com/vhsTRnQcee

Congratulations to @audisport for joining @F1 !

Audi has given me so much on those 10 years together since I left F1 so it is great to see the group investing heavy in Motorsports again since leaving Le Mans and Formula E.

The No. 29 of @DevlinDeFran is a sweet treat featuring a new @jonessodaco Berry Lemonade livery for the final two rounds of the 2022 @IndyCar season! 🥤💙#AllAndretti pic.twitter.com/Z2l91wfA9g

"We have had quite a lot of sports that have ignored alarm bells ringing and have paid very dearly. We did not want to be in such a position. Our concern was high and we discussed it with medical experts."

F1 Commentator Martin Brundle on Inventing the Grid Walk, Driving Legendary Cars, and Why the Sport Should Always Be a Little Scary (GQ)

"I think this is the best position I've ever seen Formula 1 in by some margin, actually. I would say it is really healthy. We've got 10 really strong teams on the grid. Now, I'd like to see 11 or 12. There’s no doubt about it: Drive to Survive has energised the age group. It's like a marketer's dream."

"Its stunning forest backdrop, long straights and fast corners make it a favourite amongst drivers and fans alike, but how much do you know about our history at the circuit, past and present? Put your knowledge to the test with our Belgian Grand Prix pop quiz."

"I always thought Formula E was a cool concept from the start and now having competed in over half of the races to have ever taken place, I’m even more convinced that’s the case. It has continued to evolve at a great pace and I think we’ve arrived now at a really crucial point for the Championship. It’s taken another large step technically with the coming introduction of Gen3 and it needs to deliver as a spectacle at the same time."

"Even within motorsport, little is known of the driver with dashing good looks who raced in a distinctive yellow car. Beuttler’s impact in a sport seemingly unwilling to shift gears is profound for those seeking queer representation at its pinnacle."

"One hundred races, eight seasons and eight years of electric racing have produced countless unforgettable memories. We’ve raided the Formula E archives to bring you 100 classic clips from down the years, including iconic overtakes, tracks and race wins. "

With Audi announcing it will finally join the Formula 1 grid in 2026 and Alfa Romeo confirming it was cease its F1 partnership with Sauber at the end of 2023, @eurobrun is waiting for the final shoe to drop…