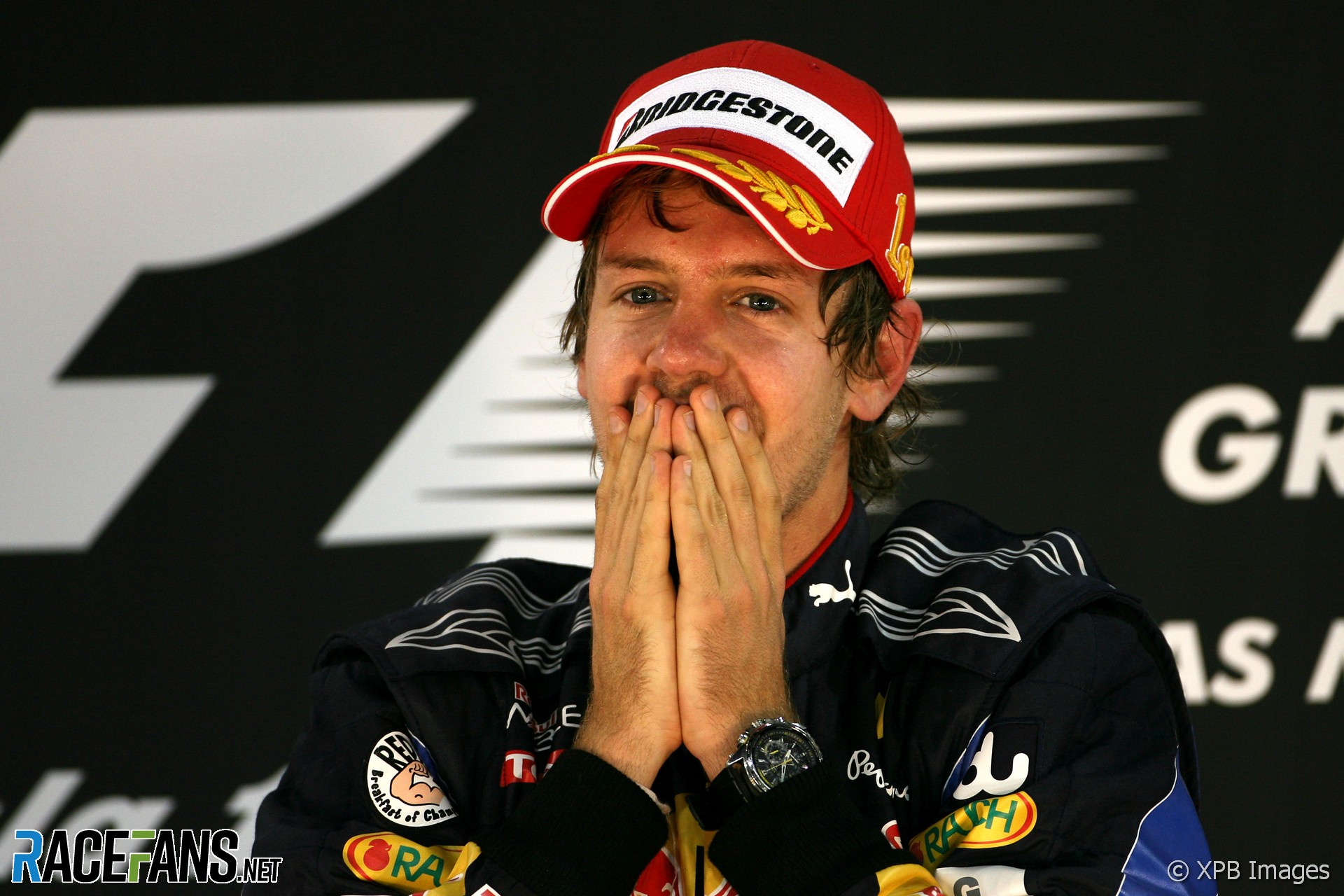 Sebastian Vettel has announced he will retire from Formula 1 at the end of the season, bringing one of the most successful grand prix careers to a close.

During that time he’s driven for five different teams and won races for three of them – so far. His 53 grand prix victories is the third-highest total of any driver and he remains the youngest person ever to win the world championship.

It all began 15 years ago with a one-off debut in the United States Grand Prix.

BMW gave Vettel his first opportunity to get behind the wheel of a Formula 1 car after he dominated their German junior championship in 2003, winning an incredible 18 races out of 20. In 2006 BMW took over the Sauber team and Vettel started making appearances at official F1 race weekends as a practice driver. Notoriously, he collected a fine for speeding in the pit lane as he left the garage at Istanbul Park as he headed out onto the track during a grand prix weekend for the first time.

The following year Vettel made his race debut as a one-off substitute for regular driver Robert Kubica, who suffered an enormous crash during the Canadian Grand Prix. Vettel quickly got to grips with the unfamiliar Indianapolis Motor Speedway road circuit and brought his car home in eighth place for the final point.

Kubica was back in the car at the next race. But Vettel was not left on the sidelines for long.

Red Bull also had a hand in Vettel’s progress through the junior ranks and four races after his debut with BMW Sauber they placed him at junior team Toro Rosso (now AlphaTauri) in place of Scott Speed. His first drive for the team came at the Hungaroring, where 15 years later he has announced his retirement.

Vettel took little time to get on the pace of team mate Vitantonio Liuzzi. But he did not endear himself to future Red Bull team mate Mark Webber by punting him off during a Safety Car period in the rain-lashed Japanese Grand Prix while the pair were running second and third. He made amends at the next race in China with a fine fourth place.

Better followed in 2008 when the Italian Grand Prix weekend took place under what seemed like a persistent downpour. Vettel astonished by planting his car on pole position and striding to victory as the rain continued to fall on Sunday. Not only was it the first and still only victory for a Ferrari engine customer, it meant Red Bull’s junior team had become grand prix winners before the senior outfit.

Unsurprisingly, Vettel was ushered into the top team alongside Webber for 2009, in place of the retiring David Coulthard.

Three races into his career as a Red Bull driver, Vettel scored his second victory in another soaking wet race, in Shanghai. The rapid Brawns won most of the races in the first half of the season, however, and Jenson Button beat him to the title.

The following year Vettel claimed his first world championship title in one of the sport’s most dramatic title-deciders. Alonso and Webber arrived at the top of the standings, yet somehow both contrived to finish outside of the top six, and victory for Vettel sealed a shock title win.

It took four years for anyone to prise the trophy from Vettel’s grasp. The formidable RB7, which he took a record 15 pole positions in, made his first championship defence somewhat straightforward.

But Fernando Alonso made him work hard for his third title, and when he was left facing backwards on the first lap at Interlagos all seemed lost. Incredibly he recovered to deny Alonso the title by three points. Red Bull returned to dominance in the second half of 2013, Vettel winning a record nine races in a row, sealing his final title on the way.

The introduction of F1’s V6 hybrid turbo regulations in 2014 broke Red Bull’s stranglehold on the championship silverware and began an era of dominance by Mercedes. Vettel failed to win once in the under-powered and unreliable RB10, while new team mate Daniel Ricciardo claimed a trio of wins.

Having achieved so much in his time at Red Bull, Vettel was keen for a new challenge. What greater challenge could there be than emulating his great mentor Michael Schumacher’s feat of turning around an underperforming Ferrari team and bring them back into championship contention once again?

Vettel’s tenure at the Scuderia started with great promise winning his second race in red at the Malaysian Grand Prix. However, Mercedes were just too strong over the season for Vettel to be in contention for the title.

After a frustrating, winless season in 2016, the rules changes for the 2017 saw Ferrari and Vettel fly out of the blocks with three wins and three second places in the first six rounds to lead the drivers’ championship up to the summer break ahead of Lewis Hamilton. Unfortunately, three wins in a row for his rival and a crash at the start of a wet Singapore Grand Prix cost him first in the standings, which he never reclaimed.

The following year was also promising, with back-to-back wins to start the season. Once again, Vettel was ahead of Hamilton in the standings, until throwing away a win and the championship lead at his home race at Hockenheim when it began to rain, causing him to crash out of the race. It was the closest Vettel ever came again to leading the F1 drivers’ standings, with Hamilton taking the title and dominating the 2019 campaign.

By now, Vettel’s good friend and team mate Kimi Raikkonen had left Ferrari, replaced by the promising young Charles Leclerc. The newcomer made a strong impression against his champion team mate, winning in Spa and Monza, while Vettel claimed what is likely to be his final win of his career in Singapore.

In the Covid-compromised 2020 season, Ferrari were nowhere. Hit with a power unit nerf after a controversial deal with the FIA, it was the team’s worst season for 40 years. Mistakes were setting in and Leclerc was outpacing Vettel regularly. Before the start of the suspended season, Ferrari announced they would not renew Vettel’s contract for 2021. He was now out of a drive and left pondering his future.

After months of speculation, Racing Point announced that Vettel would join the team when they transitioned into Aston Martin for the 2021 season. With major investment into the Silverstone-based team, it was a new opportunity for Vettel to sink his teeth into a long-term project and try to bring one of the most recognisable brands in automotive history to the front of Formula 1.

The first year was predictably challenging, with the AMR21 confined to the midfield for the vast majority of the season. There were some standout Sundays, however. Vettel kept cool in the chaos of Azerbaijan to secure second place and the team’s first podium appearance in British Racing Green. There should have been a second trophy in Hungary when Vettel chased Esteban Ocon for the win for the whole race, but a shortage of fuel in his car after the race left the stewards with no option but to disqualify him.

By now, Vettel was beginning to show a new side to him. He began speaking publicly about his concern for the environment and setting up bee hotels at home. He was one of the most prominent drivers to embrace F1’s ‘We Race as One’ programme, visibly taking a knee before races alongside rival and friend Hamilton and proudly wearing symbols of LGBTQ+ support in the paddock and on his helmet. He also developed a close relationship with rookie Mick Schumacher – the son of the man who had mentored Vettel a decade prior.

The major rules changes for 2022 were disappointing on track for Vettel and Aston Martin, with the team losing ground compared to many of their rivals. It wasn’t helped by him missing the opening two races due to Covid.

Meanwhile Vettel was continuing to become increasingly vocal off track, even appearing on British political discussion show Question Time on the BBC to share his views about politics, the environment, and human rights. With his contract up at the end of the season, speculation about whether he would continue in Formula 1 beyond this year grew, but Vettel always maintained he had a desire to remain racing.

Eventually, the day before first practice for the Hungarian Grand Prix – one race before the summer break – Vettel announced he would retire from Formula 1 at the end of the 2022 season. If he does not win another race before his retirement, he will end his career with four world championship titles, 53 grand prix victories, 57 pole positions and 122 podium appearances – making him one of Formula 1’s all-time most successful drivers.

And not forgetting the first time he drove a Williams

While Vettel recently got behind the wheel of a 1992 Williams, it wasn’t the first time he’d driven one of the team’s cars. Before his F1 career began, BMW arranged a test for him at Jerez in 2005, driving one of the team’s BMW V10-powered machines.