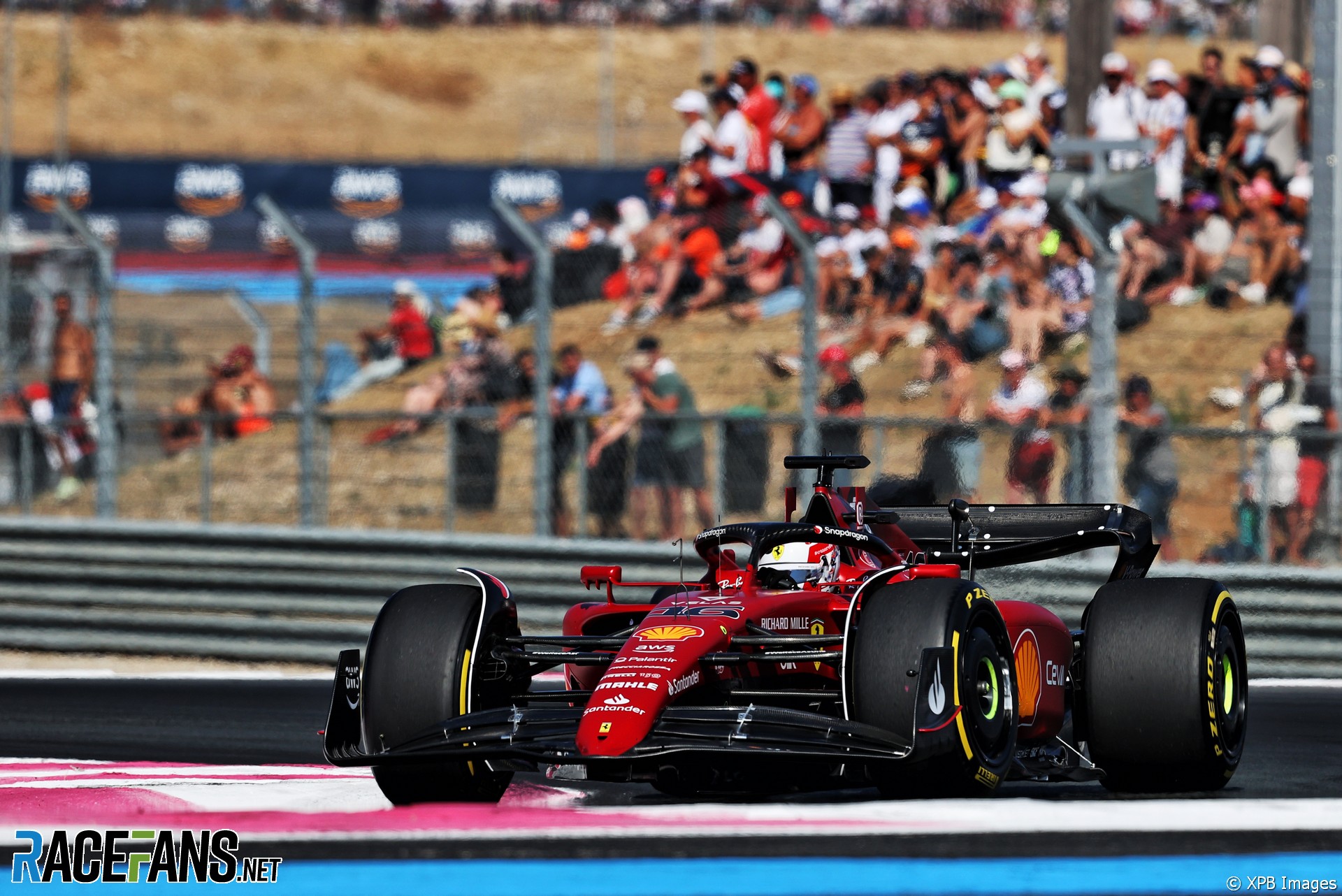 Before Ferrari had arrived in France for this weekend’s race at Paul Ricard, the team had a clear plan for how they were going to beat Red Bull and Max Verstappen in qualifying on Saturday.

With Carlos Sainz Jnr taking a fourth power unit, condemning him to the back of the grid for Sunday whatever happened, the strategy was simple: Get Sainz into Q3, then have him give Charles Leclerc a slipstream on both his flying laps to boost him ahead of Red Bull. After executing the tactic with all the precision of a Patrouille de France aerobatic manoeuvre, Ferrari’s reward was pole position for Leclerc. Just as planned.

But if Leclerc is going to prevail on Sunday, Ferrari may need be even more sharp with their strategy. Especially this final French Grand Prix at Paul Ricard could be the most challenging for teams since the venue returned to the calendar back in 2018.

Having been fastest on Friday and then again at the end of Saturday, one might assume Leclerc would be feeling confident heading into the race knowing how much stronger than Verstappen he had been in the last grand prix. However, with two Red Bulls directly behind him on the grid and no team mate nearby, Leclerc knows he’s got his work cut out.

“I think it will be tricky, because the Red Bull guys seem to be very, very quick in the race simulations they’ve done yesterday,” said Leclerc “We were good in Austria, we struggled a bit more yesterday, but I think we did a significant step up in performance since yesterday so hopefully we can show that tomorrow in the race.”

By Sainz’s own admission, this may be his best start to a weekend all season. Usually, that would make the prospect of a comeback, much as Leclerc achieved in Canada, all the more likely. But Sainz is not convinced he’ll have a simple rise through the field.

“[There’s] a lot of tailwind on the two main back straights – which is where the overtaking happens – which means the DRS effect and the tow is minimal, because the wind is pushing you,” he explained. “So it’s difficult to make it through. Also overheating with the tyres when following another car is not easy, but I will try my best.”

Red Bull may have strength in numbers at the front of the field, but Verstappen accepts that Ferrari appear to have some inherent advantages around Paul Ricard.

“I think overall we need to look a bit into our high-speed performance,” Verstappen said. “I think overall, whatever wing we put on the car, we’ve always been struggling a little bit in high-speed compared to Ferrari.

“For the Ferraris to be on pole again shows that they have a great car and I expect them to be very quick again. It’s good to have Checo alongside though and we are quick on the straights so let’s see what we can do.”

Behind Verstappen and team mate Sergio Perez sit the Mercedes of Lewis Hamilton and George Russell, split by Lando Norris’s McLaren. Norris was, naturally, delighted to have found himself alongside the third best car on the grid, but felt the result said more about Mercedes than it did McLaren.

“I don’t think it’s ‘overperforming’, but we just performed extremely well today and they probably underperformed and I think maybe tomorrow they will just be a little bit ahead as usual,” Norris said. “But I would love to say we can fight them and I’ll do my best to do it.”

Mercedes team principal Toto Wolff agreed with Norris’s assessment: “Overall, our package is just not quick enough and you can see that,” he said.

“We have been experimenting with rear wing levels and tyre temperatures. Once we got the new tyres on in Q3, we knew we were going to be the third-quickest, as we have been all season and it’s just not good enough for us.”

As for the kind of race that could play out on Sunday, it all comes down to the two ‘Ts’: Temperature and tyres.

With the asphalt exposed under the raw heat of the summer sun, track temperatures could well be the hottest drivers will have to contend with all season. Unsurprisingly, that puts tyre management at the forefront of concerns on the pit wall – as well as in the cockpit.

Pirelli’s data tells them that the theoretically fastest route to the chequered flag is through a one stop, likely from mediums to hards. But, as Alonso points out, a revision to the pit lane exit for this year has stretched pit time loss even longer than before, which could have a real impact of Sunday’s strategies.

“The pit lane is the longest of the championship, I think 27 seconds or 28 seconds pit loss,” Alonso explained. “So one stop will be ideal if you can avoid the second 27-second loss. But I don’t know if it’s going to be possible or not.”

Assuming Leclerc keeps the lead off the line – no guarantee with the reasonable length of the run to turn one, notwithstanding Ferrari’s improved clutch – then Leclerc’s first priority will be to avoid the graining troubles that hit Ferrari in earlier races and allowed Verstappen to hunt down and pass him for the lead of the race on track. But as Pirelli’s Mario Isola points out, Leclerc does have a strategic advantage.

“Of the front-runners, Leclerc is the only one to have one set of hards and two sets of medium tyres left for the race,” said Isola. “His direct rivals mostly have two sets of hards and just one set of mediums.” Ferrari appear to have set themselves up to exploit the tyre performance superiority they have enjoyed over Red Bull in previous races.

The sheer performance advantage Ferrari and Red Bull enjoy over the rest of the field indicated the front-runners won’t have to worry about the midfield runners compromising their strategies. Even if Russell passes Norris early in the race, practice pace suggests the top three will just pull away and leave the Mercedes in the dust. A natural window of clear air could organically form by the time the front runners consider stopping, giving them the perfect chance to stop and return to the circuit unimpeded.

With Sainz out of touch at the back for at least the early phase of the race, Red Bull have the opportunity to split strategies to attack Leclerc if he retains the lead at the start. If both Verstappen and Perez can keep pace with the Ferrari – no guarantee based on the gaps between the two Red Bull drivers in practice – then they can attack Leclerc by adopting opposite strategies to put Ferrari under pressure.

Red Bull’s lower wing angles give them a useful speed boost on the straights, but it remains to be seen whether that will come at a cost of inferior tyre life. Friday’s long runs were too short to yield conclusive data.

After perceived strategic errors in Monaco and Silverstone only bolstered Ferrari’s critics, Sainz was keen to use their qualifying tactics as evidence that the Scuderia are more switched on than they are often given credit for. But whatever Ferrari have planned for Sunday’s race, if they successfully overcome the heat and Red Bull’s strength in numbers to keep Leclerc ahead by the chequered flag, it will show they have a real chance of propelling Leclerc back to the top of the championship standings.

Share your views on the French Grand Prix in the comments.

RaceFans is run thanks in part to the generous support of its readers. By contributing £1 per month or £12 per year (or the same in whichever currency you use) you can help coer the costs of creating, hosting and developing RaceFans today and in the future.

5 comments on “Sainz can’t help Leclerc on race day but have Ferrari given him a tyre advantage?”