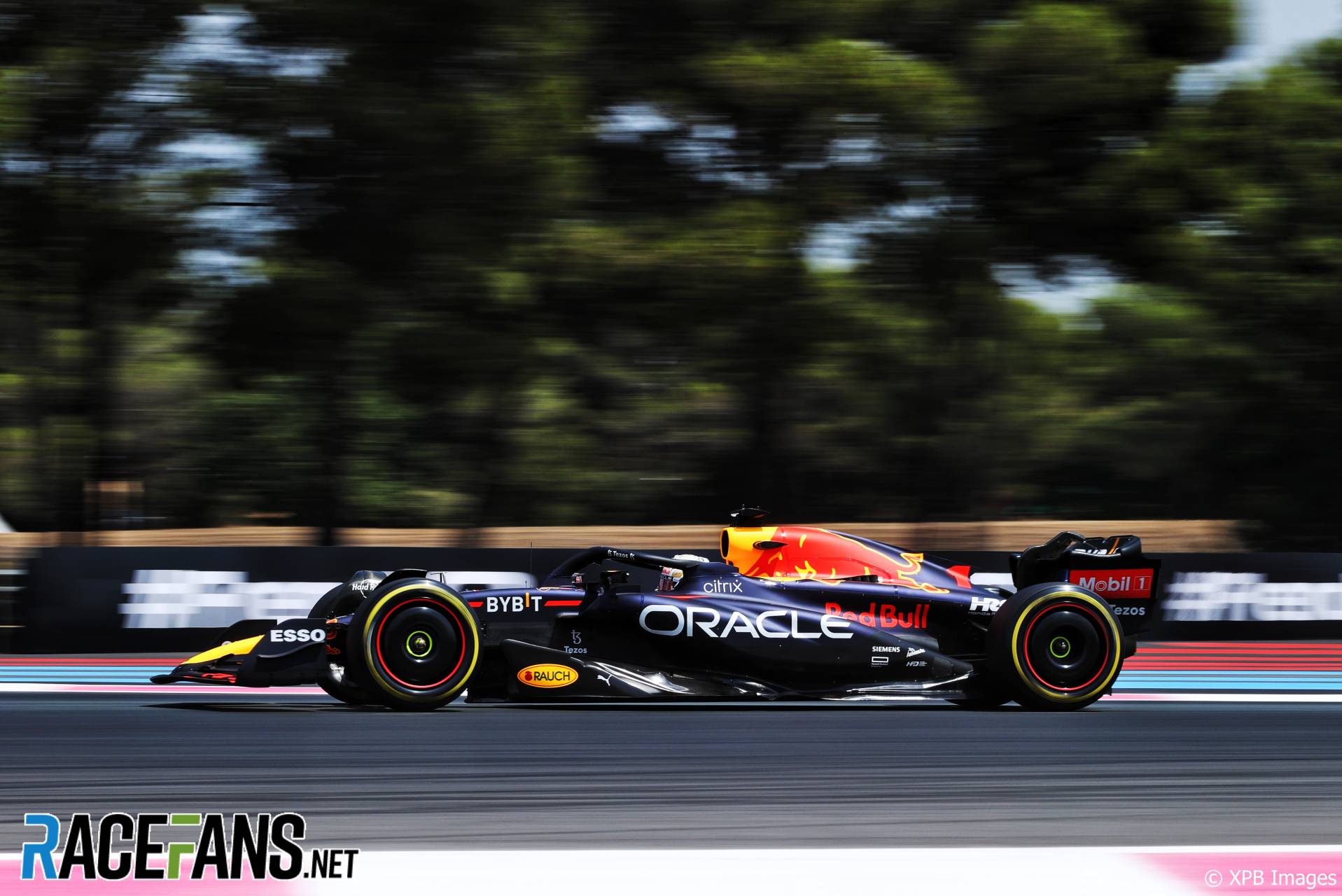 Max Verstappen sent a statement of intent to Ferrari ahead of qualifying for the French Grand Prix by setting the fastest time by three tenths of a second in final practice.

After setting the early pace on medium tyres and spending the majority of the session at the top of the timing screen, Verstappen’s first qualifying simulation run on soft tyres saw him set the fastest time of the weekend so far with just under 10 minutes remaining. That left yesterday’s pace-setters Carlos Sainz Jnr and Charles Leclerc over three tenths off the Red Bull’s pace.

Conditions were postcard-perfect once again for the third and final practice session in Le Castellet. When the hour began, ambient temperatures were a warm 28C while the track was already well up to temperature at 52C.

There was no immediate rush of cars out onto the circuit when the pit lane opened, but Sergio Perez was the first driver to set a meaningful lap time – a 1’33.628 on the medium compound. That was soon beaten by team mate Verstappen, who broke into the 1’32s on the mediums to set the early benchmark.

Ferrari took to the track, with Sainz using softs to move second, four tenths of a second slower than Verstappen. Sainz’s team mate Leclerc had a spin at turn 12 on one of his push lap attempts, ruining his tyres on the abrasive run off. Sainz also lost a lap when he ran wide on the exit of the long Beausset right-hander.

Yuki Tsunoda was very angry with Alexander Albon after taking to the run off at the exit of turn six to avoid the Williams, which appeared to be cruising around on the racing line on the approach to turn seven. The stewards, however, did not feel the need to investigate the incident.

Mercedes eventually sent out Lewis Hamilton to attempt a push lap on soft tyres, but his best was only good enough for third, almost half a second off the ultimate pace. Leclerc improved on his personal best to go into second behind Verstappen, just a tenth slower than Verstappen’s best on medium tyres.

With just over 10 minutes remaining, Sainz jumped to the top of the times with a 1’32.626 with the soft tyres. In response, Red Bull sent Verstappen out on a set of of soft tyres. The Red Bull immediately went fastest in the first two sectors before completing the lap to retake the top spot, three-and-a-half tenths quicker than Sainz’s Ferrari.

Verstappen could not improve on his final lap before the chequered flag came out, but neither could the Ferrari drivers. Verstappen therefore finished the session as the fastest driver for the first time in the weekend, three tenths ahead of Sainz and a further three tenths faster than Leclerc in third.

Hamilton ended the session fourth-fastest, but just under a second off from Verstappen’s best. Perez was almost four hundredths slower than the Mercedes driver, with Hamilton’s team mate George Russell in sixth. Fernando Alonso finished the hour in seventh place, half a tenth ahead of Alexander Albon’s Williams. Lando Norris and Tsunoda completed the top ten.