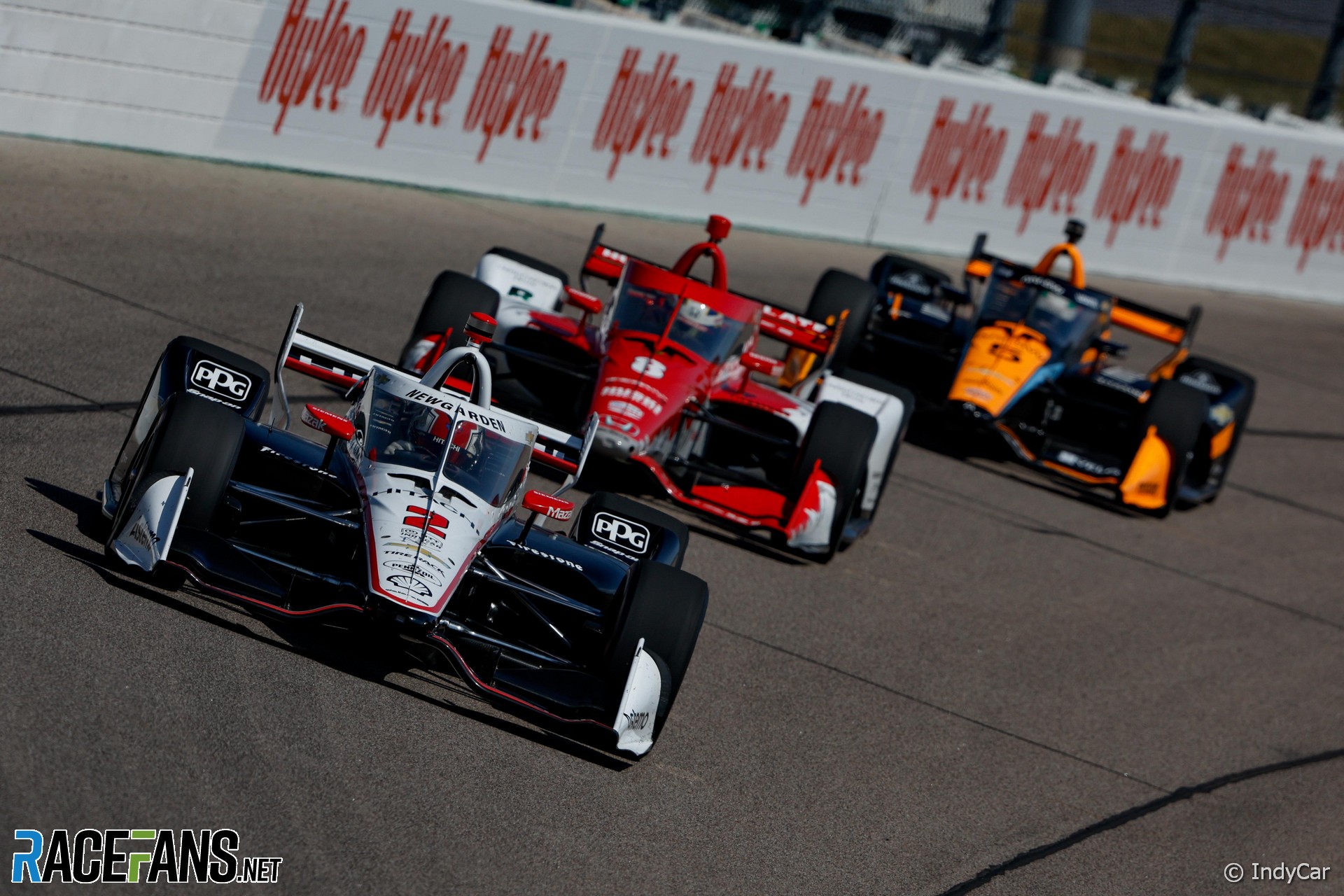 Josef Newgarden took his fourth win of the 2022 IndyCar season at the Iowa 250 today with a consummate drive at the front of the field.

The two-times IndyCar champion made a vital step in his bid for a third crown. His win plus the bonus points for leading the most laps meant he Newgarden closed to within striking distance of Marcus Ericsson at the top of the championship table.

Will Power led from pole position until an early caution period when Jimmie Johnson spun around exiting turn four. On the ensuing restart, Newgarden grabbed the lead from his team mate, and began to pull away.

Quick pit work from his Penske mechanics helped Newgarden maintain his lead following the first round of pit stops. From there on, he was unchallenged. Newgarden led 208 out of 250 laps en route to his record-setting fourth win at Iowa, and back-to-back victories separated by two years.

Pato O’Ward tried to save his tyres on the last stint, and briefly closed to within a second of Newgarden, but dropped back and finished six seconds adrift. However second place meant he also gained ground in the championship fight, and he also face for McLaren SP, after team mate Felix Rosenqvist crashed out of the top 10 on lap 110.

Power finished in third, ahead of Rinus VeeKay and Scott Dixon in the first of the Ganassi cars. He had struggled in qualifying in the morning, but with strong race pace, the six-time IndyCar champion went from 13th to finish fifth, while his embattled team mate Alex Palou rose from 14th on the grid to follow him hpme.

Romain Grosjean finished seventh in his first trip to Iowa, despite having to pit on the final lap. Ericsson, who picked off several drivers in a battling opening stint, slipped to eighth place at the finish after picking up oversteer on his second set of tyres. Rahal Letterman Lanigan Racing drivers Graham Rahal and Christian Lundgaard rounded out the top 10, with Lundgaard as the highest-finishing rookie.

Jimmie Johnson led 19 laps – the second time the NASCAR star has headed the IndyCar field in a race – after taking fresh tyres following his spin. But he dropped to 11th in the closing laps.

Two of this year’s race-winners ended the day with tales of woe. Scott McLaughlin was running inside the top five until his right-rear tyre began to come loose just after a restart, and he was forced to pit for emergency service. He finished six laps down, in 22nd.

Colton Herta was heading for a top-10 finish until he suffered a gearbox problem in the pits. That required several laps of attention, Herta discussing the fault with his father Bryan on the radio. The Andretti driver rejoined the fray and finished 24th, eight laps down.

With less than 24 hours to go until tomorrow’s 300-lap race at Iowa, Ericsson again leads Newgarden, by just 15 points. Power is in third place, just 22 points off the lead. Palou is 33 points behind, and Dixon is 38 points back, in fourth and fifth respectively. O’Ward is in sixth, 59 points back.