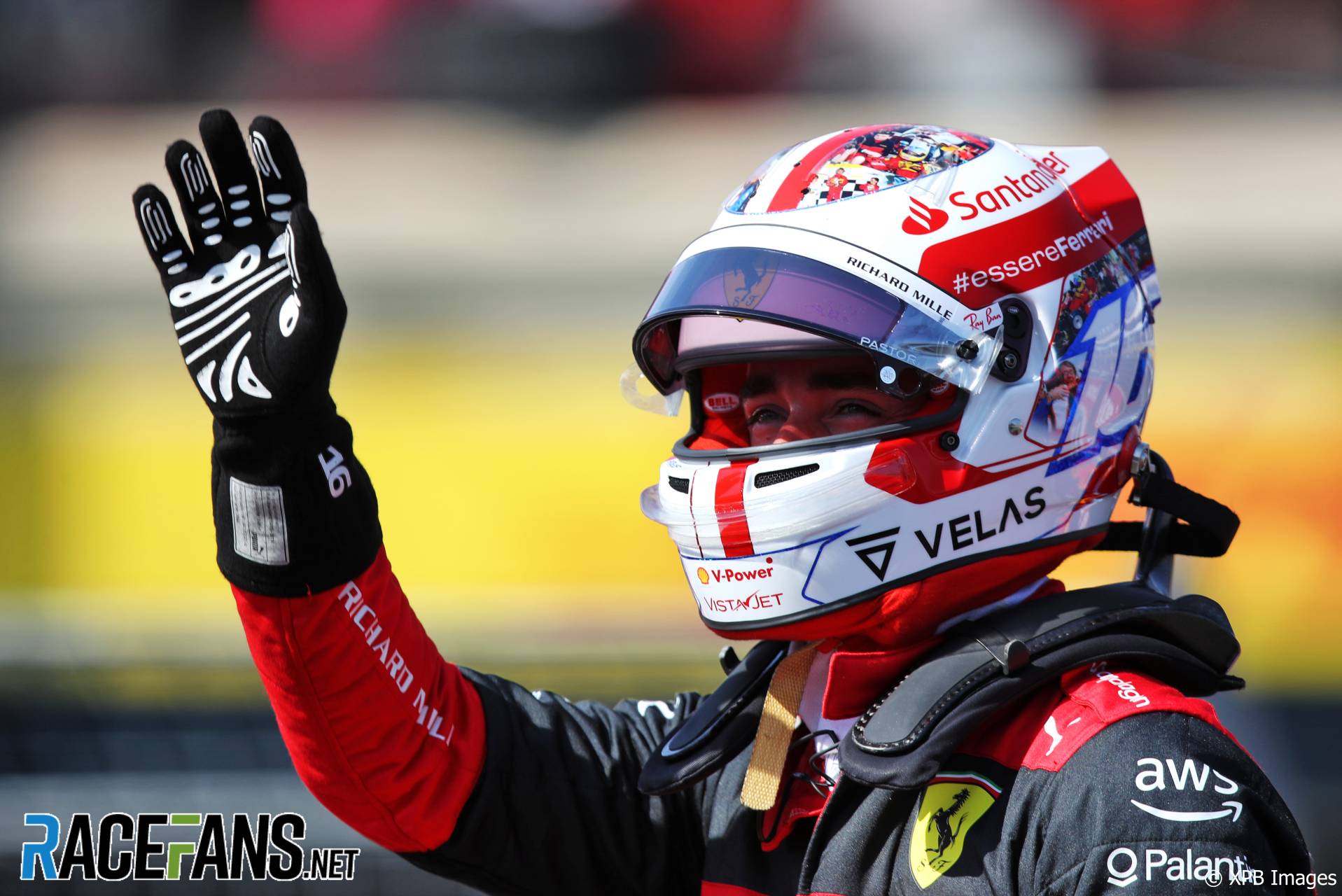 Charles Leclerc took pole position for the French Grand Prix at Paul Ricard after team mate Carlos Sainz Jnr set him up with a slipstream in the final sector.

Leclerc benefitted from Sainz waiting for him on the exit of the Mistral chicane and towing him through Signes to set pole postion with a 1’30.872, three tenths of a second ahead of Max Verstappen and Sergio Perez.

Sainz will start tomorrow’s race from the back of the grid, alongside Kevin Magnussen’s Haas, which also reached the final phase of qualifying.

Track conditions were virtually identical to the three practice sessions leading up to qualifying as the first phase got underway at Paul Ricard.

Charles Leclerc was one of the first drivers to set a time in the session and unsurprisingly it was the fastest – indeed, his 1’31.727 was the quickest time of the weekend so far. Sergio Perez’s first effort was a full six tenths slower than the Ferrari’s, but Max Verstappen got closer in the other Red Bull. He moved into second place on his first timed lap, just over a tenth of a second slower than Leclerc but comfortably quicker than his team mate.

Leclerc attempted a second push lap on his soft tyres but could not improve on his initial time, and told his team he didn’t understand why they had attempted it. Team mate Carlos Sainz Jnr moved third with his first effort, just over half a second behind his team mate at the top of the times.

With five minutes remaining, the track fell virtually silent. The four drivers at risk of elimination were Zhou Guanyu, Mick Schumacher, Nicholas Latifi and Sebastian Vettel, with Kevin Magnussen choosing only to make a single run at the end of the session in the knowledge he would start from the back of the grid whatever happened.

As time ticked down to just under four minutes remaining, the drivers all took to the track for their final efforts. Already in trouble, a mistake by Zhou exiting turn six ruined his lap and guaranteed his elimination.

Alexander Albon also had a spin at the chicane, putting him in danger of being eliminated. The yellow flags caught out Pierre Gasly, who was forced to back off and could not improve on his personal best time. That left the AlphaTauri vulnerable and when Mick Schumacher improved, it appeared to seal Gasly’s elimination.

However, Schumacher’s time was deleted when the stewards noticed he had cut the inside of turn three, dropping the Haas back down to 19th. Vettel improved into 12th to go safe, pushing Gasly into 16th. The AlphaTauri driver was therefore eliminated while Albon, whose spin had compromised his final run, went through.

Gasly joined Stroll, Zhou, Latifi and Schumacher in elimination. It was a particular blow for Haas, as their only driver to reach Q2 was the one doomed to start at the back due to his power unit penalty.

Mercedes were the first out on track as the second qualifying segment began, sending both Lewis Hamilton and George Russell out on used tyres. Hamilton was the first to cross the line and set the initial benchmark time of a 1’33.329, with team mate Russell three tenths slower at the end of his first lap.

Lando Norris moved into first place on new soft tyres, before he was deposed by Leclerc’s Ferrari on old softs. Then the Red Bulls set their first flying laps on new soft tyres, with Verstappen setting the fastest time just over a tenth ahead of team mate Perez.

Again, the track cleared until just under five minutes remaining. Sitting in the drop zone in 12th, Russell asked Mercedes to send him out early to avoid the risk of his next lap being compromised by yellow flags. The team weren’t able to get him out until the final few cars joined the track, but no yellow flags appeared in the deciding minutes.

Vettel, Esteban Ocon, Albon and Tsunoda were the other drivers who had to improve their times to earn a right to run in Q3. Albon and Ocon were the first drivers over the line to start their laps, with Albon improving from 14th to tenth, still on the bubble. Ocon jumped to sixth, which knocked the Williams back outside the top 10 and into elimination.

Vettel’s final effort was only good enough to move him ahead of Albon, but not into the top 10. Bottas and Tsunoda both appeared to have moved into safety, but Russell and Alonso all improved their times to put both Bottas, Tsunoda and Ricciardo back at risk.

Magnussen in tenth improved on his final lap, moving Ricciardo onto the bubble. Hamilton was the final driver in danger able to set another time and the Mercedes comfortably jumped to fifth, knocking out Ricciardo.

That left Ricciardo, Ocon, Bottas, Vettel and Albon all out, although all five will gain at least two positions on the starting grid after Sainz and Magnussen serve their penalties.

The final stage of qualifying saw both Ferraris head out onto the track together, Sainz ahead of his team mate. As he was set to start at the back regardless of his final position due to his penalty, Sainz was pressed into service to ensure Leclerc benefited from a slipstream.

Perez was the first driver to set a time, a 1’31.640. That was immediately beaten by Verstappen, who went four tenths faster to move into provisional pole position. But heading along the Mistral straight, Sainz backed off to allow Leclerc to gain a tow, allowing the Ferrari to take pole by just eight-thousandths of a second after the first run.

Sainz abandoned his run without setting a time. That left Leclerc fastest ahead of Verstappen and Russell fourth, one place ahead of team mate Hamilton in fifth as the field returned to the garage to prepare for their final run.

In the final minutes, Ferrari again sent Sainz out first ahead of Leclerc, while Red Bull opted to scramble Perez first onto the circuit while Verstappen was released behind the two Ferraris for his final run.

Leclerc went fastest of all in the first sector, while Sainz again backed off after the Mistral chicane before getting up to speed as Leclerc approached behind him. In an expertly-judged move, Sainz gave Leclerc a perfect slipstream along the straight through Signes before jumping out of the way before the braking zone for turn 11.

Leclerc completed his lap to set a stunning time of a 1’30.872 to take pole position. Only Verstappen had a realistic opportunity of beating that, but while he improved on his personal best, he was still three tenths of a second off from pole. That secured Leclerc his seventh pole position of the season, with Verstappen alongside on the front row and Perez behind them in third.

Hamilton jumped ahead of Russell at the chequered flag to take fourth place, with Lando Norris also demoting Russell down a place by splitting the two Mercedes in fifth on his final lap. Fernando Alonso will start seventh on the grid, ahead of Yuki Tsunoda in eighth. Both Sainz and Magnussen failed to set a time in Q3, but will occupy the back row of the grid for tomorrow’s race.

RaceFans is run thanks in part to the generous support of its readers. By contributing £1 per month or £12 per year (or the same in whichever currencyyou use) you can help cover the costs of creating, hosting and developing RaceFans today and in the future.