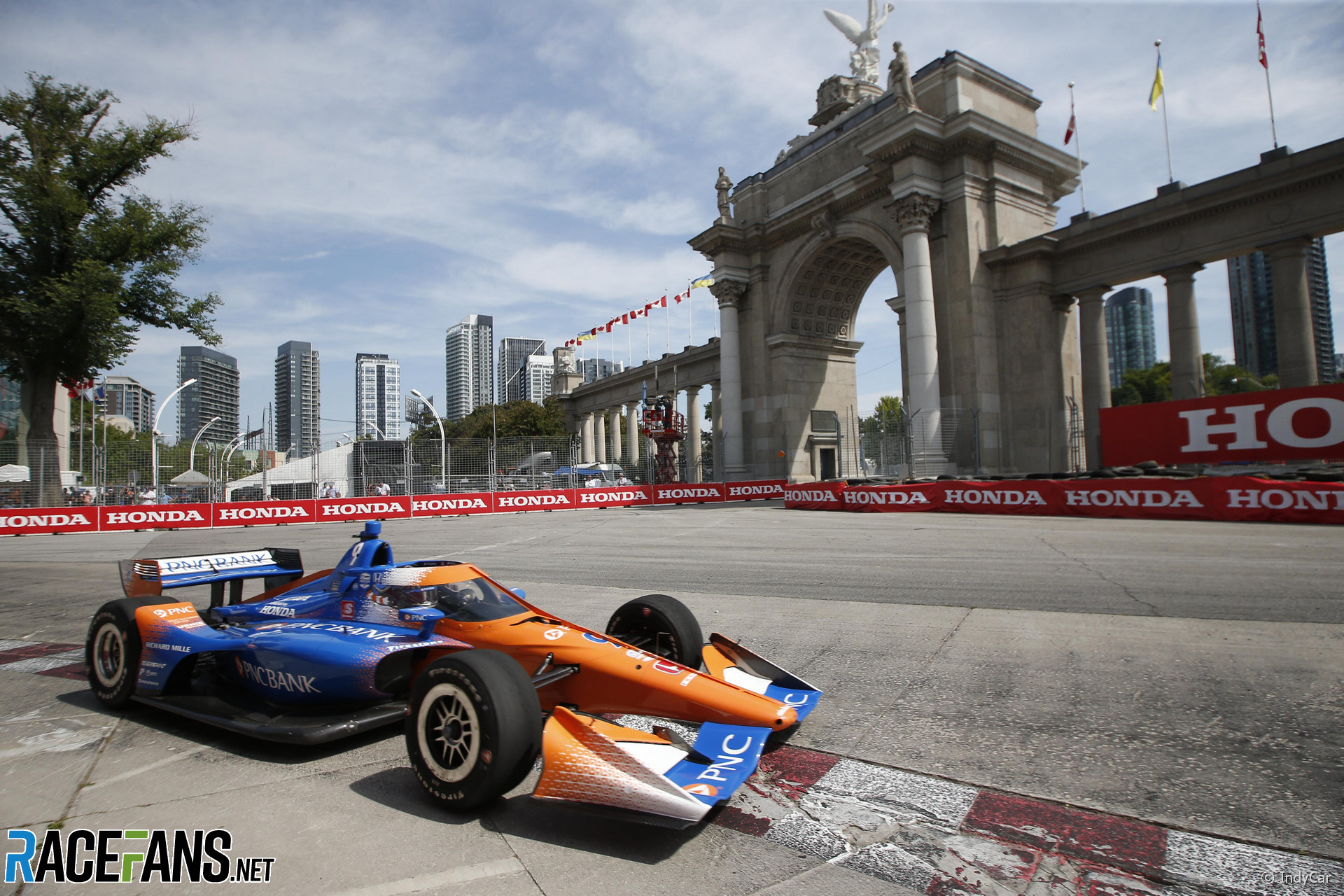 Six-time IndyCar Series champion Scott Dixon has put his name back in the forefront of the 2022 championship discussion, winning today’s Indy Toronto at the Exhibition Place Street Circuit.

Pole winner Colton Herta had to settle for second place behind the Chip Ganassi racer, while Felix Rosenqvist claimed the final podium position in third.

The series’ return to Canada for the first time since the pandemic began was greeted by strong crowds all weekend and a distinct buzz around the streets of Toronto. Colton Herta led the field to the green flag, but after just one lap of racing, Takuma Sato brought out the caution when he clipped the concrete wall exiting turn two.

Herta, who arrived off the back of a two-day test with the McLaren Formula 1 Team in Portimão, led away from the ensuing restart and continued to run up front until the end of his first stint on lap 18. He emerged from the pits ahead of Dixon initially, but Dixon, who pitted one lap earlier for fuel and tyres, was able to get past and took the net lead of the race, which he then never relinquished.

Another critical moment in the race came during a round of pit stops under Safety Car on lap 47. The quick work of the Chip Ganassi Racing crew in the pits helped Dixon retain his net lead over Herta and the rest of pack.

Following two more full-course cautions, Dixon inherited the lead from lap 61 after Rinus VeeKay made his final pit stop of the race. He led the field back to the green flag with 19 laps to go and made a clean getaway from the front, almost immediately building a two-second advantage.

The victory was Dixon’s first win of the 2022 season, less than two months after his latest agonising disappointment at the Indianapolis 500 in pursuit of an elusive second Borg-Warner trophy.

Dixon recorded his 52nd career IndyCar victory, which now ties him with Mario Andretti for second on the all-time career wins list. It also ends a 23-race winless drought dating back to the 2021 race meeting at Texas Motor Speedway. The victory also gives Dixon at least one IndyCar race win in each of the last 18 seasons, extending his own personal record.

And within the scope of this season, today’s win and the 53 points attached to it (including bonuses for leading the most laps, 40 out of a total of 85) has brought Dixon one step closer to a potential seventh IndyCar championship title. At the end of the race, Dixon closed to within 44 points of team mate and championship leader Marcus Ericsson, with seven races left to run – two of them taking place next weekend at Iowa Speedway.

Herta came close to notching his second win of the season but had to be content with a second place finish, which moved him up to eighth in the championship table, closer to the desired fifth place that would guarantee him a potential FIA Super License for 2023.

Felix Rosenqvist, whose exact placement within McLaren Racing for 2023 has yet to be determined, had another strong result to bolster his case to remain in IndyCar by finishing in third place. This was the Swede’s first podium since joining the McLaren SP team at the start of 2021.

Rosenqvist’s race was not completely without controversy, however, as the McLaren SP driver clashed with Alexander Rossi on lap 45, causing the third full-course caution of the day. Rosenqvist was trying to pass Rossi for fourth position, and gentle wheel-to-wheel contact between the two drivers spit Rossi into the concrete barrier at turn four, ending Rossi’s race early.

Graham Rahal recorded his best finish of the season in fourth, and Ericsson continued to maintain his lead at the top of the championship table by finishing fifth.

The one driver in the eye of the storm since controversy erupted over McLaren’s announcement he would join them for the 2023 season, defending IndyCar champion Álex Palou put the distractions to one side and confidently picked his way through the field from 22nd on the grid to finish sixth, keeping him very much alive in the championship hunt.

He finished ahead of Simon Pagenaud in seventh, rookie Christian Lundgaard in eighth, Scott McLaughlin in ninth, and Josef Newgarden in tenth after he dropped down the order following an issue during his second pit stop.

Championship contenders Pato O’Ward and Will Power finished outside the top ten in 11th and 16th, respectively – denying them the opportunity to gain ground on Ericsson. Power is still second in the championship standings, but now sits 35 points behind Ericsson, just two points ahead of Palou, and nine points ahead of Newgarden and Dixon.

Apart from Sato’s accident on lap two and the collision between Rossi and Rosenqvist on lap 45, the other full course cautions were on lap 55 when a piece of concrete broke off the kerb and came to rest on the racing line at turn one, and on lap 60, when Kyle Kirkwood and Jimmie Johnson collided while battling over 21st position.

IndyCar returns to the short oval at Iowa Speedway for a double-header weekend consisting of a 250 mile race on Saturday and a 300 mile race on Sunday.