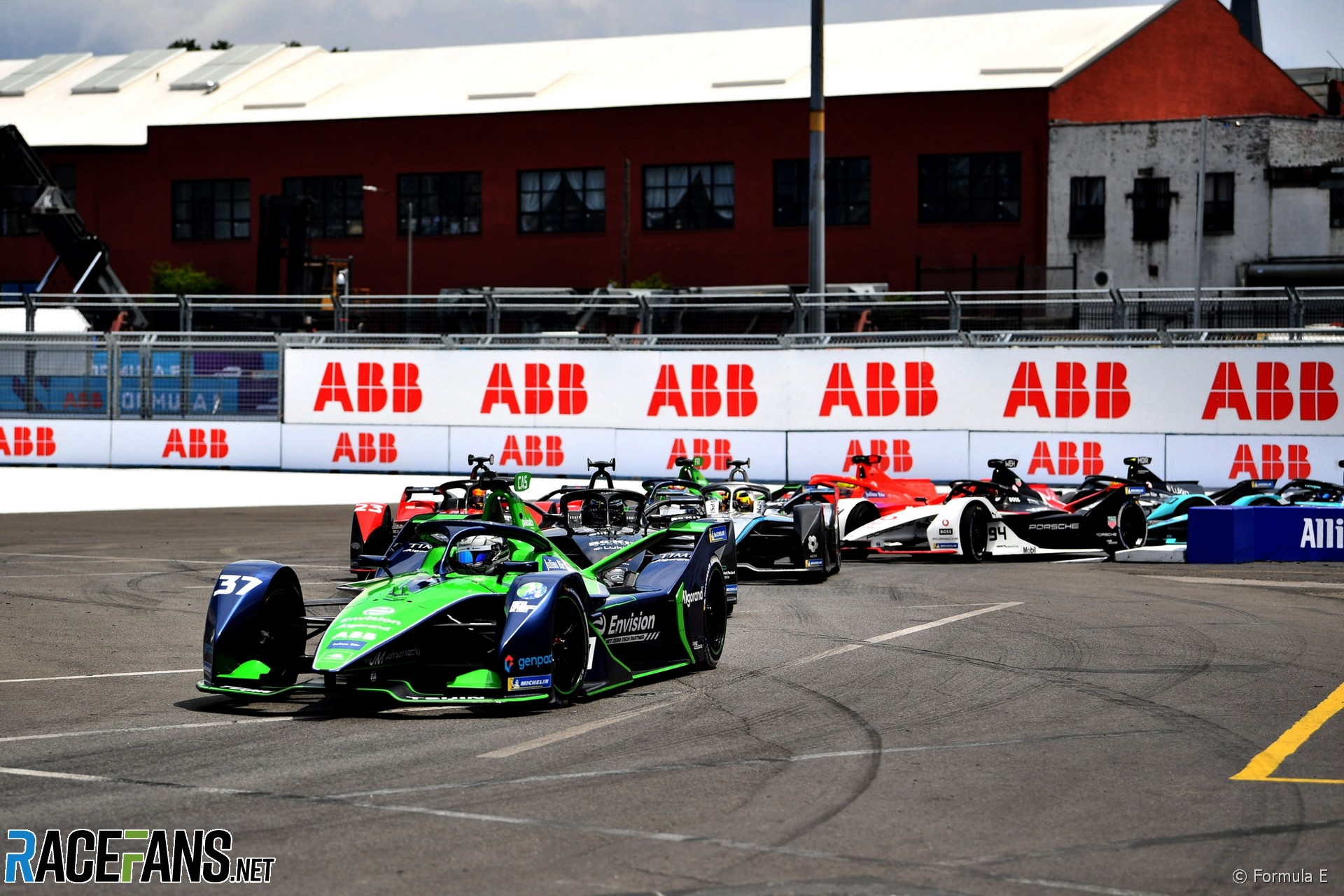 Nick Cassidy won his first Formula E race in New York on countback after the first EPrix of the weekend was red flagged due to a major accident caused by a sudden downpour.

The Envision driver led the majority of the race before rain suddenly fell on the circuit with 15 minutes remaining. A heavy downpour resulted in all the leading cars aquaplaning off the circuit at turn six, causing the race to be stopped.

Cassidy, second placed Lucas di Grassi and fourth placed Stoffel Vandoorne all piled into the barrier, appearing to take them out of the race. However, race control announced that the final seven minutes of the race would not be run, leaving Cassidy as the race winner after countback. Di Grassi was awarded second place, with Robin Frijns completing a double podium for Envision in third place.

At the start, pole winner Nick Cassidy leapt off the line to hold the lead ahead of Lucas di Grassi, with Sebastian Buemi jumping into third place in the Nissan ahead of Stoffel Vandoorne. Behind, Jean-Eric Vergne hit by Mitch Evans who was caught out in the crunch of the pack compressing into turn two, sending the Techeetah into a spin and dropping him to the back of the field. On the second lap, Nyck de Vries run very wide at the dusty first corner, but recovered back to the track without losing position.

Jake Dennis was the first driver to activate his first Attack Mode at the hairpin from tenth, followed on the next lap by Alexander Sims and Edoardo Mortara ahead of him. Then, Robin Frijns activated his first Attack Mode from fifth, retaining his position, while Pascal Wehrlein also followed suit, dropping two places behind Sims and Dennis to sixth.

Next it was the turn of race leader Cassidy to take Attack Mode and he was followed by third-placed Buemi. Di Grassi inherited the lead, dropping Cassidy to second, while Buemi held onto his third place. Cassidy immediately caught up to the back of the Venturi, who took Attack Mode at the hairpin on the next lap and managed to neatly slot back into second place behind Cassidy but ahead of Buemi.

Cassidy was not pressured for the lead when his extra energy allowance expired. With around half of the race time elapsed, Buemi took his second Attack Mode, dropping him to fourth place behind Stoffel Vandoorne. Then Cassidy took his second a lap later, dropping him behind Di Grassi into second place. Di Grassi relinquished the lead back to Cassidy when he took Attack Mode, but rejoined behind Vandoorne. This allowed the Mercedes driver to take his final Attack Mode and rejoin ahead of Buemi in third, having effectively gained a position in the sequence.

When Di Grassi’s Attack Mode expired, Vandoorne had an opportunity to pressure Di Grassi for second place with his final minute of additional power. Di Grassi used his Fan Boost strategically to keep ahead of the Mercedes down the pit straight as Vandoorne’s Attack Mode expired. However, the Mercedes had also been awarded Fan Boost and Vandoorne activated it along the back straight, pulling alongside the Venturi and through into second place.

With around 13 minutes of standard race time remaining, light spots of rain began appearing on the onboard cameras of the cars around the circuit. Suddenly, Vandoorne was under pressure from Di Grassi and the Venturi got a run along the pit straight and passed the Mercedes up the inside of turn one to take second place back. With Vandoorne’s line into the corner compromised, Frijns followed Di Grassi through into the final podium position.

The rain rapidly increased in intensity, causing a build up of standing water on the circuit. A Full Course Yellow was called due to the conditions, but it was too late to prevent a horrifying accident befalling the leaders, who all hit large puddles along the back straight and began to aquaplane off the circuit at turn six. Leader Cassidy speared straight into the barrier, with Di Grassi following behind. The pair were immediately slammed by Vandoorne’s Mercedes, while Mortara spun into the wall along the straight but managed to recover his damaged Venturi back onto the circuit.

Wehrlein also had contact from Buemi behind on the straight but continued, but his right rear wheel was so heavily damaged that he shuddered to a stop right in front of a pack including Sam Bird, Dennis and Mitch Evans. The race was immediately red flagged, with Frijns credited as the leader ahead of Mortara, Evans and De Vries. All cars that were not terminally damaged returned to the pit lane while the various accidents were cleared.

After a delay of over ten minutes, race director Scot Elkins announced that the race would not be resumed and that the results would be taken from the end of the penultimate lap. That left Cassidy as the winner, despite aquaplaning off the circuit. Di Grassi was credited second with Frijns awarded third despite having been one of the only drivers to have avoided contact in the chaos.

Championship contender Vandoorne was credited with fourth place, ahead of championship leader Mortara. Sebastian Buemi claimed sixth ahead of Werhlein, Dennis, Bird and De Vries rounding out the points in tenth.