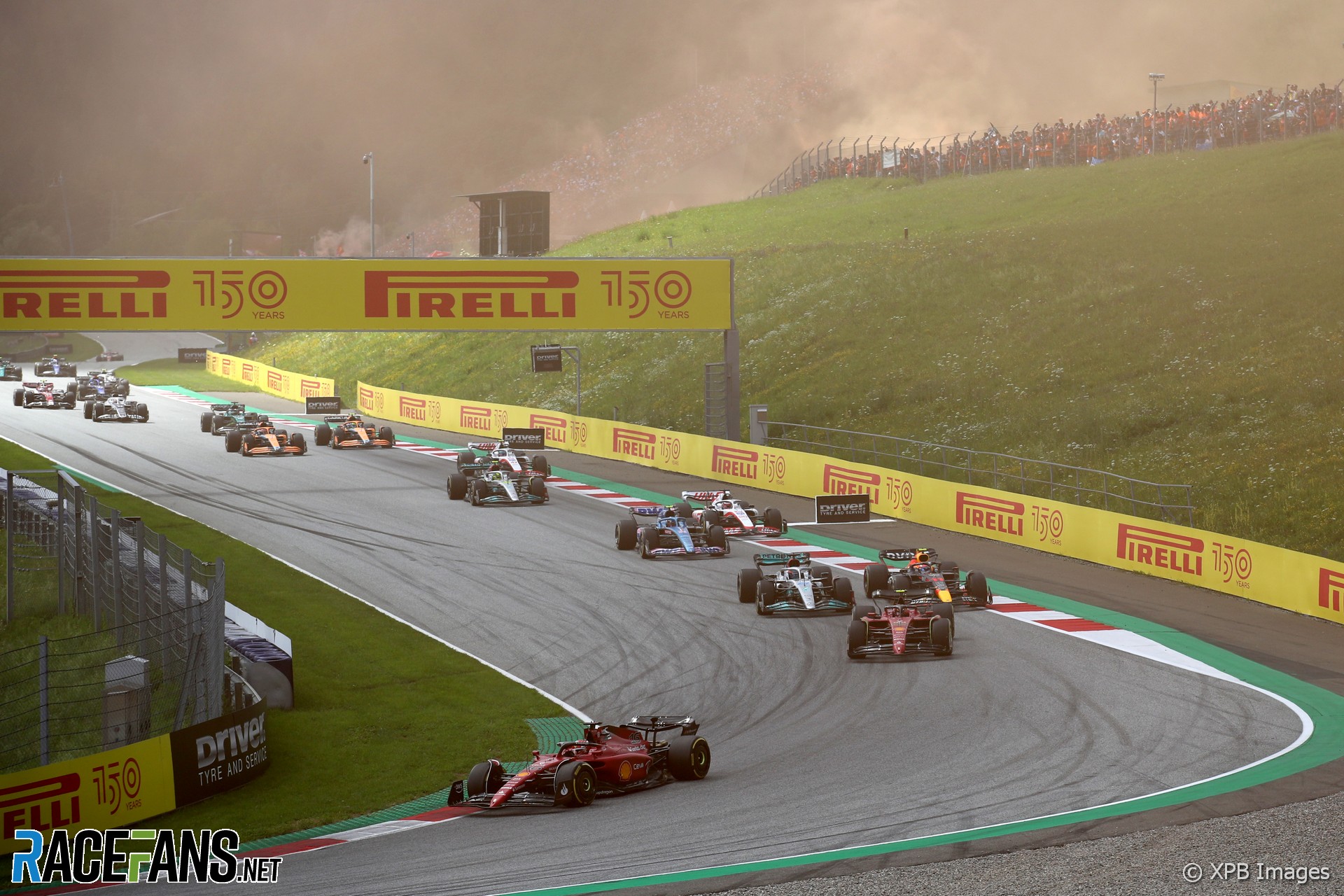 In the round-up: Mercedes criticise the penalty George Russell was given for his first-lap collision with Sergio Perez in the Austrian Grand Prix.

Russell was given a five-second time penalty, and two endorsement points on his superlicence, for his first-lap tangle with Perez. However Mercedes’ head of trackside engineering Andrew Shovlin took issue with the decision.

“We felt that George’s penalty for the incident with Sergio was harsh,” he said. “He was up on the apex kerb and left more than enough room.” After fitting a replacement front wing to his car, Russell took fourth behind team mate Lewis Hamilton,a result Shovlin called “very satisfying.”

Lando Norris stopped on track during first practice at the Red Bull Ring with a power unit problem, prompting McLaren to revert to older hardware.

“The power unit that failed on Lando’s side on Friday was a brand new one and was his third one,” team principal Andreas Seidl confirmed. “Analysis is still ongoing on Mercedes side and the [High-Performance Powertrains] side at the moment and hopefully we’ll stay in a position to recover the power unit and get it in a better place again.

“It wasn’t ideal that he had to go back to the old power unit but that was the team’s solution on Friday,” explained Seidl. “Power units are losing a bit of power with every mileage but at the same time, it allowed us to perform as we did this weekend.”

‘Williams faster than us in Austria’ – Bottas

Valtteri Bottas said that Alfa Romeo have not kept pace with the development rate of their rivals.

“Some teams clearly have made progress like for example Williams,” said Bottas. “This weekend they seem better than they have been and Alpine, McLaren were a little bit faster than us. But that was not the case in Silverstone. So we need to keep progressing.”

Alfa Romeo failed to add to their points tally in Austria. “It’s not good but we tried,” said Bottas. “I pretty quickly realised I was stuck behind the DRS train in the beginning.

“So that’s why we stopped, tried to find some clean air and went to like kind of a hard-hard [tyre strategy]. I think it was the right thing to do, but just didn’t have quite enough pace and Fernando [Alonso] got that one point from me in the last lap with fresh tyres and that was annoying.”

It’s our pleasure to host fans Mollie and Julia, who yesterday were subjected to the abuse reported by many at the #AustrianGP.

This is a small act, which must be part of a larger movement to combat the unacceptable behaviour on display.

All in. All welcome. All celebrated. pic.twitter.com/eapSPAiKy5

Aftermath of the invasion of Dutch 'race-'fans after the F1 race, can't help to feel ashamed of their behaviour. pic.twitter.com/dkrjldJhSo

Even from the podium in Sardinia, Team X44 has all eyes on the #AustrianGP @LewisHamilton #TeamLH 🐐💜 pic.twitter.com/laO5kq4s3s

We are all happy to see Henrique Chaves able to step out of his TF Sport Aston Martin after this dramatic crash at Variante Roggia.#WEC #6HMonza @OfficialTFSport pic.twitter.com/vYqiXRgTvi

As I am still recovering, I have called @robertomerhi after his incredible race , firstly to congratulate him and secondly that I want him to continue driving in my car for the next F2 race. I support 100% talent and not a driver with 100% money… #vamosTeto

F1 – please get rid of stupid white boxes and driver names during onboards. Idiotic bells and whistles that are just a distraction.

Following the incident several things are under review, from the collapse of a roll-hoop structure that passed all the FIA-mandatory tests at first attempt, to the fact the gravel trap didn’t do anything to slow the Alfa Romeo down, to the presence of a small piece of tarmac between the end of the gravel trap and the tyre wall, that effectively launched the C42 over the protection barriers, to the gap between the safety net and the guard rails, where Zhou’s car landed.

Spielberg: 'Surprisingly calm' according to the police (ORF (German))

The police said that no assaults or incidents of this kind were reported to officials, rather it was 'surprisingly quiet' given the more than 300,000 guests.

Hadjar: 'We clearly reduced the gap in the Championship points, and we came back on Victor. That was the goal of the weekend and I think it's my best weekend so far.'

On a day of mixed results for Ferrari, despite Charles Leclerc’s victory, Tifoso1989 considers what could have been without Sainz’s dramatic power unit failure:

The failure on Sainz’s car was really scary. The power unit has literally blown up and thank heaven he was out of the car before the fire got worse. If this happened to Zhou last race, it would have certainly been a disaster… On the other hand, Ferrari confirming that they have the best all-around car, quick everywhere on every tyre and in all conditions.

Verstappen and Red Bull, despite being perfect in both qualifying and race and squeezing everything possible from the RB18 by bringing upgrades every race, even in the Red Bull Ring have no answer to the pace of both Ferraris, not only Leclerc. Sainz was on the way to overtake Max before his power unit failure.

I wonder what would have happened if Sainz was still in the race and Leclerc had his throttle issue. Vettel in Hungaroring 2017 have had a steering wheel issue and Raikkonen escorted him to the finish line, overtaking was difficult but nevertheless Raikkonen didn’t mount an attack on Seb.
@tifoso1989