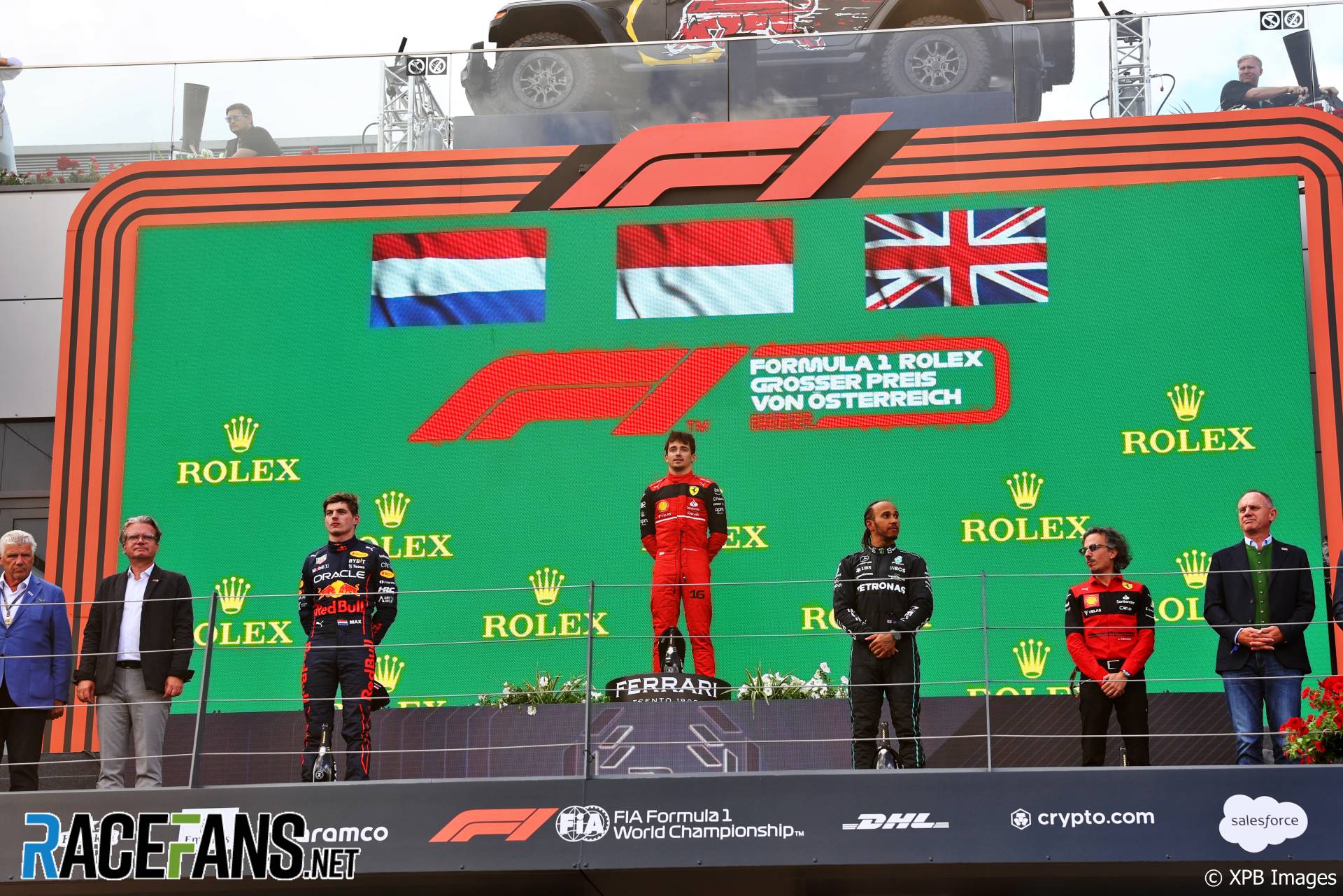 Charles Leclerc, Max Verstappen and Lewis Hamilton, the top three finishers in today’s Austrian Grand Prix, have kept their finishing positions after an investigation by the stewards.

However the trio have been given suspended fines of €10,000 each for violations of parc ferme protocol.

The three podium finishers were summoned to the stewards two hours after the race for potential violations of article 12.2.1 (i) of the International Sporting Code, governing parc ferme procedures.

After investigating all three drivers, the stewards have handed each a fine of €10,000 – suspended until the end of the 2022 season – after concluding that the physiotherapists for each driver had entered parc ferme earlier than permitted.

Prior to every race this season, the FIA’s media delegate has informed teams about the post-race procedures that will be observed after the conclusion of the event. These procedures have included an instruction that “other than the team mechanics… officials and FIA pre-approved television crews and FIA approved photographers, no one else will be allowed in the designated area at this time.”

Since the Canadian Grand Prix last month, the post-race procedures have emphasised that no “team PR personnel” are permitted in parc ferme as drivers arrive after a race. Teams are now instructed that “driver physios must wait outside the cool-down room behind the podium until the podium ceremony has concluded”.

In their decision, the stewards explained they had “received a report from the media delegate, which was subsequently confirmed by video evidence, that the physio / drivers’ assistants of the top three finishers entered parc ferme without permission and in violation of the procedure that was published prior to the race ‘for the orderly conduct of the event.'”

With all drivers being officially weighed in parc ferme at the end of the race, the stewards explained that the new procedure is “in part… to prevent handing over of items to the drivers prior to them being weighed.” As well as giving the drivers their suspended fines, the stewards also warned their physiotherapists’ paddock passes “may be revoked in case of systemic violation.”

The decision does not change the final result of the race, which saw Leclerc lead home Verstappen and Hamilton to claim his third victory of the 2022 season.

43 comments on “Leclerc, Verstappen and Hamilton given suspended €10,000 fines but keep results”