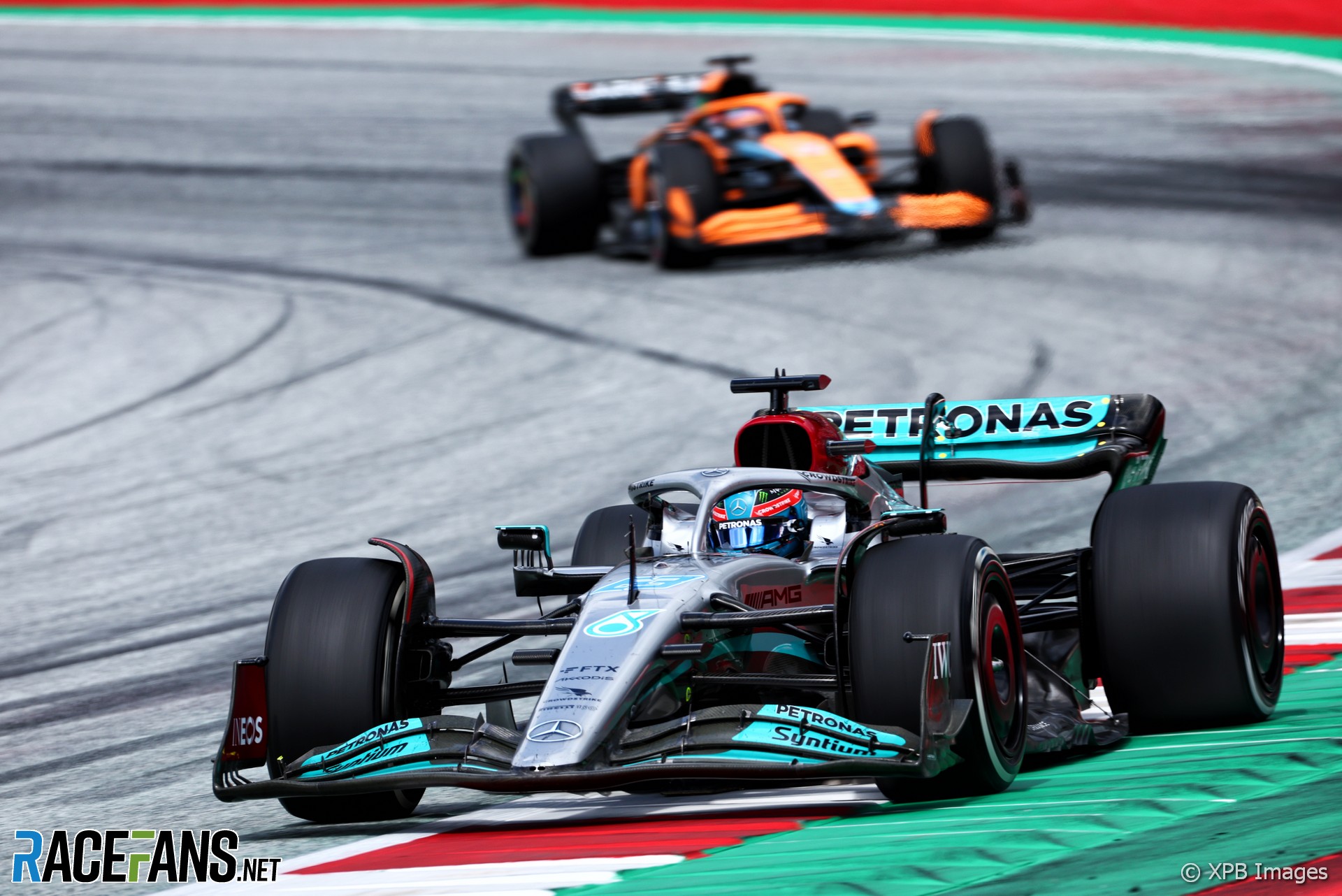 George Russell says that he lost ‘probably a second a lap’ with damage sustained during an opening lap clash with Sergio Perez in the Austrian Grand Prix.

Russell passed Carlos Sainz Jnr at the start for third place, before the Ferrari driver fought back to retake the position. This allowed Perez to challenge the Mercedes, attempting a move around the outside of turn four. Russell clipped the inside kerb and then hit the right rear of the Red Bull, pitching Perez into the gravel.

The stewards handed Russell a five-second time penalty and two penalty points on his superlicence for the collision. Russell remained in fourth place but lost 11 seconds to Sainz ahead by the time he pitted for a front wing change and to serve his penalty at the end of lap 11. The Mercedes driver eventually finished fourth, while Perez later retired from the race due to damage from the contact.

“It was a bit frustrating to have the incident at ten four,” Russell said after the race.

“Obviously I lost a huge amount of lap time with the damage – probably a second a lap. Then to find out I got the penalty, then obviously the front wing change – a 20-second long pit stop – I guess it wasn’t bad in the end to finish where we did, to come back through the traffic a minute behind the leader.”

Russell accepted that he was responsible for the accident “to the letter of the law,” but insisted that “from the second I braked, I was on the limit of my car and there’s nothing more I can do”.

“I had a car ahead of me – we know the cars have improved a lot in turbulent air, but there’s still turbulent air,” Russell continued. “He squeezed me onto the kerb. I’m already on the limit and that pushed me bit wide again.

Following a weekend of heightened tensions between drivers and FIA’s race control team over perceived inconsistencies, Russell says drivers will be looking for further discussions with F1’s race directors about the rules of racing.

“I think between us we’re all going to review a load of incidents and as drivers we need to give our feedback if that should have been penalised or not. Hopefully that gives the stewards a better indication of our feelings. We just all need to be on the same page.”