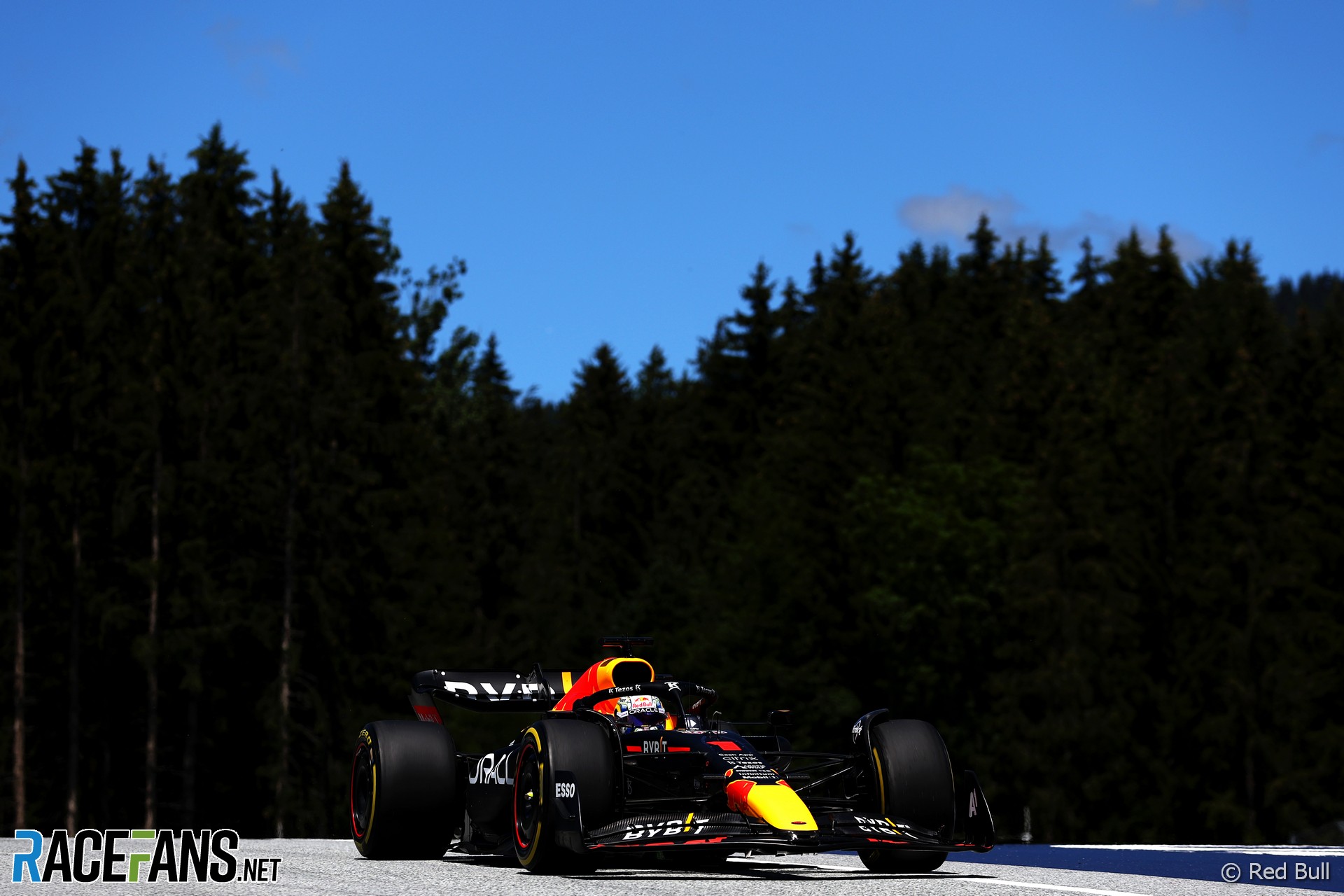 Max Verstappen was quickest in the only practice session ahead of qualifying for the Austrian Grand Prix, ahead of his championship rival Charles Leclerc.

The Red Bull driver’s best time of a 1’06.302 set on soft tyres was three tenths faster than Leclerc managed in his Ferrari. The two Mercedes of George Russell and Lewis Hamilton, separated by the second Red Bull of Sergio Perez, followed them on the timing sheets.

Bright, sunny Spielberg skies greeted the drivers as the first of only two hours of practice for the weekend got underway. Air temperature sat at a comfortable 18C, with track temperature just under 38C as the only practice session before qualifying began.

All 20 drivers were quick to take to the track when the circuit opened, with everyone heading out for their first laps on medium tyres. Daniel Ricciardo was warned of a 20km/h tail wind down the hill approaching turn three, with Pierre Gasly reported feeling the effects of wind along the many long straights around the Red Bull Ring. Perez ran wide at turn six and partly onto the gravel, likely having been caught out by the tail wind.

Verstappen set the early pace using the medium tyres to set a 1’07.496. Leclerc was second fastest for Ferrari, but over half a second behind, while Fernando Alonso was third in the Alpine, a further two tenths slower than Leclerc.

Lando Norris suffered an early problem in his McLaren, falling into ‘limp home’ mode, but managed to get the car back up to racing speeds soon after, saving him from having to abandon his run. But almost 20 minutes into the session, Norris pulled off circuit on the approach to turn six, reporting smoke coming from inside the cockpit of his McLaren. The session was stopped for almost ten minutes while Norris’s car was recovered.

When the session resumed just before the halfway point, many drivers headed out on the soft compound tyres.

Carlos Sainz Jnr used the softs to set a 1’07.1 to go quickest in the session, before his time was beaten by team mate Leclerc by almost half a second. But Verstappen’s first effort on the softs saw him return to the top of the times, posting a 1’06.302.

The red flags came out a second time with 20 minutes remaining as part of the artificial grass on the exit of turn six appeared to come loose, leaving a small piece of debris on the racing line where it was later driven over by Alexander Albon’s Williams. The debris caused no damage to Albon’s car, however, and the loose strip of kerbing was removed before the session resumed.

The traffic problems that led to so many incidents at the final sector during last year’s qualifying session appeared to recur again during the final 15 minutes of running. Verstappen had to avoid traffic bunched up around turns nine and ten multiple times in the final minutes, with Valtteri Bottas running off the circuit to try and keep out of the Red Bull’s way. Gasly was also unhappy with Sainz getting in his way as he began a flying lap out of the final corner.

Neither Verstappen nor Leclerc improved in the final laps of the session, leaving Verstappen as the fastest driver when the chequered flag fell.