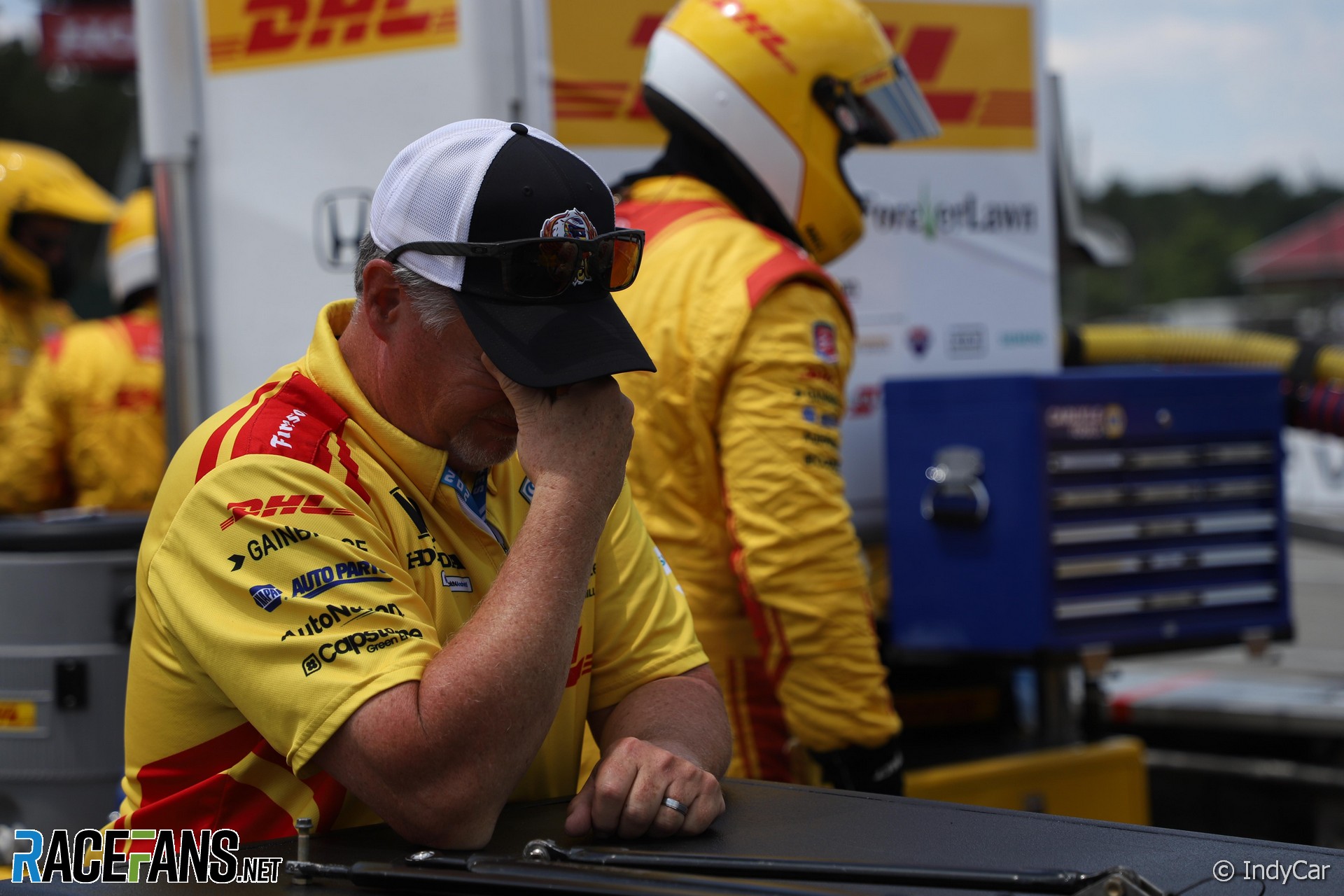 Scott McLaughlin’s Mid-Ohio victory, with his mother and father watching from the stands, was undoubtedly special. So too was the indomitable willpower of Will Power as he salvaged third place after dropping to last on the first lap.

But these positive stories were eclipsed by truly awful weekends for two of the series’ top teams.

Every IndyCar fan and observer has had time to observe, digest, analyse, and form an opinion on the soap opera that was Andretti Autosport’s mutinous collapse.

There’s the initial contact between Romain Grosjean and Alexander Rossi at the tricky Keyhole corner, which preceded the much more severe clash that sent Rossi mowing through the gravel and an incensed Grosjean into the tyre barriers. Don’t forget about Grosjean and Rossi having a minor collision just before a subsequent safety car restart, either.

Then there was Grosjean tagging Colton Herta from behind, sending Herta spinning out – after the American driver’s race was already compromised when his team didn’t bring him in to the pits before a caution flag was waved for the stranded car of Tatiana Calderón. Moments later, Rossi collided with rookie team mate Devlin DeFrancesco, who had been driving the cleanest, least assuming race of the Andretti quartet, prior to the incident.

And of course, there’s the post-race nuclear fallout. Grosjean calling Rossi an “absolute idiot”, before being whisked away by a team representative. Michael Andretti himself chasing down Rossi via scooter before a verbal confrontation with Alexander’s father, Pieter Rossi.

If anything, it’s drawn more onlookers to gawk at the smouldering crater that was left behind. McLaughlin what was on everyone’s minds after the race: “That’s been building all year,” in regards to the Andretti mutiny. Acrimony between Grosjean and the soon-to-be-departing Rossi is no longer a concealed matter, and it has claimed Herta and DeFrancesco as collateral.

Before Calderón’s car came to a stop at turn four on lap 53, Herta was running third, Rossi and Grosjean ninth and tenth. Herta would finish as the team’s best driver in 15th, DeFrancesco 17th, Rossi 19th and Grosjean 21st.

It’s not hard to come to the conclusion that Andretti Autosport’s campaign has been a disappointment compared to pre-season expectations. Even more so when you consider that the organisation has been putting together a plan to race in Formula 1, and agitating to break into the sport’s closed shop of 10 franchised teams against resistance from the existing competitors.

But, fairly or not, people will look upon what transpired within the Andretti fleet and come to the conclusion that this is a team that is already over-exerted within the ranks of IndyCar, failing to produce the results befitting of a member of the sport’s traditional “big three”.

That’s before getting into the dilemma of Herta himself, touted as the greatest potential F1 prospect to come out of America since Rossi seven years ago. He sits tenth in the championship table, more than 100 points behind Marcus Ericsson.

Herta now needs to have a perfect finish to his 2022 season just to scrape into the top five in the standings and achieve the bare minimum of 40 superlicence points to qualify for a Formula 1 seat. That would be a far cry from the likes of Jacques Villeneuve, Juan Pablo Montoya, Cristiano da Matta, and Sebastien Bourdais punching their tickets from IndyCar to F1 with dominant, title-winning seasons on their CV.

McLaren CEO Zak Brown has, surely, prepared a bouquet of flowers and a beautiful basket of loving gifts for his business colleague Michael Andretti. Because if not for that disaster taking up all the headlines and gossip, there would be more attention being drawn to the other smouldering crater right beside the blast radius of Andretti’s nuclear meltdown: On a day when a win and two cars on the podium seemed assured for McLaren SP, the day ended with a double retirement for drivers Pato O’Ward and Felix Rosenqvist.

Rosenqvist’s demise was quick and painless, when he dropped out of third place with his car billowing smoke until it ground to a halt at turn four. But it brought a premature end to a race that had promise of at least a podium – if not a victory, given that he was starting the race on the harder, primary compound tyres.

That was a result that Rosenqvist desperately could have used to make his case for staying with McLaren SP for a third season. Yes, the Swedish driver is signed to race for McLaren in a role to be determined next year, but the ambiguity of it all suggests – no, screams – that they see Rosenqvist as a driver they’ll reluctantly settle on bringing back to IndyCar next year if they can’t sign away another free agent instead.

Pato O’Ward, who has F1 ties and ambitions of his own after signing a new long-term contract extension two days before the Indianapolis 500, had a great opportunity to win from pole and put himself back within striking distance of Ericsson, Power, and Josef Newgarden at the top of the table. If Andretti Autosport are failing to live up to their billing as a ‘big three’ team, then McLaren SP are the best-equipped to take their place behind Team Penske and Chip Ganassi Racing – in terms of resources, and most importantly, results.

But thanks to a fuel delivery problem that began just before O’Ward’s first pit stop, and got worse until his car came to a stop at pit exit after 53 laps, the team’s ace was left with miniscule points and a 24th place result, to go along with 27th (and last) for Rosenqvist.

Instead of winning at Mid-Ohio and climbing to as high as third, or even second in the standings with eight races remaining – O’Ward dropped from fourth to fifth in the table and is now 65 points behind Ericsson after two straight retirements due to mechanical failures. Rosenqvist is clinging to a place in the top ten in the standings.

This massive failure wasn’t self-inflicted, but it can be argued that with Andretti Autosport’s season all but lost, McLaren SP may have had a more consequential and damaging disaster on their hands at Mid-Ohio that could prove to be the difference between O’Ward being presented the Astor Challenge Cup as series champion at Laguna Seca or not, and the difference between Rosenqvist partnering O’Ward and Rossi in IndyCar next year, or moving back to Formula E – where, ironically, he could still do battle against Andretti Autosport.