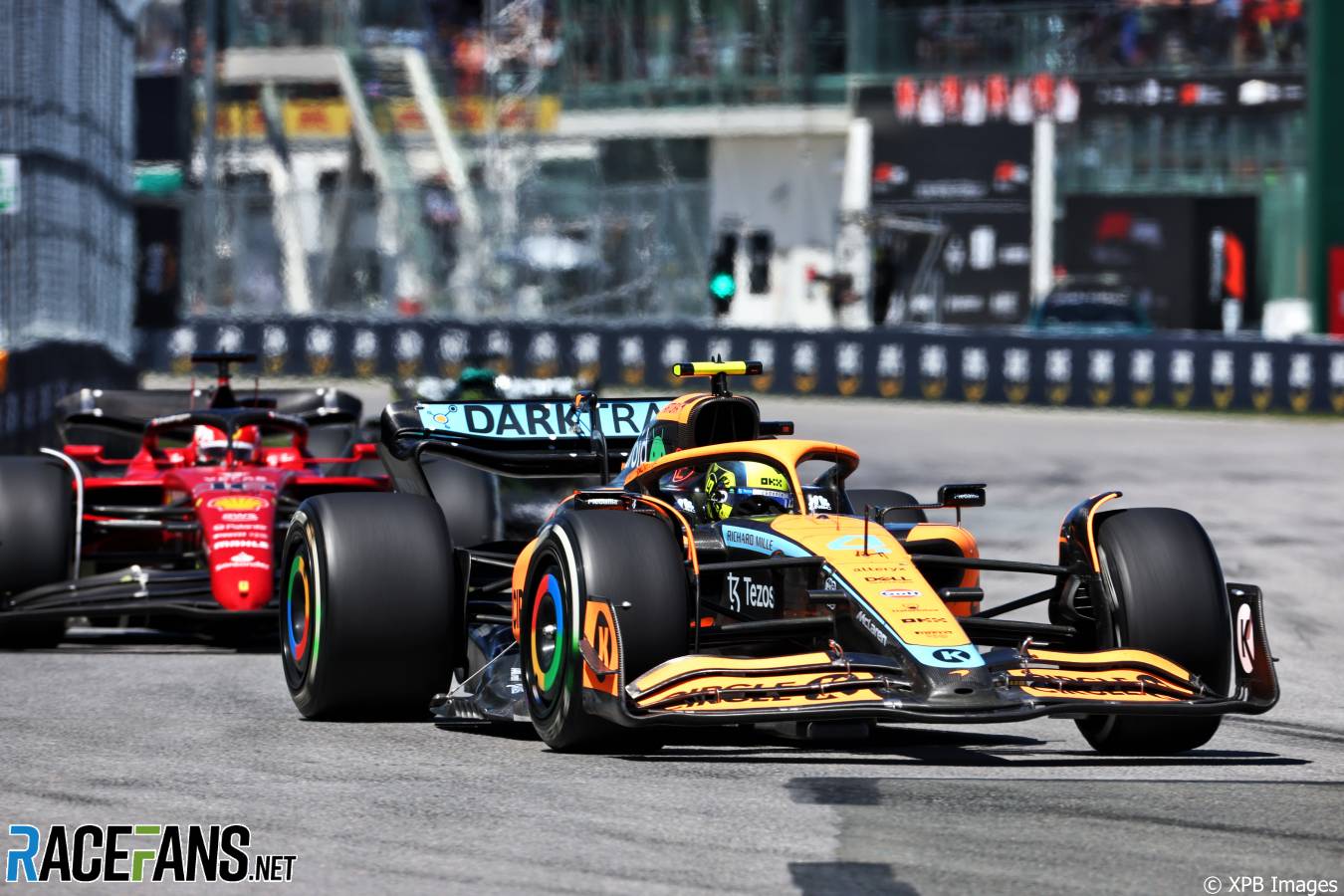 In the round-up: McLaren are hopeful of avoiding any penalties for exceeding their power unit component allocations despite the problem Lando Norris encountered during the Canadian Grand Prix weekend.

McLaren team principal Andreas Seidl says the team is not concerned about power unit reliability despite the problems they encountered in Canada. Norris had to abandon his qualifying effort during Q2 and both McLaren drivers were “managing parameters” during the final phase of Sunday’s race.

“What happened on Lando’s PU was a sensor that was causing a loss of power and a misfire, that we had in Q2,” Seidl explained. “We took the decision to switch then the power unit back to the other one, which is in the pool, in the morning. So we’re still on two PUs.

“We expect that the power unit can be repaired and therefore, for the moment, there is no sign that they couldn’t finish the season this year with three power units.”

Esteban Ocon welcomed reports Nice could take over as the venue for the French Grand Prix. F1 is not expected to return to Paul Ricard after next month’s race.

“I was very happy to read this,” said the Alpine driver. “I think obviously it’s a bit sad to lose Ricard, it’s a bit of our home. But you know, if we can find a solution to to keep a French Grand Prix and around Nice, back-to-back Monaco and Nice [is] not too bad.”

McLaren has announced a new, multi-year sponsorship agreement with Goldman Sachs, which specifically lays out that the two will work together to meet environmental goals.

As part of the agreement, Goldman Sachs will help McLaren move forward on its plan to halve its greenhouse gas emissions by 2030 and reduce its carbon production to net-zero by 2040.

The Mercedes F1 team has partnered with social mobility and educational charity The Sutton Trust to make its expertise available to high performing students as part of its Accelerate 25 programme.

The Sutton Trust helps to encourage students who come from underprivileged backgrounds but have strong school results. Its student will visit Mercedes’ Brackley factory and members of the team will participate in panel debates, university sessions and engineering days, take part in residential summer school programmes, run practical workshops and assist with university applications.

Shoulda, coulda, woulda. I think a points finish might just have been on the cards had everything gone perfectly in qualifying and on race day, but any number of drivers could say the same. The truth is we did not have enough pace in Canada. And I have to hold my hand up to mistakes.

McLaughlin: 'I had an idea that the car would act like it would at Gateway, but it’s a different beast. Certainly makes it different to try and tame this track, and I learned a ton off the guys.'

Brown: 'I wouldn’t want to comment on what I think the right number is, but what I would say is the value of an F1 franchise from when the Concorde Agreement was signed to now -- it’s grown rapidly. Ultimately, it’s up to F1 to decide what the right number to buy in is, but what an F1 team was worth three years ago -- it’s significantly more today.'

Celebrating Pride Month and women in motorsport (Females in Motorsport)

'I mean, to see F1 drivers and F1 teams getting on board, not only during Pride Month but outside of that as well, and teams wanting to educate their own staff, it just goes to show that everything is heading in the right direction,' Sarah says. 'Hopefully, things can keep on improving.'

The car is smaller than its Gen2 counterpart and by weighing in at 840 kilograms (including the driver), it’s also 60kg lighter, with 1.7bhp per one kg. This will ensure that the Gen3 car has enhanced agility to match Formula E’s tight and twisty street circuits to improve wheel-to-wheel racing.

From now through July 22, qualified drivers may submit their application to be considered for the scholarship. Included among the benefits is a prepaid full-season entry fee for the recipient into either the IMSA WeatherTech SportsCar Championship, IMSA Michelin Pilot Challenge or IMSA Prototype Challenge for 2023 and 50 percent of the full-season entry fee into one of those series for 2024. Added benefits of the scholarship bring its value to more than $250,000.

After Kevin Magnussen was forced to pit for a replacement front wing early on in the Canadian Grand Prix, Claus J says he could have dodged the black-and-orange flag by backing out earlier:

I’m not against attempting to drive alongside another car for the first corners on lap one. And I don’t think the move was particularly reckless, either. It would probably also have worked in a slightly faster car or against a less brutal opponent. In my opinion that was clearly a racing incident and I wouldn’t even put the majority of the blame on Magnussen.

That discussion is, however, moot. What made the move stupid was the fact, that he would have been passed sooner or later by Lewis anyway – what did he hope to gain? Haas must have known that they would be behind the three faster brands and at least Alonso, so trying to defend eighth and ninth against the likes of Ocon, Ricciardo and Bottas must have been plan A, one would think…

I get that race drivers are made from a competitive material; but a more mature team would have curbed the enthusiasm of their driver and told him to take a boring day at the office after such a qualifying. Sad, really.
Claus J