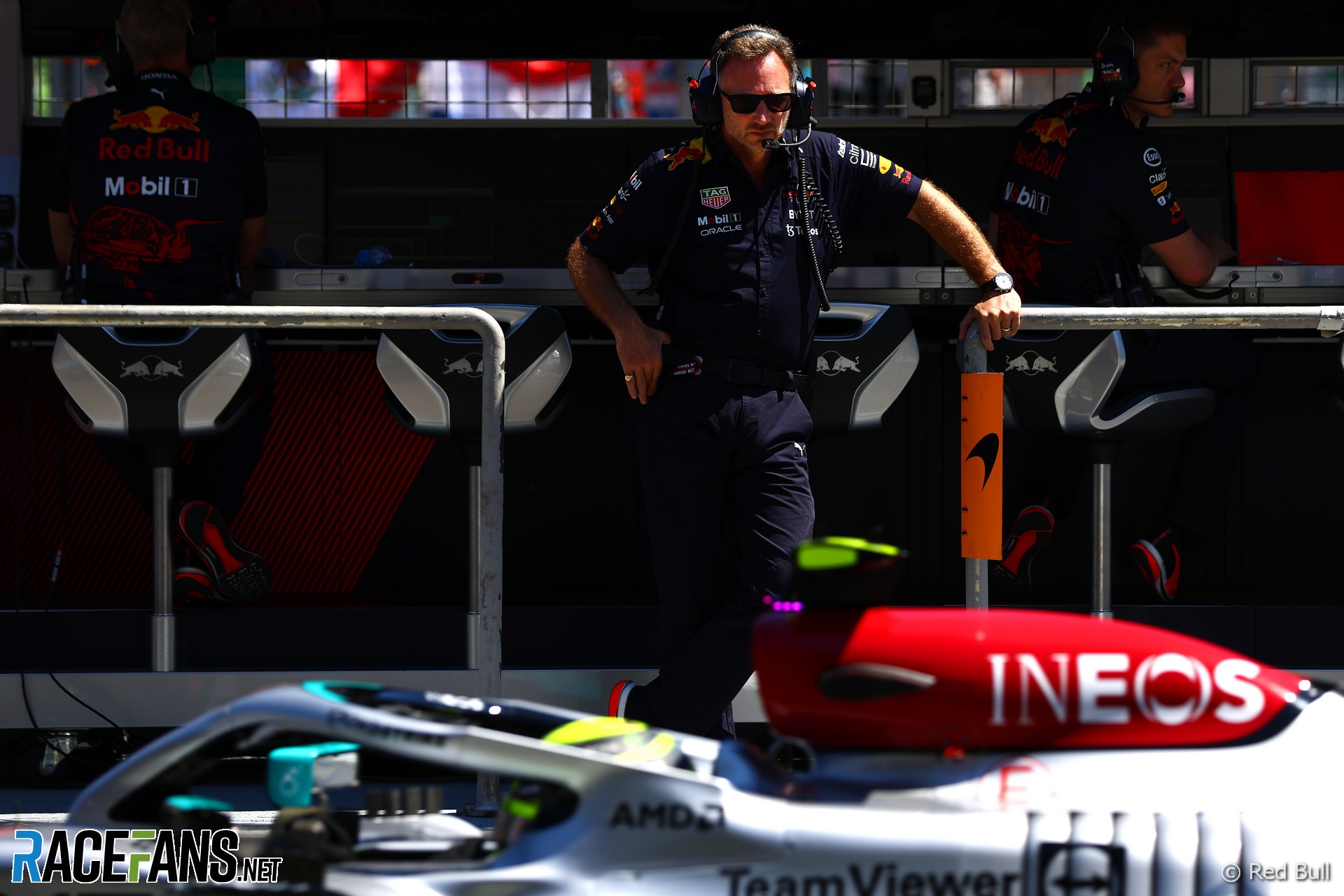 Red Bull team principal Christian Horner says the FIA should not change Formula 1’s rules during the season in response to concerns over porpoising.

The sport’s governing body issued a technical directive to teams this week explaining how it would gather data with a view to restricting how severely cars can bounce, after drivers raised concerns over the effect this year’s cars were having on their health.

The FIA has proposed defining a metric to set a limit on the vertical movement of teams’ cars. James Allison, the chief technical officer of Mercedes, which has experienced particularly severe problems with porpoising and bouncing, raised concerns over that approach. Allison said F1 risks triggering controversial rows unless teams are able to follow the porpoising metrics of their rivals in real-time.

However Horner has accused rival teams of playing up their concerns over the safety effects of porpoising and lobbying the FIA for rules breaks in their favour.

“It’s the same rules for everybody,” he told Sky. “Some cars have the issues, some cars don’t. For the ones that don’t, inevitably, there will be a push to try and get regulations changed. That’s the nature of the game, that’s the nature of Formula 1, and you can understand James and his drivers inevitably pushing for that.”

Instead of changing the rules, Horner called on the FIA to take a hard line on cars which cause severe discomfort to their drivers by disqualifying them.

“It would be unfair to have effectively what we’d deem to be a regulation change halfway through a year because a team has missed a target,” he said. “The emphasis should be on that team, obviously, to sort the issue.

“If the car is dangerous, that’s down to the FIA. They still have a black flag in their armoury. If they deemed the car was dangerous or unacceptable for drivers safety, they would and should black flag it.”

Horner has previously warned sharp rises in inflation will make it impossible for many teams to keep their spending within the budget cap this year. Any rules changes which require them to alter their cars to reduce porpoising will exacerbate that problem, he added.

“If you inflicted something like that, there is a significant cost attached to it and that comes nowhere else other than the development cost, for argument’s sake,” he said. “What we’re talking about with the cost cap is inflation. In the UK they’re talking about 11% of inflation in the second half of the year. That’s due to what’s going on in the world, it’s not something that was predicted.

“It’s a genuine force majeure situation and I think again it’s something down to the FIA to take the appropriate action. Otherwise you’re going to have probably seven teams that break the cap in some shape or form by the end of the year.”

He believes changing the budget cap restrictions mid-season is justified, while alterations to the technical rules are not, because in his view “the porpoising is within the control of a team”, unlike rising costs.

“It’s about the costs of energy. It’s cost inflation. It’s the cost of living. The cost of putting fuel in your car is going up for everybody. It’s a cost of supply of parts, it’s the cost of freight, it’s the cost of electrics, the utilities. They’re things you can’t control and therefore that’s why I think the majority of teams do feel that there’s an issue that needs to be addressed.”