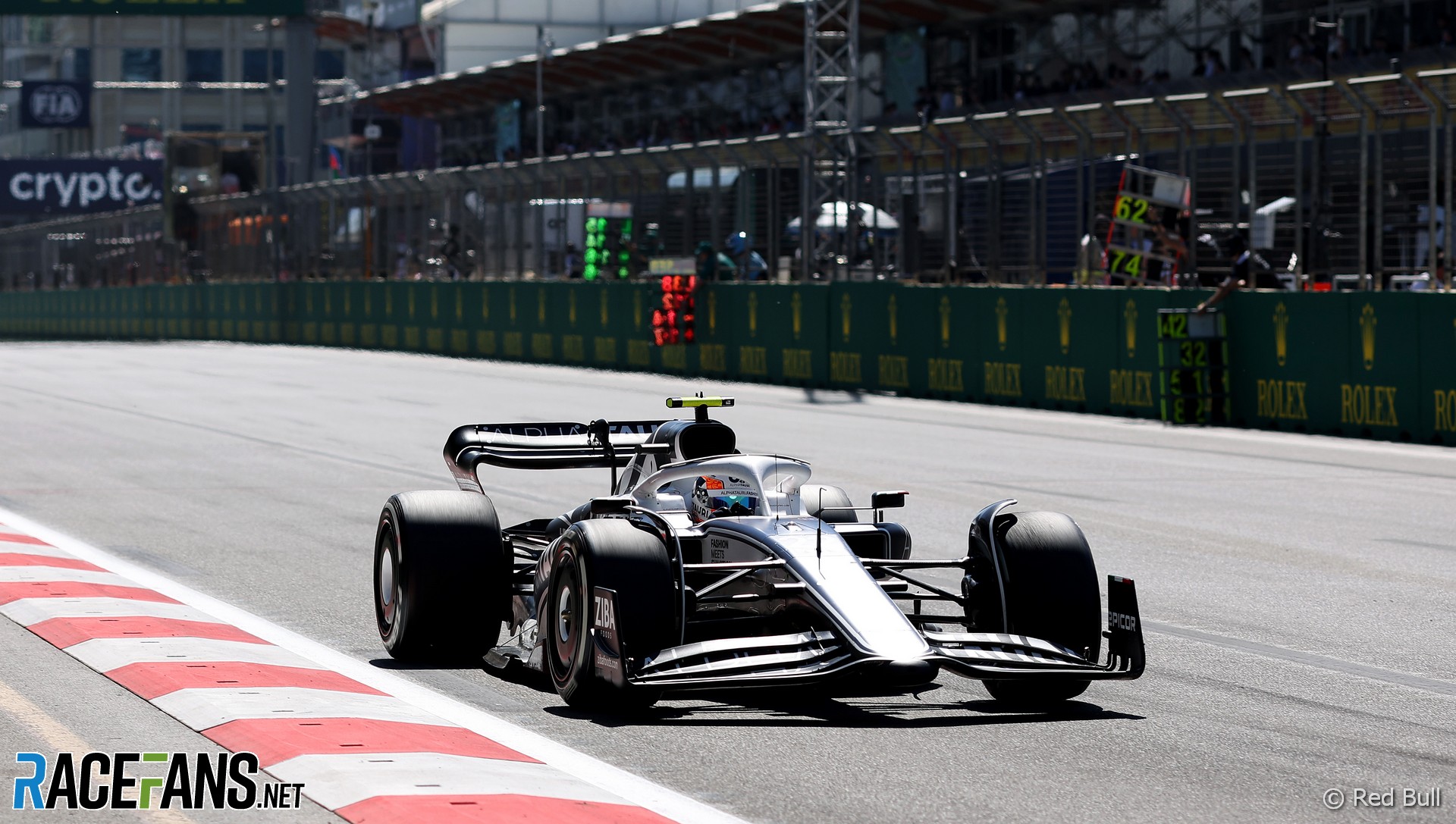 In the round-up: Yuki Tsunoda didn’t realise his DRS was broken until he was ordered to pit so his team could repair it.

Tsunoda was unaware of DRS failure

AlphaTauri driver Tsunoda was shown the black-and-orange flag during the Azerbaijan Grand Prix, requiring him to pit so his team could fix a broken DRS flap. It was taped up and he was sent back out, though he finished out of the points.

“They didn’t tell me what the issue was so I thought it was an engine issue,” Tsunoda admitted after the race. “It was rear wing – I didn’t know that.”

Tsunoda said he would have been happy to continue with the broken wing without pitting for repairs.

“I was running okay pace,” he said. “Until the race director gave me that black-and-orange flag, I could still drive.

“I know as a team you don’t want to take a risk, especially as we have the cost cap. But I hope this was enough reason to come back, to be honest. If it’s only those things, to be honest, we should take the risk to carry that car because I was able to [drive] and I was kind of the same pace as Vettel also.”

Fernando Alonso admitted he expected more incidents during Sunday’s race because the cars were so difficult to drive around the Baku City Circuit.

“Probably. I was expecting more, yes,” said the Alpine driver. “The race was difficult to execute and the cars are so stiff. You can hardly see the corners in some of the braking points, and things like that. So I thought we could make more mistakes between us, between drivers.”

Sergio Perez said he had no problem with being told to let him team mate pass him for the third time in three races, having done so twice in Spain.

His race engineer Hugh Bird told him “no fighting” as Max Verstappen approached to overtake him for the lead. “He was clearly a lot faster at that stage of the race,” said Perez.

“So it was the right call not to fight because I didn’t have any pace at the time and Max deserved to be ahead at that point.

“We also boxed too late. So, there were a few things that played into the result, but still at the end of the day, Max deserved the win, because he was the faster car.

Had a good chat with @DevlinDeFran this morning. We’re all good. Tough day for both of us. That’s racing…

Despite the barbarity called @F1 ended, many roads are still closed, metal nets still obstruct the pavements and traffic jams right in the middle of city continue. It will likely last a month, denizens of will suffer while F1 drivers are probably somewhere having bubble baths.

Devlin Defrancesco: 'You could say I made contact with him, which I did, but from my vantage point it did look like he moved, but we need to look at it better.'

'First of all, it was really annoying to stall,” he remarked. “It’s not a good thing for safety, it’s not a nice thing to be sitting still on the grid when 10 cars are going left and right past you. But on the other hand, it was actually a very good race.

Turnout of 20,000-plus expected for Borders motorsport festival in aid of Jackie Stewart’s dementia charity (The Southern Reporter)

'Lauder’s Thirlestane Castle is hosting the event, titled the Sir Jackie Stewart Classic, this Saturday and Sunday, and among its highlights will be the three-time Formula 1 world champion taking his 1969 Matra MS-80 02 F1 car out for a spin in his native Scotland for the first time.'

Jack Todd: F1 is back in town — lock, stock and yowl (Montreal Gazette)

'You might understand Horner’s decision at the end of the season with a championship on the line, but F1 desperately needs rules to prevent such hijinks at this point in the season, when Perez himself may turn out to be the better driver of the two. Perez should be furious — and so should racing fans in Baku who were deprived of the chance to see an actual race.'

It’s embarrassing FIA goes for such rules, where half the grid is kangarooing over the tracks.

This is not a pinnacle of motorsports, but some soapbox racing. Even my 20 year old street car has more advanced suspension technics, than current F1 cars. That’s what FIA should care about, cause it is devastating for the marketing of F1.

There are many series which look a lot more like motorsports currently. And I am not talking about Mercedes only, but about half the grid, or even all but two-and-a-half teams.
Steven Robertson (@emu55)