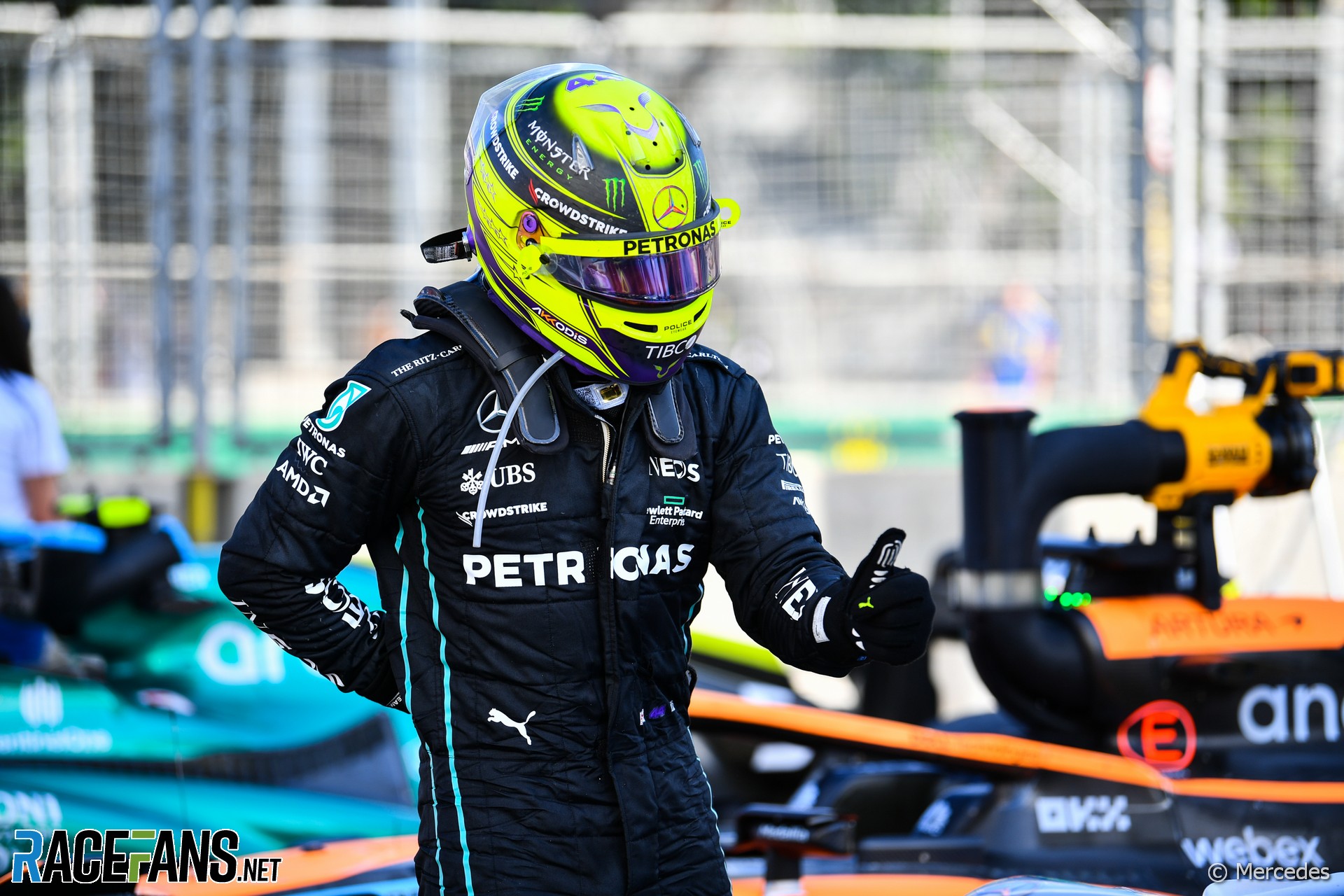 Lewis Hamilton was visibly suffering with his back at the end of a punishing Azerbaijan Grand Prix, which reopened the debate over the physical effects porpoising is having on drivers.

Getting from London to Baku is not straightforward at the moment. Direct flights are infrequent and the charter put on by F1 is booked up quickly. I had to get to the airport at midday UK time, fly to Hungary, wait three hours and then fly to Baku – a good 10 hours later.

A long flight, marred by some delays, meant I landed in Baku at just gone 4am on Thursday morning, a few hours before media duties were due to begin. Nevertheless, as the sun was starting to rise and the dawn chorus sprang into life, I made my way to my hotel to spend my first night – well, morning – before meeting the AlphaTauri drivers later in the afternoon.

Other teams are also using Thursdays to give the media the opportunity to speak to their drivers. I visited Haas to meet Guenther Steiner, Kevin Magnussen – but first Mick Schumacher.

The 23-year-old’s F1 future is growing increasingly uncertain after a series of crashes. I sat to his right, a Netflix camera in my face as he spoke candidly in response to a series of questions regarding his next steps in F1, his hands were clasped tightly on his lap.

His boss was up next, Schumacher sitting a table away as the questions began regarding his future again. Steiner was tough but fair about his driver, giving some straight-shooting responses to the questions.

However he made it clear the team’s parts situation meant it could ill afford further damage. I asked him whether serious conversations would be needed if Schumacher bent another chassis this weekend. Steiner’s reply was simple: “I would say so.” 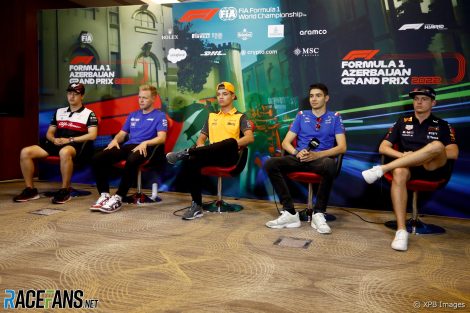 After a fun media event on Thursday evening, I woke relatively early for another of F1’s long 2022-spec Fridays. At least the press conferences got underway at the respectable time of 11:30. The walk into the circuit was pleasant, tall buildings glistening in the sunshine as locals made their way to work, dodging the many road closures that have made way for the circuit.

The media centre is based in the rather swanky Hilton Hotel, where a lot of the teams stay. Walking through the revolving doors I was immediately greeted by a beaming Harry Bull, the McLaren PR, patiently waiting for his driver Lando Norris to head for the first press conference.

After the press conferences were out of the way, I stopped briefly to talk to one of Lewis Hamilton’s security guards, then realised I was in the seven-time world champion’s path. He flashed a smile at me and said hello, before dashing back to the paddock. A rare encounter with a driver who is seldom surrounded by fans or his team if he’s seen ‘in the wild’. 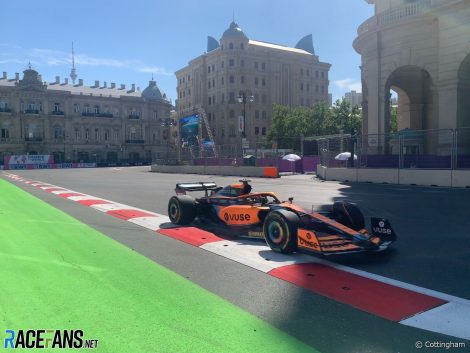 Walking into the press conference room to be greeted by Toto Wolff, I overheard the Mercedes team principal talking about TikTok, of all things. Immediately I jumped in, asking if he was lurking on the social media app somewhere. Laughing he said, “No, but I had to give my email for some sort of verification so who knows…”

Later that day I opted to go trackside, heading to the critical turn 16, the last ‘proper’ corner on the circuit, which sets up the long, flat-out drag to the start/finish area.

On the back of the golf buggy, we whizzed along the edge of the Caspian Sea to the far side of the circuit. Eventually finding a gap in the fence, we were immediately stopped by the police. Explaining we were journalists and pointing to our tabards as proof of our permission to be trackside, we were still met with resistance. After speaking to four different marshals, we finally were allowed through, though we were approached every 10 minutes or so by various people asking where our cameras were.

Qualifying was spent mostly guessing what had happened due to a lack of screens at the media pen for the written journalists. The organisers very kindly offered to arrange one for race day.

Walking through the blistering streets of Baku, I was surprised at how empty the city looked. Usually, on a race day, there’s chaos outside the circuit, with people bustling and rushing to get into the track. In Spain, tailbacks went back for miles, but the ease of walking in with no queues was definitely a bonus at this venue. 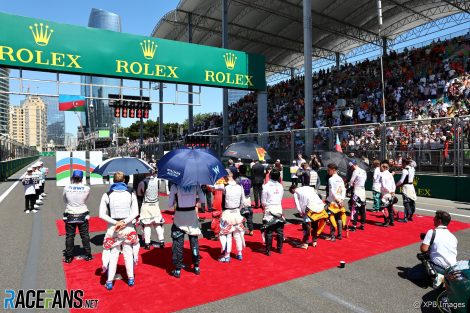 Baku ordinarily has one of the smaller crowds of the season. This year it has been further reduced due to Russia’s invasion of Ukraine, as the two countries form a chunk of its tourism market.

The paddock is a short walk from the media centre but one you need to give yourself time to get to if you’re in a rush. Heading down to the grid for the start of the race, I bumped into Angela Cullen, Hamilton’s physiotherapist, who has been kept busy by the punishment Mercedes’ stiff car and Baku’s bumpy track has dealt to the world champion’s back.

She greeted me with a huge hug and we briefly chatted about female representation in the paddock – a subject we are both passionate about. There are relatively few regular female written media journalists and I’m proud to be able to fly the flag for women in the paddock.

Although those of us in the media pen had gained a television to follow the race on, the screen was unfortunately positioned in direct sunshine, so was rendered almost useless. Nonetheless we were fully alert to the first significant developments of the afternoon, and the early appearance of two glum Ferrari drivers.

After the chequered flag had dropped, Hamilton was the last of the drivers to speak to us. I noticed he was still clasping his back in pain. Considering the circumstances, he was still in relatively good spirits, but you could see the 95-minute hammering from porpoising and the car bottoming out had taken a toll on him and many of his colleagues also.

I asked him how he was feeling, and he admitted it was one of his toughest races ever. “I don’t want to have that bouncing again,” he winced. “I’ll do anything to avoid having that again.” But a subsequent chat with Red Bull team principal Christian Horner offered an entirely different take on the porpoising debate.

With that, we were done for the weekend. A largely unexciting race had nonetheless provoked some interesting storylines as Formula 1 heads for a long-overdue return to Canada this coming weekend.