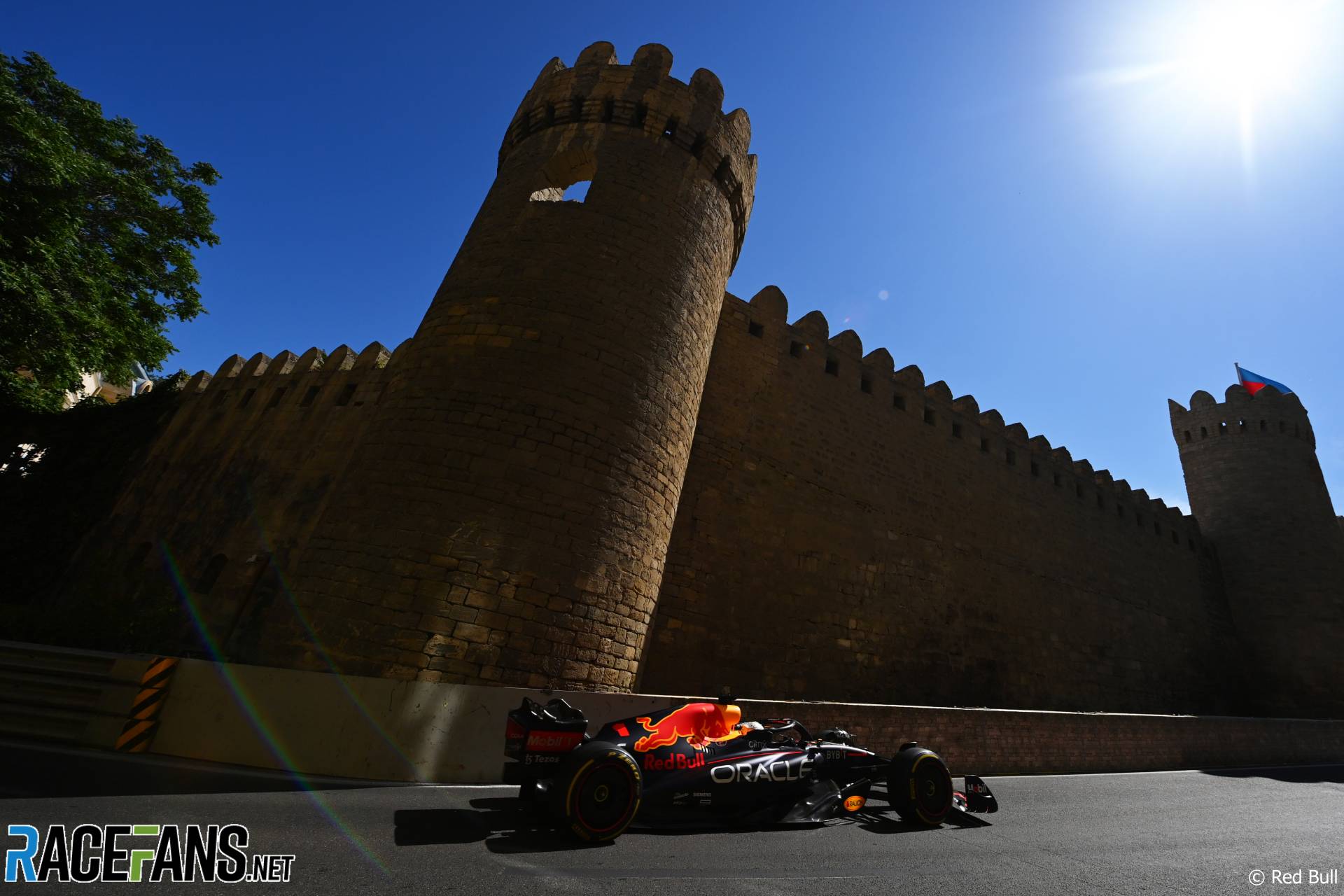 Max Verstappen claimed a comfortable victory in Baku after Charles Leclerc retired from the lead with a power unit failure.

Both Ferraris of Leclerc and Carlos Sainz Jnr retired with mechanical faults in the first half of the Azerbaijan Grand Prix, allowing Verstappen and Red Bull team mate Sergio Perez to take an unchallenged one-two finish.

Track temperature was approaching 50C when the field lined up on the grid, with Leclerc on pole position and Perez alongside on the front row. All drivers who lined up in the top 10 opted to start the race on the medium compound tyres.

When the lights went out, Leclerc locked up under braking for the first corner and ran slightly wide, allowing Perez to sweep through into the lead. Behind, Verstappen and Sainz held their third and fourth positions, with Russell, Gasly and Hamilton in seventh.

Over three laps, Perez pulled over two seconds away from Leclerc in second, while Verstappen in third began putting his closest championship rival under pressure. However, the Red Bull was seemingly unable to get close enough even with DRS to attempt a pass on the Ferrari.

On lap nine, Sainz suddenly lost power in his Ferrari and pulled off the circuit at turn four, bringing out the Virtual Safety Car. Leclerc pitted from second place for hard tyres, but despite a slow stop, he rejoined in third place. Behind, Gasly, Hamilton, Sebastian Vettel and Yuki Tsunoda all pitted for hards, with Vettel jumping ahead of Hamilton through the stops.

With Leclerc out of his way, Verstappen began catching his team mate, the race leader as Leclerc, on hard tyres, began lapping over a second quicker than Perez, 12 seconds off the lead. Further back, Vettel ran off the circuit trying to pass Esteban Ocon for ninth, losing tenth to Hamilton.

At the end of lap 14, Verstappen had caught up to the rear of his team mate. Using DRS along the main straight, Verstappen slipped to the inside of Perez, who did not put up much resistance, to take the lead of the race. Perez immediately lost two seconds to his team mate over the course of the next lap and Perez pitted for hards at the end of lap 16, but lost around three extra seconds through a slow stop before rejoining in third behind Leclerc.

Verstappen eventually pitted at the end of lap 18, switching onto the hard and rejoining ahead of team mate Perez in second, around 14 seconds behind the new race leader, Leclerc.

Verstappen began setting purple fastest sectors in pursuit of the leader, but then, on lap 20, smoke suddenly began billowing from the rear of Leclerc’s Ferrari along the main straight. The leader pulled into the pit lane and out of the race, promoting Verstappen into the lead, Perez to second and Russell’s Mercedes to third place.

With no Ferrari to worry about, Verstappen steadily pulled out lead over Perez. Such was his advantage, Verstappen’s race engineer Gianpiero Lambiase asked his driver to reduce his pace to help save his tyres.

On lap 33, Kevin Magnussen became the fourth Ferrari-powered car to pull out of the race with a mechanical problem after the two works Ferraris and Zhou Guanyu’s Alfa Romeo. The Virtual Safety Car was deployed, allowing the top three of Verstappen, Perez and Russell to all pit for a second set of hards, with Hamilton also pitting and rejoining in sixth behind the two AlphaTauris, who remained out.

With Hamilton’s fresh tyres to his advantage, he passed Tsunoda to take fifth, before heading off in pursuit of Gasly in fourth. By the end of lap 42, Hamilton was tucked into the slipstream of Gasly’s AlphaTauri and two laps later, Hamilton relieved Gasly of fourth using DRS on the run to turn three.

Out front, Verstappen had established a lead of almost 20 seconds over Perez. He ticked off the remaining laps to cross the line and claim his fifth victory of the season and fourth in the last five races. Perez finished second, over 20 seconds adrift of his team mate by the chequered flag.

Russell finished third to complete the podium, 45 seconds behind Verstappen, with Hamilton finishing fourth behind his team mate. Gasly claimed fifth for AlphaTauri, ahead of Vettel and Fernando Alonso in seventh. The two McLarens of Daniel Ricciardo and Lando Norris finished eighth and ninth after McLaren imposed team orders to hold position, with Esteban Ocon taking the final point in tenth.