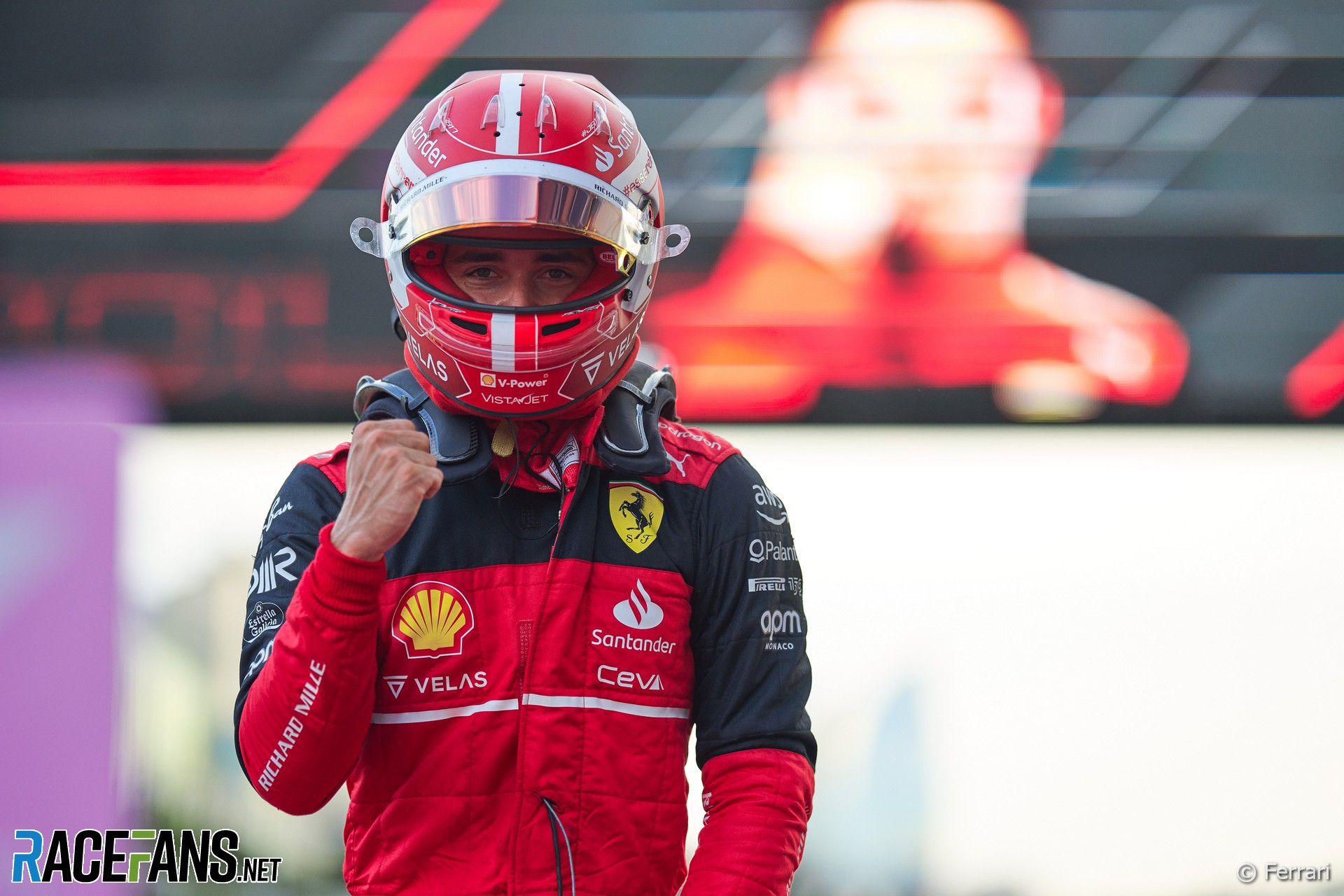 For the fourth grand prix Sunday in succession, Charles Leclerc will lead the field off the grid from pole position when the lights go out in Baku for the Azerbaijan Grand Prix.

But despite taking five poles from the first seven rounds of the season, he has only converted two into wins. None of his last three poles have yielded a win.

In Miami, he was simply out-raced to the flag by the faster Red Bull of Max Verstappen. In Spain, a comfortable victory seemed assured until a sudden turbo failure ended his hopes. Last time out in Monaco, a long-awaited home race win was denied through a combination of unhelpful backmarkers and poorly-judged calls on the Ferrari pit wall.

Having secured yet another pole with his final lap in Q3 to deny Red Bull on Saturday once more, it’s little surprise that Leclerc is desperate to finally convert pole position into victory at the fourth consecutive time of asking.

“I just want to finish the job,” he said.

“The past two weekends I’ve already said that on the Saturday and it didn’t happen on the Sunday. So we need to make it… I mean, we don’t need to make it work but it will be very nice if we’ll make it work tomorrow. Let’s see how it goes in the first few laps, and then I will try to keep the lead.”

Ferrari and Leclerc have been considered championship contenders since winning the opening race of the season in Bahrain, but Red Bull have taken the chequered flag first the last four rounds. Do Ferrari think they can keep their rivals behind them in Baku?

“We know that, in race trim, our closest rivals are quicker than in qualifying,” explained Ferrari racing Laurent Mekies. “Maybe they have the edge over us when it comes to straight-line speed.”

“However, given what we have seen so far this weekend, I think the smallest detail can make the difference in the race, with many factors coming into play. The first of these is tyre management and as we can expect very hot conditions, race pace will be key.”

In a typical race, Red Bull would be feeling fairly confident about their opportunity to bring the fight to Ferrari by splitting Leclerc off from his team mate Carlos Sainz Jnr. However, Baku is anything but a normal race, with the difficult, tight corners lined by barriers looking to punish any error. That challenge has been made even harder by the ground effect cars of 2022 amplifying the impact of the bumpy streets.

With a high chance of Safety Cars or even a red flag or two to throw strategy out of the window in the blink of an eye, Red Bull know that staying calm and making the right decisions at the right time will be just as crucial to them beating Ferrari than their outright pace.

“The run to turn one is super-short, so there’s not a lot you can do there,” said Verstappen, who will start from third on the grid.

“Ferrari put in some really quick laps and it looks like they have a good pace, let’s hope we can put some good pressure on them. Past races in Baku have shown that a lot of things can happen, we just need to stay calm and focus on having a good race tomorrow.”

If it turns out to be a relatively uneventful and conventional race – that Baku’s inaugural race back in 2016 proved to be – then tyre strategy will once again be critical.

Many times this season, Pirelli’s softest compound for the weekend has been relegated to a qualifying-only tyre, teams avoiding the red-walled rubber as if it emitted some kind of dangerous radiation. In Saudi Arabia, Australia and in Miami, sticking to the harder of the three compounds was the fastest route the finish. However, with the softest combination of tyres chosen for Baku, that may not be the case this weekend.

“The soft tyre was the focus of FP3, which took place at the same time of day as Sunday’s race,” explained Pirelli’s Mario Isola, “so we can expect it to play a prominent role.

“There are a few different options for strategy, but a one-stopper seems to be the clear way forwards on paper. Interestingly, many teams have kept back two sets of hard tyres for the race, perhaps thinking of the possibility of red flags or other disruptions.”

One driver who will not benefit from a second set of hard tyres is AlphaTauri’s Pierre Gasly. However, starting from his season-best grid position of sixth, Gasly seemed almost giddy at the thought of the opportunities that could present themselves over the 51 lap race, having finished third at this race last year.

“Everything is possible here in Baku,” said Gasly. “We saw that last year with our podium.

“It’s very easy to make mistakes on this track, we normally see a lot of red flags, so we’ve got ourselves in a good starting position to capitalise on anything happening at the front. We’ve got one set of hards compared to other teams that have two, so we’ll have to see in terms of our strategy what we want to do, but today I’m really happy with our overall performance.”

Gasly will lined up between the two Mercedes of George Russell and Lewis Hamilton, starting from fifth and seventh, respectively. After the major upgrade package introduced in the Spanish Grand Prix, fortunes were supposed to start changing for Mercedes. However, over a second off the pace of Leclerc on Saturday, there was little for Mercedes’ trackside engineering director Andrew Shovlin to take heart from.

“We’d hoped that the car would have been easier to work with here than in Monaco but it’s not, and being realistic, the drivers did a very good job to qualify fifth and seventh,” he admitted.

“We did change quite a lot overnight and were able to improve a few areas of performance – our straight-line speed certainly looked a little better today. However, the gaps to Ferrari and Red Bull are huge and it’s the corners where we are losing the most. We’ve definitely got problems with bouncing on the straights but without that, we’d still be lacking performance, so we clearly need to work on a number of fronts.”

But four places and 1.3 seconds further ahead, Leclerc will prepare for one of the most difficult races he will face this season having given himself the best prospect possible of finally taking that elusive third win of the season.

“I really look forward to the race,” he said. “I love street tracks and it’s very special to push to the limit with the walls.

“Tyre management will be key. It’s an element we have managed well in the past two races, so I am optimistic and just want to finish the job.”

Will Charles Leclerc finally get his third win of the season in Baku? Or will the rapid Red Bull prove too much for Ferrari to contain?

Share your views on the Azerbaijan Grand Prix in the comments.