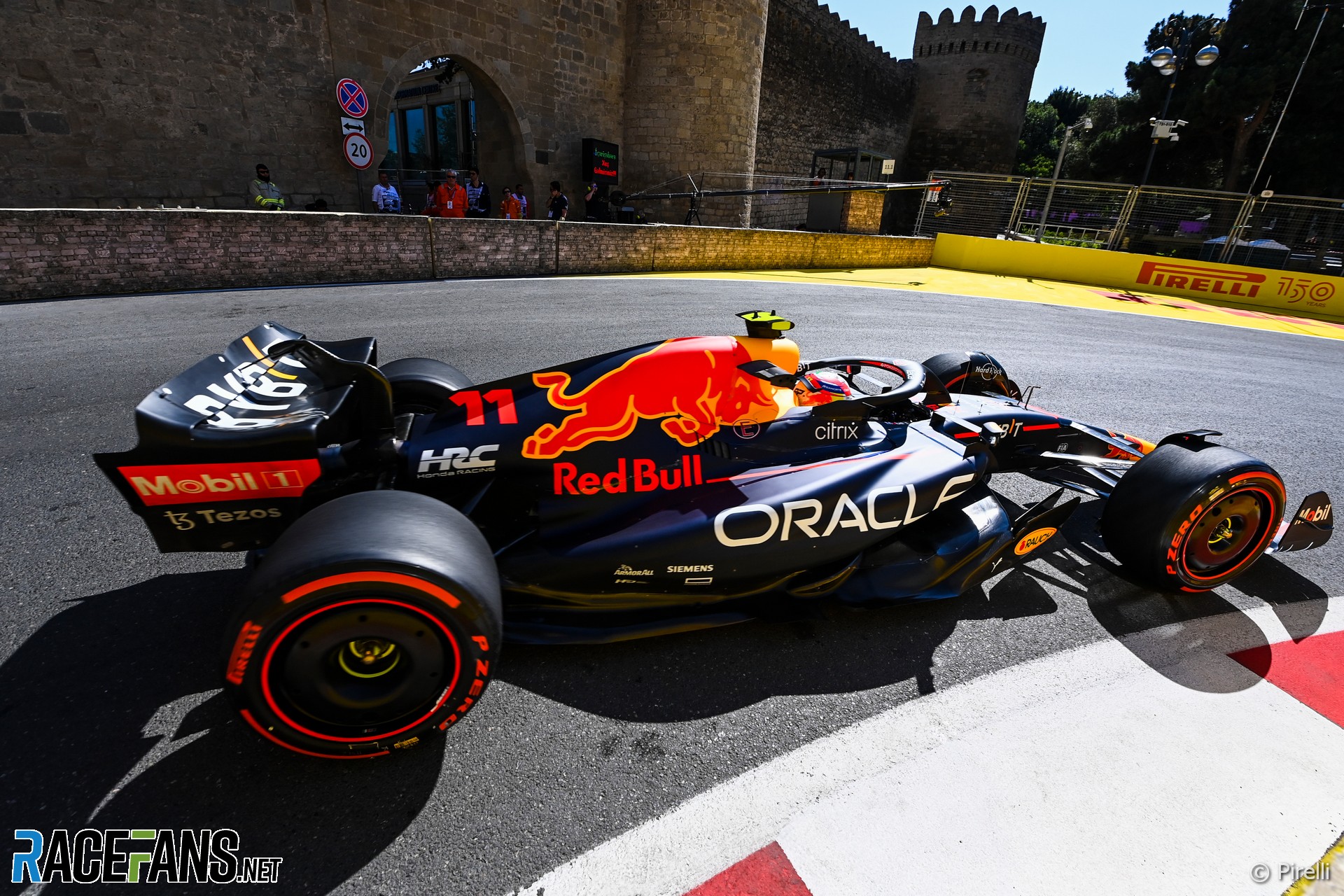 Sergio Perez set the fastest lap in the final practice session ahead of qualifying for the Azerbaijan Grand Prix in Baku.

Perez’s best time of a 1’43.170 was just 0.016s quicker than Charles Leclerc in the Ferrari. Max Verstappen ended the final practice session in third position after his final timed lap was ruined by traffic.

The session’s start was delayed by 15 minutes due to repair work on the TecPro barriers on the exit of turn one. This was caused by a crash at the end of the Formula 2 race held prior to third practice.

When the session eventually began, there was very little in the way of track action to begin with. Aston Martin sent both Lance Stroll and Sebastian Vettel out to scrub a set of tyres, but called both cars back to the pit lane before setting any representative times.

After 10 minutes, drivers eventually began to take to the circuit. Ahead of qualifying, many drivers carried out runs on the soft compound tyres as they looked to dial in their cars for Friday’s crucial timed session. Once the majority of the field had clocked genuine lap times, the two Ferraris were quickest, with Leclerc’s 1’44.661 just under a tenth faster from team mate Carlos Sainz Jnr.

Then it was the turn of the Red Bulls, Perez going fastest of all by two tenths of a second, before team mate Verstappen became the final driver to set a time and jumped up to second with a time half a tenth off Perez’s benchmark. Leclerc would then reclaim the top spot with a lap time of 1’43.514.

With just under 15 minutes remaining in the session, Leclerc ventured out on another set of soft tyres and improved his own best time by two tenths of a second. The Red Bulls’ efforts were scuppered by a yellow flag in turn three, when Valtteri Bottas ran through the escape road at turn three. Once Bottas was safely back on the circuit, Red Bull had another opportunity and Perez used it to set a new fastest lap of the session, seven-hundreds faster than Leclerc.

In the final minutes of the session, Verstappen set the fastest first sector, but had to abandon his lap when he caught the slow Alpine of Fernando Alonso on the apex of turn 12, much to the world champion’s disgust. At the chequered flag, Perez again went quickest in the opening sector, but failed to improve his overall best time when he caught Alex Albon’s Williams along the final sector. Despite a close slipstream from the Williams, Perez failed to improve by a tenth of a second.

Perez’s personal best time was still enough to see him end practice fastest for the second time this weekend. Leclerc was second, ahead of Verstappen who had to settle for third once again. Sainz was four tenths adrift of Perez in fourth, with the two McLarens of Lando Norris and Daniel Ricciardo fifth and sixth.