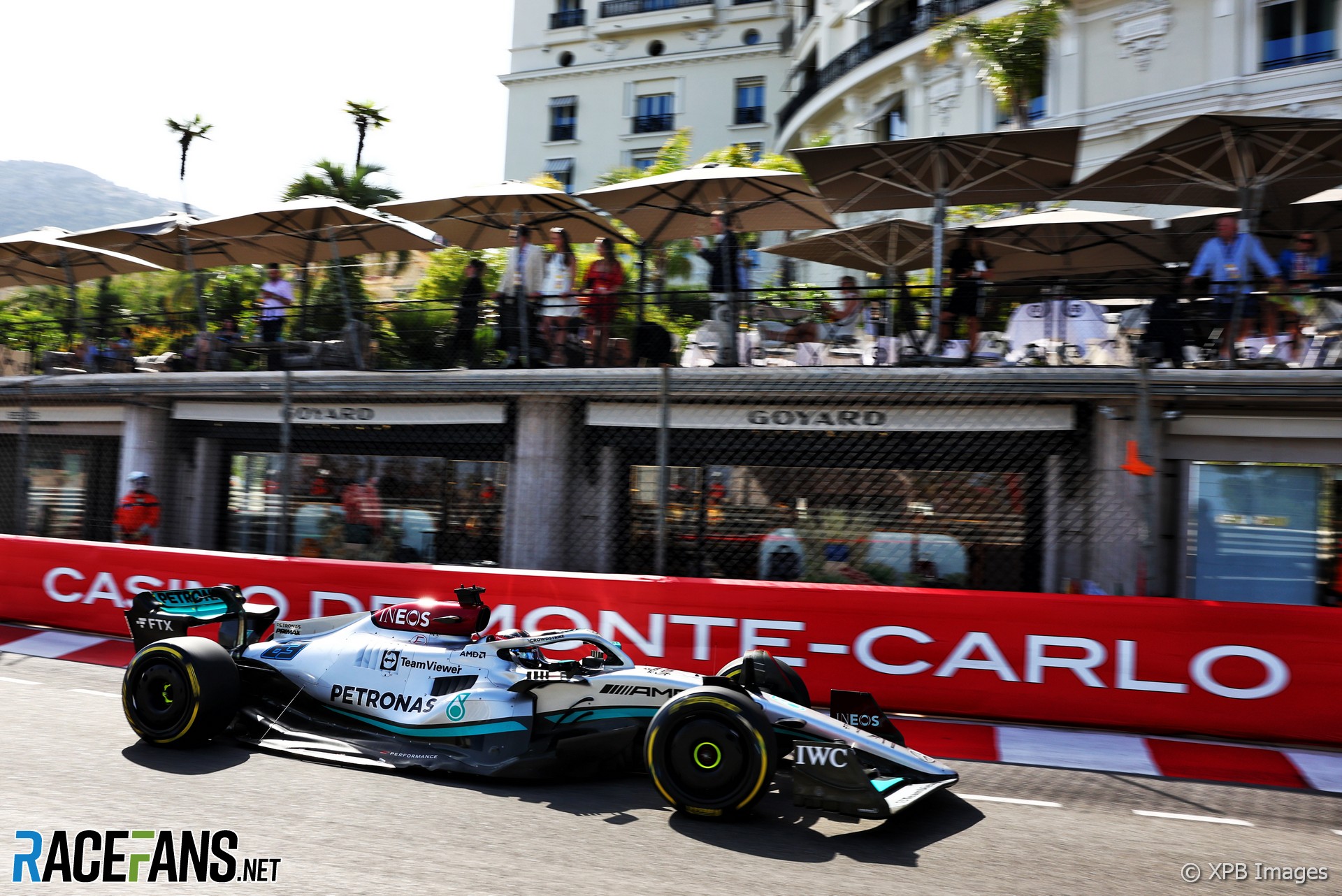 In the round-up: George Russell says that the Monaco Grand Prix “is not going to be pleasant” for Mercedes due to how stiff the car is over bumps

Russell expects Monaco is “not going to be pleasant” to race

Despite qualifying sixth on the grid for today’s Monaco Grand Prix, Russell anticipates an uncomfortable race for him and team mate Lewis Hamilton due to their car’s stiff ride problems.

“It’s not going to be pleasant to be honest,” said Russell. “FP1, when we didn’t have the car at its softest, was a real challenge for both Lewis and I. And it’s kind of tough, but you’ve got to sort of suck it up and get on with it. That’s all we can do.

“This was by far the hardest Monaco I’ve ever experienced – and I’ve been in one of the most challenging cars there was to drive in recent times. So I think it’s not been easy for everybody. I think it’s been a step worse compared to the previous era of cars.”

Williams’ head of vehicle performance Dave Robson says that the red flag called during Q1 did not originally show up on teams’ pit wall systems.

The first phase of qualifying was halted with just under two minutes of time remaining when Yuki Tsunoda hit the barrier on entry to the Nouvelle Chicane and punctured a tyre. But when race director Eduardo Freitas called for the red flag, Robson says, the teams did not receive a notification.

“Certainly that one at the end of Q1 surprised us a bit because it didn’t come up on the system,” said Robson.

“I don’t know whether that means race control hadn’t pressed the button or there was a problem with the system, but the first we knew was Nicholas saying on the radio our initial response was ‘no, it’s not – carry on’, to which he said, ‘no, we can definitely see the marshals waving the red flags’. So we had to stop and then it went on the system.

“To be honest, I’m still not hundred percent sure exactly what it was for. I think if there was something on the track, or something in the wall, then there probably was no choice. But it was a slightly odd way it came about.”

Jehan Daruvala had to react very quickly to Jake Hughes stalling ahead of him on the Monaco start line. Hughes, who led the partially-reversed grid for the sprint race, failed to make it off the line, when the race began. All drivers successfully avoided his stricken Van Amersfoort car.

Daruvala, who finished the race second, revealed he positioned his car to avoid Hughes. “I knew Jake had a full rebuild of the car last night after his heavy impact in qualifying,” Daruvala explained. “So I just angled my car right off the line.

“My engineer warned me a bit just to watch out and unfortunate for him that he stalled but now we go through safely and I managed to gain one position.”

This is not the result we wanted today, but it is what it is after a bit of a tricky weekend so far. We could have done better but of course red flags are a part of Monaco. pic.twitter.com/5fJPlaTvBR

Arghhhh I was on for a good one at the end there… 😤 But that’s racing and all focus on tomorrow now. 🌧👀 pic.twitter.com/4PvFOuYYPV

Eeeek…
One of the roofs for the grandstands in Jakarta collapsed overnight due to heavy weather.
Thankfully no one hurt.
Still…😬😬😬 pic.twitter.com/jsIoKpqzoC

If you're paying that much money, you shouldn't have to watch adverts in the middle of sessions. Shameful

IndyCar says @ColtonHerta was re-evaluated this afternoon following his ugly crash/flip yesterday in practice and has been cleared to race in tomorrow's #Indy500.

Ferrari’s Benedetto Vigna: ‘We are in a period of technology transition’ (Financial Times)

"And I can tell you that, on Monday morning, when you’re in the office, if you win the race, you can smell and taste the sense of pride of all the people. It means a lot. Competition is part of the DNA of this company."

Monaco was F1’s jewel in the crown, but has its shine gone for good? (Guardian)

"The media who wax lyrical about what an extraordinary sensory experience it is are afforded a view normal fans will never have, even in the grandstands. Most fans are not even trackside; almost all of them watch on television, where the visceral sense of speed and noise is lost and the race often swiftly descends into a procession punctuated by discussion of whether tyre strategy will play a part."

"We're improving, which is key. I think in a way this is my best performance as a result and hopefully we can build on this."

"Race 1 and Race 2 at WTCR Race of Germany, scheduled as rounds three and four of the 2022 WTCR – FIA World Touring Car Cup, will not take place for safety reasons. The decision was taken following consultation with representatives of the FIA Sporting and Technical departments and official tyre supplier Goodyear Racing."

Monaco Paddock Tour with Leclerc and Sainz (Ferrari via YouTube)

"The Red Bull Energy Station is back in Monte-Carlo for 2022! And so is the iconic pool, so we numbered a whole load of rubber ducks and got Max Verstappen and Sergio Perez to take part in a series of questions and challenges."

With Formula 2 driver Amaury Cordeel escaping a ban by being reprimanded for a pit lane incident instead of hit with a penalty point, @red-andy cannot help but wonder if the driver being one penalty point away from a race ban led to him getting a simple telling off from the stewards:

I know some people complain about the penalty points system because it awards points for incidents that aren’t “dangerous” (which I think is a red herring, but I recognise the argument). However I think the Cordeel incident shows another potential problem – that the stewards are prone to withhold penalty points for fear of triggering a race ban.

Failing to drive safely in the pit lane is one of the most fundamentally dangerous things you can do in motorsport, and the narrowness of the Monaco pit lane makes it more important to do it properly, not less. So on the face of it I cannot see why this incident avoided penalty points, unless it was to spare Cordeel a race ban.

We saw similar with the mysterious U-turn on Hamilton’s penalty points for his illegal practice starts in Russia 2020, when the original penalty would have left him perilously close to a race ban.
@red-andy