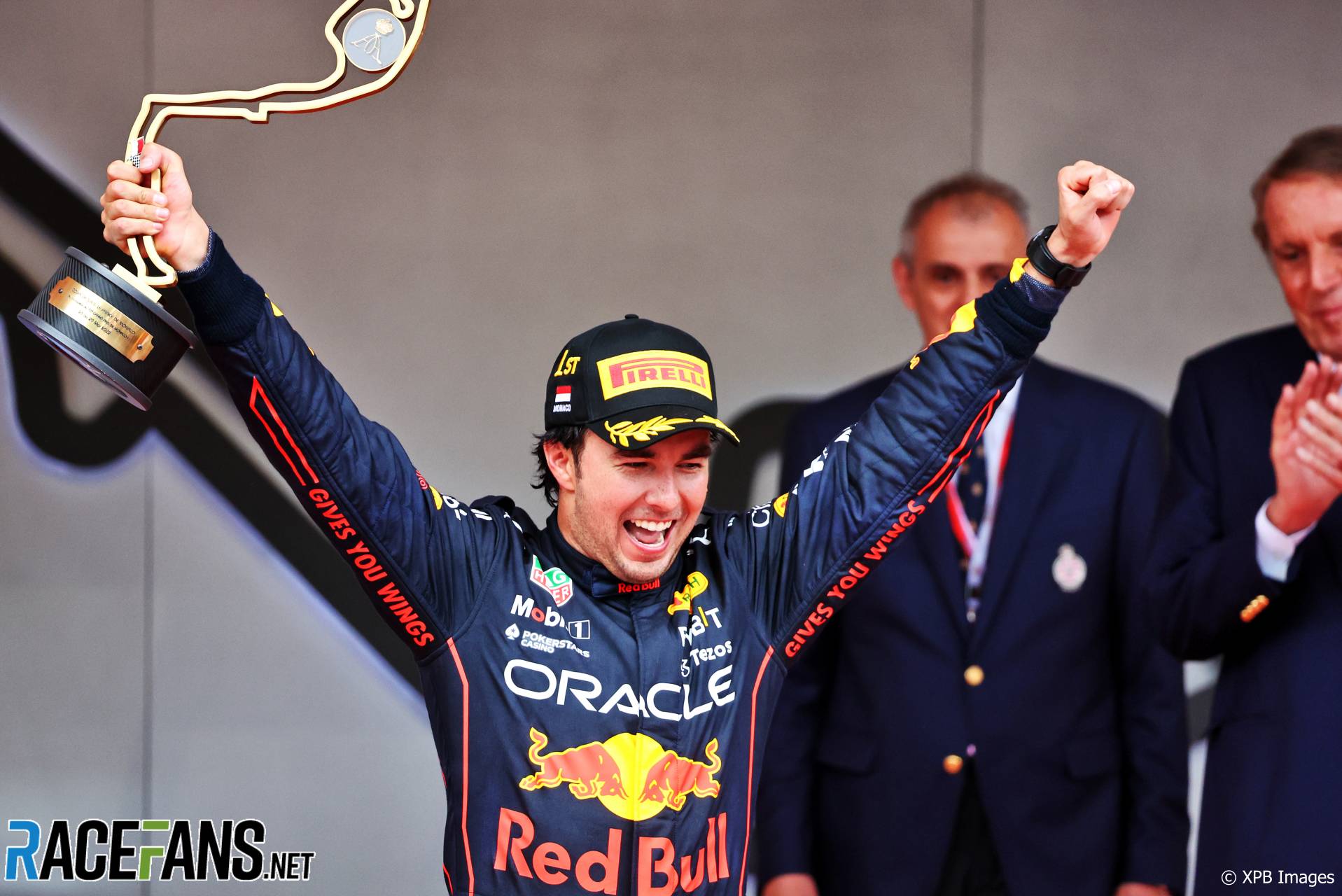 Sergio Perez held off Carlos Sainz Jnr with worn tyres to win a shortened and rain-affected Monaco Grand Prix where the top four were separated by three seconds.

Just 10 minutes before the formation lap prior to the start of the race, rain began falling over Monaco, throwing the already busy grid into chaos.

As teams struggled to decide whether to start the race on dry or wet tyres, race director Eduardo Freitas announced that the start of the race would be delayed. During the delay, the rainfall increased dramatically, soaking the circuit. After a 16 minute delay, the formation lap eventually began behind the Safety Car, with all 20 cars commanded by the race director to run on the extreme wet tyres.

The rain only became more intense during two formation laps behind the Safety Car and the start was aborted with all cars brought into the pit lane. After a delay of over an hour from the original scheduled start time.

The race officially began under Safety Car conditions before racing finally getting underway with a rolling start at the beginning of lap three, with Leclerc leading away from team mate Sainz and the Red Bulls of Perez and Verstappen.

Pierre Gasly took a gamble on intermediate tyres at the start of the race and set the fastest lap at the end of the fourth racing lap. That prompted a pair of drivers further down the order – Sebastian Vettel and Yuki Tsunoda – to also make the switch to the intermediates.

Despite Gasly catching and passing drivers on wet tyres, the leaders chose to stay out on their own wet tyres, with Leclerc pulling a five-second gap over his team mate Sainz with Perez two-and-a-half seconds from the second Ferrari. By lap 14, Perez reported that he felt intermediates were now the right option, before Sainz warned his team that he would likely want to switch straight onto slicks when the time came to take off his wet tyres.

Perez was the first of the front runners to pit for intermediates at the end of lap 16. Two laps later, Leclerc and Verstappen also pitted for intermediates, but Perez’s pace on the intermediates had allowed him to jump the pair to move second with Sainz yet to stop.

By now, some of those near the back of the field had gambled on a switch to hard slick tyres. Ferrari chose to react and called Sainz into the pits, but Leclerc also followed his team mate into the pits despite being told to stay out. Despite the confusion, Ferrari managed to switch tyres on both their drivers and send them both back out on slicks, with Sainz now ahead of Leclerc.

Red Bull immediately covered by bringing in Perez and Verstappen to also move to the hard tyres. Perez emerged in the lead of the race, just ahead of Sainz in second. Behind, Verstappen beat Leclerc to turn one to jump into third position ahead of the pole-winner, but Verstappen appeared to breach the yellow line at the end of the pit exit. The incident was noted by the stewards – initially referring to his team mate Perez instead – and not investigated.

With his tyres more up to temperature than leader Perez, Sainz caught close to the back of the Red Bull along the pit straight but almost spun his car on the still damp surface. But there was a much bigger moment for Mick Schumacher on lap 27, who lost control of his Haas exiting the first part of the Swimming Pool and spun into the TecPro barrier on the exit, destroying the car.

The Virtual Safety Car was deployed, then a full Safety Car as Schumacher’s car was cleared – the Haas driver able to climb out of his car unaided. After a couple of laps behind the Safety Car, the race was red flagged to allow for the barrier to be repaired, with Perez leading from Sainz, Verstappen and Leclerc with George Russell fifth in the Mercedes.

Following the delay to the start, it was now certain that the race would be time limited by the three hour overall time limit for the event. Eventually the race resumed under Safety Car on lap 31, with both Red Bulls opting for medium tyres and the Ferraris choosing to remain on hards. After two laps, racing recommenced with a rolling start at the start of lap 33, with no changes to the order.

Perez worked up to a steady pace, with first to fourth separated at intervals of around two seconds each. Fernando Alonso in seventh fell well off the pace of the leaders, dropping multiple seconds a lap to the leaders. That saw the field effectively split into two, with the first six cars pulling over 30 seconds ahead of Alonso and all the remaining runners behind him.

The race was now time limited and with just over ten minutes remaining, the front four had suddenly bunched up close together. Perez’s medium tyres were now showing visible signs of wear, allowing the hard-shod Ferrari of Sainz to close to under a second of the leader.

Despite Sainz applying pressure, Perez kept his cool and wound down the time to cross the line after time expired and win the race. Sainz took seconds, just a second behind the Red Bull, with Verstappen crossing the line in third and Leclerc within three seconds of the winner in fourth.

Russell only just held onto fifth place ahead of Lando Norris, who took advantage of the large gap to Alonso behind to pit for a fresh set of mediums and take the fastest lap of the race. Alonso eventually claimed seventh, over half a minute behind Norris, with Lewis Hamilton eighth.

Esteban Ocon finished ninth on the track, but a five second time penalty for contact with Hamilton earlier in the race saw him drop out of the points in 12th, with Vettel claiming the final point in tenth.