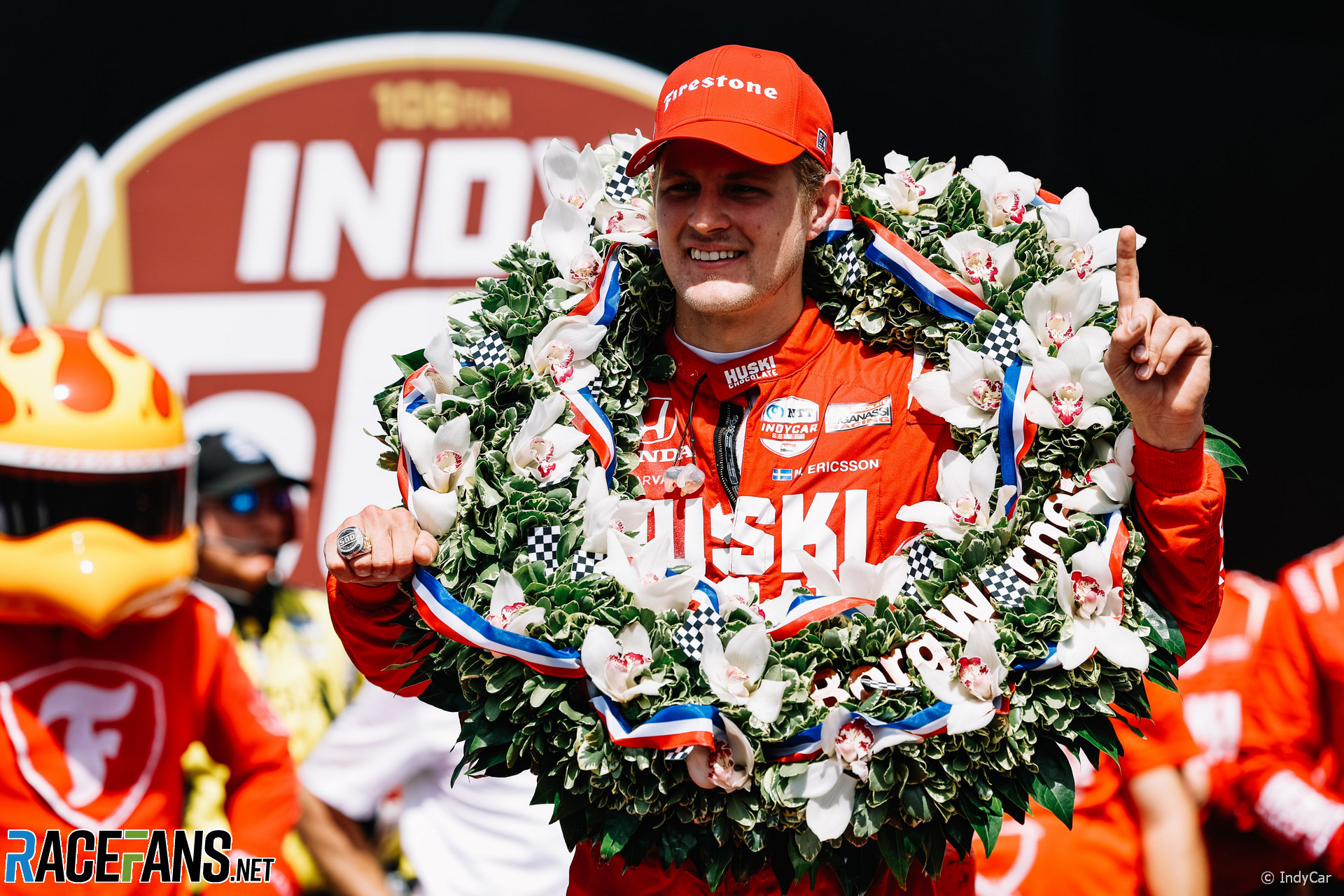 Marcus Ericsson survived a tense two-lap shootout with Pato O’Ward to take the biggest win of his racing career in the Indianapolis 500.

Ericsson burst into contention in the final 25 laps of 200 around the Indianapolis Motor Speedway.

His Ganassi team mate Scott Dixon, who had dominated the first three quarters of the race, picked up a drive-through penalty for speeding into the pit lane on his final pit stop. It denied Dixon a second win for another year, despite sitting on pole for the second year in a row.

With 20 laps to go, Ericsson was running behind the McLaren SP duo of Felix Rosenqvist and Pato O’Ward. He overtook O’Ward on lap 181, then grabbed the virtual lead of the race on lap 183 when he went past his compatriot Rosenqvist.

And once all cars made their final pit stops, Ericsson had a three-second lead to O’Ward, thanks to perfectly-timed overtakes on lapped backmarkers.

But all of that appeared to change with five laps remaining when another of his team mates, super rookie Jimmie Johnson, crashed out at turn two. That caused the fifth full-course caution of the race and, eventually, a red flag to set up a two-lap shoot-out to decide the biggest race of the IndyCar season.

Ericsson drove defensively for the final five miles, doing all that he could to keep O’Ward behind him. O’Ward had a fantastic run out of turn four as the leaders took the white flag, and sized up a move around Ericsson – only for the Swede to slam the door on the Mexican driver. A final-lap crash for Sage Karam outside the top ten brought the race under yellow for the final time, securing the victory for Ericsson.

Ericsson may have been the most overlooked of Ganassi’s five drivers that had a shot of winning this race. But the former protege of 1999 winner Kenny Brack will have his name and likeness etched on the fabled Borg-Warner Trophy as the winner of the Indy 500 – the defining moment of a career that has twisted through Europe and Japan, four seasons in the GP2 series, then five mostly fruitless years in Formula 1 before making the change to IndyCar and having his breakthrough season in 2021.

O’Ward, who finished sixth in the 2020 race and fourth in 2021, improved two more positions to finish second in the first race since confirming a contract extension with McLaren SP.

Tony Kanaan, the 37-year-old one-time winner driving what may be his final Indy 500, surged past Rosenqvist in the final 20 laps and eventually finished third. It was his best finish at the 500 since winning it in 2013. Rosenqvist came fourth, his best result since joining McLaren SP at the start of the 2021 season – and a much-needed result for him as he nears the end of his contract.

2016 winner aAlexander Rossi rallied from 20th to finish fifth thanks in some part to some brave moves on the restart. He led home long-time friend and Indiana native Conor Daly, whose sixth-place finish is his best-ever Indy result. Daly jumped up the order thanks to a perfectly-timed pit stop that came just before the second caution for Callum Ilott’s crash at turn two.

Four-time and defending winner Helio Castroneves picked his way from 27th to finish in seventh, ahead of team mate Simon Pagenaud in eighth.

Alex Palou finished ninth, but could have been a contender for victory if he’d not been caught out by the second caution for Ilott’s accident. Palou was trading the lead with his Ganassi team mate Dixon in the first quarter of the race, but he was forced to take emergency refuelling service in a closed pit lane – and had to restart at the tail end of the field. Santino Ferrucci, driving for part-time independents Dreyer & Reinbold Racing, finished 10th.

Dixon dropped to 21st in the end, his 95 laps in the lead serving as little consolation for yet another near miss with a legacy-defining second win at Indy.

In total there were six cautions for single-car accidents, and we can confirm that all drivers were not seriously injured. The first came on lap 39 when front-row starter Rinus VeeKay crashed at turn two, the same place where Ilott crashed out on lap 69, bringing out the second caution.

Romain Grosjean’s first appearance in the race ended with a crash on lap 106, also at turn two. And on lap 151, Scott McLaughlin’s day ended with a scary crash at turns three and four, where he nearly collected Ed Carpenter after the first impact.

It was also a brutal day for Colton Herta, who retired after 129 laps due to a mechanical failure after rapidly dropping off the pace. He was driving a backup car after a heavy crash during Friday’s Carb Day practice sessions.

Ericsson’s victory is the sixth for car owner Chip Ganassi, succeeding Emerson Fittipaldi (1989 in a joint entry with Pat Patrick), Juan Pablo Montoya (2000), the aforementioned Dixon in 2008, and Dario Franchitti in 2010 and 2012.