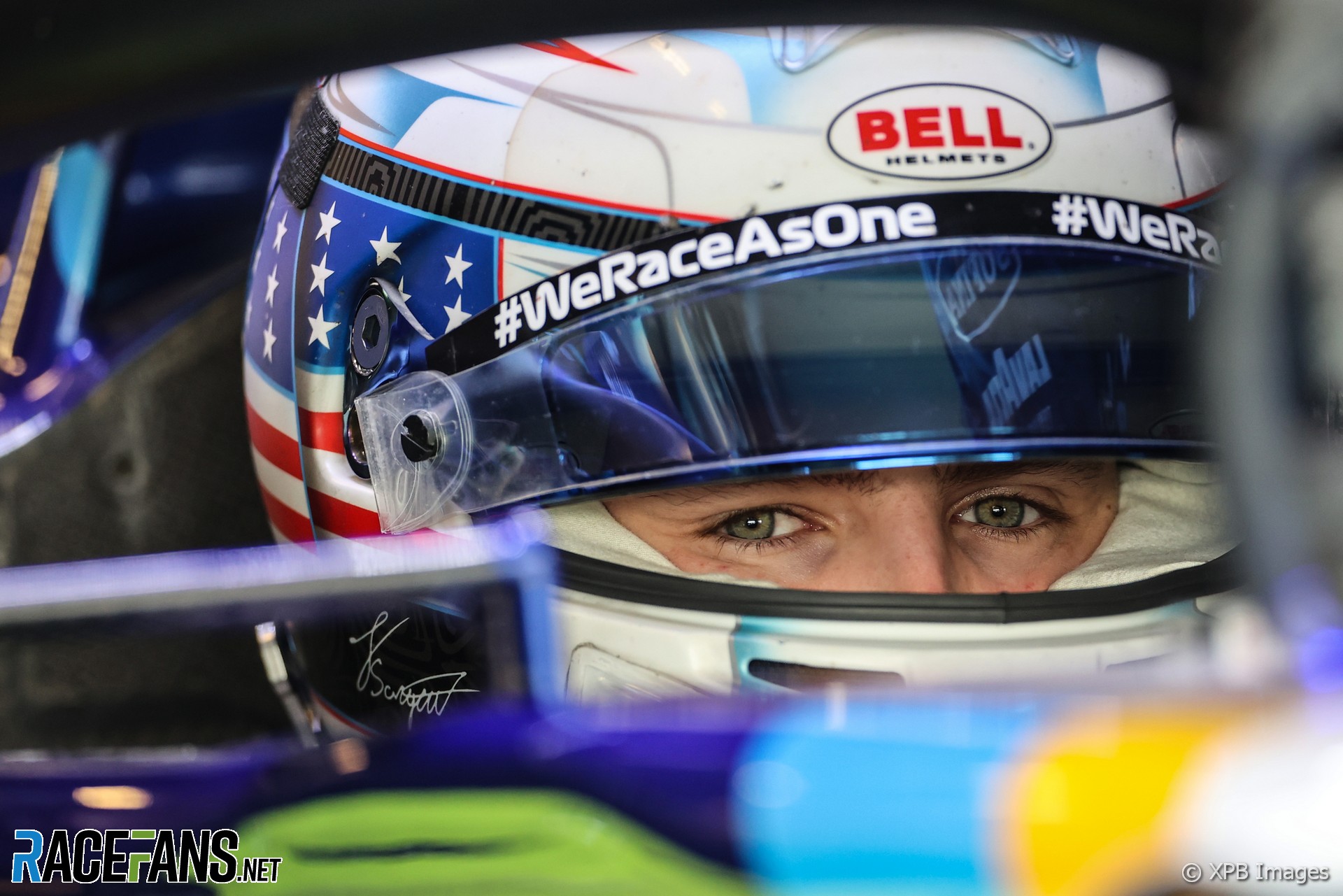 With so much talk about the potential arrival of Andretti into Formula 1 and a possible move for Colton Herta, it’s easy to forget that there is a Williams-backed American driver racing just one tier below Formula 1 in 2022.

Logan Sargeant is driving his first season in Formula 2 with Carlin in 2022 – his first year while a member of the Williams’ junior driver programme. In a small session with a handful of media, RaceFans caught up with the 21-year-old in Miami to found out how he’s finding life in Formula 2.

How does it feel being the current closest American driver to reaching Formula 1?

Sargeant: I don’t mind if I’m the first or second or whatever – as long as I make it there, that’s all that matters. Obviously being in Formula 2 now, the path is there, it just comes down to performance. I feel like Carlin’s doing a really good job to give me a fast car at the moment so we can take advantage of that.

What’s been the biggest challenge of transitioning from F3 to F2 this season?

Sargeant: The biggest challenge switching between the two series is, one, wrapping your head around the weight of the car – it requires a slightly different driving style. And then the extremely chaotic races. As long as you have good pace, keep your nose clean, a good pit stop, you should be right there to fight at the end.

How surreal is it going from having your F2 future in doubt to being in this position in less than a year?

Sargeant: It is pretty crazy to even think about from my side. At the end of 2020 it looked very, very down. We didn’t really have many options. The budget wasn’t there to go to Formula 2 and Charouz came with a really good offer to race in F3 again.

But even still, I nearly didn’t accept that, I nearly moved on to a different category. But looking back at it, I’m very glad I took that and set me up for where we’re at now.

It’s said that any American wanting to reach F1 has to fully commit to coming to Europe and live that life – do you agree with that?

Sargeant: I do. I mean, I think coming through Formula 3, Formula 2, we’re using Pirelli tyres, we’re already getting well acquainted with all the circuits in F1, the way the tyres react, we’re just sort of being built up to the pinnacle of motorsport. So I think I’ve made the adjustment and I feel like that was the right decision and I feel like I put myself in the best position possible to get to Formula 1.

How did you end up following the path to Formula 1 and not, say, NASCAR?

Sargeant: I got asked that the other day actually. I just felt like Formula 1 is obviously always in your mind but you just take each step at a time. And I feel like it just sort of led to this point. I don’t think there’s a real answer to it.

As a Florida native, where did you first start driving?

Sargeant: My first racing experience was between Homestead, the karting track down there and also PBIR [Palm Beach International Raceway] which no longer exists, which is kind of sad to see.

At what point did you think racing would become a career for you?

Sargeant: I can only speak from how I remember it, but the way I remember we were just having fun and we just wanted to keep racing. I don’t think we were really too worried about the future when we were at that age.

It just keeps stacking up and as you keep going into other series and the competition grows, it just all sort of falls in line.

How is your campaign in F2 shaping up after three rounds?

Sargeant: I think we’re right on the on the cusp of a big result. I feel like Carlin’s been giving us a really quick car. So we need to take advantage of that. When you cut out these minor mistakes that we’ve had in the first three rounds and one feature race win, you’re back in the hunt.

Formula 2 doesn’t have a US flyaway round this year but would you want to see one in the future?

Sargeant: Here or Austin, that’d be awesome. I’d love to see an American race on the F2 calendar.

Have you ever felt it’s harder for you, coming into FIA series from the American junior ladder?

Sargeant: I feel like all the teams I’ve been with throughout my junior career have always had my back and they’ve always believed in me. They’ve always given everything for me to have a good chance of winning. I feel like I’ve had it pretty well.

Moving to Europe is a big commitment, for a young driver. How did you find it?

Sargeant: That’s by far the hardest part, leaving everything behind. Now I don’t live with my family and all my friends that I grew up with. That’s definitely the most challenging part.

What made you choose to move, rather than try to get in an Indy Lights and IndyCar programme?

What’s life like in the UK, compared to Florida?

Sargeant: I’m pretty much in the heart of London. On a day to day basis I normally deal with the rain and cold. I just try and stay as active as I can in the gym, I try to get to both Carlin and Williams to be on the sim as much as possible, just to keep my mind going. I try to try to fill the time so I don’t get bored. That’s the biggest bit.

I actually just got my first car over there recently, which has made things a lot better. Easier, because now I can just drive myself to the gym, get myself to Williams, Carlin. It’s definitely – you feel like you have a bit of freedom.

I miss the water from Florida and the beaches and the nice weather, but it definitely has its perks. I feel like there’s so many amazing restaurants, the city is obviously beautiful.

5 comments on ““We’re right on the on the cusp of a big result”: Q&A with Williams junior Logan Sargeant”