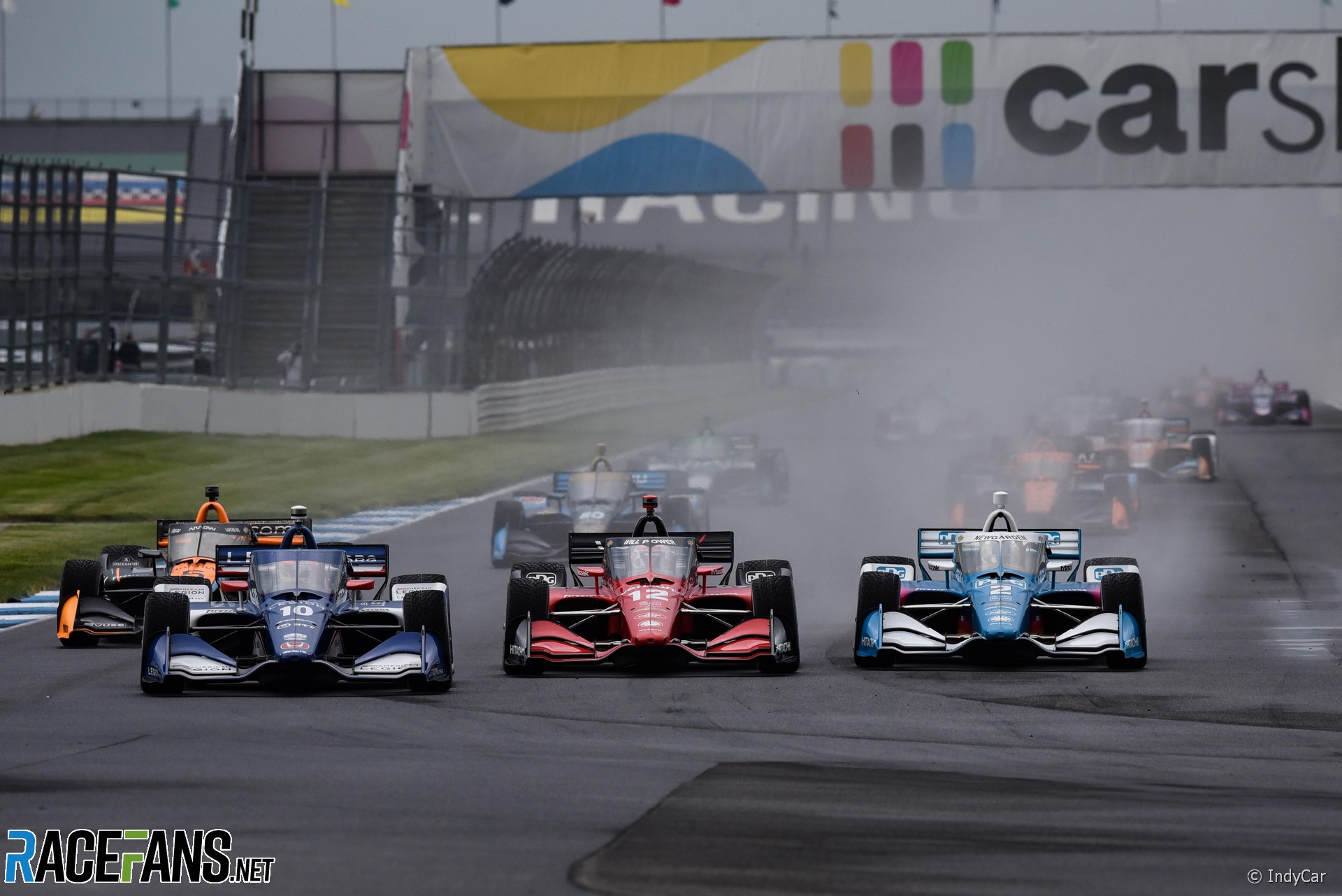 IndyCar had its first wet race in nearly three years at the Indianapolis Grand Prix circuit on Saturday. Crucially, it was the first wet race since the introduction of the Aeroscreen safety structure for the 2020 season.

Visibility in the second half of the race became an issue for a number of drivers as heavy rain fell over Indianapolis Motor Speedway. Moments after Colton Herta won the race under yellow flags, Christian Lundgaard ran into the back of Callum Ilott out of the final corner – with Lundgaard admitting that he could not see Ilott’s car because of the spray in front of him.

After the race, comments by many drivers about the performance of the device brought the Aeroscreen’s wet-weather visibility under scrutiny. Former IndyCar driver and four-time ChampCar champion Sebastien Bourdais shared his views on Twitter after the race, explaining his view that the actual screen should be removed for road and street circuits.

“Oh boy. Is it when I come out and write, I told you so?,” Bourdais posted. “Don’t get me wrong. Never argued the need for the aero screen at speedways and superspeedways. But initially, talks were supposed to be open to use the halo part only for road and street because of heat and rain visibility issues. Dismissed in an instant by the man.”

Conor Daly explained a troubling phenomena he encountered on his way to a fifth-place finish: “I’ve never seen anything like that before,” he said. “It was like the water just stayed in the centre of the screen. And I don’t know why, but even as you went faster – which you would hope it would clear – it didn’t.

“Obviously, this is very much a scientific test run. Obviously, we have a lot of data to go through with the series, and I’m sure [IndyCar president] Jay Frye will look at it as well. And he hates when I talk about the Aeroscreen, but I’m just describing what I saw. That’s all.

“I used to race in the rain all the time, so we had a visor that you can work with. But this is a new era, so obviously there are things that we can figure out.

“It was definitely hard to race like that, because you don’t want to, obviously, end up on the wrong side. Even under yellow – I couldn’t see the cars in front of me under yellow. I had to be guided into pit lane, and that’s concerning. Hopefully we can figure that out, but hopefully we also have very shiny weather for the rest of the year.”

Simon Pagenaud, who finished second, suggested the addition of a windshield wiper could help with visibility problems in the future. “I mean, if we had a wiper, it would probably help,” Pagenaud said, “but that was the first real race with the Aeroscreen, so you got to give credit to IndyCar. The safety is amazing, but in these conditions you would need a wiper like they do in the sports cars.

“It’s possible, and it would probably help in these conditions. Obviously I’m not an engineer. I don’t know what we should do. It’s certainly the first real test for the Aeroscreen.”

Pagenaud says he maintains a positive opinion over the Aeroscreen’s protective qualities, citing an incident at Texas where Ilott’s car was hit by a suspension wishbone. “The windscreen saved him,” Pagenaud said. “That’s good, and we want to go forward from here. So we’ll find solutions and improve it and make sure that when we have rain races, then we don’t have these issues.

“It’s only been positive. I’m not being negative at all. I’m being quite positive about it and what we could do forward to make it even better.”

Third-place finisher Will Power said he did not experience the same degree of difficulty with visibility in full wet conditions. “I didn’t have much problem with the rain,” Power said.

“The worst part for me was when it was half wet. We’re on dries, and you have kind of that gritty just dirt on top of water. That was when I struggled to see a little bit, but in the full wet, I mean, the biggest problem for me was the spray from the cars. There’s really nothing can you do about that with open-wheel cars.”

The inherent nature of the spray being generated from high-level formula cars was also something that fourth-place finisher Marcus Ericsson pointed out during a short Twitter thread explaining his views on the Aeroscreen in the wet.

“My view from my car: It worked well. The visibility issues was coming from all the standing water and spray, mainly on the straights. You could hardly see because of it. [I’ve] done many races in the past in similar conditions with the same problems. It didn’t fog up. And it cleared the water well. Racing big Formula cars in heavy rain will always be a challenge because of all the water they kick up. But I am happy IndyCar let us race in these conditions.”

Even Herta, the winner, had some visibility issues – but suggested that the problem would be the same with, or without, the Aeroscreen. “I think we would have been in the same situation without the Aeroscreen there at the end, though, because it was really, really wet,” Herta remarked.

“The only downside I think there was, was not having a tear-off when it dried up. Because you get all the mud and raindrops on there. But once I had a tear-off, it was fine.”

Herta echoed Ericsson’s comments that the Aeroscreen fogging up did not become a problem, as was feared initially by some drivers.

“I think a lot of people were worried about the fogging because it can still be quite muggy when it’s raining here, but it wasn’t a problem for me. I was happy with it.”