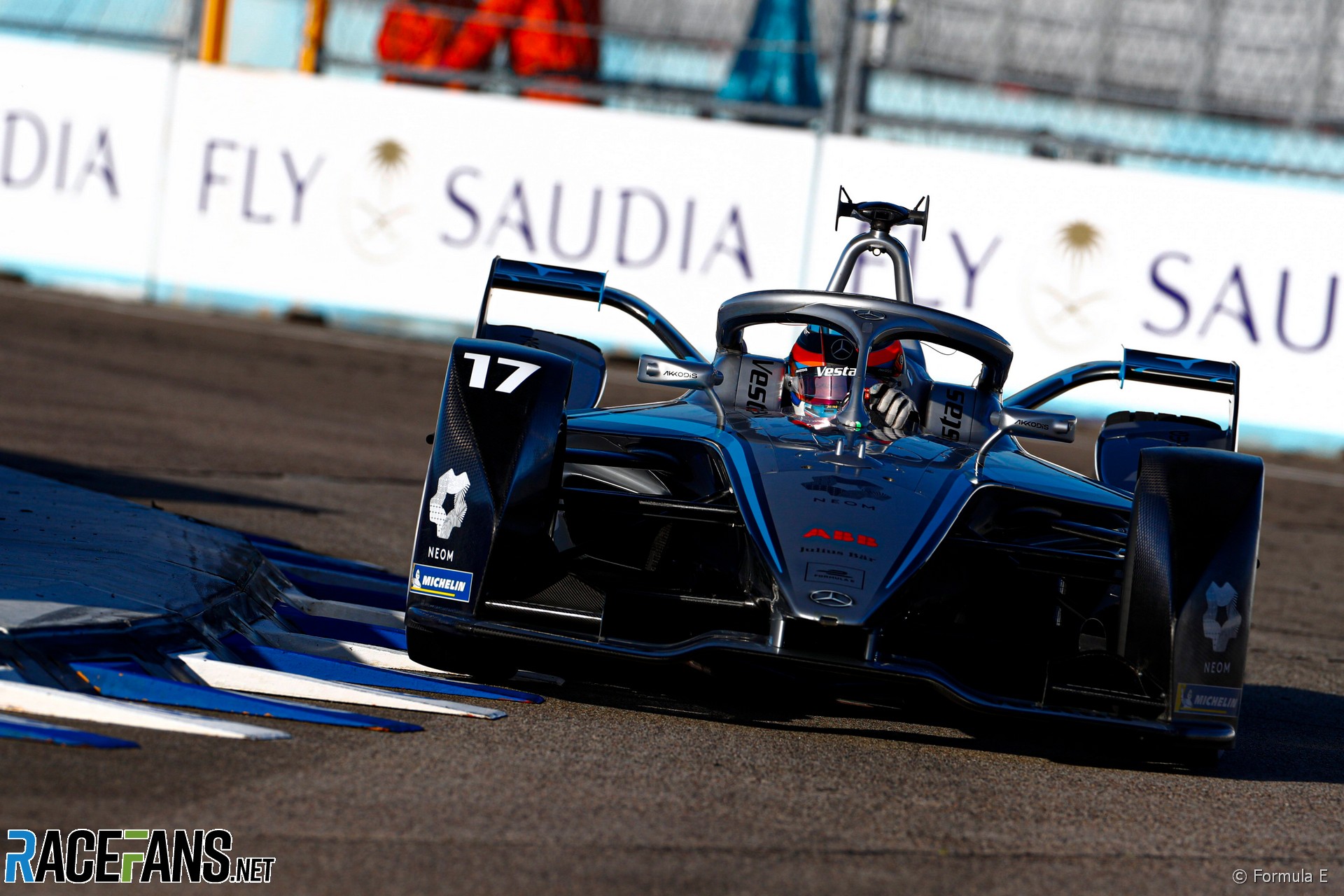 The Mercedes driver passed Mortara into the first corner at the start and came out of the Attack Mode phase of the race with the lead, comfortably keeping ahead of the Venturi behind to take his second win of the season.

Stoffel Vandoorne took his second podium in two days in third after a late pass on Lucas di Grassi in the second Venturi.

At the start, polesitter Edoardo Mortara hugged the inside wall approaching turn one, but left just enough space for Nyck De Vries to poke his Mercedes alongside the Venturi from third place and muscle Mortara out of the lead at the first corner. De Vries therefore took the early lead, with Mortara in second ahead of Robin Frijns, Andre Lotterer and the second Venturi of Lucas di Grassi in fifth place.

The order at the front remained static over the early phase of the race, with De Vries holding the lead but the pack behind not allowing him to escape their reach. De Vries was warned by his team he was “low on change” and encouraged to carry out more energy saving. However, he responded by taking his one of only Attack Mode first of all the frontrunners, dropping down to third place behind Mortara and Frijns.

The next lap, Frijns attempted to take Attack Mode from second place, but was not granted the additional power boost despite appearing to successfully navigating through the activation zone, costing his two places for no benefit. De Vries took advantage of the free position to catch to the back of Mortara and use his extra speed to overtake the Venturi and retake the lead.

Antonio Felix da Costa used his Attack Mode to pass Di Grassi for third, then quickly drove around Mortara to move into second place. Mortara took his Attack Mode last of all the leading drivers, falling to fifth place. However, as the four cars ahead of him all had Attack Mode expire, the Venturi in fifth still had over five minutes of additional power remaining.

Mortara passed Lotterer for fourth, before moving up to third by passing Vandoorne’s Mercedes on the next lap. Da Costa was Mortara’s next victim and he was powerless to prevent the Venturi from taking second place. With just under two minutes of Attack Mode remaining, Mortara set about trying to close the two second gap to leader De Vries out front, but was unable to close up to the Mercedes by the time his Attack Mode expired.

Behind, Di Grassi had promoted himself up to third at the expense of Da Costa, who had also been passed by Frijns to lose fourth place. Da Costa had been awarded Fan Boost, however, and he used it to good effect to slipstream by Frijns and retake fourth position, with Vandoorne taking advantage to demote Frijns down one place further to take fifth.

Entering the final ten minutes, the top five began to spread out slightly. Mortara was struggling to close the gap to De Vries out front, while Di Grassi in third was neither catching his team in in second or under threat from Vandoorne behind. That was until under two minutes of race time were remaining, when Vandoorne caught up to the rear of Di Grassi along the pit straight, passing the Venturi on the inside into turn one to take the final podium position.

After time expired, De Vries crossed the line despite not receiving the chequered flag from the gantry to take his second victory of the season and first since the opening weekend in Diriyah. Mortara claimed second to cap off a strong weekend, with Vandoorne also taking third in consecutive race weekends.

Di Grassi finished fourth, but there was last lap drama behind with Frijns and Da Costa battling over fifth. Frijns finished ahead on the track after the pair almost collided along the back straight while fighting over the position.

The series will head to Jakarta in Indonesia for the next round in the championship on June 4th.