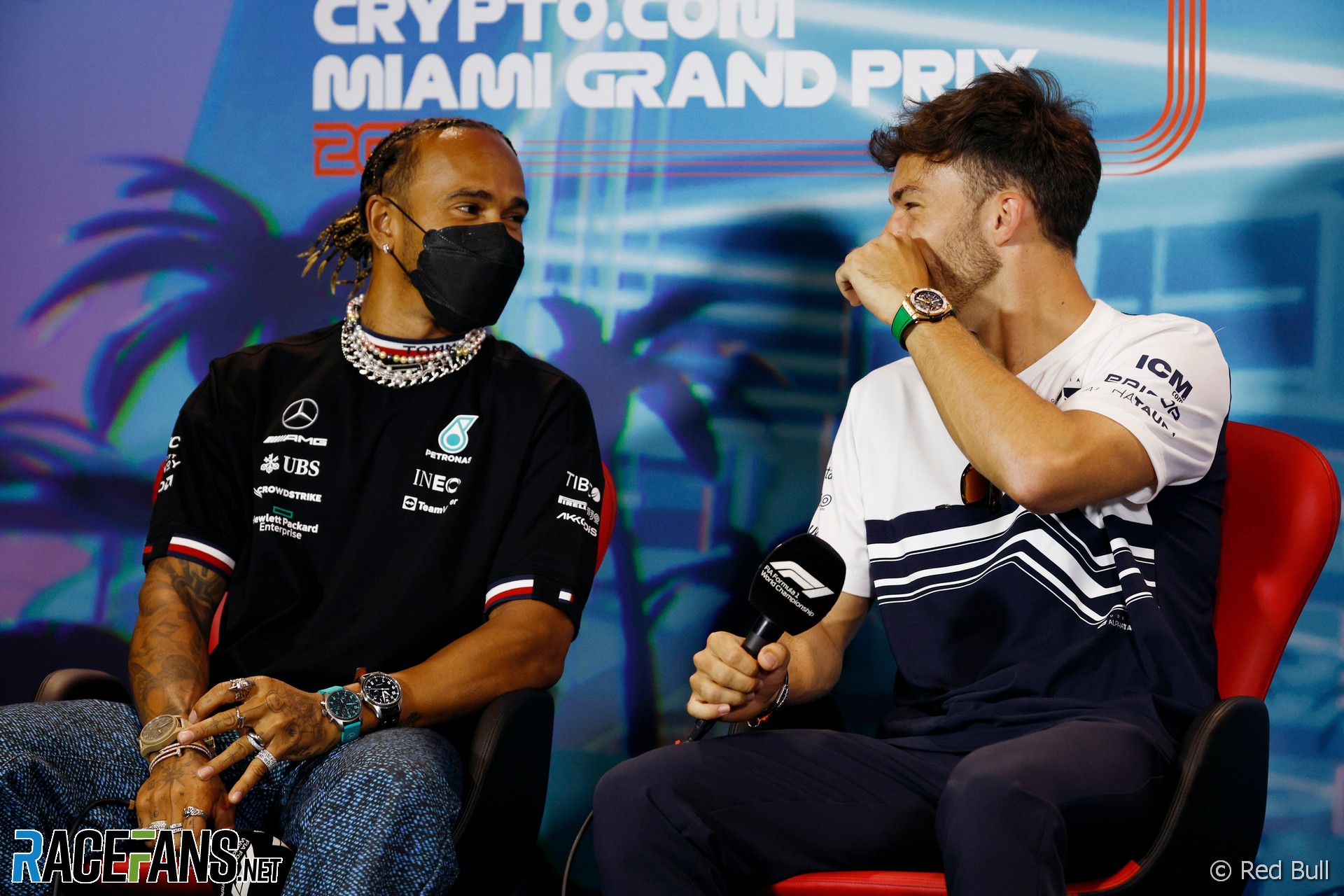 FIA race director Niels Wittich’s reminder to drivers of the safety rules regarding jewellery and underwear put Formula 1’s governing body on a collision course with Lewis Hamilton last weekend. But he wasn’t the only driver who spoke out against the clampdown.

Drivers were put on notice about this earlier in the year. In Miami the FIA took it a step further, reminding them jewellery may increase the risk of burns in the event of a fire, and may hinder medical interventions as well as any required treatment after an accident.

It has been widely referred to as a ‘jewellery ban’, but the rule isn’t new to Formula 1, having been introduced in 2005. However the FIA has stepped up its enforcement, warning to those competing the “wearing of jewellery in the form of body piercings or metal neck chains is prohibited during the competition and may therefore be checked before the start.”

The push from the governing body was met with resistance, as Mercedes’ Lewis Hamilton, who has many piercings, felt personally aggrieved by the rule. Sebastian Vettel even went so far as to claim the push from the FIA was “targeted to Lewis”.

Hamilton’s accessories have never previously triggered action by the FIA, or been reported to the stewards. He has pointed out some of his piercings are fixed in place, and reiterated his refusal to remove them last weekend.

“I feel like it’s almost like a step backwards if you think of the steps we’re taking as a sport, and the more important issues and causes that we need to be focused on and really pushing,” said Hamilton. “I think we made such great strides as a sport. Look, we’re here in Miami, this is such a small thing.”

He challenged the inconsistent application of the rule, which was put in place two years before his grand prix debut. “I’ve been in the sport 16 years, I’ve been wearing jewellery for 16 years, in the car I only ever have my earrings on, and my nose ring, which I can’t even remove.”

“It seems unnecessary for us to get into this spat,” he added, saying he’ll “try to communicate” about the matter with FIA president Mohammed Ben Sulayem. “I’m here to be an ally of the sport, of Mohammed and Formula 1.

“And as I said, I think we’ve got bigger fish to fry, bigger things to do, more impact to have. So, I think that’s really where the focus should be.”

His boss Toto Wolff urged “a dialogue between Lewis and Mohammed” to strike a balance between safety and freedom of expression.

“It is clear that regulations are here to protect the drivers,” said Wolff. “On the other side, we need to keep the possibility on diversity and the means of expression and expressing yourself. And we know that this is important for Lewis.”

Though Hamilton is free to wear whatever he likes off the track, the FIA are well in their right to stringently enforce the ban on jewellery. The safety of the drivers is paramount.

There are seemingly grey areas in the rule. It does not specifically explain what to do with certain pieces of symbolic jewellery like wedding rings.

Haas driver Kevin Magnussen had no interest in picking up a fine, and ensured he was fully compliant with the rules in Miami. But he feels there should be certain exemptions.

“With something like that, like your wedding ring, let us take that responsibility. There must be somehow to remove liability.”

After decades of safety improvements reduced the frequency of fires, the shocking 2020 crash suffered by Magnussen’s then-team mate Roman Grosjean refocused minds on the dangers. Grosjean’s hands were severely burnt after an enormous crash when his car exploded in a fireball.

However the former Haas driver stated even now, with the scars visible on his hands, he would never remove his wedding ring before climbing into the cockpit. “I’ve been wearing my wedding ring all of my career,” he told Sky.

“Where my ring was I was protected, so I was protected by my wife, saved by my kids. I understand some of it, but I wouldn’t like to race without my wedding ring. That is big for me.”

Hamilton, who was given a temporary exemption to continue wearing his fixed items of jewellery, seized on that distinction. “I got an exemption here, I’ll get an exemption the rest of the year,” he insisted after the race. “Wedding rings are allowed.”

But he wasn’t the only driver who felt aggrieved by the clampdown. Pierre Gasly, who wears a cross around his neck for religious reasons and prays before he climbs into the car, said he did “understand” the FIA’s position but like Hamilton believes there “are bigger things to focus on.”

He said: “I appreciate FIA are looking after our safety. That’s also their priority and our priority. My personal case, I have also religious items that I wear with me, when I’m racing, which are important to me, which I don’t feel comfortable not having with me driving the car, and I do feel it’s a little bit personal. We should have the freedom to do what feels right for us.

“At the end of the day, we have the responsibility to go out there put our life at risk. And I do feel it should be a personal choice, but I respect the FIA and their will to always improve the safety. But I’ll appreciate a talk with them, to see if we can find a better solution than such a strict decision as they made. So we’ll see what we can do.”

The FIA undoubtedly has the drivers’ best interests at heart in this matter. And perhaps the drivers have become a little too accustomed to having things done their own way. But the way the FIA has gone about it leaves something to be desired.

What will happen to Hamilton if he refuses to back down and fails to gain a further exemption? There has been no official document explaining what happens if rules are broken by drivers but, as Magnussen indicated, they expect hefty fines for non-compliance.

However at the Monaco EPrix, Porsche’s Pascal Wehrlein and Jaguar’s Mitch Evans were each handed a penalty point on their superlicences after they were found to be wearing necklaces during the qualifying session. As in F1, if drivers accumulate enough superlicence points they automatically incur a race ban.

On Friday, Hamilton made it clear he is prepared for that possibility. “If they stop me, then so be it,” he said. “We’ve got a spare driver.” The battle lines are therefore drawn: To enforce its ‘bling ban’, the FIA may have to bench F1’s most famous and successful driver.