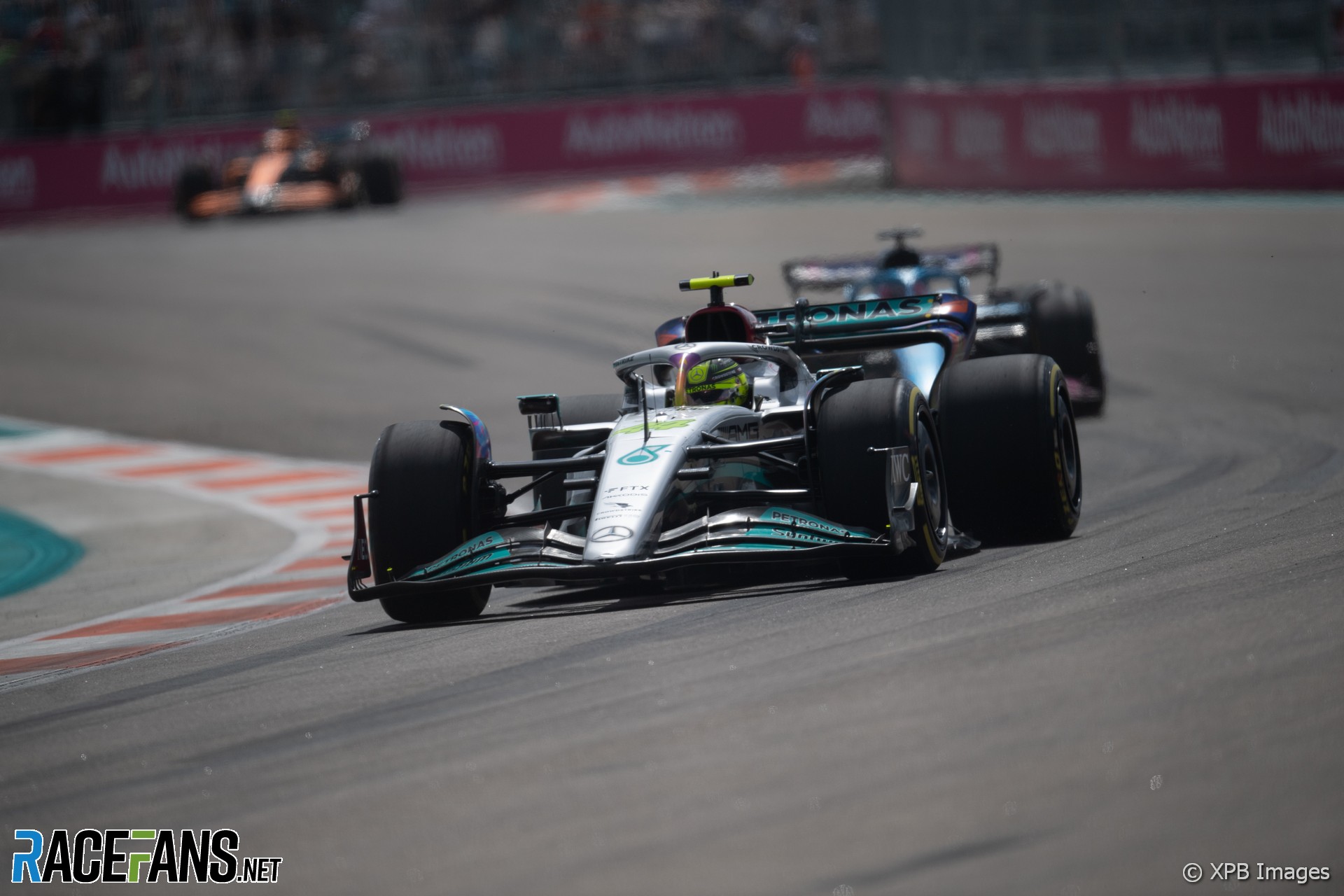 Lewis Hamilton says he hasn’t seen any improvement from his Mercedes over the first five races of the 2022 F1 season.

But team principal Toto Wolff believes they have now glimpsed a “sweet spot” in the car’s performance which they hope to exploit in coming races.

Hamilton finished sixth in Miami behind team mate George Russell. He lost 21 seconds to the leaders over the 13-lap green-flag run to the finish following a late Safety Car restart.

Speaking after the race, Hamilton said he’d seen no signs of a step forward by the team.

“Unfortunately not,” said Hamilton. “We’re the same speed as we were in the first race. So we’ve just got to keep trying.

“We haven’t improved, unfortunately, in these five races. I’m hopeful that at some stage we will. But we’ve just got to keep trying, keep working hard.”

The team has been plagued by problems with porpoising since the season began. Hamilton said that felt better during Sunday’s race, but pointed out it is highly sensitive to variations in track layout, surface and conditions.

“It wasn’t as bad today,” he said. “From race to race, track to track, surface to surface, how high we put the car – we can put the car higher and reduce it – so today wasn’t actually really bad, just not fast.”

Wolff said the team’s experience in Miami has “definitely given us answers” about the car.

“On the positive side, the car is quick when it’s in the sweet spot,” he said. “But understanding where the sweet spot is is something that we are going to become a step closer to after analysing all the data this weekend.”

He is unsure how soon that progress may translate into gains on-track. “Whether it’s Barcelona or not, I don’t know.”

Mercedes were “flying in the fog a little bit” with their car at the beginning of the season, he added. “It’s clear that there’s potential in the car and she’s fast but we just don’t understand how to unlock the potential.

“It’s probably a car that is super-difficult to drive and on the edge, dipping in and out of the performance window. More out than in. And dissecting the data with a scalpel is just a painful process because it takes very long.”

The team’s attempts to make progress have been complicated by differences between what their drivers report about the car and what their data shows.

“Certainly they have their hands full with a car that is just not at all comfortable to drive, or nice to drive or predictable to drive,” said Wolff. “But the data doesn’t show these big swings.

“We haven’t had this situation before in any of the years that it just didn’t correlate what we see on the screens with what the driver feels. And that’s making it even more difficult.”