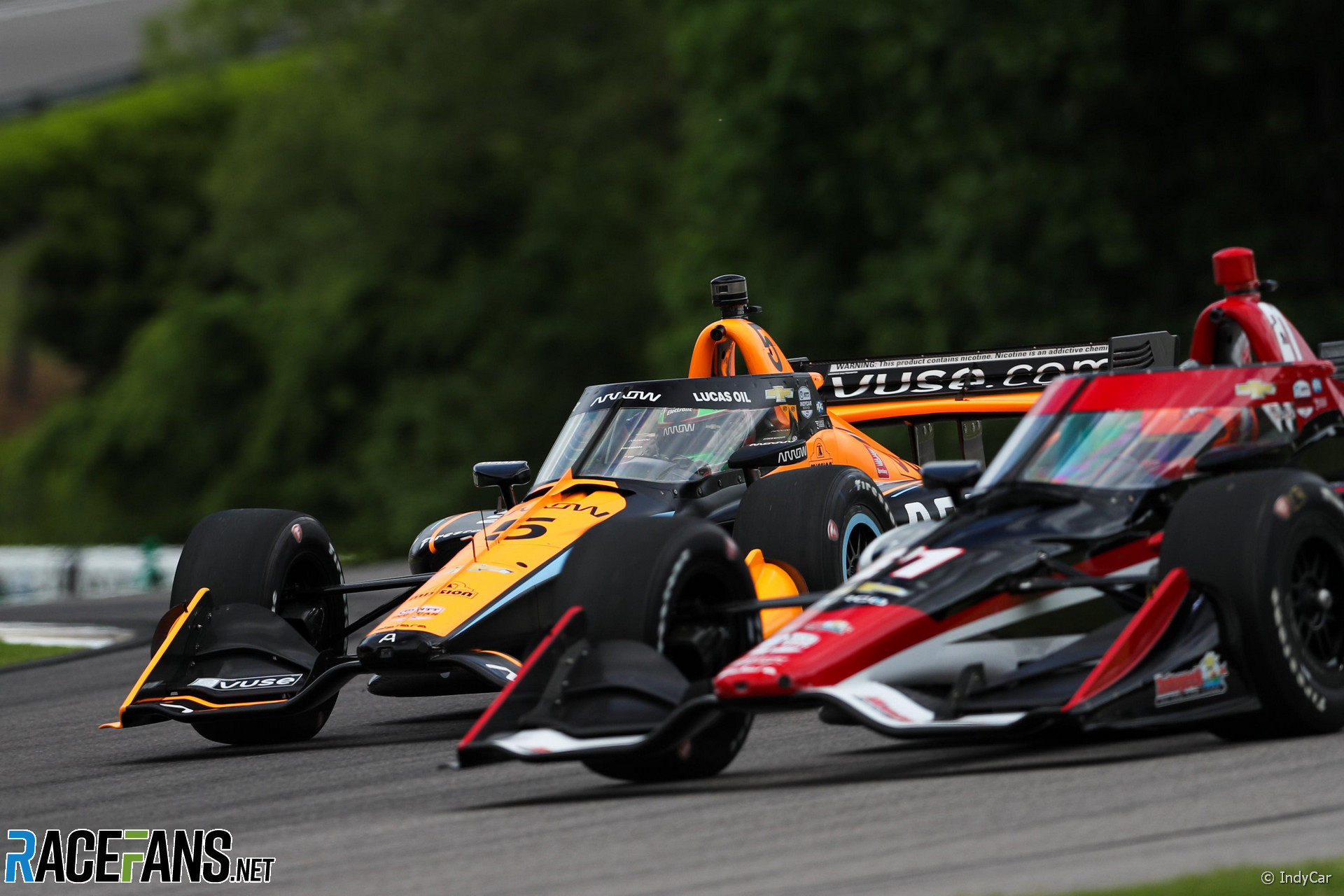 Pato O’Ward won pole position for last year’s IndyCar Grand Prix of Alabama at Barber Motorsports Park, but gradually faded to third towards the end of the race as he struggled to manage his tyres.

One year later, the McLaren SP driver turned the tables on pole winner Rinus VeeKay, and won Sunday’s fourth round of the 2022 IndyCar Series ahead of defending champion Álex Palou.

The pivotal moment of the race came at the end of lap 61, when VeeKay and O’Ward pitted together from first and second position. VeeKay had been the dominant driver of the day, leading 57 laps. Exiting their stalls, VeeKay was still ahead of O’Ward as they rejoined the track.

But with a brilliant lunge around the outside of the turn five hairpin, O’Ward snatched the effective lead of the race away from the Carpenter driver. Once the rest of the field made their final stops, O’Ward was in the lead by lap 64.

Palou made his final stop on lap 63 and was able to ‘overcut’ VeeKay into second place. While VeeKay eventually faded from reach of the top spot, Palou was able to stay within two seconds of the leader on a used set of the harder, primary tyres.

But unlike last year, when Palou overhauled O’Ward for the lead en route to the win, this time O’Ward had the measure of his rival and claimed victory by just under a second. It was an important win for the McLaren SP driver, turning around a poor start to the season which began with finishes of 12th and 15th, before improving to fifth at Long Beach. His first win of the season is the third of his career.

Second place for Palou but last year’s winner in the lead of the championship lead, heading into the Month of May at Indianapolis Motor Speedway, with 144 points. VeeKay will be disappointed after finishing third, but with his first podium since the Detroit GP race two, he has now fully bounced back from the training injury he suffered last June.

Will Power was the hard charger of the race, rising from 19th to finish fourth. He was on the move in the final stint, using a fresh set of alternate compound tyres to pass Scott Dixon and Scott McLaughlin. Dixon took fifth ahead of McLaughlin, who lies second in the championship after four races.

Romain Grosjean finished seventh after a heated on-track battle with Graham Rahal in the closing laps as the two bashed wheels while jockeying for position. Rahal ran out of fuel on the final tour, but was able to keep a place in the top 10, ahead of Alexander Rossi in ninth, and Colton Herta – who spun trying to lunge past McLaughlin – in tenth.

Grosjean and Herta were among a number of drivers who committed early to a three-stop strategy, but a full-course caution on lap 32 for Callum Ilott spinning off at the Museum corner complex (turn seven) proved detrimental to their chances of winning the race over those that opted for a two-stop strategy.

Another driver who tried the three-stop strategy was Josef Newgarden, who went into the weekend with the championship lead. He finished 13th after losing out to the likes of Herta and Grosjean over the second half of the race, and now slips to third in points.

The Grand Prix of Indianapolis is next on the calendar, taking place on Saturday, 14 May at the Indy road course.