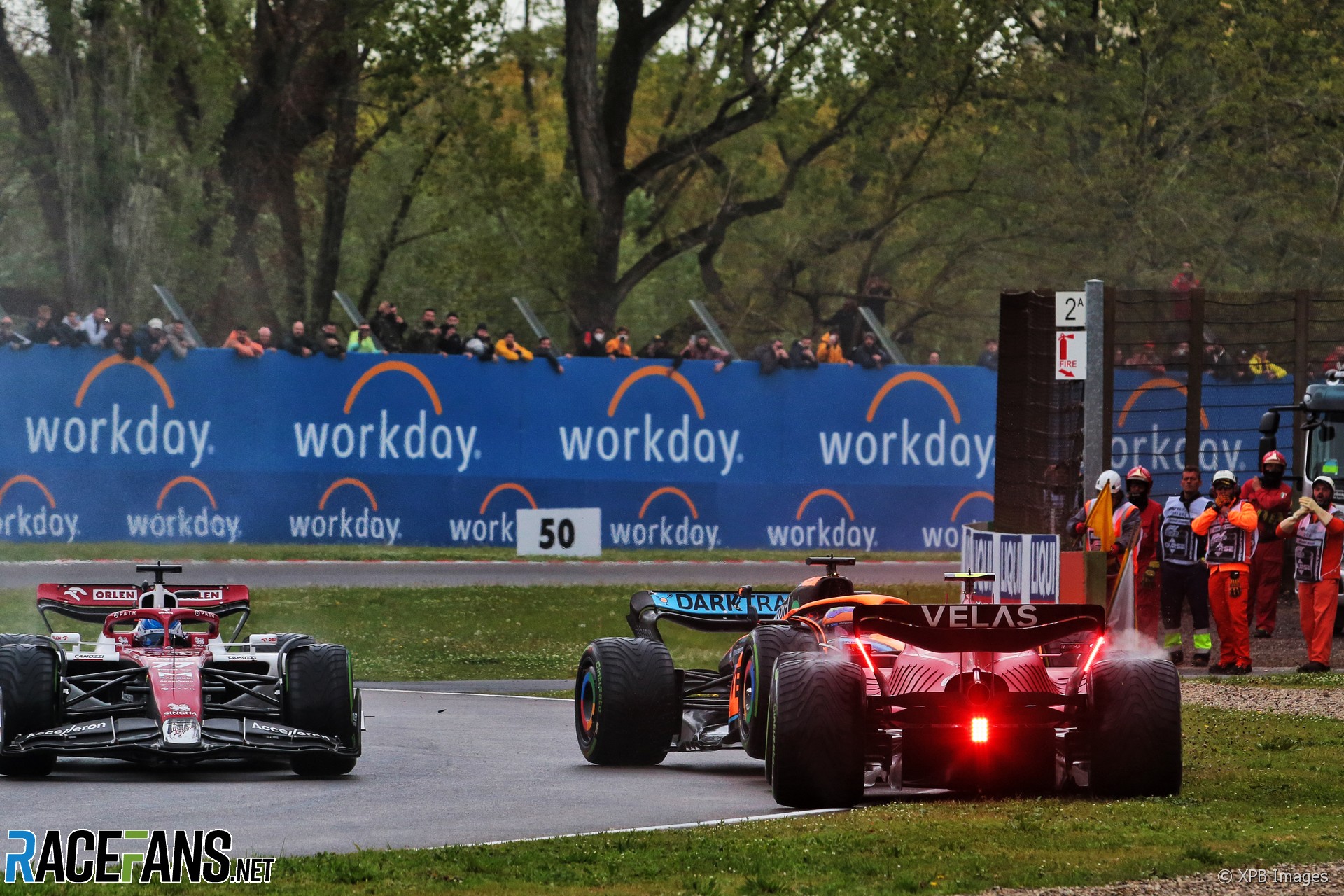 In the round-up: Daniel Ricciardo says it was important for him to apologise to Carlos Sainz Jnr after their lap one clash at Imola and ‘clean the slate’ with the Ferrari driver

Daniel Ricciardo says it was important for him to apologise to Carlos Sainz Jnr after their lap one clash at Imola and ‘clean the slate’ with the Ferrari driver.

The pair collided at the first turn in the Emilia-Romagna Grand Prix, knocking Sainz out of the race and leaving Ricciardo with diffuser damage that hampered him the entire race. After the race, Ricciardo visited the Ferrari hospitality suite to apologise in person to Sainz for the contact.

Speaking on an appearance on The Daily Show with Trevor Noah, Ricciardo said it was important for him to make sure there would be no hard feelings between the pair moving forward through the rest of the season.

“I hated every second of the apology!,” Ricciardo told host Trevor Noah. “I guess probably with experience, being in it for so long, I have the maturity, I guess, to know now how much we all put into it. And as competitive as we are, we all have something strongly in common.

“There’s only 20 of us who do it – there’s only 20 F1 drivers. You kind of just respect everyone’s journey. Like the incident – if I hold myself accountable, I feel like I want to just apologise. It’s nothing personal. I don’t think everyone would do it, but for me, I just felt better by doing it. So we kind of just clean the slate for the next one and I know that when we come alongside each other on track next, there’s no intensity. There’ll be an intensity, but nothing heightened, I guess.

McLaren ‘know the strengths and weaknesses of our car now’ – Seidl

McLaren team principal Andreas Seidl says the team have now established what the main strengths and weaknesses of their car are after the opening four races of the 2022 season.

The team enjoyed their first podium finish of the season in Imola after a tough start to the season in Bahrain that saw them finish outside of the top ten. Seidl says that McLaren now have a “clear idea” of where the MCL36’s strengths are.

“Definitely we improved our understanding of the car over the last couple of weekends after we had to play catch up with missing out on all these laps at the test in Bahrain,” said Seidl.

“I guess we have a clear idea on the strengths and weaknesses of our car. I have a clear idea of what we have to address in order to bring more performance to the car. We have a clear plan in place of how we’re going to do at. We have to manage a lot of parameters, like cost cap as well, reduced wind tunnel time, etc, etc, but I’m very happy with what I’m seeing the team is doing and how the team is attacking that challenge.”

McLaren SP driver Alex Palou believes that a Drive to Survive style documentary series would help to promote the popularity of IndyCar.

The success of the Netflix-produced show has been credited with the growth of Formula 1’s popularity in recent years. Palou thinks it would be “amazing” to have an equivalent show for IndyCar

“I think everybody saw what the Drive to Survive did to the series, and especially to the drivers and people working there,” said Palou.

“They told a story that maybe for really every motorsports enthusiastic kind of person that are following every session that you know that it’s a bit too dramatic, but it works for normal people and new fans, which that’s what they want and that’s what we want, as well. So yeah, absolutely. I think it would be amazing to have something close to that.”

McLaren says it is “investigating” abusive comments about Lewis Hamilton allegedly made by an employee of the company on Twitter. “We consider these comments to be completely at odds with our values and culture at McLaren. We take the matter extremely seriously and are investigating it as a priority,” it said in a statement.

Robin Frijns is asked for his thoughts on Gen3

after a substantial pause he says "interesting"

You can see the car for yourself at @CiscoLive this year!

"A critically injured person was flown by helicopter to a hospital after being hurt in a possible explosion at Hard Rock Stadium in Miami Gardens, according to Miami-Dade Fire Rescue. Another person was taken to the hospital by ambulance."

There’s no stopping Toto Wolff, the F1 CEO with an unwavering will to win (LinkedIn)

"I'm running people that run race cars and our sport is very intense. We're racing 23 times a year on the weekends. I think that attracts a certain species of people, very competitive and ambitious, highly educated. And so my job is actually to provide these people a framework where they can operate the best — and I enjoy it."

"I think unquestionably America is going to be at some point in the future our largest audience. There’s so much interest. I think America is very, very good at supporting women’s sport."

"Taking responsibility for the future doesn't mean you have to sacrifice your quality of life – it's about finding sustainable ways to have fun. That way, you can enjoy life with a clear conscience and protect the environment at the same time."

"Honestly, I don’t understand all the comments (about raising the weight limit again) because that I think it’s the target for everybody that when you are designing a racing car the weight is always the target number one."

Fittipaldi’s Guest Column: I was happy to show our real pace (Formula 2)

" It was simply amazing! We were able to show our pace on track. We were fast all weekend, so I was very happy to show our real pace on Sunday, with great overtakes along the way."

So many of Oregon’s single-seater refugees, most of whom are now hot property with a roof over their head, have spoken so glowingly of the team that it only made sense to find out what the fuss was about. And it certainly wasn’t what we expected.

After Pierre Gasly exclusively told RaceFans that he feels he deserves to be racing alongside the likes of Max Verstappen, Charles Leclerc and Lando Norris, @geemac says it’s never a case of drivers getting opportunities because they deserve them…

Gasly is a top quality Grand Prix driver and my respect for him went through the roof when I read his great article in the Player’s Tribune. He is still in F1 and has a decent car at his disposal. He is a Grand Prix winner. Even if his career ended tomorrow he would go down as a far better driver than the overwhelming majority of those who have started a world championship Grand Prix. But he does not “deserve” anything. He needs to continue to claw away and fight for everything he can get. If the cards fall his way, he has everything he needs to grab any opportunity with both hands.
@geemac

A selection of RaceFans’s top reads from last month which you might have missed:

Get the best of our motorsport coverage after every F1 race in your inbox – sign up for the free RaceFans email Newsletter:

41 comments on “Apology to Sainz was important to “clean the slate”, says Ricciardo”