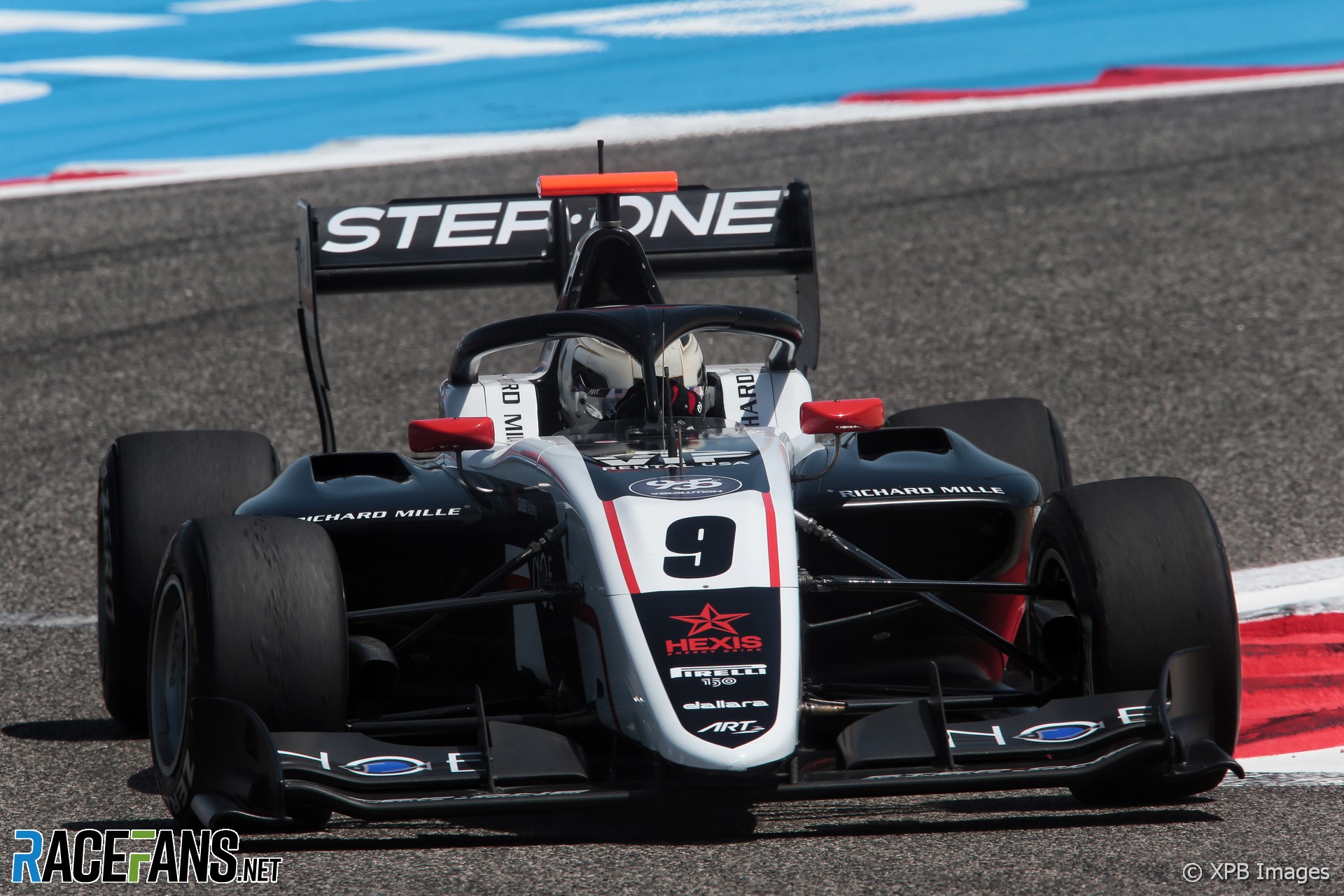 In the round-up: Juan Manuel Correa has revealed he has suffered a leg fracture which may prevent him from taking part in the next round of the FIA Formula 3 series at Imola in two weeks’ time.

Correa said he began experiencing pain during the opening F3 round in Bahrain three weeks ago, which worsened in the F3 test at Jerez which ended three days ago.

“A few weeks ago in Bahrain during the race I started getting this very sharp pain in my left foot,” he said in a social media post. “We got it checked out, it seemed like it was just some tendon inflammation, I got some rest over the last few weeks.

“But a few days ago in the Jerez test, the pain came back. So we did an MRI scan yesterday night, got the results today and there is indeed a stress fracture there.”

Correa suffered extremely serious leg injuries in the 2019 Formula 2 crash at Spa-Francorchamps which claimed the life of Anthoine Hubert. He returned to racing in F3 last year following a long recuperation.

He said he is “extremely disappointed” by the development.” I thought I wouldn’t have to deal with any more injuries this year, and I thought I had enough of it last year. But it continues, it is what it is.”

He was due to take part in next week’s European Le Mans Series season-opener at Paul Ricard. Correa lies fifth in the F3 standings and was due to race at Imola the week after that.

“The doctors have recommended a couple of weeks of rest,” he said. “Let’s see how it heals itself, how the pain improves. Obviously, this means there will be no ELMS race next week. No testing either, and no F3 testing.

“As it stands, even Imola in F3 might be at risk. So we’re going to try to push the recovery to be able to do the Imola race. But nothing is guaranteed.”

Maserati, which announced it would enter Formula E in January, confirmed last night that it will attach its factory efforts to the existing Venturi team.

The Monegasque outfit has been supplied a powertrain by Mercedes for the past two seasons, after having spent the prior five as a constructor itself. Following Mercedes’ departure from the series at the end of this year, Venturi has elected to partner with Maserati in a multi-year deal coinciding with the introduction of Formula E’s ‘Gen3’ car.

Team principal Jerome D’Ambrosio said “I think the partnership presents the opportunity to continue being a team that’s going to be fighting on the front and fighting for victories in races, hopefully for championships as well.

“Then there’s something which is obviously very important to us, it’s not only about what you do, but how you do it. And we found a brand with whom we are aligned and we’re very much alike in terms of our core values, what we stand for, and this is important because that’s something that we don’t we don’t want to lose.”

IndyCar has handed a six-place grid penalty to Devlin DeFrancesco for this weekend’s race at Long Beach after judging the Andretti Steinbrenner driver caused “avoidable contact” in the previous round at Texas Motor Speedway.

DeFranceso triggered a three-car collision with Helio Castroneves and Graham Rahal which put all three out of the race. He also had a close run-in with Kyle Kirkwood earlier in the race, which left the Foyt driver in the barrier.

Alexander Albon says Williams will go “full attack” to limit the damage of his three-place grid penalty that will be applied before Sunday’s Australian Grand Prix.

Albon was handed the drop by the stewards of the Saudi Arabian Grand Prix after he was deemed responsible for colliding with Lance Stroll in the closing laps of the race. The Williams driver says any position he gains on Saturday will help his chances for Sunday.

“We’ve got to fight this weekend,” says Albon. “We don’t know how overtaking is on this circuit. If we can get into Q2, that would be great. Any position helps later on Sunday. I think we’ll go full attack this weekend – but of course we do understand that the race is more of a priority.”

After a strangely-placed start line, around a blind corner, led to

Formula E has repositioned the starting line at its Rome track. It was previously located close to a blind corner, and is now on a straight at the most downhill part of the track.

Jaguar’s Mitch Evans, who won the team’s first race in Rome in 2019, said the change is an improvement, but pointed out it means the field will rapidly arrive at one of the narrowest parts of the track after the start. “That turn seven’s still pretty early in the lap,” he said. “So I think turn one should be better, there’s no real ideal place here but I think the run up to turn seven could be quite sketchy because cold brakes, cold tyres, no tyre pressure, no regen, so I feel like it’s going to be messy.

“But there’s no real ideal place, obviously with Formula E one of the downsides is, when you get to the races, there’s carnage at turn one – and turn one’s going to be tight but my concern is more the run up to turn seven.”

The previous largest estimated attendance for day two of the event was 84,500, set back in 2019.

How long does @alo_oficial intend to stay in @F1?

He said last November he plans to carry on for 'two or three more years', a line he repeated last month and again in today's #AustralianGP press conference.

Reigning #F2 champion @OscarPiastri may have to wait for his #F1 debut. pic.twitter.com/rTBUAtj3xn

Didn't get around to asking him what it's like to flip a Jordan here #F1 pic.twitter.com/gSsBkYT5wG

Looks like they went back to the press conference room for a GPDA meeting following the drivers briefing. Would like to be a fly on the wall. #AMuS #F1

"This is a problem for Charles (Leclerc) because Sainz, who is number two, can occasionally find himself in front: if I were Mattia (Binotto) I would give precise orders as in my day, because beating Verstappen is already tough, if you have a teammate who can snatch points... Perez under normal conditions - he can't beat Max."

"It’s healthy for Formula 1 if you’ve got six drivers that are competing for a victory every weekend. You can see that the cars are easier to race, there’s going to be more competitive, close-quarter racing, so I think that’s only a positive. Ferrari have been a sleeping giant the last few years, they’ve got their act together. They’ve obviously put a lot of effort into this car early on, and they’re going to be very tough to beat this year."

"Size-related overtaking issues are present everywhere but are made worse on tighter circuits like Albert Park, where the large cars naturally become more of a problem. With new street circuits being added to the calendar with regularity (we already have Miami this year and Las Vegas next), this could become a persistent issue. "

"Steiner tells me Haas doesn’t have any fan events planned as of yet, but it’s something they’re considering. In the meantime, he says, &quotjust switch on the TV and root for us.""

"Following requests from several ASNs, the FIA requested that the maximum number of entries in the FIA Karting Academy Trophy be increased in line with the diversity objective of the FIA's new governance. In agreement with the partners concerned, the FIA was able to obtain the allocation of three additional karts. 54 karts instead of 51 will therefore be able to take the start of the first event from 12th to 15th May 2022 in Genk (BEL)."

"The amount of energy wasted can send shivers down your spine – particularly if you are walking past a badly designed supermarket refrigeration unit. This particular problem was addressed by Williams Advanced Engineering and Aerofoil Energy, who together developed F1-inspired aerofoil shelf-edge technology to keep the cold air within the fridge and thus save energy."

As Sebastian Vettel is fined £4,100 for using a moped on the circuit without permission, @bullfrog notes a secondary rule infringement the Aston Martin driver has committed…

Not one of his allocated sets of tyres. They’ll make him start the race on it.
@bullfrog