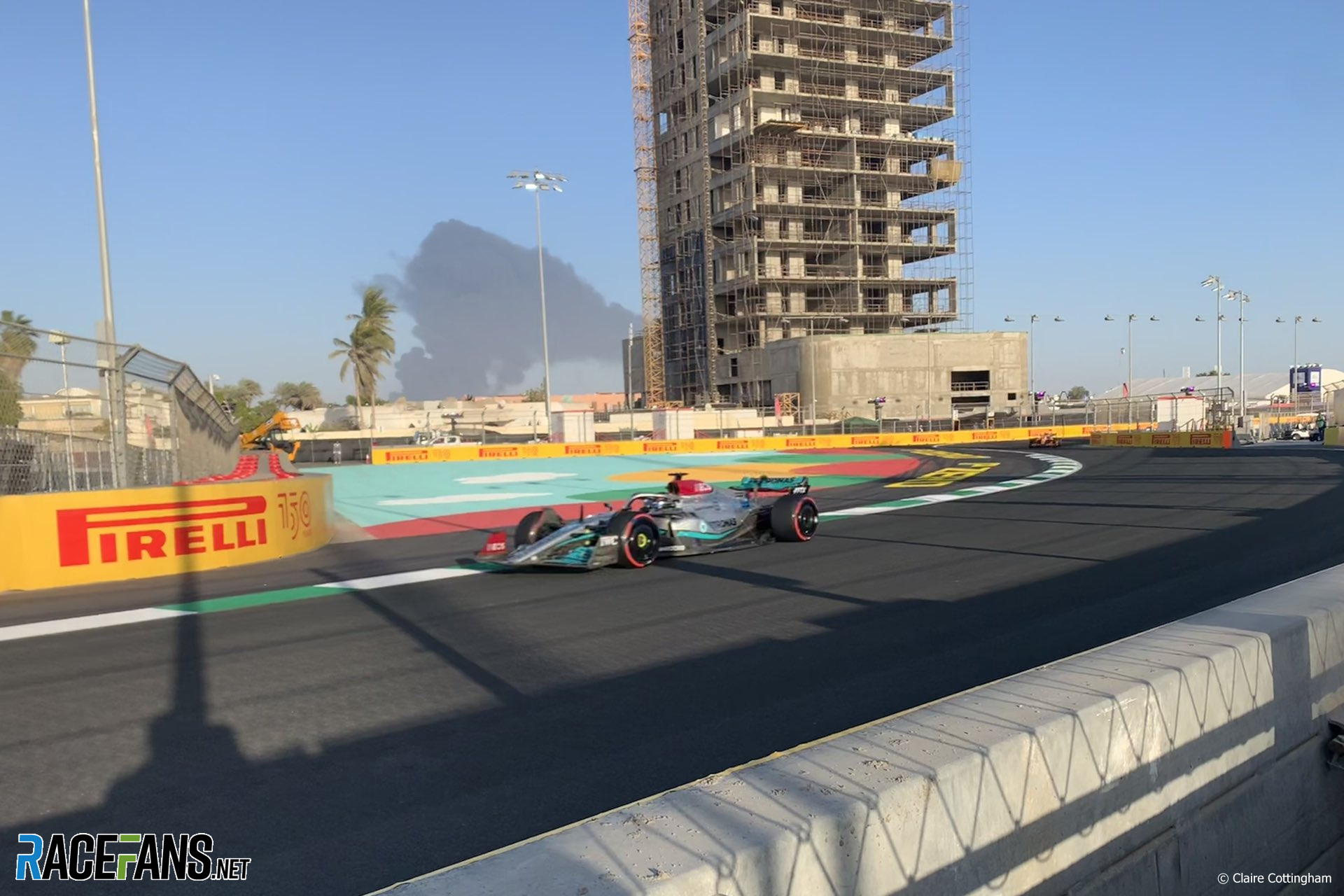 A thick smoke cloud visible from the track during first practice signalled a disturbing turn of events at the Saudi Arabian Grand Prix. Claire Cottingham saw it unfold in Jeddah.

Most of the media arrived at the track early, as in Bahrain, despite the reduction in teams’ media activities. I flew in overnight on Wednesday and had spent much of my first day exploring the old town in Jeddah with a friend.

I had some apprehensions and was advised that I should always travel with a male companion, especially if it was away from F1 commitments. Luckily, the organisers had put on media shuttles and I was comfortably able to make my way to the Jeddah Corniche Circuit, however I felt I probably would’ve been fine going alone.

On our journey in, I noticed how unfinished and run-down the outside of the track looked, but reserved any judgement until I entered the circuit, despite the chaos on the roads around it.

The media centre, or I should say, media island, is stunning. An old holiday resort turned into an F1 facility with a spectacular view overlooking the Red Sea.

Haas were first up in the media schedule, and we were greeted by a relatively relaxed Mick Schumacher. He is often portrayed as quite a serious character, but now in his second season has slowly started to show more of his personality, cracking jokes and clearly becoming more comfortable in his surroundings and around the media.

The welcome barbecue for the paddock got underway with the normal pre-race weekend buzz in the sea air. So far, so good, it seemed.

Friday felt like any normal day in F1, with media commitments getting underway without a hitch. In the press conference I asked Max Verstappen what he made of F1 CEO Stefano Domenicali’s hopes of persuading him to drop his objections to participating in Netflix’s Drive to Survive.

The world champion made it plain he has serious concerns over how drivers are presented in the programme – not only himself, but the likes of Lando Norris too: “They made it look like Lando was a bit of a dick, which he isn’t,” he told me.

During first practice I headed trackside to the exit of turn six to see how these cars would fare around an incredibly tricky and fast circuit. My preconceptions of being in Saudi Arabia as a woman were changing, and I was starting to relax and enjoy myself with the friendly locals working in and around the circuit.

Around 17 minutes into the session, a red flag was shown after Norris ran over a 50-metre marker board which had fallen onto the track. Standing behind the metal barriers overlooking the course, I could see the grandstand, the kerbs on the exit of the corner and smell the tyres being scrubbed from the Formula 2 paddock behind.

Then my eye was caught by a small puff of smoke forming off on the horizon, beyond the F1 bubble. I snapped a picture of it as George Russell passed by.

Slightly concerned, I pointed it out to a colleague from another publication and drew it to the attention of the FIA’s communication team, who had yet to hear of anything out of the ordinary. On track, Verstappen complained of a burning smell, which his team said did not appear to be coming from his car.

At first it wasn’t clear what had caused the smoke. When my colleague and I realised it was coming from an oil plant around 10 kilometres away, we quickly began to realise the seriousness of the situation which was unfolding.

The smoke began to fill the air, sweeping away from the circuit creating a blanket of darkness in the sky as the cars whizzed past. We knew the North Jeddah plant had been targeted by Yemen’s Houthi rebels in recent years as part of a wider barrage, the most recent attack occurring only a week before we arrived in the country.

I asked a local marshal what it could be. He looked up, shrugged and replied: “I hope nothing bad.”

Increasingly unnerved by the situation, we returned to the media centre, as unconfirmed reports emerged that it was indeed an attack on the country. Suddenly everything felt a little too real. Now everyone seemed to be on their phones and an eerie silence began to fall over the paddock.

The second practice session was delayed by 15 minutes while an emergency meeting was called for drivers, F1 bosses and team principals as information was fed back from the Saudi authorities. The session started, but thoughts were elsewhere.

What did the drivers make of it all? We weren’t to know as all their post-session interviews were cancelled. The FIA and F1 announced the event would continue. As I made my way back to the hotel on the last shuttle I called home to tell them I was safe.

Meanwhile the drivers were in another meeting, and as the night wore on it became obvious they had serious doubts about the event. I hopped back into a taxi with a colleague at 2am to find out more as the three-hour summit concluded and the drivers, team principals and others dispersed into the paddock.

The consensus seemed to be “we’re going racing,” and at around 4am we made our way back to the hotel.

Waking up to a flood of text messages from friends and family at home, I faced the same decision as the drivers: To stay or to go? As a journalist, I knew what my decision had to be. It felt strange, but being in a situation like that is far easier than watching someone you love go through it from afar.

During the lengthy meeting, teams and drivers had seemingly been given some solid information regarding safety surrounding the race and, after what sounded like some convincing, they had decided to go ahead.

The team principals’ press conference got underway ahead of qualifying in a room packed with journalists wanting to know how the drivers had been persuaded to race.

When qualifying finally began it felt like a welcome break from off-track conversations. But the mood shifted again when Schumacher crashed heavily during Q2. It’s hard to describe what the feeling is like at that moment in a paddock when you’re all too aware of what the consequences could be. We held our breath and hoped for the best, watching the wrecked Haas car removed from the circuit.

Thankfully the incredibly helpful Haas PR team updated us that Mick was conscious and had spoken to his mother, and during a lengthy red flag period, the air ambulance took him to be checked over in hospital.

Qualifying restarted after an hour’s delay. I noticed McLaren CEO Zak Brown walking past me with his backpack on, leaving the track before the session ended. Clearly last night’s 4am finish was getting to everyone.

After an incredibly long and trying 24 hours, I left the track around 2am. At this point it was clear we were all on Lewis Hamilton’s wavelength with his post-qualifying comments: We all wanted the weekend to be over.

Shattered but anxious from the events of the weekend, I woke up far too early for someone who had fallen asleep at gone 3am.

As with most race events, I tend to head to the circuit way too early, even when nothing is happening, because, let’s be honest it’s far more interesting than sitting in a hotel room on your own.

The camp was tired. Most of us had been on the road since the Bahrain test and everyone just hoped for a safe race. Of course we know we’re in a privileged position, and I would never suggest otherwise, but we’re all human.

Thankfully we heard the news that Schumacher was back at the circuit, and was even up for a chat with the media. Bright-eyed and looking relatively chipper, he calmly explained to us what happened. The car was in pieces after the crash, and the team had elected not to commit to a hurried rebuild when the chassis needs to be freighted off to Melbourne for the next round.

With the regular pre-race buzz slightly muted, I headed back to the media centre to catch the start. It proved something of a slow burner of a race, but it definitely delivered in the final laps, as Verstappen and Charles Leclerc duelled thrillingly for the lead. I legged it down to the paddock for post-race interviews.

Drivers speak to the TV crews first in what we call the ‘pen’ and then they are brought over to the ‘mixed zone’ for the print journalists to ask questions. Fireworks filled the sky 15 minutes or so after the race, and naturally, after recent events, startled us all as Mercedes’ George Russell made his way over to speak to us.

I finished the evening interviewing the Alpine drivers and team principal Otmar Szafnauer, who raised no objections to how hard the pair fought each other on track. With that, the long weekend was over.

It was a tough event for all, though thankfully we all remained safe. But it raised more questions than it answered about whether F1 racing in Saudi Arabia has a future.

Become an RaceFans Supporter today and browse the site ad-free. Sign up or find out mor via the links below: