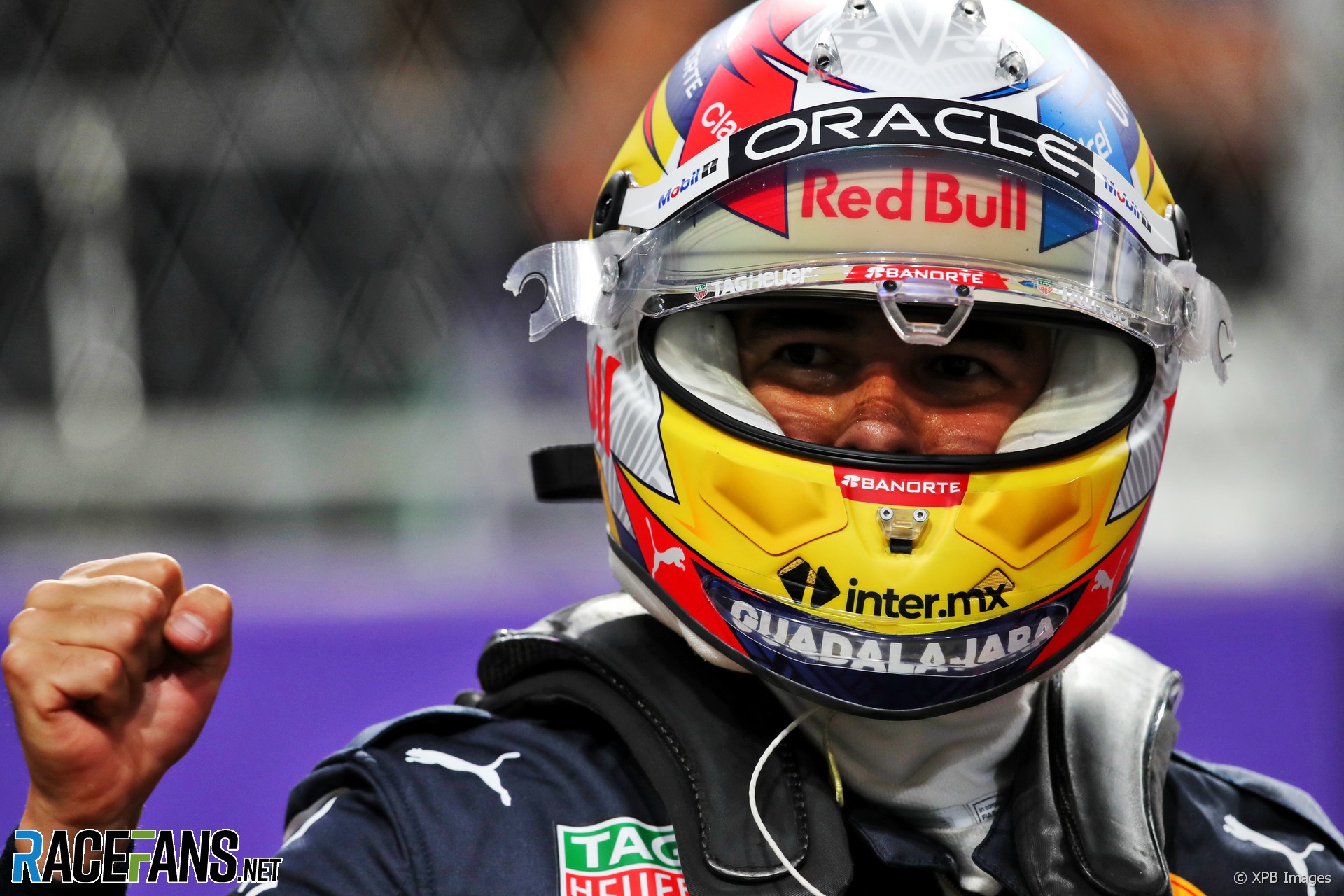 Sergio Perez took his first pole position of his Formula 1 career after pipping Charles Leclerc at the end of a disrupted qualifying session in Saudi Arabia.

After an hour delay following a heavy crash for Mick Schumacher, Perez’s final effort of Q3 was enough to secure pole position by just 0.025s from Leclerc. Carlos Sainz Jnr will line up third on the grid ahead of world champion Max Verstappen. Lewis Hamilton will start from 16th on the grid after he was eliminated in Q1.

The first phase of qualifying began in cool conditions with track temperatures hovering around 16 degrees, but with much calmer winds than during the final practice session.

Both Ferraris of Leclerc and Sainz took to the track early, while the Mercedes of Lewis Hamilton and George Russell chose to attempt their first laps of the sessions on the medium tyres. However, Hamilton made a mistake through the fast left hander of turn four, ruining his first lap after it had only just begun.

The Haas pair of Kevin Magnussen and Schumacher were fastest in the early moments, before Sainz began setting purple sectors on his first attempt. However, he was not able to finish the lap as the session was red flagged due to Nicholas Latifi crashing the Williams into the tyre barrier at the long turn 13 hairpin.

Once Latifi’s car was recovered, the session was resumed with just over 11 minutes of time remaining. Verstappen immediately posted the quickest time of a 1’29.330, but he was soon beaten by both Ferraris with Leclerc and Sainz jumping to the top of the times.

Yuki Tsunoda was told to pit with the team warning him of a fuel issue on his AlphaTauri. The team were unable to get him back out and he was eliminated without setting a lap time.

In the final minutes, Hamilton was sitting on the cusp of elimination in 16th place. Despite reporting that he was unable to improve, Hamilton was able to go faster at the chequered flag, but only up to 15th. His time was immediately beaten by Lance Stroll in the Aston Martin, knocking him back down to 16th place and confirming his elimination from Q1.

Hamilton was joined in the dropzone by Alex Albon’s Williams and Nico Hulkenberg in the second Aston Martin. Latifi ended the session 19th following his accident, with Tsunoda in 20th and last after failing to set a time.

The second session began with all drivers using the soft tyres once more, except for Russell in the Mercedes who again opted for the medium tyres.

Leclerc went quickest in the early part of the session, with Perez less than half a tenth off from the Ferrari in second. Russell’s first lap on mediums was good enough to go third fastest, until he was shuffled down to seventh place as he was beaten by the likes of Verstappen, Sainz, Alonso and Bottas.

Esteban Ocon was frustrated when he was clearly blocked by Daniel Ricciardo during his hot lap through the fast sequence between turns four and 12. The stewards confirmed they will investigate the incident after qualifying.

With five minutes remaining in the session, qualifying was stopped for a second time after a frightening accident for Schumacher. After running over the kerbs on the exit of turn 10, Schumacher lost the rear of the car and skidded into the wall at high speed, suffering a violent impact that sent the destroyed Haas sliding into the opposite wall.

The session was suspended for a full hour as Schumacher was attended to by the Medical Car team. The Haas driver was extracted from the car under the FIA medical procedure and brought to the medical centre for examination. Thankfully, Haas confirmed that Schumacher was “physically in good condition,” but that their driver would be transported to a local hospital for further precautionary checks.

When the session restarted, Russell ventured back out onto the circuit with soft tyres. But despite the expected pace advantage of the red-walled tyres, he was unable to improve on his best time. Magnussen was able to improve and jump into the top ten, but Lando Norris could not find the time he needed to secure a a place in Q3.

Ricciardo improved but only enough to go 12th, just behind his team mate. Zhou Guanyu failed to find the time he needed to get into the top ten and was eliminated in 13th. The final two drivers to drop out of qualifying were Schumacher and Lance Stroll, who ended the session in 15th and slowest in the Aston Martin.

As it was in Bahrain, the final phase of qualifying would be a shootout between Ferrari and Red Bull for pole position.

Ferrari were the first of the frontrunners to set an initial hot lap, with Leclerc setting a 1’28.446. That was beaten by team mate Sainz, by just under half a tenth to give him the advantage between the pair heading into the second runs.

Red Bull followed, with Perez going into third place on his first attempt, a tenth-and-a-half away from Sainz’s provisional pole time. Verstappen endured a scruffy lap on his first effort, going sixth behind the two Alpines of Esteban Ocon and Fernando Alonso, which then became seventh after Russell went fifth fastest for Mercedes and then eighth after Bottas put his Alfa Romeo into sixth.

It all came down to the final runs to decide whether Sainz would secure a maiden pole position. Sainz could not improve over his previous time, leaving the door open for Leclerc. A strong lap from Leclerc saw him take provisional pole as the chequered flag flew, but Perez went fastest of all in the middle sector, putting Ferrari’s pole under threat.

Perez finished off his lap to take pole position with a 1’28.000, just 0.025s ahead of the Ferraris. Only Verstappen was left with a realistic chance to deny his team mate his first career pole in Formula 1 at his 215th attempt, but he could not find enough time and was forced to settle for fourth, behind his team mate and the two Ferraris.

Ocon secured fifth on the grid for Alpine, with Russell sitting behind him in sixth, ahead of Alonso in seventh. Bottas took eighth place for Alfa Romeo, with Pierre Gasly and Kevin Magnussen rounding out the top ten positions on the grid.