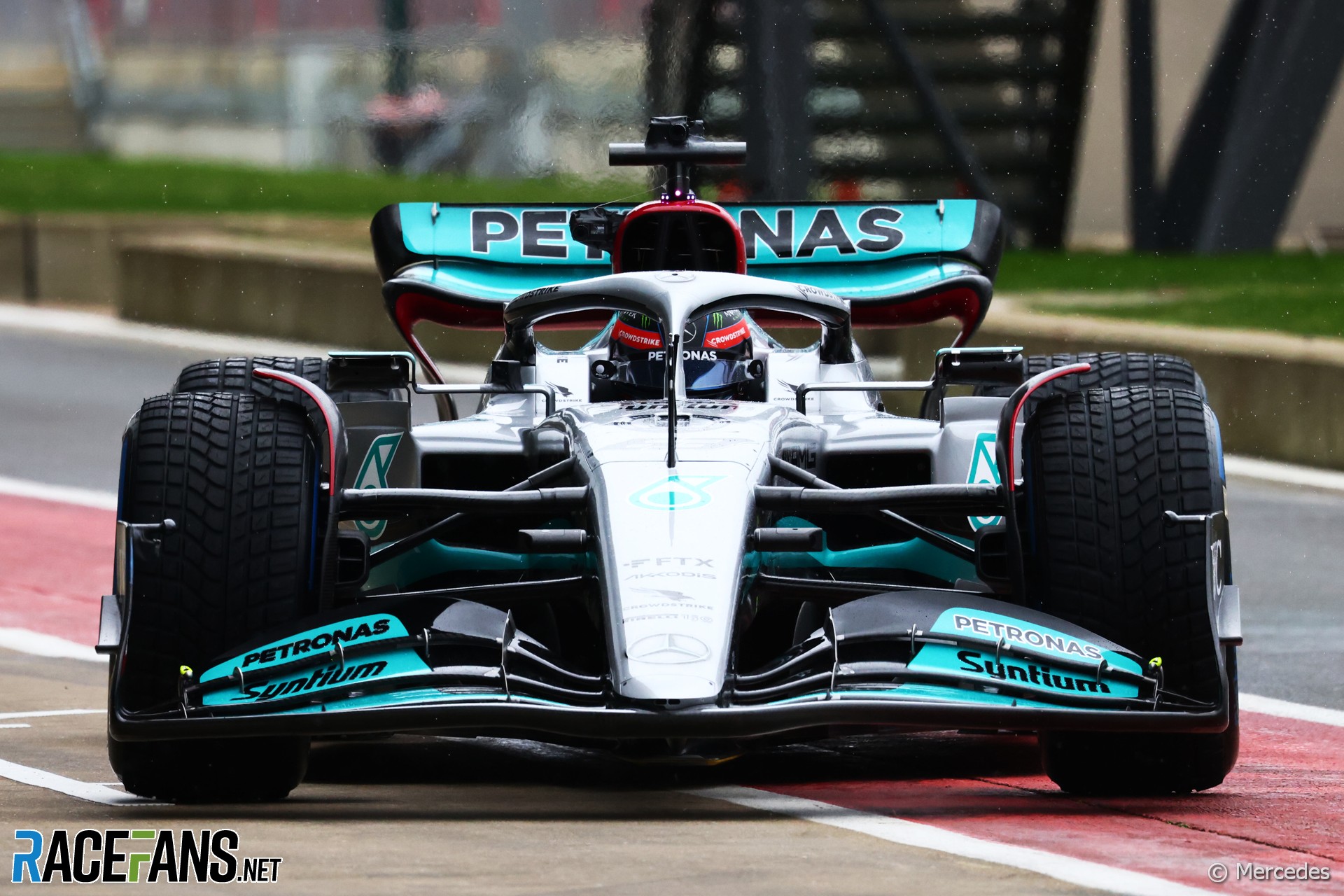 Mercedes launched their 2022 contender, the W13, via a live stream event and conducted a shakedown on the same day at Silverstone.

The team, which constructs its chassis not far away in Brackley (its engine facility is in Brixworth), aims to continue its record-breaking run of eight consecutive constructors championships. But sustaining its success across two seasons in which the regulations have changed so drastically will be a huge challenge, even for one of Mercedes’ formidable resources.

“We can’t rely on past success for this year’s performance,” team principal Toto Wolff admitted, “but we can rely on our people, our culture, our structure, and our mindset to do the best possible job for 2022.”

The renders Mercedes released of the W13 differed from the car which was photographed lapping Silverstone in a few key areas. The W13 revealed during the livestream appeared to be the closest to a track-ready specification we have seen from the launches this year. With all four Mercedes-powered cars having appeared, we can spot the different approaches to packaging taken by the factory team and its customers McLaren, Aston Martin and Williams.

Starting from the front of the car, Mercedes have joined the likes of Ferrari and AlphaTauri by attaching their nose to the main plane of the front wing. The nose itself is boxy and square with a similar profile to that of AlphaTauri and the Aston Martin.

Like the Ferrari, the W13’s nose also seems to have a hole at the tip (1). These small holes could be for driver cooling or to pass some air through to the underside of the nose to help keep the airflow clean. This would have a similar effect to the cars with a gap between the nose and the main plane of the front wing. Mercedes has strived to keep a similar design philosophy from the W12 on the front wing of the W13. Compared to other teams, the front wing is more ‘outboarded’ with the chord of the elements being relatively consistent all the way out until the boundary provided by the rules (2). The curvature on these elements also suggests that the front wing is more mid-loaded; they attach to the nose further forward providing a clear path for the underfloor inlets (3).

The team may have also tried to re-create the Y250 vortex – a key design trait of the previous generation of cars – using the steep curvature of the wing. The Y250 vortex came to shape aerodynamics in F1 starting in the early 2010s by using the wing-tip vortices formed at the inner tips of upper elements on the front wing. It got its nickname ‘Y250’ as the old regulations stipulated these elements must be no less than 250 mm from the centreline in the horizontal (‘y’) direction.

While the new regulations have tried to eliminate the generation of vortices in this region by mandating all front wing elements to the nose, a vortex can still develop in any span-wise (along the width of the wing) change in lift coefficient. On the W13 there is a pronounced change in the steepness of the curvature on the uppermost element (4).

To further help the development of the vortex, a vertical vane is placed in line with the ‘inflection’ point of the curvature (4) indicating that the aerodynamicists at Mercedes are indeed trying to continue building a vortex in the region where the Y250 used to reside. Overall, the angle of attack of the front wing seems to be more aggressive than some of the other teams such as Ferrari and Williams. But no doubt all will try different designs when testing begins on Wednesday. 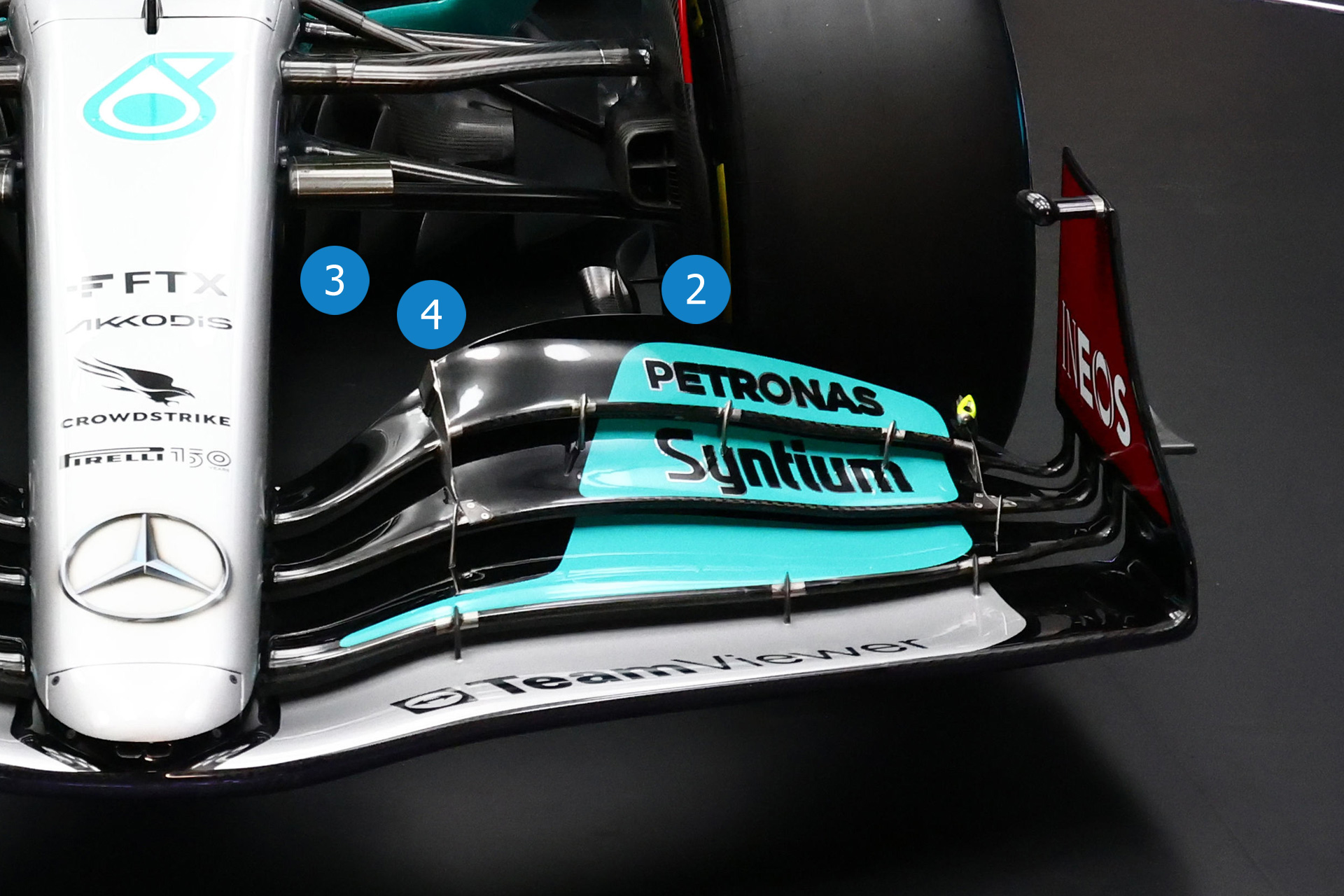 The general suspension set up of the W13 contains no surprises. Mercedes has gone with the push-rod option in the front and continued to use pull-rod suspension at the rear. However, what is interesting is the top wishbone of the front suspension is not a perfect triangle and in fact contains a kink (5), creating a more dog-legged shape at the front, something that is cleverly hidden in the renders.

It is unclear what the performance benefit of this is, but Mercedes may have been forced into creating this odd shape when trying to integrate the suspension as far forward as possible, away from the sidepod inlets and the inlet of the underfloor to maximize the clean airflow into this vital area of the car’s aerodynamics. 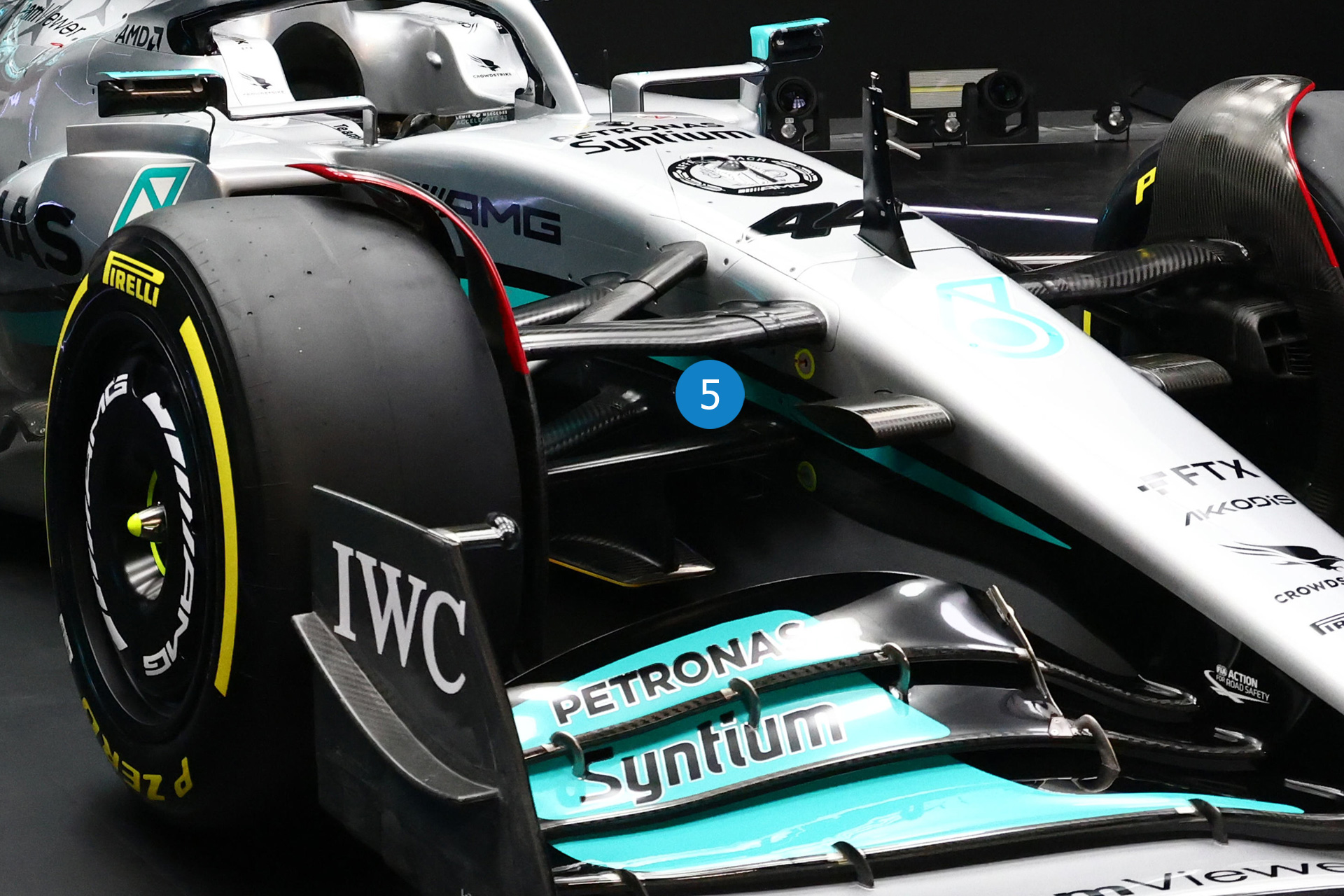 The brake ducts fall in line with Ferrari’s concept. With AlphaTauri, Mercedes, Ferrari, and Williams converging on what seems like similarly-sized brake inlets, it is doubtful that McLaren and Haas will run the small slits they have presented in their renders except on cold days. 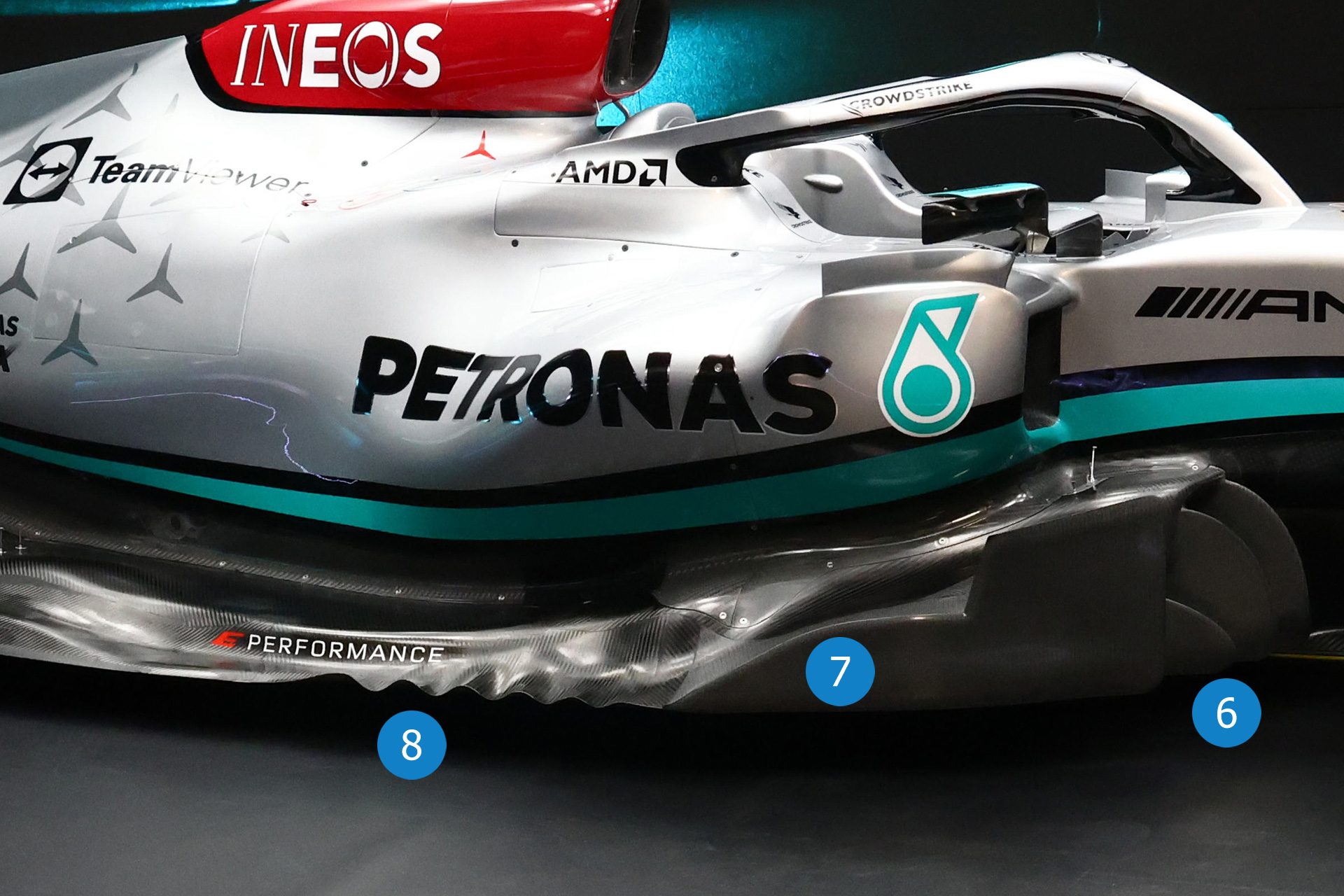 Mercedes displayed what appeared to be a track-ready iteration of their floor during their livestream event. It is clear that the aerodynamicists at Mercedes have spent considerable time shaping this concept.

While bargeboards have been outlawed in this new set of regulations, the W13 aims to regain some of this flow conditioning with the inlet to the floor. The outermost vertical vane on the inlet of the floor is considerably shorter than the others (6) and the sculpted section (7) over the top of the underfloor tunnel suggests that a flow field is being passed through and conditioned around the bottom of the sidepod as barge boards previously did. The wavy section on the outer edge of the floor behind this inlet (8) is most likely a vortex generator to effectively ‘seal’ the underfloor to the ground.

It is hard to see the full extent of the diffuser but it can be seen that the diffuser starts quite early and aggressively expands towards the back of the vehicle (9). To accommodate this, the rear suspension has been reworked to sit higher and further forwards than before. 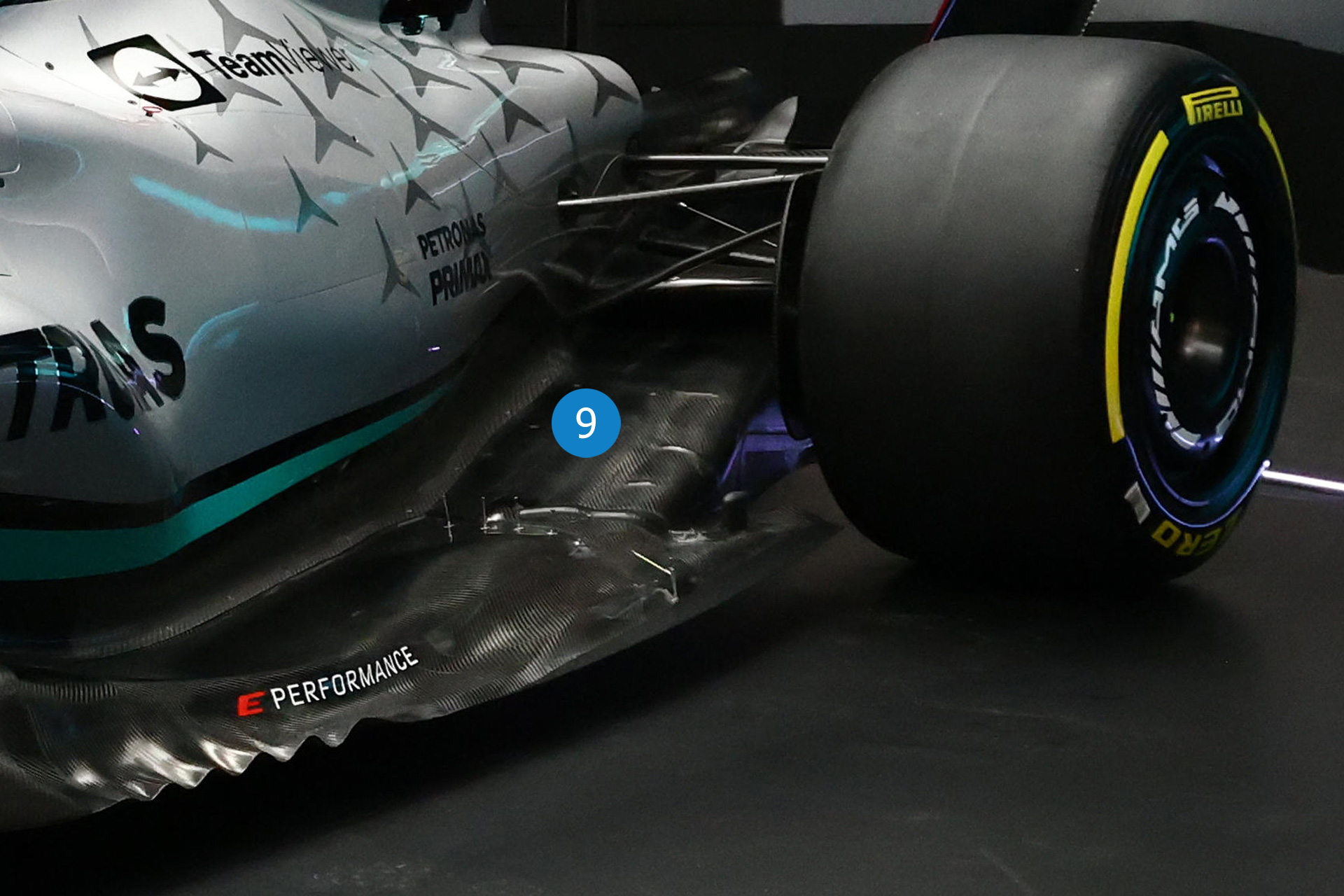 The sidepods on the W13 resemble both the McLaren and Aston Martin designs in different regards. The inlet area of the sidepod is remarkably similar to the AMR-22 with rectangular shaped inlets and a flat spot on the sidepod immediately outboard (10) to increase static pressure behind the front wheels to help outwash the front tyre wake.

The rear half of the sidepod is reminiscent of McLaren’s design and blends into the chassis as quickly as possible without a significant undercut. The engine cover is quite bulbous suggesting that Mercedes has opted to do most of its cooling along the centreline of the vehicle, in and around the power unit. With no cooling louvres to be seen, it seems that the W13 exhausts all of its hot air from their radiators out back towards the upper surface of the beam wing, something seen when the FW44 ran on track. 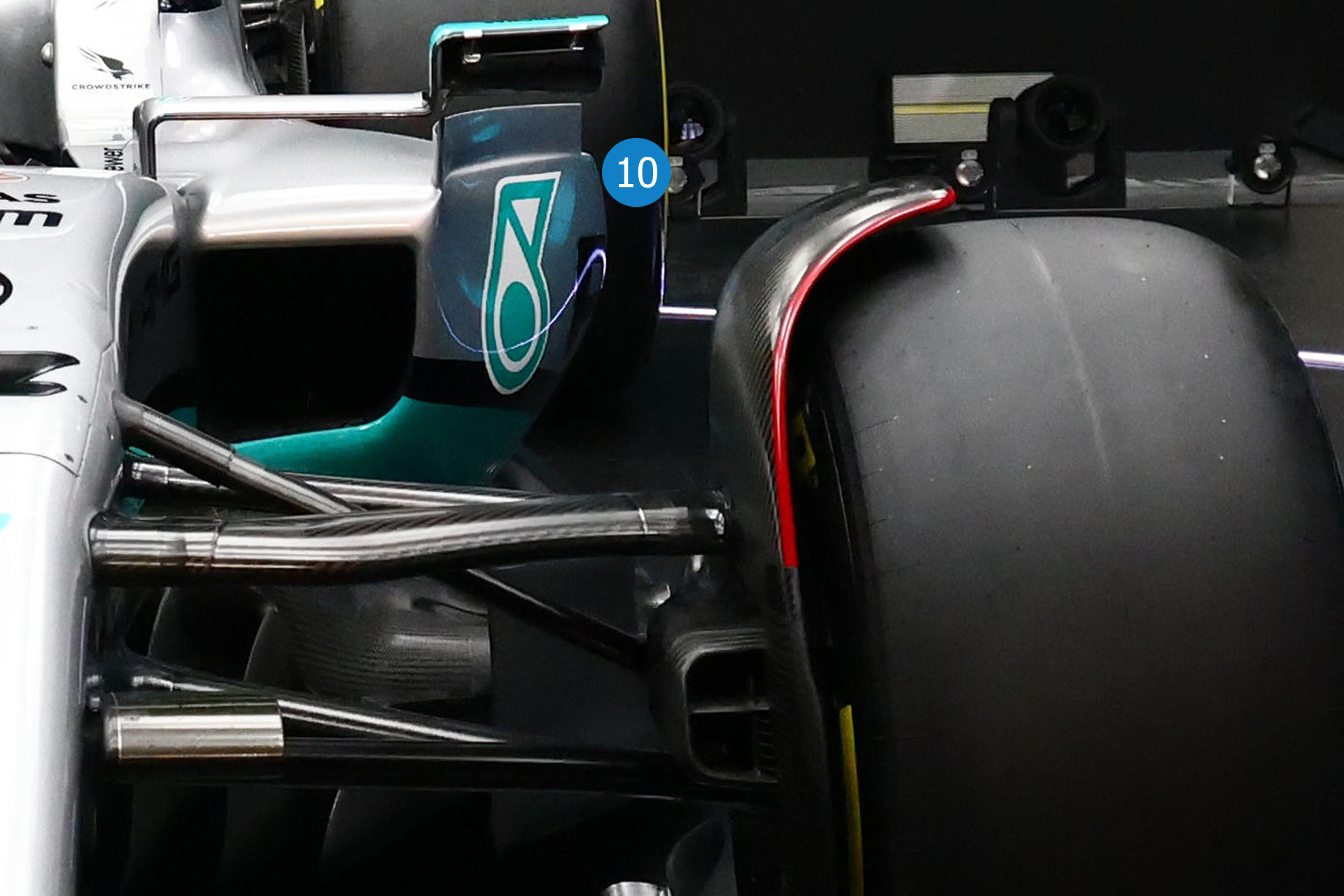 Mercedes has opted to go for a single swan-neck rear wing mount with the DRS actuator integrated elegantly with the mount (11). The main plane of the rear wing is relatively shallow and the overall shape is similar to that of the McLaren. 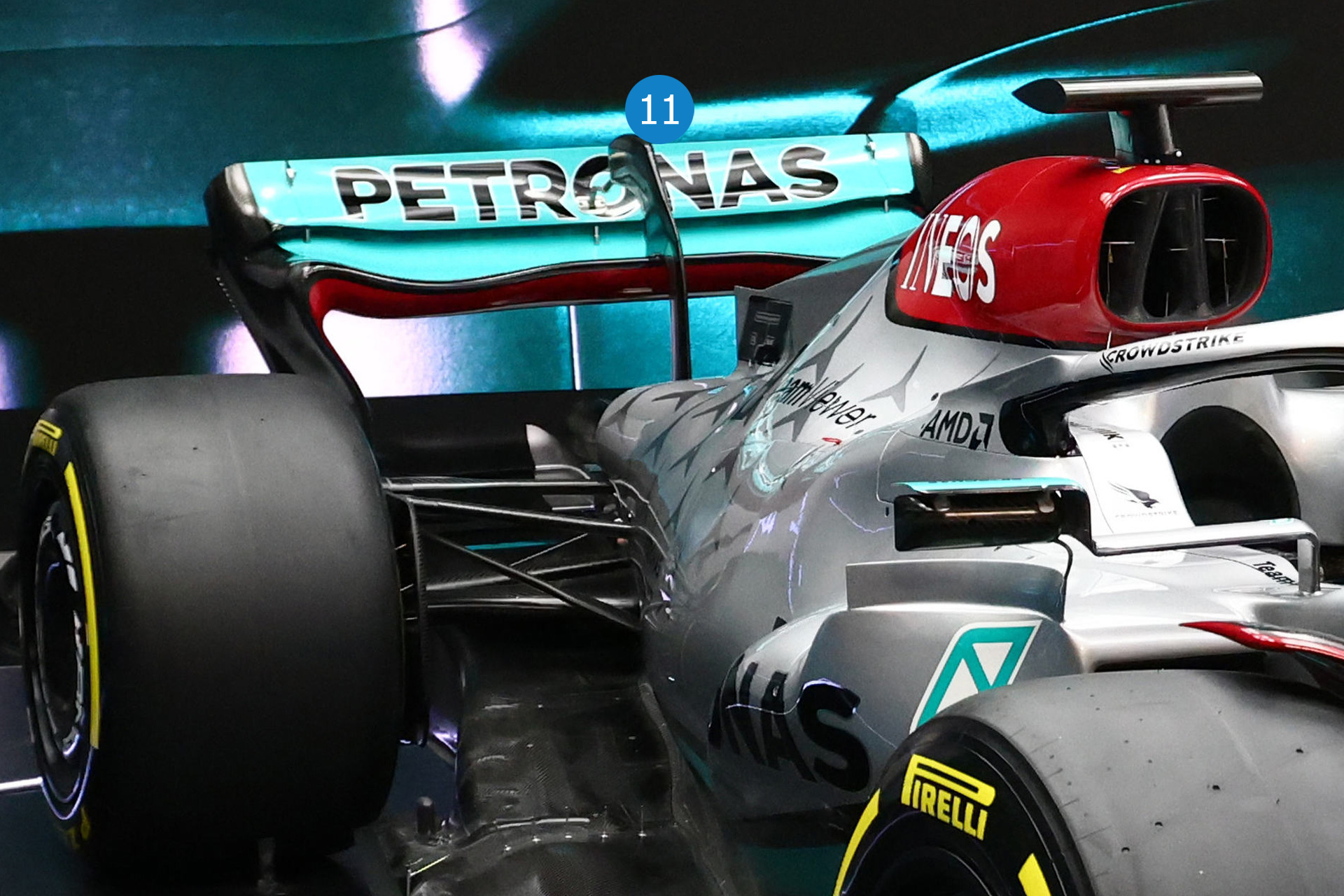 Mercedes indicated they have big plans for developing the W13 over the coming pair of three-day tests. “Because the cars will evolve so much over the test, we won’t know where we are until we get to the first race, but we’ve got that mixture of trepidation, excitement of developing the car and seeing what we have created, and pride about what we have achieved together,” said technology director Mike Elliott.

While Mercedes have taken care to conceal some of the W13’s key areas, the world champions were happy to reveal more of their new car than several of their rivals did. Whether or not that confidence is deserved we’ll start to discover when testing begins.

Alto is a motorsport journalist and graduated from Cranfield University with a MS in Advanced Motorsport Mechatronics. He has previously covered a range of...
Read more about Alto Ono, find all their articles and get in touch with them

17 comments on “Analysis: The technical details Mercedes revealed already on their W13”