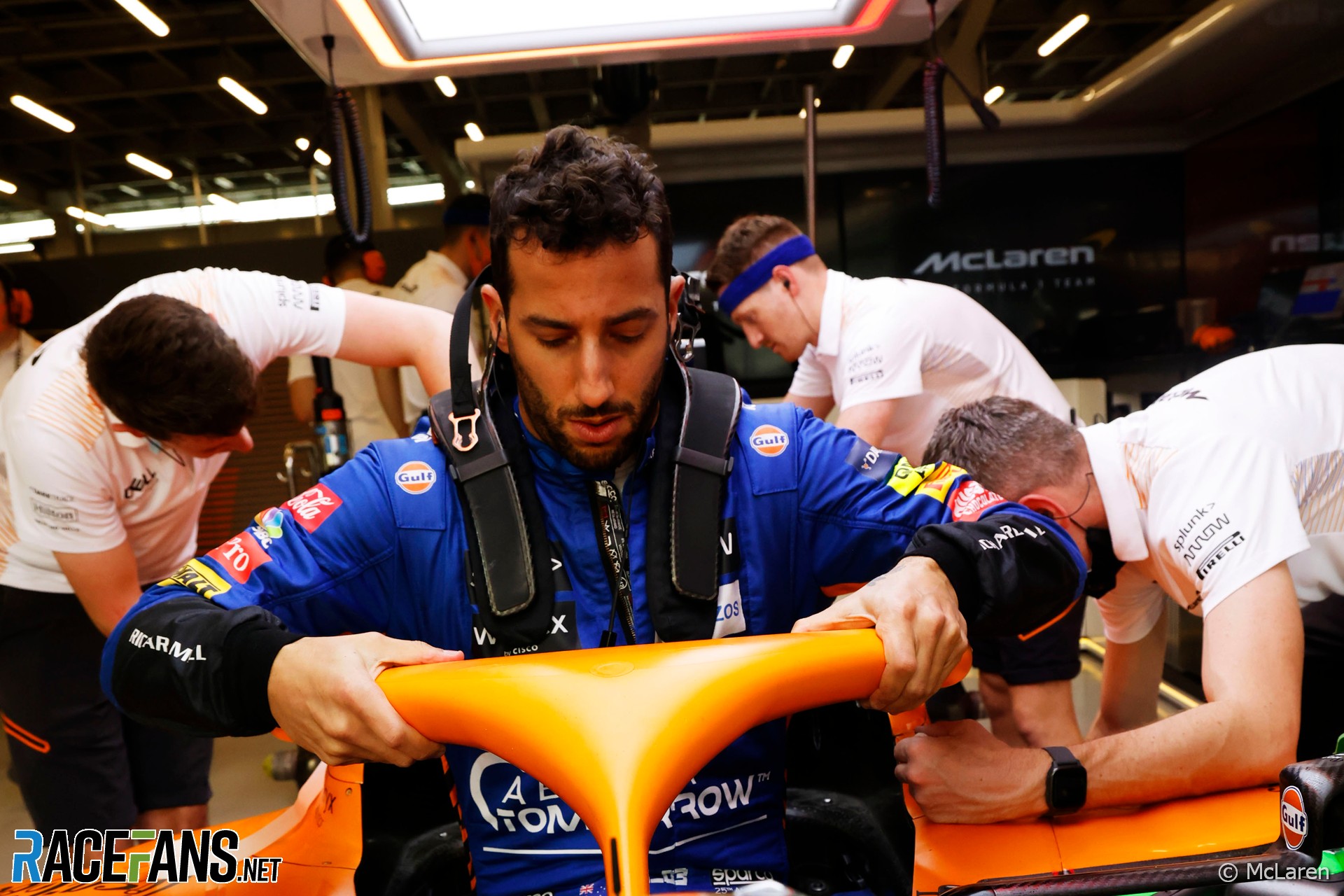 In his ten-and-a-half seasons as a fully-fledged Formula 1 driver, Daniel Ricciardo has racked up eight grand prix victories – despite never once having a championship-winning car at his disposal.

It’s an impressive tally that leaves him behind only Valtteri Bottas as the most successful driver on the grid never to have claimed the ultimate prize of the drivers’ world championship.

So when Ricciardo announced he was leaving Renault at the end of the 2020 season to fill the Carlos Sainz Jnr-shaped gap at Woking, the legion of McLaren fans had every reason to think their beloved team had maintained the previous level of driving talent in the team – and likely upgraded it.

With Sainz and young team mate Lando Norris having delivered McLaren’s highest championship position in eight seasons, McLaren Racing CEO Zak Brown knew that their F1 programme had built up serious momentum heading towards the biggest rules shake-up since the V6 turbo formula began – and that Ricciardo would only bolster it further.

“Signing Daniel is another step forward in our long-term plan and will bring an exciting new dimension to the team, alongside Lando,” Brown said at the time. “This is good news for our team, partners and, of course, our fans.”

It was good news for Ricciardo too. After spending the vast bulk of his career in the Red Bull ecosystem, there was once a time when Ricciardo was the most promising prospect to become Red Bull’s second home-grown champion. That was, until Max Verstappen appeared on the scene.

Ricciardo’s decision to depart Milton Keynes and head an hour up the M40 to Enstone was motivated by many factors, but pursuing a world championship title was always at the core. As much self-belief that Ricciardo may have had that he possessed enough raw driving talent to go toe-to-toe with his sensational young team mate for a title, it became clear to him that Red Bull was not the right environment for him to realise his dreams.

But after just one year in the team, Ricciardo chose not to commit long-term to the Renault project (later renamed Alpine). Instead, McLaren’s resurgence after a major restructuring following the termination of their partnership with Honda meant the Woking team had made them a vastly more attractive prospect in 2020 than when he had first held talks with them in 2018.

With Brown breathing fresh life and energy into the McLaren brand, attracting new commercial interest and opening up more to the team’s passionate fanbase, he had also secured two major hires that would have an almost immediate impact on the team’s trajectory. First, James Key was brought in as technical director with a strong reputation for helping smaller teams overdeliver results. Second, Andreas Seidl was appointed as team principal. With his calm demeanour, laser focus on performance and wealth of championship-winning experience from his time at Porsche’s highly successful LMP1 programme, Seidl slotted perfectly into Brown’s vision to return McLaren back to their past prominence.

These key recruitments made Brown’s second pitch to Ricciardo all the more appealing than the first time around. “At that time I was able to make statements that I had yet to deliver on,” Brown later recalled. “I think 18 months on I was able to demonstrate to him after he met Andreas and was obviously well aware of James and the whole team, I think that went from some statements to factual elements that we could show.”

It was enough for Ricciardo to commit to the McLaren renaissance project for the next three seasons. Now aged 31, Ricciardo knew that he still had time to help build up a team into a title contender before age started to become a concern. But there was also one crucial factor to consider – the opportunity offered by the revolutionary rules changes set to arrive in 2022.

“I certainly feel like McLaren has done the right things, particularly in the last few years to set themselves up, in particular, for these rule changes coming in 2022,” Ricciardo said soon after joining the team. “I think that the next era of F1 has the ability to certainly turn the field around a little bit. Everything I’ve seen and everything I’ve known up until now really excites me about where McLaren is heading.”

Having such a focus on 2022 may have helped to make Ricciardo’s first year with his new team easier to reconcile with, because few could have imagined just how much the Australian would struggle in 2021.

With the impact of the pandemic meaning 2021’s cars were largely carried over from their predecessors, it was not an easy year for Formula 1 drivers to move teams. But while Ricciardo wasn’t the only driver in new surroundings to have his difficulties adapting to new machinery, he was perhaps the most outstanding example of it. With the team’s MCL35M, it was the nuances needed in the braking phase that created the biggest challenge.

“Going from Red Bull to Renault and Renault to McLaren, probably the braking is the biggest thing which it seems like you need to adapt,” Ricciardo explained. “With the braking it’s more probably just a mechanical feeling. I think even things like new cars, new pedals and positioning, it’s probably more just a feel on that physically than anything else for now.”

Ricciardo’s struggles stood in sharp contrast to the successes enjoyed by his team mate Norris. While Ricciardo could only manage a best finish of sixth in the first phase of the season, Norris reached the podium in Imola, Monaco and Austria. Surely not what was expected by the 85% of RaceFans readers who predicted Ricciardo would out-score Norris.

Gradually, Ricciardo became more comfortable with the car. He extracted the maximum from the McLaren at Monza, where he controlled the race from the start to claim an unexpected race victory, his first in a car other than a Red Bull. It demonstrated Ricciardo had lost none of his resilience under pressure nor his ability to capitalise on the hint of an opportunity to win. But it did not hail a dramatic turnaround in performance for the remainder of the season.

While Norris reached the points in all eight rounds after Monza, Ricciardo only managed three more top-10 finishes. McLaren faded to fourth in the championship, increasingly unable to offer a challenge to Ferrari’s improved performance after their rivals introduced a power unit upgrade.

Thus, with McLaren’s MCL36 due to be unveiled to the world this evening, the year ahead may be the most critical yet for Ricciardo and his hopes of one day claiming a world championship title. While the team themselves have played down their chances of becoming a major threat at the very front of the field once again this year, anything other than taking a step closer to the ultimate pace once again this year will likely be a disappointment.

But beyond McLaren’s rivals, the most pressing issue for Ricciardo to face in 2022 is one he is all too familiar with – an impressively quick younger team mate.

Norris had the measure of Ricciardo throughout 2021. With McLaren securing the British driver’s services on the longest contract held by any driver on the grid, Ricciardo knows Norris is the benchmark he will continue to be measured against. Whether or not he left Red Bull to avoid that scenario with Verstappen – as his former team principal Christian Horner suggested – he now has the same situation with Norris.

The good news for Ricciardo is that the all-new cars for 2022 mean he and the other 19 drivers on the grid will start from the same base level of experience this year. But that levelling of the playing field also removes any excuses for those who are regularly shown up by their team mates. Especially for those as experienced, and with such formidable racing resumes, as Ricciardo.

Depending on how the team’s season unfolds and what it could lead to over the years ahead, 2022 could become the pivotal year for McLaren and for Ricciardo as a driver. With Brown firm in his belief that his team possesses the “best driver line-up in the paddock”, he and McLaren’s many fans across the globe will be expecting that talk to be backed up on the track this season.

23 comments on “As McLaren commits to rising star Norris, his team mate needs to bounce back in 2022”