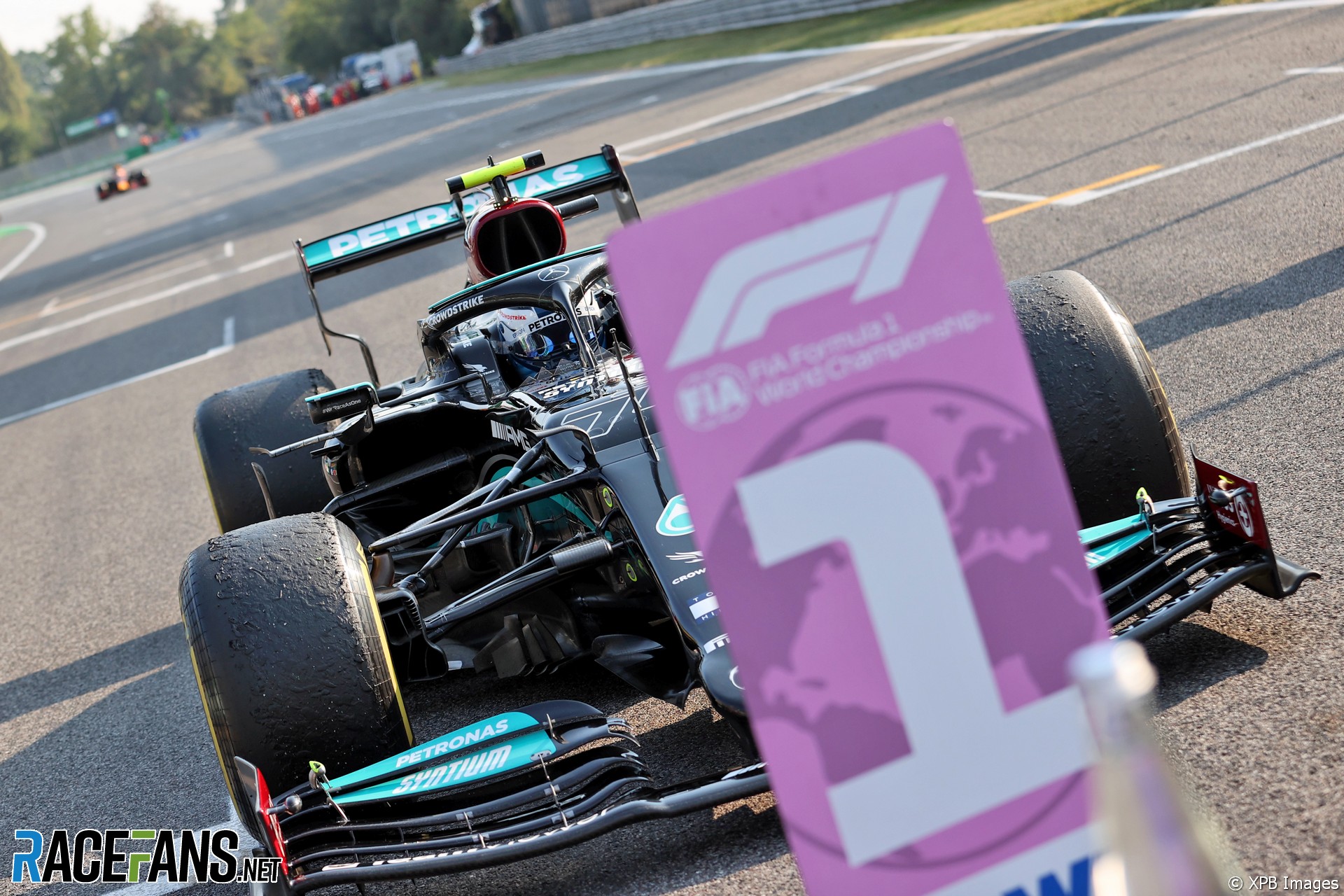 The 2021 Formula 1 season gave us an unforgettable championship fight, a controversial conclusion and many memorable racing moments.

With all that going on, it was easy to overlook some of the strange and surprising stories of the last 12 months.

The Formula 1 season – like many other championships – got off to a delayed start due to the ongoing pandemic. F1’s planned curtain-raiser on the Albert Park circuit in Australia was postponed. Eventually, for the second year running, the Melbourne event was called off completely.

The championship therefore began in Bahrain. The Middle East venue will also hold the first race on the 2022 F1 calendar.

While we waited for the season to begin Formula 1 reprised the Virtual Grand Prix series which began in 2020. The format was revised, with the grid for the main race being set by a short race between Esport Pro Series driver, in what looked like a precursor to the real-world sprint qualifying races held at three rounds of the world championship.

One of the 20 drivers on the F1 grid was not permitted to compete under their nationality during 2021. The World Anti Doping Agency’s sanction against Russia for athletics infringements affects sportspeople in a range of disciplines, including world championship events run by the WADA-affiliated FIA. That meant no national flag for Nikita Mazepin, who officially raced under the acronym ‘RAF’, for the Russian Automobile Federation.

The ban was put in place for two years, so the same will apply to Mazepin and any other Russian driver who competes in the 2022 F1 season. It also prevents the Russian national anthem from being played before their round of the world championship.

Lewis Hamilton didn’t have a deal to drive for Mercedes when the year began. This was quickly taken care of, and soon afterwards another contract for upcoming seasons was inked, allowing him to focus on the championship fight in the meantime.

The upshot was the seven-times world champion had signed twice for Mercedes in the space of less than six months.

Later in the year Mercedes found themselves at the centre of criticism after they signed a new sponsor. Following outcry over their deal with Kingspan, and its connection to the Grenfell fire which claimed the lives of 72 people in 2017 and is still subject to an inquiry, the partnership was swiftly dropped.

Fernando Alonso’s return to Formula 1 after a two-year absence was put in jeopardy when he fractured his jaw when he was involved in a collision with a car while cycling in Switzerland. He had titanium plates fitted in his jaw which remained in place throughout the season.

Once he returned, a bizarre misfortune brought an early end to Alonso’s first F1 race for two years in Bahrain.

Williams’ novel launch for its FW43B did not go to plan. The team intended to use an augmented reality app to present its latest design but pulled it ahead of the launch claiming it had been “hacked”. It seemed some users who downloaded the app discovered images of the car could be easily accessed within the files they had received, casting doubt on whether anything ‘hacking’ had actually taken place.

Four months later the official Formula 1 app also suffered a breach which led to users being sent messages which read “foo” and “Hmmmm, I should check my security.. :)”. F1 later said it did not believe any users’ data had been leaked.

The appalling crash Romain Grosjean suffered during the 2020 Bahrain Grand Prix, which he escaped from with burns to his hands, yielded many useful pointer for the FIA to improve safety in F1 and other series.

F1’s move into Qatar and Saudi Arabia prompted further objections over its decision to hold races in venues with poor human rights records. Hamilton was the most vocal driver on the subject and did not confine his comments to F1’s new events.

In Hungary, Vettel was among three drivers who received a reprimand for wearing their T-shirts from the pre-race ‘We Race As One’ ceremony during the subsequent performance of the national anthem. In Vettel’s case, it was a shirt showing his support for LGBTQ+ rights which he chose to wear in response to the government’s recently-introduced legislation banning the teaching of gay issues to those under 18.

While his reprimand had no connection to his chosen cause, as for all three drivers it moved him a step closer to a potential penalty.

After the third series of Netflix’s Drive to Survive launch, team bosses played down concerns the series took too many liberties with the truth. Max Verstappen didn’t agree go, confirming later in the year he had ceased to participate in the series since its first season because he believed they had faked too much. He wasn’t the only driver who suggested the series was exaggerating rivalries.

Rules changes have an impact

The 2021 season was the first year of F1’s budget cap. F1’s top teams had to cut back, which meant cutting staff for some.

Changes to the aerodynamic regulations imposed to cut cornering speeds in 2021 were widely credited for closing the field up and trimming the advantage of the previously dominant Mercedes team. Aston Martin also suffered from the revision, and insisted other ways of slowing the cars without disadvantaging them were overlooked.

There was ill luck for Bottas in the first race of the year as well. An 11-second pit stop was bad enough, but in Monaco his race ended in the pits as his team were unable to remove a wheel from his car. It was eventually cut away when the car was taken back to the team’s factory.

Daniel Ricciardo, who criticised the coverage of Grosjean’s Bahrain 2020 crash, renewed his complaints after seeing some of F1’s social media output. He later apologised for describing the producers of F1’s crash compilation videos as “fucking idiots”:

Mercedes team principal Toto Wolff was highly unimpressed the team’s junior driver, Williams racer George Russell, collided with Bottas at Imola, taking both out. Russell clearly took his future boss’s words onboard, and later in the season was confirmed as Hamilton’s new team mate for next year. Clearly, he was already treating him like one beforehand.

Following the sale of Codemasters to EA, players of the official Formula 1 game saw steep price rises in some regions, due to a change in pricing policy. The absence of some new circuits from the same, a few of which were added later, didn’t help impressions of the newest edition of the franchise.

During 2021 communications between FIA F1 race director Michael Masi and team personnel were broadcast during television feeds for the first time. Among the first to be played was Wolff urging Masi to show blue flags to Mazepin as Hamilton caught him in Spain.

At the time Masi described such communications from Wolff as uncommon. But come the end of the year he would get another earful from the Mercedes team boss.

Following the crash between Hamilton and Verstappen at Silverstone, Wolff took the matter up with the stewards, a move his opposite number at Red Bull – Christian Horner – did not appreciate. However race director Masi said he wasn’t concerned about either speaking to the stewards during races.

Show us the other Aston…

One of the few moments of wheel-to-wheel action during the typically processional Monaco Grand Prix was missed because the television director chose to cut away to an action replay of Lance Stroll. Sebastian Vettel explained what the viewers didn’t see as he and Pierre Gasly went side-by-side up Massenet.

Relations deteriorated between Haas’s two rookie drivers during 2021, particularly when Mazepin swerved towards Mick Schumacher as his team mate overtook him on the way to the finishing line.

Verstappen celebrated his Styrian Grand Prix victory by stopping briefly and performing a burn-out. The FIA were not impressed by the potential hazard this created, and warned it will not be allowed in future.

Following that, Alonso weighed in on the fight between the championship contenders, suggesting Verstappen would face a tougher time from some because of their nationalities.

Over half the F1 field was placed under investigation following the end of the second race at the Red Bull Ring. In the end Kimi Raikkonen, Nicholas Latifi and Mazepin were penalised for failing to slow for yellow flags, the rest of the 11 drivers cleared.

Two for the record books

The collision between Verstappen and Hamilton on the first lap of the British Grand Prix, which put the Red Bull driver out, created a unique situation. Verstappen, who had won Saturday’s sprint qualifying race, therefore left Silverstone having scored three points despite not completing a lap of the grand prix – a first.

Esteban Ocon scored a shock, breakthrough victory in the Hungarian Grand Prix. Remarkably, he was the third driver to score their first grand prix victory in less than 12 months.

The Belgian Grand Prix was a low point of the season, as race control were forced to abandoned proceedings due to heavy rain. Spectators stood in soaking conditions for hours without seeing a single lap of competitive action, just three slow tours behind the Safety Car.

Hamilton later made what he called a “small token” of respect to the fans by sending team products to those who showed they had tickets to the race. “Everyone sent in their requests and their tickets and [we] provided them with merchandise,” he said.

He met a fan in New York who had attended the race. “She said that her and her son drove all the way from Geneva, so that’s eight or 11 hours’ drive, and sat in there and in the rain. And she said she was grateful that I had mentioned something because she said it’s pretty brutal to sit there in the rain and not actually see a race.”

The race promoters also offered fans F1 TV passes and a prize draw to win tickets to the 2022 race.

Valtteri Bottas stormed to pole position for the sprint qualifying race at Monza despite hitting a squirrel on his out-lap. Unfortunately it wasn’t the only encounter between wildlife and the cars that weekend – Verstappen hit another squirrel during the race as well. Nicholas Latifi was at least able to dodge a hare during practice.

The controversial decision by FIA race director Michael Masi, which played a pivotal role in the outcome of the world championship, is not a story which is likely to be forgotten any time soon. But the stunned reaction of drivers not involved in the title fight, many of which were also affected by the unprecedented decision to only allow a portion of the field to un-lap themselves ahead of the final lap, was somewhat overlooked in the drama of the contentious title-decider.

The new technical regulations for 2022 were tweaked in various respects during the year. The most noticeable change has been a gradual rise in the minimum weight limit, which is now just 5kg short of the 800kg threshold.