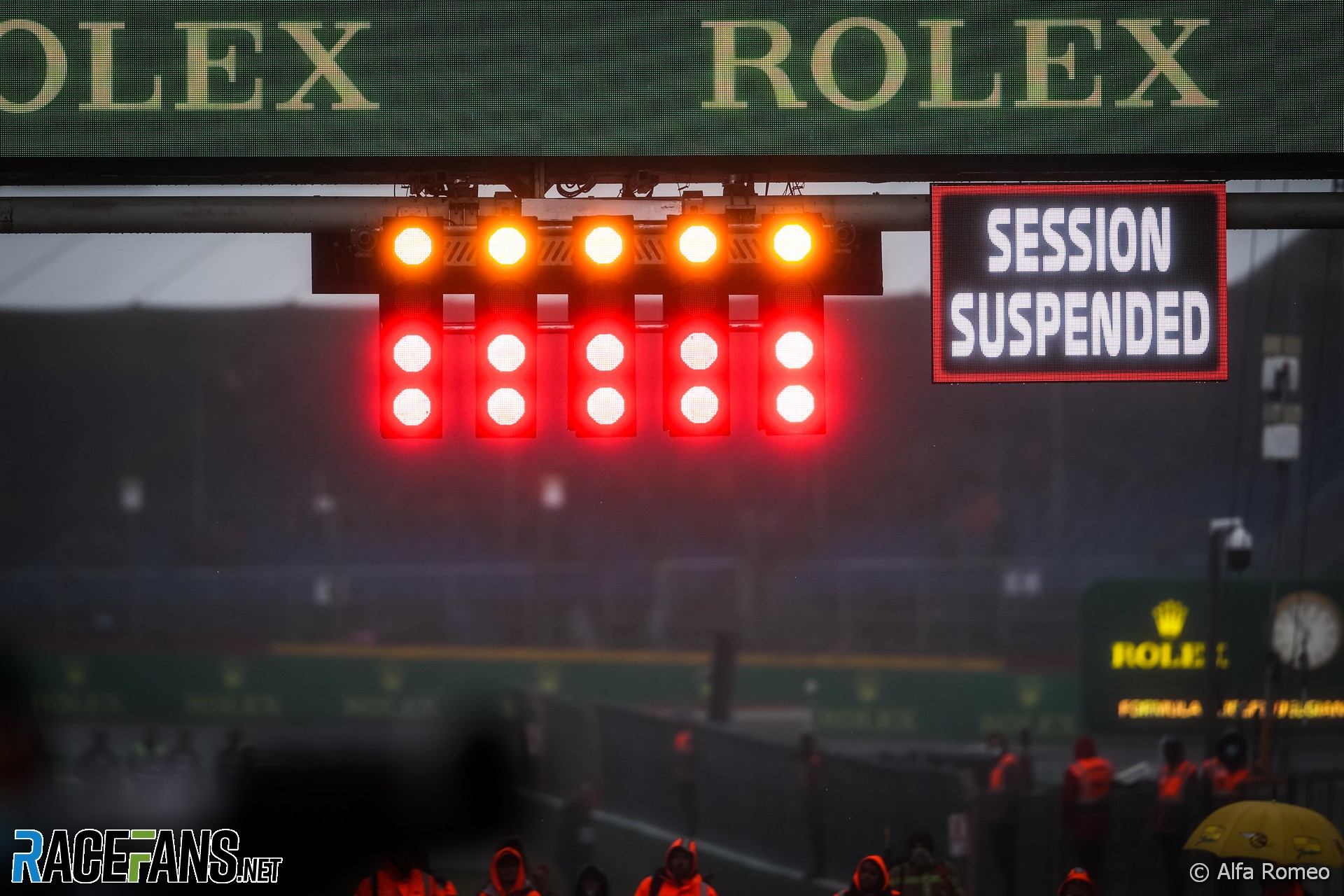 The first ever 22-race Formula 1 season will live long in the memory, but not all for the right reasons.

Over the year, fans were treated to some of the hardest, most intense wheel-to-wheel racing seen for many seasons. A highly competitive year that saw more individual grand prix winners than any other season in the V6 turbo era and over half the grid stepping on the podium at least once during the championship.

However, where there was competition, there was also controversy. From the sorriest excuse for a ‘race’ in the sport’s history in Belgium to a tainted season finale, there were also plenty of moments in 2021 that F1 should not be proud of.

The realisation dawned slowly. There were only three days of testing, but it was enough to discern that all was not well with the world champions. They completed the fewest laps of any team, which was unheard of, and the drivers were clearly grappling with major handling imbalances.

To those not paying attention, Lewis Hamilton’s season-opening victory was more of the same, and proof of Mercedes’ ‘sandbagging’. Four races in, Hamilton had won three of them. Business as usual for Mercedes?

It turned out to be nothing of the sort. Red Bull dug in, and only a tyre failure in Azerbaijan prevented Max Verstappen from reeling off five consecutive wins at mid-season. Now everyone could see Mercedes really were up against it and so it proved to be over the rest of the season, coming down to a showdown in the 22nd and final race of the year.

The midfielders join the fight

It wasn’t just Red Bull who got in on the action after a year of Mercedes dominance. The midfield was tighter and closer than before, and when the stars aligned they punched through.

McLaren were regularly among the front runners in the first half of the season, Lando Norris regularly threatening to cause an upset. Ferrari caused a stir with pole position in Monaco – where Charles Leclerc lost a clear opportunity to win – before following up with a repeat performance the following round in Azerbaijan.

So it was something of a surprise when the first team outside of the ‘big two’ to score a race victory was neither of these but Alpine. Granted, it took Valtteri Bottas and Lance Stroll playing skittles at turn one in Hungary to bring it about. But Esteban Ocon showed great coolness under pressure, and overcame significant adversity to gain and retain his place in F1, and this was his day of days.

The next month, McLaren ended their nine-year wait for a grand prix victory, courtesy of not Norris but an inspired Daniel Ricciardo. And, as the season drew to a close, AlphaTauri were increasingly troubling the front-runners in qualifying, Pierre Gasly claiming a front row spot in Qatar.

The return of fans

The second year since the Covid-19 pandemic gripped the world wasn’t yet a return to normal, but as vaccinations liberated fans from their homes, race attendance became a reality once again. Some tracks were even able to welcome capacity crowds, notably at Silverstone.

Verstappen’s home fans were also present as well, and in fantastic voice as he delivered the first ever win for a Dutch driver in the Netherlands. Such was the atmosphere it was easy to forget only two-thirds of the seats were filled due to Covid restrictions – expect an even more raucous atmosphere when a capacity crowd welcomes their world champion home next year.

A strong crowd greeted the world championship at the Circuit of the Americas as well, and not just on race day, but throughout the event. This looked like more than just a bumper post-Covid attendance, but a sign the sport truly is beginning to gain traction in its most coveted market.

Liberty Media’s promotional efforts, not least three years of Netflix’s hugely popular ‘Drive to Survive’ series, were widely credited with the rising interest in F1 in the USA. Soon after the Austin race weekend, tickets were quickly snapped up for America’s second grand prix on the 2022 F1 calendar, to be held in Miami. The signs are encouraging.

A revealing innovation on the broadcasting side eventually featured heavily in the controversial conclusion to the season. But there was a lot to be said for revealing the chatter between the teams and FIA F1 race director Michael Masi, not least that it shed light on conversations with team principals that probably shouldn’t be happening.

In a broadcasting masterstroke, F1 ensured the championship-deciding final race would air live and for free in the home countries of the two protagonists, maximising the potential audience. Channel 4 took up Sky’s live coverage in the UK, adopting a model it previously used for other sports, while Ziggosport made its subscription coverage available for free.

The subsequent viewing figures were impressive Whether those who tuned in were impressed by what they saw is another matter.

Goodbye to the old cars

F1’s decision to loosen aerodynamic regulations in 2017 produced a generation of machines capable of spectacular performance. But the way in which they went about it did nothing for the quality of racing – instead, quite the opposite.

In their place, a meticulously-researched new set of regulations will arrive next season, one year later than originally planned due to the pandemic. These promise comparable levels of performance while allowing cars to follow more closely and therefore make closer racing an more realistic prospect.

Whether or not they will succeed remains to be seen, but the necessity of addressing the difficulty of racing with the current cars is hard to argue against.

The biggest disappointments of 2021

Sadly the pandemic meant Formula 1 fans in some countries had to go another year without the championship coming to them.

Australian fans saw their event postponed from one end of the season to the next, then scrapped. The Canadian and Singaporean rounds were scrapped too. The loss of the Japanese round was felt especially keenly, as it meant no farewell home race for Honda. The special livery Red Bull produced to mark the occasion turned up at the Turkish round instead.

Those in China face the longest wait for their next dose of F1, as they won’t have a race in 2022 either.

Disappointing though it was to lose all those races, F1 did a superb job to keep its show going once again. All bar one of its planned 23 rounds were held, and it only doubled up at the same track once. The on-site staff who withstood the punishing schedule, including repeated ‘triple-header’ rounds, deserve nothing but praise.

Unexpected tyre failures marred the races in Azerbaijan and Qatar for several drivers, most dramatically for Verstappen when he was seemingly on his way to victory in Baku. That and Lance Stroll’s own tyre failure in the same race prompted detailed changes to Formula 1’s tyre usage rules.

Nonetheless further problems arose in Qatar. Will F1’s move to 18-inch tyres next year, and the arrival of standardised tyre sensors, finally bring an end to these failures?

F1’s decision to dabble with Saturday sprint races – which is what they were, even if F1 couldn’t bring itself to call them that – was only a disappointment to those who fell for the ludicrous hype heaped upon them from the outset.

For the rest, they were largely as processional as expected, and served only to vex the statisticians as we now had pole position being determined by something other than a qualifying position, and extra points being given before race day.

In its defence, holding a competitive session on each day of the weekend undoubtedly commanded more attention. But retaining that benefit while fixing everything else which is wrong with the deeply flawed format will be a significant challenge for the 2022 rule makers, especially as they’ve already decided to hold twice as many next year.

Points for a procession at Spa

Of all the difficult decisions race control had to take during 2021, abandoning the Belgian Grand Prix before any competitive action had taken place on Sunday was among the toughest, yet clearly correct. In unrelenting heavy rain, visibility never got close to being good enough for a race to take place.

But the decision to hand out (half) points on the basis of a single lap of running behind the Safety Car was rightly criticised, including by some of the drivers who had added to their scores that day. Nor did the limited offer of compensation to fans who stood in the rain for hours and saw no racing reflect well on a championship which generates F1’s revenues.

The 2021 Formula 2 season was a weirdly mis-shapen affair. Its eight rounds were scattered unevenly over the year, with huge gaps between consecutive rounds, and used a triple-header format heavy on the reverse-grid gimmickry which has already been canned for next season.

Oscar Piastri quickly emerged as the class of the field and looked a strong candidate for the championship from an early stage. But even as he closed on his third title in as many seasons, it was obvious to see that he wasn’t going to get an F1 seat in 2022.

While it isn’t the case that every F2 champion deserves to walk into an F1 seat, Piastri’s outstanding success made the lack of opportunities available to him with Alpine all the more conspicuous. The fact he won’t be racing anything next year as he waits for an F1 promotion which may not come is doubly dissatisfying.

For the first time in five years F1 finally had a championship go down to the final race. Not only that, but Hamilton and Verstappen had contrived to arrive at the final race level on points. The close contest hinted at in the opening rounds had delivered in a way the sport’s promoters could hardly have dared dream possible.

But with the eyes of the world upon it, F1 brought a controversy upon itself which soured the outcome of the season and left the destiny of the world championship in doubt for days as one side considered an appeal.

The unprecedented decision to hurriedly restart the race on the final lap having allowed just enough cars to unlap themselves to give Verstappen a clear shot at Hamilton drew gasps of disbelief. From that point the outcome was predictable enough it may as well have been scripted. For many, this was the moment F1 decided it would rather be a show than a sport.