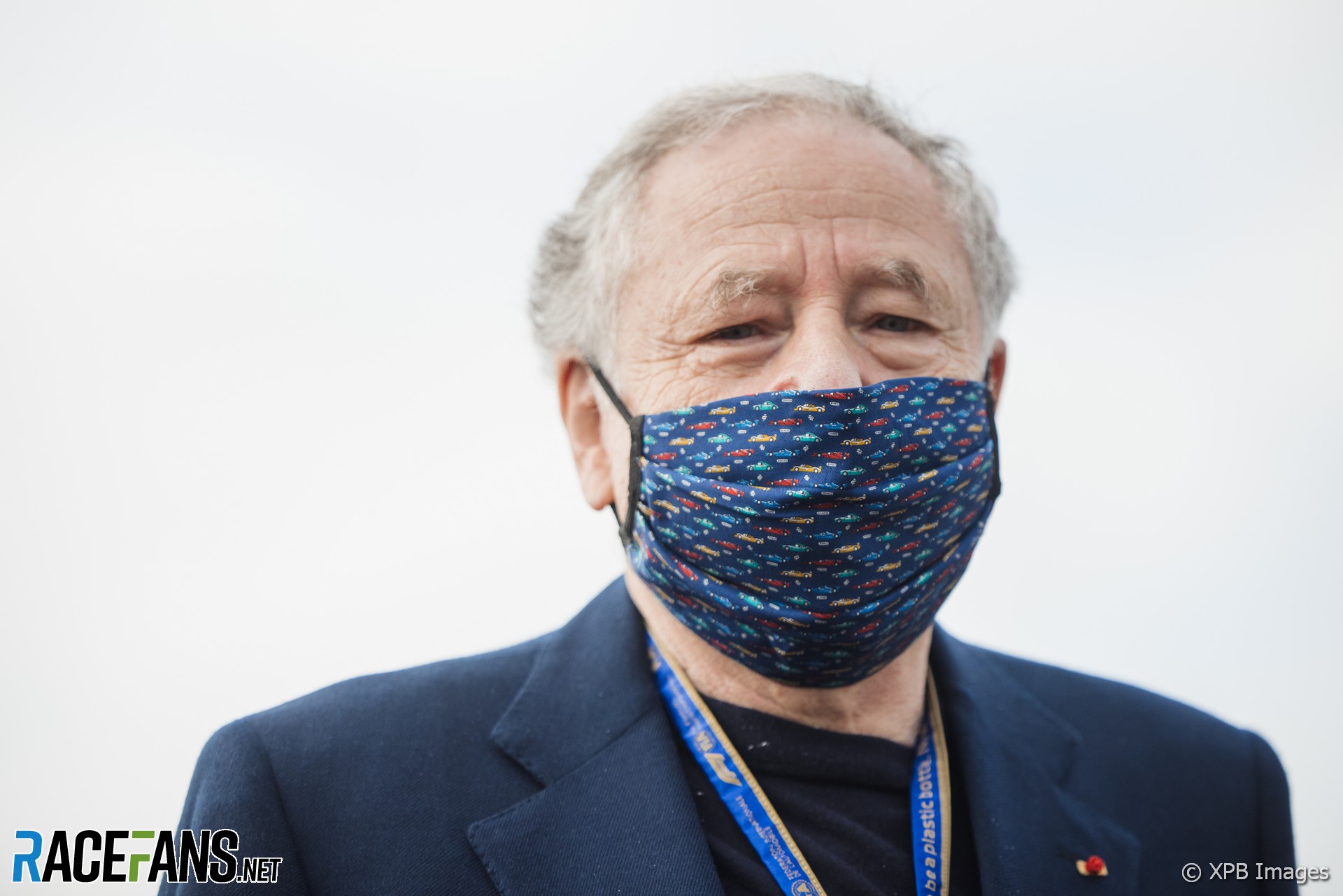 I was incredibly disappointed when Todt – better known for having masterminded Ferrari’s 2000s hegemony – won, by a considerable margin, on what was my 56th birthday.

Todt was overtly supported by Mosley who not only campaigned against Vatanen – likely afraid of what he might unearth – but suggested “Jean will continue my good work”, a horrific thought to any straight-thinking motorsport fan. Forget Mosley’s unconventional private life; here was the man behind such lamentable rules changes as the switch from 3.0 V10s to 2.4 V8s ‘on safety grounds’ and the introduction of grooved ‘slick’ tyres.

Still, Todt won squarely, and I gave him a year to prove himself, to turn around the presidency after the endless scandals of the Mosley years. In October 2010 I set about writing a review of Todt’s first year in office, in truth setting out to nail him. But no matter how hard I tried or how deep I dug I could not, in all fairness, find any substantial fault. If anything, the opposite – for he had distanced himself from Mosley, albeit stealthily.

Indeed, whoever I spoke to – including Ari and several of Todt’s erstwhile critics – openly admitted he had done a sterling job during his first year in office, having largely stabilised and unified what had been a rather fractured organisation under Mosley. Saliently, he had not victimised those who stood against him, with many becoming office bearers in his administration; equally, Mosley had become openly critical of Todt.

Indeed, in 2013 one of Mosley’s former lieutenants, David Ward, staged an early challenge ahead of the 2013 elections but was soon seen off, and thereafter Mosley withdrew from FIA activities to concentrate on his media privacy campaigning, not even exercising his seat by right (at the time) on the FIA Senate.

When Todt won the presidency in 2009 there was no Formula E (at the time Tesla produced only funky Lotus-based sports cars with limited range, ‘hybrid’ was a logo stuck on the back of strange-looking Tokyo taxis and halos were only seen on Christmas cards – now that controversial device has saved the life of at least one driver – and potentially as many as six in just four years. WRX did not exist, nor did a Women in Motorsport movement, nor a Disability and Accessibility commission.

Todt won uncontested 2013 and 2017 presidential elections and has now reached the limit on terms and age – three and 75 at date of election respectively. Two challengers for the presidency have thrown their hats into the ring – Graham Stoker, profiled here, and Mohammed bin Sulayem, to be profiled next week – with the election scheduled for 17 December in Paris.

Thus, in a fortnight the Todt era closes, ending concurrently – and rather fittingly – with the demise of the current F1 regulations and the 13-inch tyres that served F1 so well for 30 years. As he walks out of 8 place de la Concorde, 75008 Paris for the last time Todt can look back on a solid record of achievement, as he could when he exited Peugeot in 1993 and Ferrari in 2008.

For starters he grew the FIA substantially, financing expansion primarily via shrewd negotiations with F1’s succession of commercial rights holders, CVC Capital Partners and Liberty Media, plus though the periodic (re)awarding of commercial rights to WEC, WRC and WRX. Todt’s creation of Formula E generated further rights income, while a newly-formed marketing department licences approved safety equipment – for a fee.

The net effect is that during Todt’s three terms the FIA grew from 228 member organisations to 245 – in what is essentially a ‘captive’ market – with, crucially, the biggest growth factor occurring at ASN (national sporting club) level, which went from 55 to 71. ACNs (combined sport and mobility clubs) grew from 73 to 75.

In the process staff levels more than doubled from 90 in December 2009 to 222 (representing 21 nationalities), with the sporting department almost tripling in size (45 to 122) and administration growing from 38 to 83. To illustrate how Todt restructured the FIA along business lines: When he was elected the FIA did not have a human resources department; in 2011 the first HR officer was appointed and today the department numbers five heads.

This increased funding was not, though, allocated only internally. Using some of the money received from the various deals and sale of F1 stock the FIA has funded motorsport safety and development projects – as well as mobility activities that do not directly concern our readership – across the globe, with over 130 countries benefitting via 230 grants totalling £20m. Two-thirds of that was spend on motorsport development.

The FIA’s most visible championship – and biggest money-spinner – is Formula 1 and during Todt’s watch the sport has changed massively, predominantly for the better. For example, in 2010 a driver steward was added to the panel, while in 2013 more stringent crash tests were mandated, with halo following five years later despite massive internal and external opposition from various quarters.

Among its detractors was Romain Grosjean. “I wasn’t for the halo some years ago, but I think it’s the greatest thing we’ve brought to Formula 1 and without it, I wouldn’t be able to speak to you today,” he said from hospital after suffering a fiery 240kph crash in Bahrain one year ago. The Haas driver had previously said the device, saying “has no place in Formula 1…”

Although the basic framework for the current F1 hybrid engines, which will see service through to the end of 2025, was devised under Mosley, the original four-cylinder concept was dumped in 2011 in favour of V6 internal combustion engines which boast thermal efficiencies of over 50% – unheard of levels just ten years ago. Last year the FIA supplied F1 engine manufacturers with batches of experimental synthetic fuel – the next big thing.

Formula E was not only created under Todt’s watch but has undergone massive changes since its introduction in 2014. The first cars had 150kW and a 0-100kph/time of three seconds, with two cars required per driver, so modest was battery capacity. The 2022 ‘Gen3’ cars will have more than double the energy regenerating capability of their predecessors and feature fast-charging. All this technology is road-car relevant, hence the category attracted support from 10 manufacturers.

Nor is electric racing the only alternative energy category: In 2020 a ‘H2’ clause was validated by the FIA World Motorsport Commission to provide clear guidance for hydrogen-powered propulsion. Earlier this year Toyota entered a Corolla equipped with a developmental hydrogen-powered engine in select rounds of Japan’s 2021 Super Taikyu endurance racing series to prove the technology, and will contest further events next year.

In early 2020 the FIA signed up to the UN Sports for Climate Action Framework and within 12 months had instituted a strategy to accelerate ‘net zero’ transformation, to foster sustainable innovations that can be transferred from sport to mobility, and to reduce the impact of events. To date 14 ASN and various circuits, promoters and event organisers and teams have signed up to FIA initiatives.

Prior to 2009 the route from karting to F1 was a maze with many potential wrong slots, but a single-seater staircase was created by commission president Stefano Domenicali – one of Todt’s Ferrari lieutenants, and now F1 CEO – with similar ladders gradually falling into place for off-road/rally, endurance, and touring cars. True, there are still too many junior series, but streamlining is in place so the situation can only improve.

No self-respecting global sport would not boast a Wall of Fame celebrating its greatest exponents, yet, astonishingly, until 2017 no such platform existed. The first, for F1 champions, was officially opened in December of that year in Paris, and later also in at the FIA’s Geneva base. Rally and endurance champions were inducted in 2019. The platforms are also accessible online.

The above is but a snapshot of how the FIA evolved during Todt’s presidency and does not imply in any way suggests that Todt instituted it all. The fact is, though, that just as at Peugeot and Ferrari he recruited the right people – having found money to hire them – then tasked them to build a better FIA.

A measure of his standing is that during the FIA Conference in July not a single delegate spoke out against him despite having the freedom to do so given he is leaving. Last week I exclusively interviewed Todt for this feature, opening by asking what he considers to be his greatest achievement during the past dozen years.

He gently admonished me for asking what he considers to be “a bad question” before saying, “I will never criticise my predecessor, saying we did better, we did worse, but let’s say that with my team we left a mark on a big organisation.”

Todt explains he “created alliances with bigger organisations in the world, with IOC, with FIFA with UEFA, with the athletic federation” during his time in office. “I am now a special envoy [on road safety] to the Secretary General of the UN.”

“Whatever I have been doing in my life, whatever I will do, if I’m committed then I am a detail maniac on everything. And I try to be as straightforward, loyal, reliable. I was ambitious to do what I needed to do. I leave behind a healthy structured organisation.”

I put to him that he is, though, too much of a petrolhead to not at least follow F1 after he leaves office. He allows a brief smile. “For as long as I will be in this world, I will be watching Formula 1 and following motor racing. Saudi Arabia marked his final grand prix in an official capacity – in keeping with his modus operandi of attending all new events, be they F1, rally or WEC.

He will therefore not be in Abu Dhabi for the last grand prix under his presidency. Will he, though, continue playing an active FIA role after December 17th, such as a senate role?

“I changed the status of that, this position is not appearing [in the FIA statutes] anymore,” he says somewhat flatly. That’s a “no”, then.

He will, though, continue with his other interests, such as UN road safety work and with the Parisian spinal institute he founded but would not be drawn on whom – if either of the candidates – he supports in the presidential race, saying only, “Please understand in my position I cannot comment.” Most unlike Mosley, then…

In Saudi Arabia the word was that the elections are too close to call, that voting could go either way, but one thing is certain: Having inherited a low bar from Mosley, Todt successively (and successfully) inched it up during each year of his presidency, so much so that the successful candidate will be wise to take a course in pole vaulting before officially taking office. A succession of Ferrari team principals soon discovered that.

Todt presided over a period of enormous change for the automobile in all its forms – who would, for example, believe that the FIA would institute e-sports or involve itself in electrification, hydrogen storage or autonomous driving? The incoming FIA president has the advantage that he takes over a stable and well-funded organisation, one that requires only consolidation rather than restructuring.

“I will say something which is very personal,” he says in closing: “I put my heart [into the FIA] for more than 12 years to try to achieve as much as we could. On the 17th of December in the afternoon, I will disappear from FIA.

“I don’t intend to be some kind of hidden voice or something like that. I will leave and I will concentrate on my [other] engagements, but not on that. I will say for the administration of the FIA, for the members of the FIA I wish them the best, but I will not be able to be an influencer on that because my time will be over.”