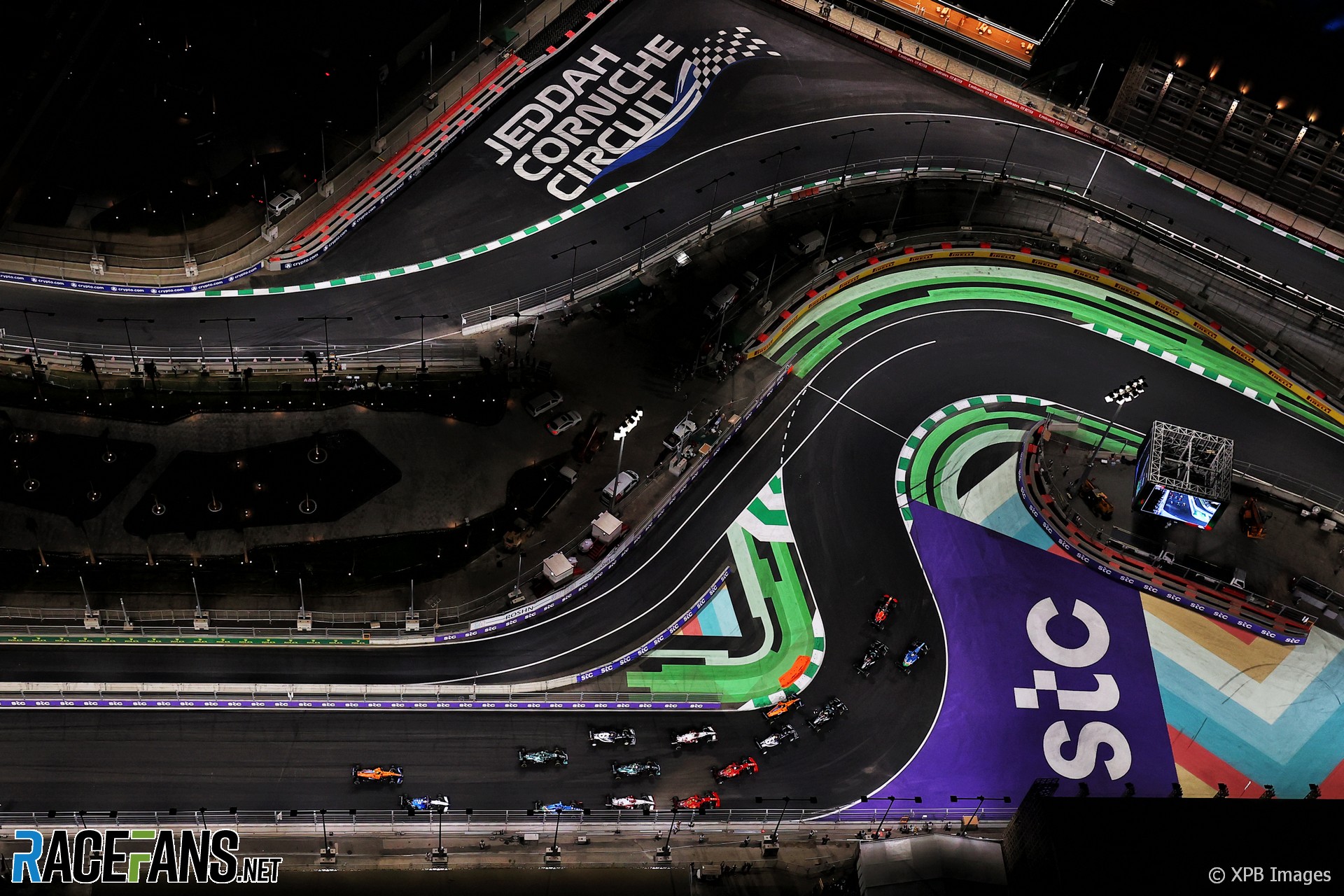 Formula 1 drivers want changes to the Jeddah Corniche Circuit to lessen its dangers after the first race weekend on the track was marred by incidents.

The support races were also disrupted. Sunday’s Formula 2 feature race was cut from 28 laps to five after it was delayed due to barrier repairs and also stopped twice. The first stoppage occured on the first lap after a violent crash which left one driver in intensive care.

Both series are due to return to the track in March for the 2022 Saudi Arabian Grand Prix weekend.

While F1 drivers largely praised the fast layout, the potential for crashes was a talking point throughout the weekend. Before the race Sergio Perez said he feared a “big shunt” would take place. In the race he was one of three drivers eliminated in the crash which caused the grand prix to be stopped for a second time.

After the chequered flag fell several drivers agreed more could be done to make the track safer to race on, particularly around its many high-speed blind corners. Their concerns focused on the limited visibility in places and lack of run-off area.

“With the red flags, it’s because there’s no room,” said four-time world champion Sebastian Vettel. “It’s an exciting track because there’s high speed corners. But I think we largely rely on the skills that we have, and also luck, if things go wrong.

“It doesn’t take much, you know. You can’t see nothing when you go around, and there were some close calls.

“I think Suzuka is an amazing track, but you wouldn’t do Suzuka with walls. And that’s what they’ve done, more or less, here. So it’s challenging but pointless to be so blind for so long.”

Nikita Mazepin was unable to avoid George Russell when several drivers swerved to avoid Perez’s crash. The Williams climbed on top of the Haas’s halo in the collision.

Carlos Sainz Jnr attributed the carnage to the nature of the circuit. “They were very clear examples of what drivers we’ve been saying all weekend,” the Ferrari driver said. “We’ve seen it with Mazepin. This is exactly what this track kind of generates.

“There’s basically no space to go to avoid an accident, no visibility and Nikita couldn’t avoid a crash in front of him, which is what we’ve been saying since we arrived here on Thursday. So there’s some things to learn, analyse and see for March if we can make everything a bit easier.”

“It’s, of course, challenging, and in some places it can be dangerous,” he said. “It would be good to re-look a little bit some parts of the track to make it a bit safer.”

Pierre Gasly admitted the race had played out “worse” than his expectations going into the event. “I didn’t expect such a thing, and even at some point I started to think like, ‘okay, we’re going to do like half of the race under VSC or full Safety Car if it keeps going like this.'”

The AlphaTauri driver wants the track operators to “open the corners so we have a bit more visibility a bit further ahead, because even during the formation lap or if we have a Safety Car, when you start pushing you arrive at such high speed.

“[If] the guy behind decided to brake or slow down there, the speed difference is very, very high. So if they can increase the visibility, I think that will just make it a lot safer for all of us.”

McLaren team principal Andreas Seidl acknowledged the concerns expressed by some drivers over the weekend, including his own, but believes the risks posed by the track are “manageable”.

“It is clear that with the characteristics this track has, which is in one [way] very exciting, when you listen to the drivers, when they drive the first laps here, it is clear that a certain amount of risk is involved as well with the walls being so close and with the track layout how it is here,” Seidl said. “I still think it’s a risk that is manageable, to be honest,” he added.