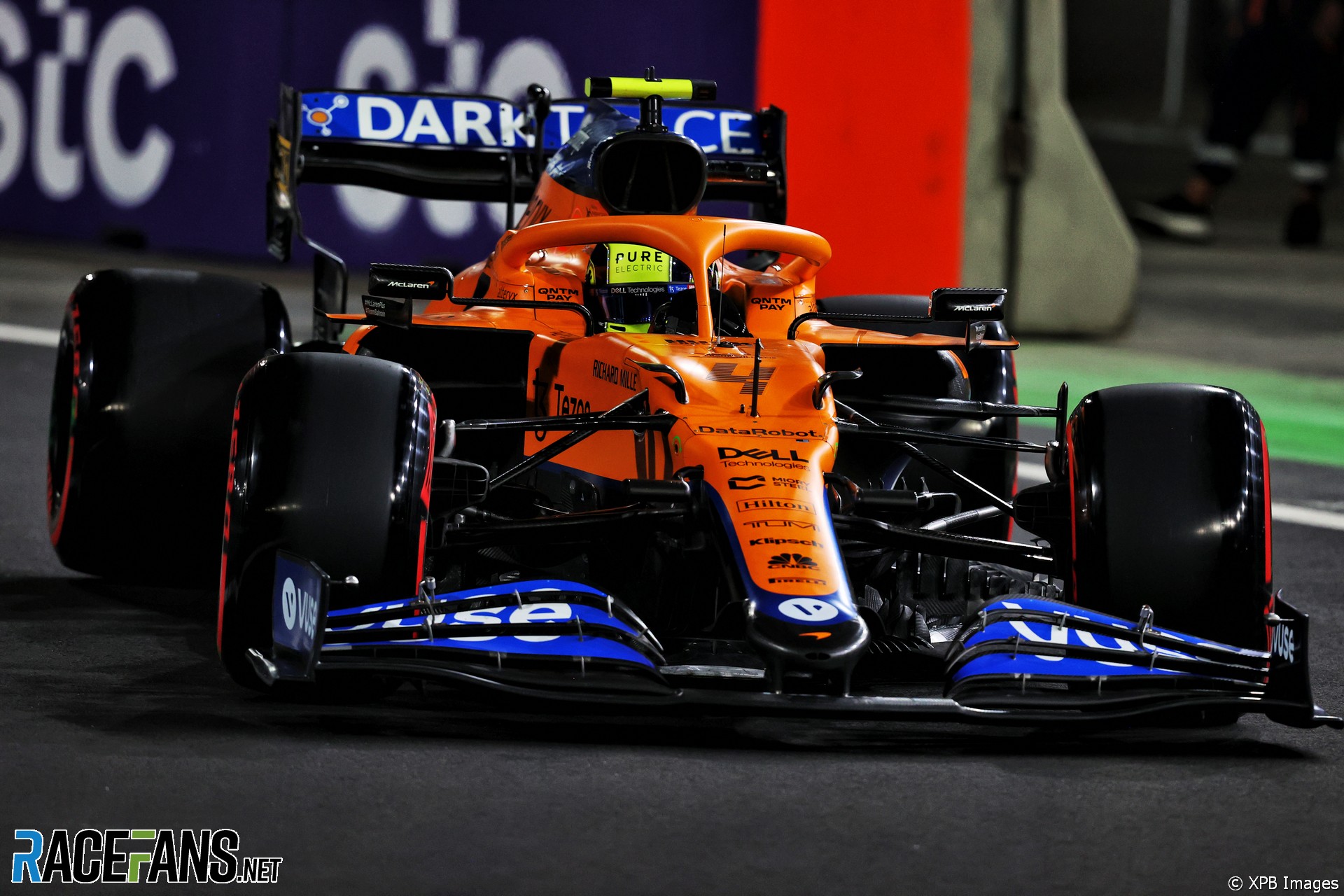 Lando Norris criticised a quirk of Formula 1’s rules which allows drivers to fulfil their obligation to make a mandatory pit stop during a red flag period after he finished 10th in the Saudi Arabian Grand Prix.

The McLaren driver seized the opportunity to change tyres when the Safety Car was summoned on lap 11 following a crash for Mick Schumacher. The trip to the pits dropped Norris from being comfortably in the points to 16th and last, but he remained behind all of the drivers yet to pit.

He was therefore dismayed when the race was subsequently red-flagged, which meant those yet to stop could change their tyres during the stoppage without losing time.

“It’s possibly the worst rule ever invented by someone,” Norris told Sky after the race, “being able to change tyres under red flag.”

“It ruined our race today,” said Norris. “It feels like you do so much just to get it all taken away. It sucks because the team did a good job. I thought the car was pretty decent. But it’s just crap, the rule ruins everything.”

The McLaren driver was able to recover a point from his race by keeping out of trouble on the first and second restarts. But it means there has been no result higher than eight for Norris in the final flyaway leg of the season across the Americas and the Middle East.

His team mate Daniel Ricciardo has contributed more than twice as many points to McLaren’s tally during this time after he finished fifth in Jeddah, but Ferrari are comfortably ahead of McLaren in the battle for third in the constructors’ standings.

“It’s still a fun circuit to drive,” added Norris. “But when you feel like you put that much to get one point, I think it’s like my fourth consecutive one-or-two-pointer finish, it’s just hard to take.”

Ricciardo was among those to benefit from the stoppage. “I got unlucky with it, Daniel got lucky with it and finished P5 so I guess there’s a ‘pro’ to it as well,” said Norris. “If both of us boxed, then it would probably be one of the worst days you can imagine.

“I’m happy for my side. I feel like I did a good job when I could and being patient and so on. A lot of people just crashed in front of me for some reason.”

Norris believes Mercedes has cause to feel aggrieved about the situation as well, as Max Verstappen was also able to change his tyres during the first stoppage and jumped ahead of both their cars when he did.

“If Max won because he just got a free pit stop, then I feel like Mercedes would complain,” Norris said. “I don’t know if they would still now or not, because [Lewis Hamilton] won. So it’s just a great day for them. But I just feel like it’s such an unfair thing. They should still have to do their pit stop, they should be more just unlucky rather than getting lucky. Just sucks.”