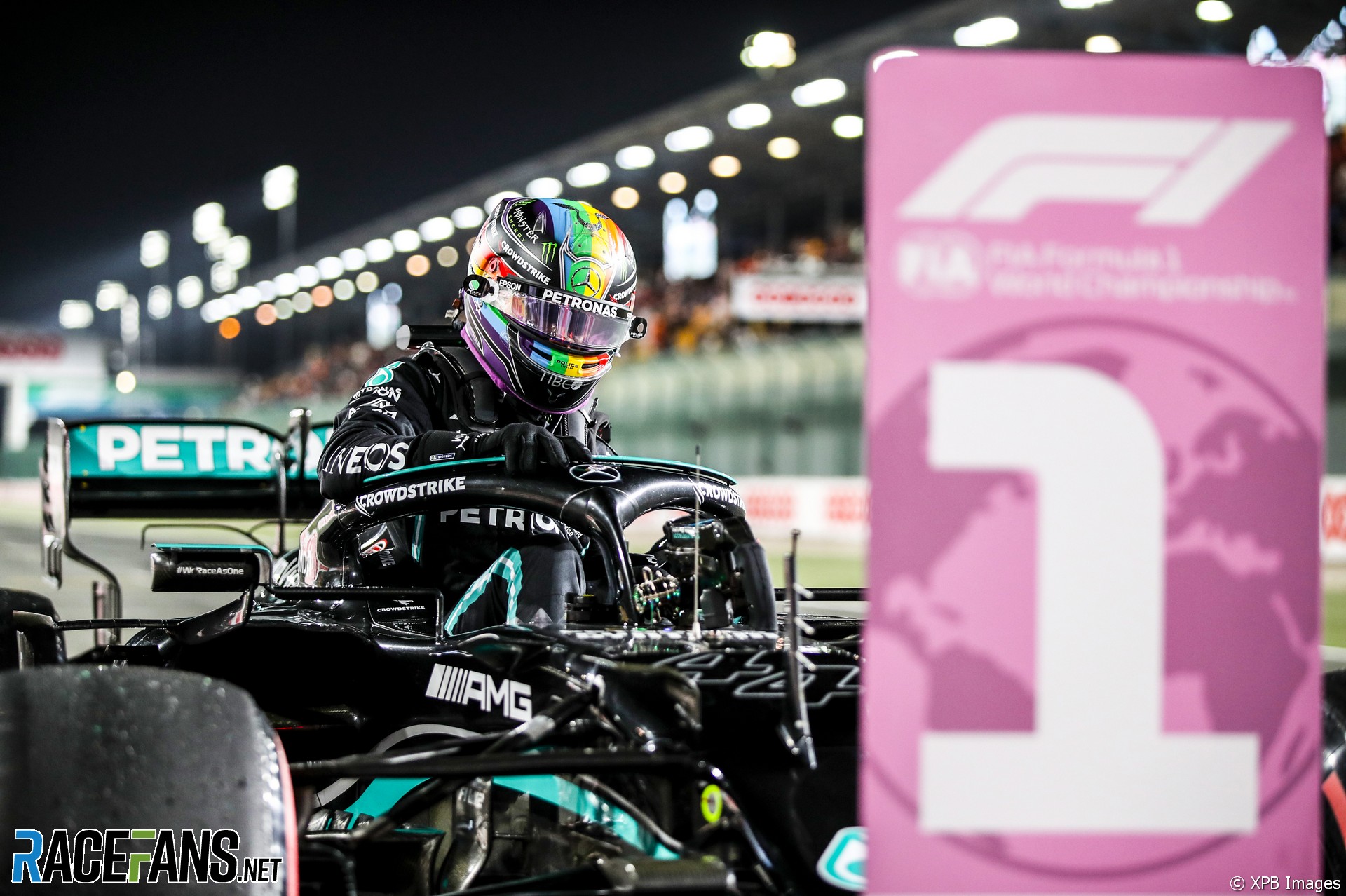 Lewis Hamilton grabbed the pole position for the inaugural Qatar Grand Prix, four-tenths of a second ahead of championship leader Max Verstappen.

The first phase of qualifying began at 5pm under floodlights at the Losail International Circuit.

Nikita Mazepin missed the entirety of second and third practice due to damage and other car problems, so the last thing he needed on his first flying lap was to suffer a damaged front wing endplate caused by a hard hit on the kerbs. Mazepin completed the lap and went back to the garage for a new front wing.

For the other drivers, staying within touch of the kerbs was critical to keep their fast lap times from being deleted for track limits violations. Charles Leclerc sat on the bubble to advance into Q2 after his first fastest lap time was deleted, but he avoided elimination at the expense of Nicholas Latifi.

With rubber being put down on the track, and the track temperature dropping slightly since the start of the session, every team was eager to get their drivers on track at the end of the session. Nearly every driver was queued up at the final sector before setting off, similar to the traffic jams seen in qualifying at Monza.

Both Alfa Romeo drivers fell at the first hurdle. Kimi Raikkonen missed the cut by three-tenths and Antonio Giovinazzi was a tenth slower. They joined the two Haas-Ferraris of Mazepin and Mick Schumacher – who outqualified his team mate by 2.4 seconds – at the back of the grid. Aside from Mazepin, 1.506 seconds covered first to 19th in Q1.

At the top of the table, Hamilton led with a 1’21.901, less than a tenth ahead of Max Verstappen, then Botta. Pierre Gasly, in eighth, was the only driver to set their fastest lap on the medium compound tyres.

Red Bull suffered a blow in Q2 as Sergio Perez failed to accompany his team mate into the top 10 shoot-out. Both drivers went out on the medium compound tyres in an effort to ensure a strategic advantage in the race. Mercedes, Ferrari and McLaren did likewise, though only Mercedes got both their drivers into Q3.

After the first set of flying laps, Hamilton was quickest on the medium tyres with a 1’21.682, but Gasly went second quickest on the softs, ahead of Verstappen on the mediums. The close gaps between the times led even the quickest teams to send their drivers out for soft tyre runs at the end in case they needed to improve.

Alpine and Aston Martin opted for the soft compound tyres. Fernando Alonso and Esteban Ocon pushed their way above the cut line on their first runs, as did Sebastian Vettel and Lance Stroll. They pushed the likes of Sergio Perez and Lando Norris out of the top 10, with Charles Leclerc unable to figure out where he was missing nearly a second of pace after his first run.

With just three minutes left, Hamilton was sent out on the soft tyres for his final time attack – and the Red Bulls of Verstappen and Perez followed suit, along with Leclerc, and the McLarens of Norris and Daniel Ricciardo. Bottas stuck with the medium tyres to try for a significant strategic advantage in the race, as did Carlos Sainz Jnr.

Leclerc and Ricciardo were unable to bump their way back into the top ten on their last laps. Sainz was unable to improve on his second run on the medium tyres – but Perez lost out in the final sector and could only go 11th fastest.

Joining Perez, Leclerc, and Ricciardo on the wrong side of the cut line were Lance Stroll and George Russell.

The final stage of qualifying commenced with all 10 remaining drivers on track; Hamilton, Bottas, and Verstappen went out on new sets of soft tyres that they’d saved, while the likes of Norris, Ocon, Sebastian Vettel, and Yuki Tsunoda went out on used sets.

Hamilton set the early benchmark with a 1’21.262, ahead of Bottas with a 1’21.478. Verstappen set a fastest first sector, but even with the higher downforce rear wing that his Red Bull crew installed after third practice, he could not displace Hamilton from the top spot on his first run – just 0.162 seconds behind.

Gasly stood as the best of the rest after the first set of time attacks. And Fernando Alonso, who finished Q2 in third place, went fifth-fastest as the Alpines continued their improvement from the start of the weekend.

Every driver had a new set of soft tyres stuck on for their final flying laps. Verstappen had more front wing angle added in the interim, and was set to be the last driver over the line when the chequered flag fell – with Hamilton being first in the order.

Hamilton set blistering first and second sectors and completed a sensational lap with a time of 1’20.827, fastest across all three sectors.

Moments later, Gasly hit the exit kerb hard, breaking the front wing and causing a right front puncture. The AlphaTauri began to spit rubber and debris on track, and eventually came to a stop on the front stretch.

Yellow flags were briefly shown in two marshalling sectors but withdrawn as the final drivers came to the line. Verstappen improved his lap time marginally, but not by enough to displace Hamilton from the top spot, as the reigning seven-time world champion became the first Formula 1 pole winner in Qatar.

Bottas held onto third and will hold a strategic advantage as he starts the race on medium tyres. Gasly held onto fourth place despite the yellow flags, ahead of Alonso in fifth. Norris, Sainz, Tsunoda, Ocon, and Vettel completed the top ten in that order.