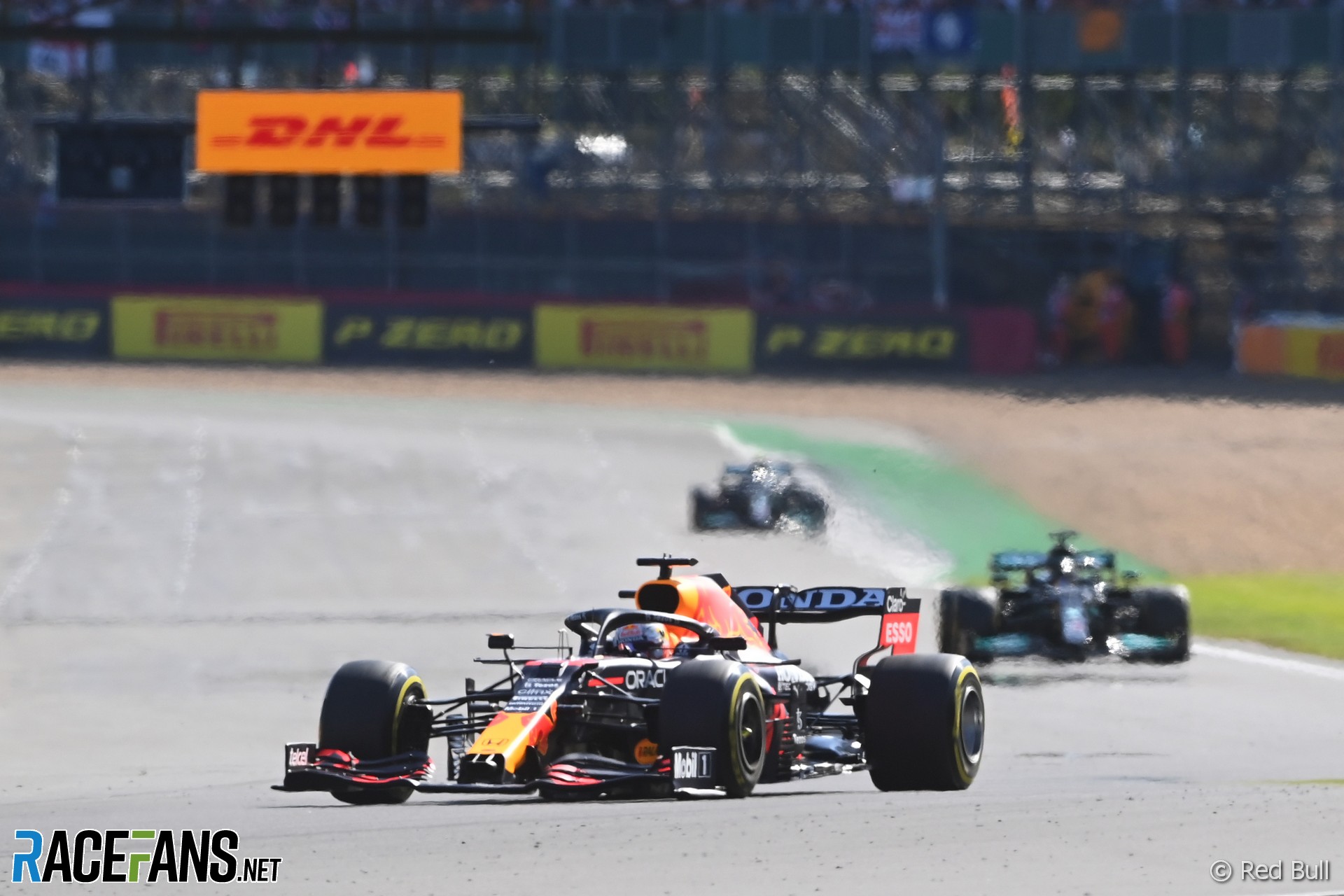 Unusually, we’ve already had a chance to see the drivers racing ahead of today’s British Grand Prix.

The sprint qualifying format means that, while the same two drivers will line up on the front row as they did yesterday, the pair have switched sides.

Lewis Hamilton took the top grid spot for sprint qualifying but Max Verstappen beat him to turn one. He remained ahead for all 17 laps of the new format, earning pole position for the British Grand Prix.

This was despite Red Bull making a set-up choice which has seen them trade away the straight-line speed advantage they have enjoyed in recent rounds.

“I think what we learnt today is it’s very close again,” said Verstappen yesterday. “It’s a bit different, it seems like we are quite quick through corners, they are quick on the straight this weekend.

“And of course, after only one practice session and then you’re not allowed to make any changes and you don’t hit it right then it’s stuck, so we [are] stuck on the straight. So that’s why we have to make up our time in the corners.”

Hamilton’s best opportunity to regain his lost lead may come at the start of the race. But he said yesterday Mercedes have had lost some performance at the start compared to their rivals. It remains to be seen if that is something they can address overnight.

Mercedes’ efforts to deny Verstappen another win have been boosted by Sergio Perez’s struggles. A spin during sprint qualifying left him at the back of the field and led Red Bull to retire his car during the final lap. The two RB16Bs will therefore bookend the field, and it will take an enormous stroke of fortune for Perez to aid Verstappen in his fight with the Mercedes.

As was also the case yesterday, drivers have a free choice of which tyres to start on. Mercedes chose to split their drivers’ strategies yesterday and could do so again today.

Pirelli predict that starting on a medium tyre, running for between 18 and 25 laps and then transferring to a hard tyre will be the quickest strategy. However by putting one of its cars on mediums and the other on hards, Mercedes could give themselves the opportunity to attack Verstappen two ways, one car running longer and the other pitting earlier.

Perez’s problems means Charles Leclerc will line up fourth again and will be entertaining the hope of finishing there are a surprisingly competitive run for Ferrari yesterday. The Scuderia have been rapid at street circuits but Silverstone was expected not to suit their cars, being a front-limited circuit similar to Paul Ricard where they were in all kinds of trouble.

However Leclerc was able to match Valtteri Bottas on pace during sprint qualifying. The Ferrari driver admitted he didn’t expect this development, even as the Mercedes driver faded on a set of soft tyres.

“It was quite busy at the beginning, but then it was actually quite lonely for me, but in a positive way,” said Leclerc. “We managed to stay very close to Bottas in front, more or less the same pace, which is something that surprised us a little bit.”

Ferrari’s contest with McLaren over third in the constructors’ championship remains fierce. Both McLaren cars will start the British Grand Prix immediately behind Leclerc, while Carlos Sainz Jnr trailing them after a first-lap incident sent him down the order during sprint qualifying. If the two, starting in fifth and sixth, can pass Leclerc and hold position then they will gain a huge advantage over Ferrari – on the other hand, if Leclerc can keep them behind, with the pace he showed during sprint qualifying, and Sainz can catch up then there will be a truly fierce battle for the ‘best of the rest’ places.

However the assumption that the race will run to a typical one-stop strategy could be disrupted by the weather. Silverstone is experiencing a mini-heatwave this weekend, with the mercury nudging 30C. Fernando Alonso, who attacked yesterday’s sprint qualifying race on a set of soft tyres, predicted tyre management could be a bigger factor than many expect.

Will Hamilton use his home advantage to end Red Bull’s winning run? Who will come out on top between Ferrari and McLaren? And how many points can Perez salvage from the back?

Share your views on the British Grand Prix in the comments.