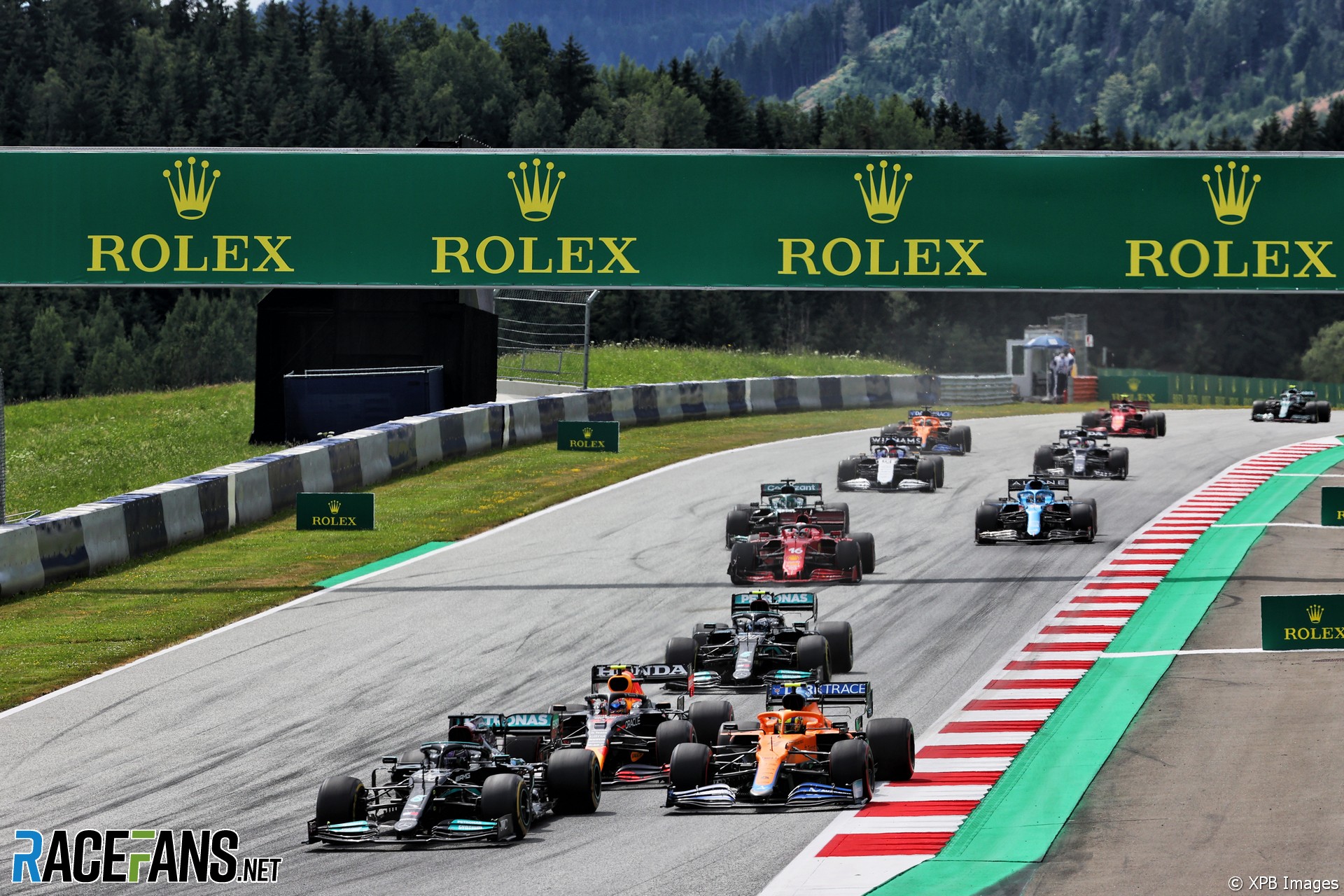 Formula 1’s second successive weekend at the same circuit won’t necessarily follow the storylines of the first, or even see the domination of Red Bull’s Max Verstappen continue.

Here are the talking points for the second of the two back-to-back races at the Red Bull Ring – the Austrian Grand Prix.

Will softer tyres make for a different race?

The pandemic has led to the unusual situation of the same circuit holding two grands prix, but that occurred at three separate tracks in 2020 (including Bahrain where two different layouts were used) and one of those venues was the Red Bull Ring.

The other was Silverstone, where Pirelli’s efforts to prevent a repeat result for fans saw them bring different compound tyres to the two race meetings. They started with the harder offerings of rubber, then gave teams the softer options for the follow-up race.

Aside from punishingly hot temperatures at Silverstone, a contributing factor to Mercedes’ drivers having their tyres spectacularly go in the closing laps of the British Grand Prix, there wasn’t too much difference in how the race played out at the front when the softer tyres were made available for the F1 70th Anniversary Grand Prix that followed, nor between the Red Bull Ring races a few weeks prior.

With such limited development of the cars since then, besides reduced levels of rear downforce imposed by regulation changes that restricted what teams could do with the floor area, it’s unlikely we’ll get a very different Austrian Grand Prix compared to the Styrian Grand Prix.

Because Austria opened the season last year, the racing was a little more frantic and as a result there were safety car interruptions, but most of that had died down by a week later. Last weekend’s race was a rather processional affair, particularly at the front of the field, where the top two places never changed hands.

It’s possible that the one-stop strategy will become less favourable than the two-stop for Red Bull and Mercedes now the C5 tyre will be available, but given they’re likely to have a huge advantage over everyone else regardless, is that even going to make traffic after pit stops an issue for them if the midfield goes for the same strategy?

It may however be what Mercedes needs to bounce back against Red Bull and end their four-race winning streak.

Williams’ wait for points goes on

For the first third of the Styrian Grand Prix, George Russell was on course to take his first points as a Williams driver. After the halfway point of the race, he was sitting in the team garage after a pit stop lasting several minutes and wondering how a power unit issue had put him out of a race his team had looked genuinely competitive in.

Williams were considerably closer to the qualifying pace at the Red Bull Ring compared to the two visits made last year, and it was their most competitive showing at the circuit since 2016 when Valtteri Bottas was 1.03% slower than the pole lap. Russell was 1.30% off the pace last Saturday and matched his best qualifying result at the team in 11th place.

His 24-lap opening stint in eighth was the longest spell a Williams car has spent in a points-scoring position since last year’s Tuscan Grand Prix at Mugello, where he also ran as high as eighth and spent 36 laps in the top 10, and with each race that teases a points finish but somehow snatches it away Russell has got used to the frequent need to bounce back from disappointment.

So there’s no doubt mentally he’ll be on top form again this weekend, and the car fundamentally shouldn’t be any less competitive than it was days ago. But the use of a softer tyre compound may be the sticking point here, particularly if the Austrian GP is a two-stop race, as Williams hasn’t looked strong on Pirelli’s softest tyre, the C5, which was used in Monaco and Baku.

Fernando Alonso, who had Russell in close company last weekend, expects them to be competitive again. “He was also really fast on Friday in the Williams,” he said. “I think they were 11th last year as well in Austria.

“So it seems that they are generally fast in this circuit. So I was expecting a strong race from them. Unfortunately, he had to retire. But next weekend I expect Williams again to be to be very close to us.”

The variation of teams’ strategies in Friday practice makes it difficult to draw reliable pictures of who will be quickest come qualifying the next day, and that will be even more the case than usual this weekend as Pirelli brings new rear tyres for all teams to use.

During the Azerbaijan Grand Prix there were two blow-outs for drivers using the C3 medium compound tyre. New restrictions on tyre use arose from that, which have been in force for two races, but now Pirelli has brought a revised construction of the rear tyre for testing. Two sets will be supplied to each team for use in the first two Austrian GP practice sessions.

“This decision has been taken in addition to the recently issued technical directive and the latest starting parameters prescribed by Pirelli, in light of the fact that it is not currently possible to monitor running conditions in real time,” said Pirelli in a statement.

It’s not clear what performance differential the revised compound will have, if any, but by running it during practice it reduces teams’ time on the C5 tyre that’s only been used on street circuits so far in 2021. And the two Friday sessions this year are only each an hour long.

As the C5 is the likely starting tyre for many of the midfield teams that wouldn’t be confident enough to get through to Q3 on the C4 soft, the data deficit from Friday could lead to a really exciting Saturday practice session and then a mixed up qualifying – particularly as we don’t yet know the minimum tyre pressures for this event.

If the trial is successful, then it is planned for the revised construction to be brought to the British GP along with the unchanged front tyres to be used in the grand prix. Silverstone is one of the most demanding tracks on the calendar for tyre use, and has been the scene of many of Pirelli’s tyre failures in the past, an issue it wants to prevent.

Having two races at the same circuit gives everybody in the paddock a rare opportunity to get to the bottom of problems and then try out their solutions on the same asphalt rather than at a completely different and even irrelevant track.

Esteban Ocon’s failure to progress past Q1 last time out and another mystifying performance for Daniel Ricciardo in qualifying make those two the drivers under the biggest pressure – but also with the greatest opportunity – to turn things around this weekend.

Ocon needs to ensure his car feedback is as precise as possible on Friday morning, as the team relies on him for information while Alpine team mate Fernando Alonso hands over his car to Formula 2 points leader Guanyu Zhou to make his F1 practice debut.

Alonso finished ninth in the Styrian GP and was convinced he “could have done much better” than that position, and if it really was the maximum that Alpine could get out of their car then that certainly gives Ocon a barometer to see what he can do to bring himself up to that pace. However Alonso teased “we have something in our head to improve the performance of the car” for this weekend.

Finishing not far behind Alonso was AlphaTauri’s Yuki Tsunoda, who along with Haas duo Nikita Mazepin and Mick Schumacher will be greatly appreciating the chance as F1 rookies to measure their own rate of improvement by having two Red Bull Ring races, and Zhou isn’t the only practice one stand-in as 2020 F2 title runner-up Callum Ilott drives for Alfa Romeo and Roy Nissany is in again at Williams.

Ricciardo’s Styria race was compromised by traffic and a power unit control system glitch, but he also had the same driving problems he has been dealing with since joining McLaren this season. He’s worked hard with the team, but simple differences like not getting through to Q3 as frequently as Norris does compromises both his race strategies and the work he can do on setting up the car for single-lap pace.

Having more time to focus on that this weekend will be a huge help, particularly as his race pace clearly merited a better result.

Will the rain which was repeatedly tipped but failed to materialise last weekend finally arrive?

After a very warm mid-week, significantly cooler air will move into the Spielberg later this week and make the cars higher (no pun intended) performing machines in the Styrian Alps.

It will minimise the loss of engine performance that occurs at altitude, and change the game when it comes to putting temperature into the tyres and then managing them over a race distance. More power, more downforce and more grip not only means faster lap times but also less sliding, so better tyre management.

On the C3 tyre being used at both Red Bull Ring races, Ricciardo and Ferrari’s Carlos Sainz Jnr were able to go 41 laps before pitting in the Styrian GP, and while such a lengthy stint would be under consideration by more drivers now, it might get overlooked anyway at the Austrian GP if the cooler conditions enable drivers on the faster C5 tyre to run for longer.

Are you going to the Austrian Grand Prix?

If you’re heading to Austria for this weekend’s race, we want to hear from you:

Who do you think will be the team to beat in the Austrian Grand Prix? Have your say below.